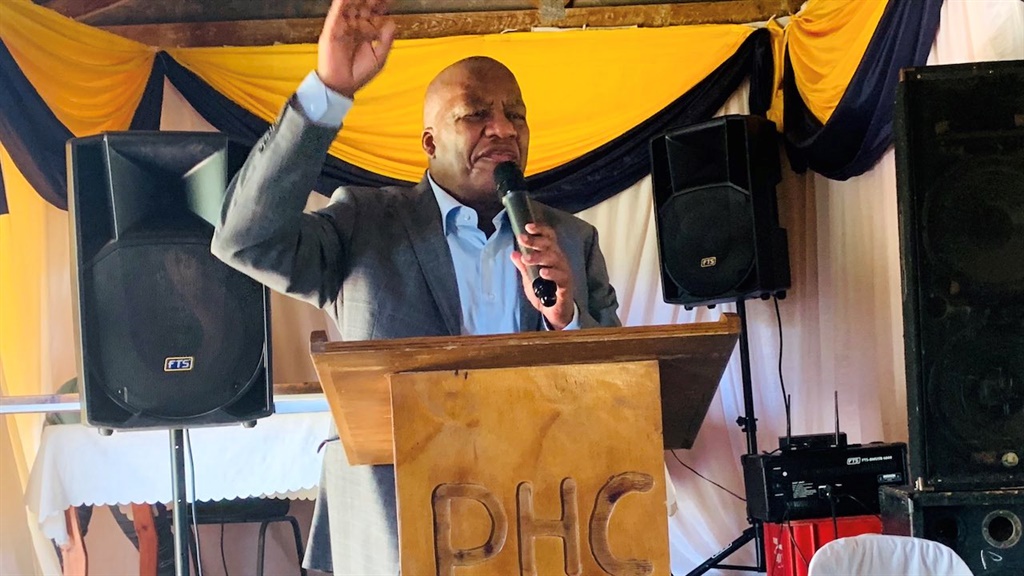 One of the photos posted to Twitter by cabinet minister Jackson Mthembu.

Minister in the Presidency and ANC national executive member Jackson Mthembu on Sunday posted photos that show at least three different lockdown rules being broken as he addressed a church in Mtubatuba.

Mthembu was at the church for a political event.

"Today we visited the Pentecostal Church in Mtubatuba. We introduced our ward candidate, comrade Njabulo Thusi, for the November by-elections. Victory is certain #voteANC," he said in a tweet, attaching four photos of his address.

The photos show Mthembu speaking without a mask, even though he is using a microphone, while churchgoers sit packed close together just in front of him.

The photos appear to show only a part of the church hall, but at least 45 people can be seen. That is well below the limit for religious gatherings – but churches are required to admit only as many people as take up 50% of the available floor space.

While it is not clear if that rule was technically adhered to, three others are clearly being broken.

The rules apply not only to religious gatherings, but to people who enter a place of worship, for instance for a political event.

In April this year Mthembu became the acting minister of communications after his cabinet colleague, Stella Ndabeni-Abrahams, was placed on special leave. She had broken lockdown regulations.

Related Links
ANALYSIS | NDZ just triumphed over tobacco – and became all but legally untouchable
Everything you need to know about Stella Ndabeni-Abrahams
You are legally required to report a neighbour with the coronavirus in South Africa
Next on Business Insider
From tomorrow, FNB will give you another R2 per litre back on fuel – but you need a virtual card