The Delta variant is fuelling school outbreaks in Israel, leading the country's cases to tick up A boy receives the Pfizer COVID-19 vaccine in the Israeli city of Holon, near Tel Aviv, on June 21.
Jack Guez/AFP/Getty Images

On Monday, Israel recorded its highest daily coronavirus tally in two months: 125 new cases, up from around 15 cases at the start of the month.

The Delta variant seems to be to blame: Emerging research suggests that Delta is more transmissible and possibly deadlier than any other coronavirus strain so far. So less than a month after Israel lifted its remaining coronavirus restrictions, the country announced that vaccinated people can be told to quarantine if they've been exposed to that variant.

Delta represents around 40% of Israel's coronavirus cases over the last four weeks, according to the Global Initiative on Sharing Avian Influenza Data. Israel's health ministry reported that 70% of the 125 new infections recorded on Monday were caused by the Delta variant. Roughly one-third of those new infections were among vaccinated individuals, the ministry said, and half were among children.

Indeed, many of these new cases have been traced to school outbreaks. But disease experts are more worried about kids spreading the variant than getting severely ill themselves.

So even if you doubled children's risk of being hospitalized from a Delta infection, it would still be "minuscule," according to Eyal Leshem, an infectious-disease specialist at Sheba Medical Center, Israel's largest hospital.

However, children can spread the virus to unvaccinated adults, or perhaps to people who might see a less robust immune response to vaccines - like the elderly or immunocompromised.

Israel is trying to preempt another outbreak

Israel's schools fully opened in May, masks are no longer required indoors or outdoors, and mass gatherings have been taking place across the country. But the country just started vaccinating kids ages 12 to 15 earlier this month, so only 2% to 4% of that age group has been immunized so far. In televised remarks on Tuesday, Prime Minister Naftali Bennett urged Israelis to "vaccinate your children."

Israel's new restrictions go beyond quarantines: Health minister Nitzan Horowitz told the Israeli Parliament on Wednesday that any residents who travel to a high-risk country - Argentina, Brazil, South Africa, India, Mexico, or Russia - could be fined "thousands of shekels." (One-thousand shekels is around $308.) Masks will also be required at airports, border crossings, and medical facilities.

"What I guess they're doing is trying to first provide more conservative or restrictive recommendations, see the [epidemiological] curve, see what impact this has, and then loosen the restrictions rather than be more liberal about restrictions and then face 10,000 cases a day," Leshem said.

In one to two months, Leshem added, public-health experts could have a better idea of Delta's effects.

"We're all still observing Israel as a case study of what's going to happen in a country where 90% of the population at risk is already vaccinated," he said, referring to the number of adults who have gotten their shots.

"If we see Israel reaching several hundreds of cases a day, even thousands of cases, but we don't see a substantial increase in the number of severe cases and hospitalizations, then the public-health angle would be to restrict normal life as little as possible," he added.

Some infections among vaccinated people, experts say, can't be avoided.

"Surely there will be cases of breakthrough infections among vaccinated people and further transmission," Dr. Hagai Levine, an epidemiologist at the Hebrew University-Hadassah Medical Center School of Public Health, told Insider. "We need to find the right balance, as quarantine to vaccinated people is a burden." 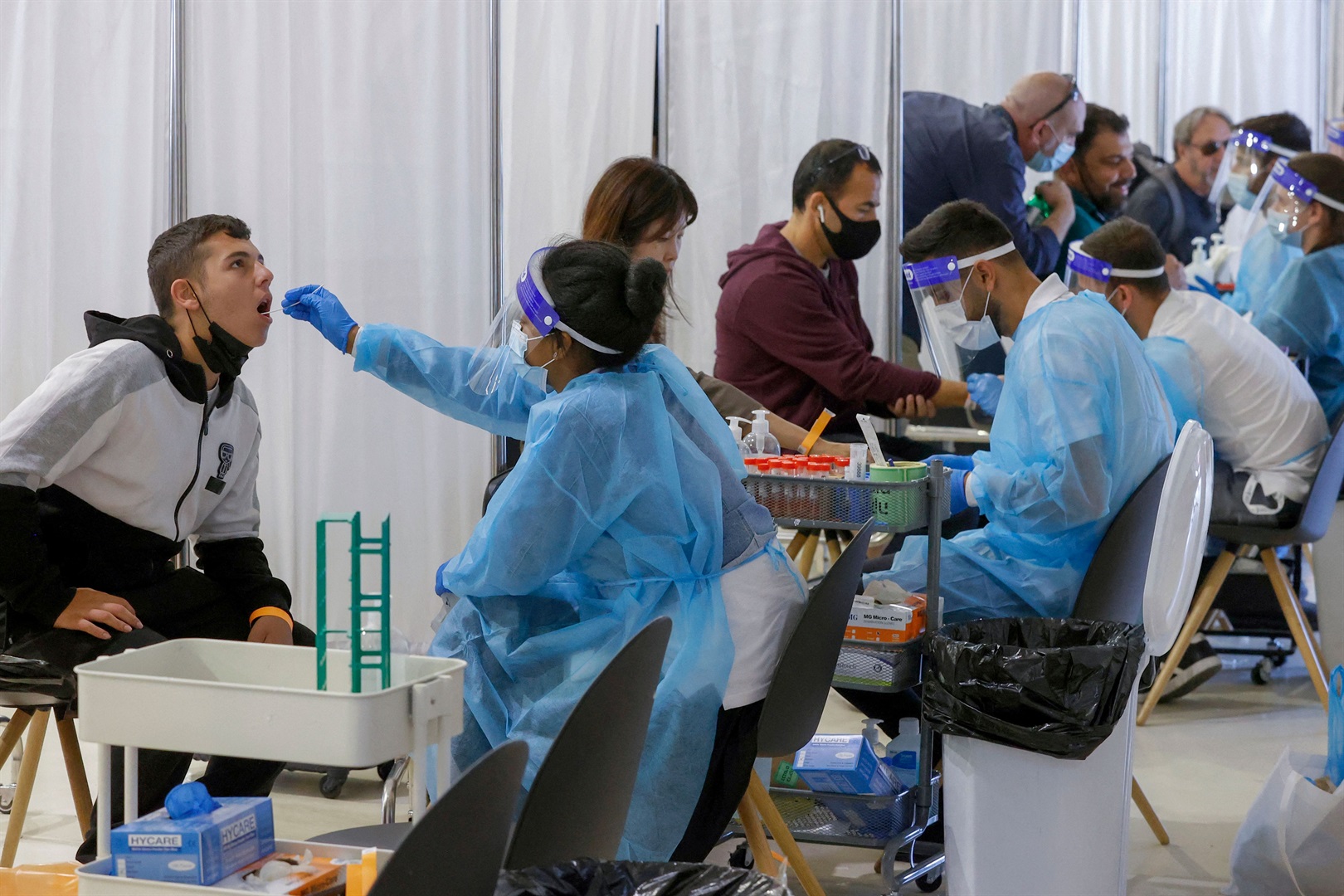 Israelis and vaccinated tourists get tested for COVID-19 upon arrival to Israel's Ben Gurion airport near Tel Aviv on May 23.
Jack Guez/AFP/Getty Images

An analysis from Public Health England found that Delta is associated with a 60% increased risk of household coronavirus transmission compared to Alpha, the variant discovered in the UK. Alpha is already around 50% more transmissible than the original strain, according to the Centers for Disease Control and Prevention.

Researchers in Scotland also found that getting infected with Delta doubles the risk of hospital admission relative to Alpha. (Previous studies have suggested that Alpha may be 30% to 70% deadlier than the original strain.)

What's more, emerging research suggests that a single vaccine dose doesn't hold up as well against Delta as it does against other coronavirus strains: Recent Public Health England analyses found that two doses of Pfizer's vaccine were 88% effective at preventing symptomatic Covid-19 from Delta, while a single shot was just 33% effective. That's compared to 95% efficacy against the original strain, with 52% after one shot.

Young people increasingly represent the majority of new coronavirus cases not just in Israel, but around the world.

The Scotland researchers found that Delta cases were more prevalent among younger age groups. And a study still awaiting peer review found that coronavirus infections in the UK are five times more prevalent among children ages 5 to 12 and young adults between 18 and 24 than among those above 65. Most young people who recently got infected were unvaccinated, according to the study.