Map showing the discrepancies between the US and Iranian accounts of where a drone was shot down. Inset: A US Navy MQ 4C Triton drone. Iran said it shot down an RQ-4A Global Hawk drone.
Google Maps/Business Insider; US Navy/Northrop Grumman/Bob Brown/Handout via Reuters

Iran's Revolutionary Guard said on Thursday morning it shot down a US Navy drone, to make clear its position that "we are ready for war".

However, Iran and the US sharply differ over whether Iran had any right to take action, based on a technical argument over whose airspace the aircraft was in.

The Guard's website, Sepah News, said it shot down a "spy" drone when it flew over the southern Hormozgan province, located by the Gulf, Reuters reported.

Gen. Hossein Salami, the commander of Revolutionary Guard, said in a televised speech on Thursday that the drone-shooting sends "a clear message" to the US not to attack Iran.

He said that Iran does "not have any intention for war with any country, but we are ready for war," according to the AP.

Iran's foreign ministry has also accused the US of "illegal trespassing and invading of the country's skies."

"Invaders will bear full responsibility," a statement said, according to the AP.

The head of Iranâ€™s Islamic Revolution Guards Corps (IRGC) Hossein Salami has said that the downing of a US surveillance drone clearly shows Iran's will to stand against foreign aggression. His speech was broadcast live by English-language Press TV. pic.twitter.com/a1L8O1yKjv

The US has, however, denied flying any aircraft over Iranian airspace.

It said instead that a US Navy drone - a RQ-4A Global Hawk - was shot down in international airspace in the nearby Strait of Hormuz.

"US Central Command can confirm that a US Navy Broad Area Maritime Surveillance (or BAMS-D) ISR aircraft was shot down by an Iranian surface-to-air missile system while operating in international airspace over the Strait of Hormuz at approximately 11:35 p.m. GMT on June 19, 2019.

"Iranian reports that the aircraft was over Iran are false.

"This was an unprovoked attack on a U.S. surveillance asset in international airspace." 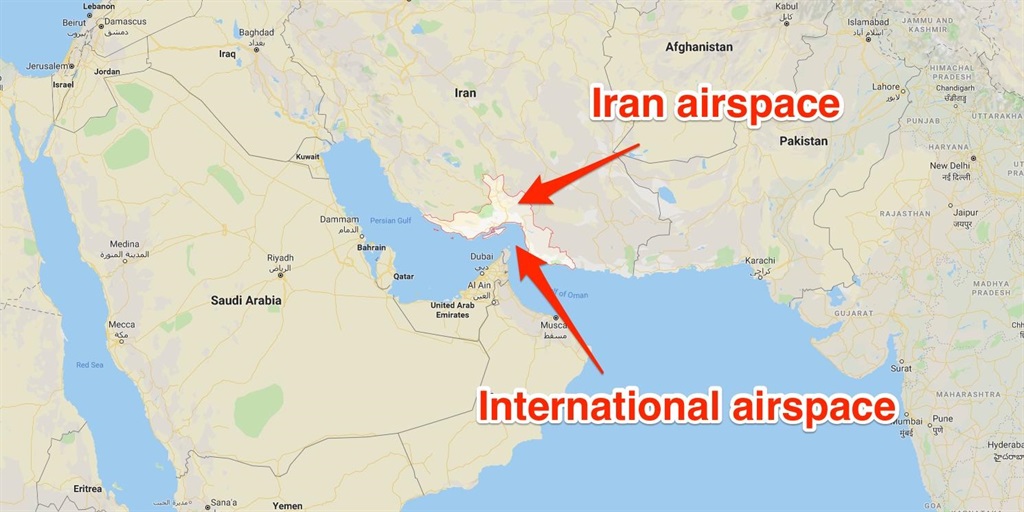 Map showing the southern Hormozgan province in Iran, where Iran says a US drone had entered when it got shot down; and international airspace over the Strait of Hormuz, which US officials say a Navy drone was shot down.
Google Maps/Business Insider

If the US drone was flying in international airspace, Iran had no right to attack it.

Gen. Paul Selva, the vice-chairman of the Joint Chiefs of Staff - the US's second-highest-ranking general - said earlier this week that the US would be able to justify a military attack on Iran if it attacked "US citizens, US assets, or [the] US military".

"If the Iranians come after US citizens, US assets or [the] US military, we reserve the right to respond with a military action, and they need to know that," Selva said, as cited by Business Insider's Ryan Pickrell.

But he said at the time that the Iranians "haven't touched an American asset in any overt attack that we can link directly to them".

Read more: The US has been privately telling Tehran that it will attack if Iran makes this one wrong move

Tensions between the US and Iran ratcheted up in recent weeks after the US accused Iran of attacking an oil tanker in the Gulf of Oman two weeks ago.

Iran last week retaliated by saying it will exceed the limits on its enriched uranium stockpile as agreed in the 2015 nuclear deal signed under former President Barack Obama's administration, from which President Donald Trump withdrew last year.

Read more: Here's what's in the landmark nuclear deal that Iran is starting to walk away from, amid tensions with Trump

The hawkish Revolutionary Guard is a powerful force within Iran's ruling class, and tends to favor an aggressive foreign policy. President Donald Trump's administration has signaled willingness to go to war with Iran in recent days.

Secretary of State Mike Pompeo has made the case that the US might be able to attack Iran under a law originally passed to allow then-President George W. Bush to punish those deemed responsible for the September 11, 2001, terror attacks.

Both Republican and Democratic lawmakers are resisting the White House's use of that act to justify action against Iran.