TAKE A LOOK | Inside Joe Biden’s new home, with 132 rooms and its own restaurant Welcome to the White House, the most famous home in America, where Joe Biden is due to live for the next four years. It is located at 1600 Pennsylvania Avenue in downtown Washington DC between the US Treasury and Eisenhower Executive Office Building. The massive building contains three connected but distinct sections: the West Wing, the East Wing, and the Executive Residence in the middle. All have their own entrances. Then-President Barack Obama and Then-Secretary of State Hillary Clinton walk into the Entrance Hall of the White House on February 23, 2011.
Chip Somodevilla/Getty Images

The West Wing contains some of the most notable rooms in the White House. A Marine stands guard outside of the West Wing of the White House on January 18, 2021.
Mandel Ngan/AFP/Getty Images

Among them is the Oval Office, the president's main office. It is the president's formal workspace, where he meets or takes calls with with heads of state, diplomats, and his staff. Close-up of the Resolute Desk with Former President Trump in the background.
Brendan Smialowski/AFP/Getty Images

The Oval Office is home to the famous Resolute Desk, which dates back to the 1800s and weighs over 1,000 pounds.

There are also several paintings, busts, and other decorations. Presidents decorate the office to their personal taste. The West Colonnade walkway, also referred to as the "45-second commute" by insiders, leads from the Oval Office to the Rose Garden and to the official residence. The Cabinet Room is where the president meets with his ministers. It's customary for the president to sit near the centre of the table. Then-President Donald Trump presides over a meeting members of Congress in the Cabinet Room on January 9, 2018.
Chip Somodevilla/Getty Images

On the ground floor is the Situation Room, a complex where the president receives intelligence and crisis support. The Situation Room is run by staff from the National Security Council.

Also on the ground floor is a restaurant run by the US Navy known as the Navy Mess and Ward Room. The Mess dining facility is run by the US Navy.
White House

Another famous West Wing room is the Roosevelt Room. The meeting space is often used to announce appointments and nominations of new staff members. It features paintings of both Theodore and Franklin D. Roosevelt. The office of the vice president is located on the second floor of the West Wing. The Executive Residence building is where the First Family lives and sleeps. The South Portico of the Executive Residence on March 20, 2009.
Saul Loeb/AFP/Getty Images

On the first floor is the Red Room, which serves as a parlour or sitting room for the president and dignitaries. 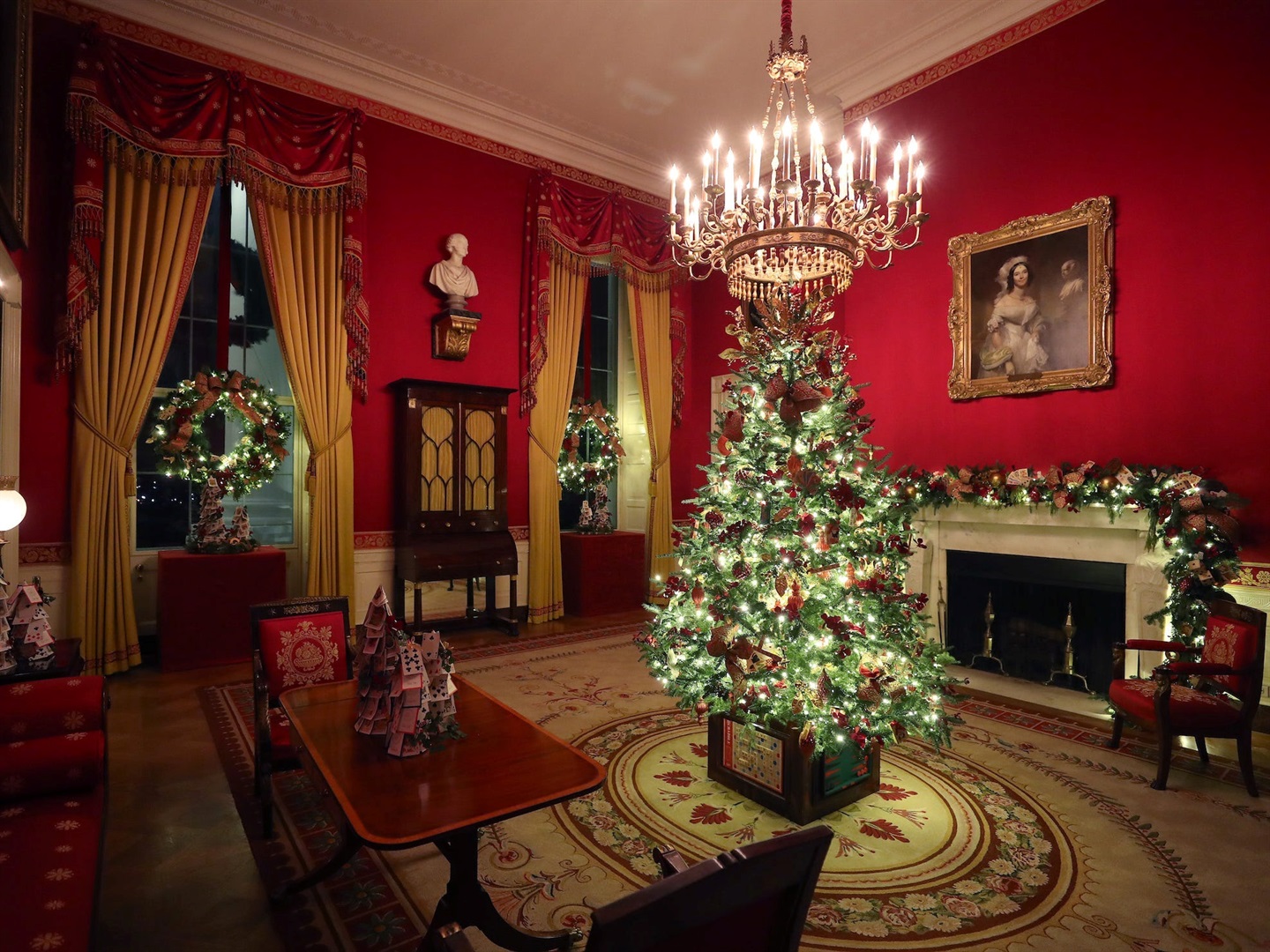 The Red Room decorated for the holidays.
Mark Wilson/Getty Images

The East Room is the largest room in the Executive Residence. It is used for speeches, ceremonies, concerts, receptions, and dances. Then-President Donald Trump speaks to a group of mayors in the East Room on January 24, 2018 in Washington, DC.
Chip Somodevilla/Getty Images The East Wing next door is home to the Office of the First Lady and White House Private Secretary. Then-First Lady Laura Bush takes Michelle Obama for a private tour of the artwork in the East Wing on January 20, 2009.
Charles Ommanney/Getty Images

It also contains the family theatre, where presidents and their families can see any movie they want at any time of the day - even before they come out in theatres. Then-President Barack Obama welcomes service members and their families to a screening of Men in Black 3 in the Family Theater on May 25, 2012.
Pete Souza/The White House/Getty Images

Beneath the East Wing is one of the White House bunkers, where Then-Vice President Cheney and White House officials sheltered during 9/11. Editor's note: This is an updated version of an article originally written by Amanda Macias.