Producing 11,000 litres of milk a day and supplying it to Nestlé, a leading global food producer, was a far-fetched idea for the Springfontein dairy farm, which started out just producing 800 litres a day and primarily for their own consumption.

The farm, situated in the Swartberg, a far-flung rural area near Kokstad in southern KwaZulu-Natal, Springfontein, is a community dairy owned by the people of the Makhoba Trust, who were previously displaced from their land in 1964.

Upon resettling on their land in 2002, the community relied on subsistence farming until the intervention of Nestlé in 2008. The food producer worked together with Inyosi Empowerment, the community of Makhoba (led by Chief Ambrose Makhoba), and other entities in the farming and agriculture fraternity to develop the dairy farm.

Today, Springfontein produces milk on a commercial level, supplying Nestlé with four million litres of milk every year. The farm started out with 150 cows and has managed to grow its herd to more than 500 cows. The farm started with a headcount of 12 employees, which has grown to 35 currently.

We visited the farm to see what goes into the milk-making process.

The milking cows are put on a rotational parlour, about 60 of them per cycle. Each animal is tagged on one of its ears, which sends a signal to the farm's system that has information about each cow's lactation details. The signals also help indicate the amount of feed each cow requires. 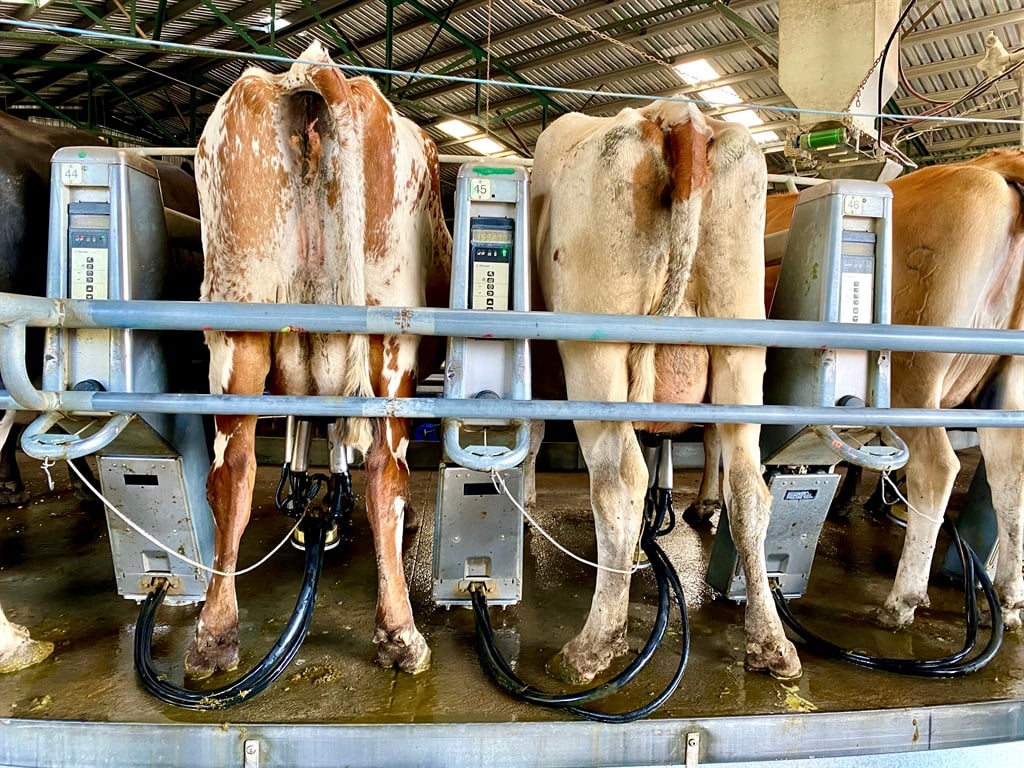 On the rotary parlour, dip is applied to cow's teets which carries numerous benefits for the cows, such as controlling any bacteria that may have been picked up on the grazing fields. It also stimulates the teets and udder to let down the milk.

The clusters are latched onto the teets, where the cow will begin releasing the milk. The milk is then piped from the clusters to the factory's bulk tank. Clusters are attached to the teets which milk the cows. (Image: Business Insider SA/Ntando Thukwana)

The clusters are linked to a flow monitor that tells the dairymen when the cows have stopped releasing milk, and the clusters are removed from the udders.

To ensure the milk is of supreme quality, it is let out from the cows' udders at a body temperature of roughly 35°C. It is regulated down to 4°C as quickly as possible to curb bacterial growth.

The milk travels through an ice bank tank system that brings it down from 35°C through one pipe to below 4°C through a different pipe. The milk's cold chain systems brings the temperature down to below 4°C from 35°C. (Image: Business Insider SA/Ntando Thukwana) The milk travels through two pipes, one letting through body temperature milk and the other regulated to keep it below 4°C. (Image: Business Insider SA/Ntando Thukwana)

The milk is stored in a tank room with two 18,000 litre capacity tanks, keeping the milk below 5°C. "There's one goal and rule in milk quality: and that is to keep the cold chain. You don't want a slip in the cold chain then you see bacterial growth," Hoven Meyer, head of agricultural services for Nestlé East and Southern African Region (ESAR), said.

"The Nestlé tanker is also an isolated tanker… with thick isolation sidewalls. There, the cold chain is again in place, it will be kept below 5°C all the way, right to the point of processing, and then it will go to manufacturing," said Hoven. Legally, the milk can only stay in the farm chilling tanks for 48 hours. A suction pipe from the tanker trunk is connected to the tanks in the tank room at collection. The milk is piped from the factory's chilling tanks to the Nestle collection truck. (Image: Business Insider SA/Ntando Thukwana) The suction pipe from the truck's tank is attached to the farm's chilling tank. (Image: Business Insider SA/Ntando Thukwana) The milk is tested and sampled before collection. (Image: Business Insider SA/Ntando Thukwana) 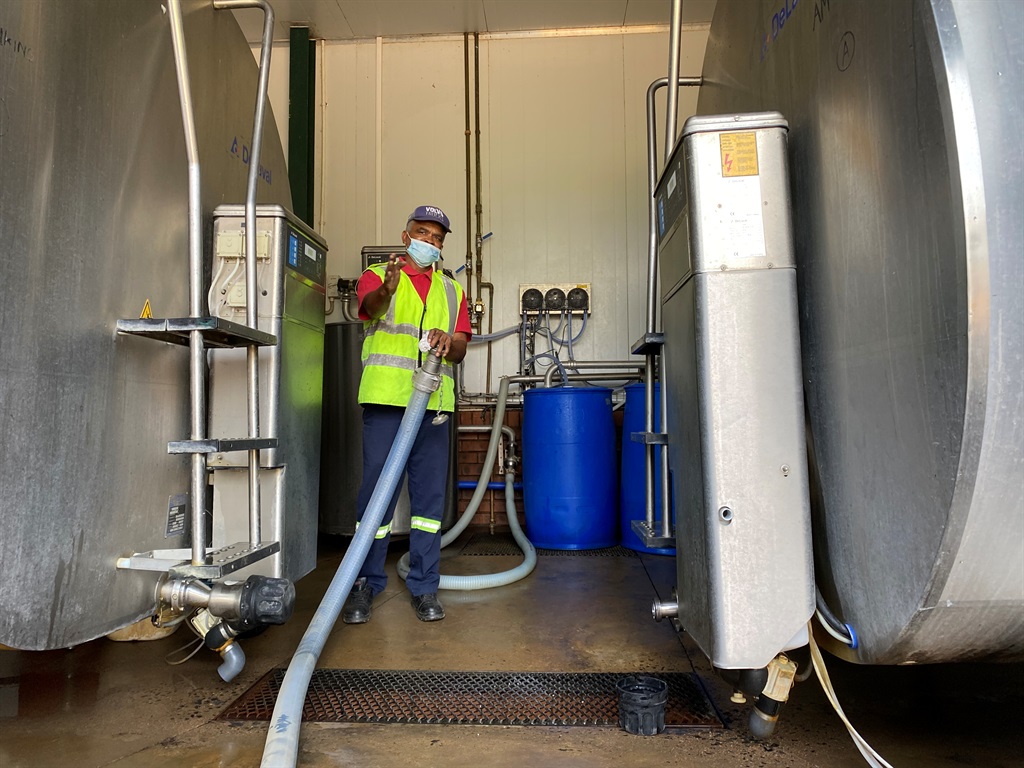 The suction pipe from the truck's tank is attached to the farm's chilling tank. (Image: Business Insider SA/Ntando Thukwana)

Before the collection begins, the milk is first sampled and tested for compliance, temperature, and a dipstick reading of how much milk is in the tank will be recorded. The following process is the tank agitation step, where samples determine how much fat, protein, and fat solids are in the milk.

"There's no pick-up in temperature in the tanker itself. We've [driven] those tankers for thousands of kilometers without 1°C pick-up."

Related Links
TAKE A LOOK | Inside Cilo Cybin, SA’s first cannabis company to list on the JSE
TAKE A LOOK | How Nestlé captured tons of CO2 to make baking soda at its Pretoria plant
Next on Business Insider
Fake meat gets a reprieve, after govt threat to remove it from shelves on Monday