An elevation of a solid-propellant intercontinental ballistic missile RS-22B (SS-24) installed on a combat railway missile complex in Russia, in December 2002. (Photo by: Sovfoto/UIG via Getty Images)

The US just announced it's backing out of a Cold War deal that was meant to last forever, and now Russia is too.

On Friday, US Secretary of State Mike Pompeo made official what the Trump Administration has been hinting at for months: the US is done with the Intermediate Range Nuclear Forces Treaty (INF). The treaty was signed at the end of the Cold War, and has pushed both countries to destroy thousands of nukes over the years, as they came into compliance with its ban on land-based short- and medium- range ballistic and cruise missiles.

Last December, Pompeo gave Russia a 60-day ultimatum to start complying with the treaty, and now that time is up.

"Russia has refused to take any steps to return real and verifiable compliance over these 60 days," Pompeo said Friday. "When an agreement is so brazenly disregarded and our security is so openly threatened, we must respond."

See also: US intelligence agents were reportedly warned not to tell Trump things that contradict his public comments

The announcement means that in six months, the US will no longer be bound by any of the treaty's rules.

After the US announced the back-out on Friday, Russian President Vladimir Putin took to Russian TV on Saturday and said since the US is backing out, Russia will do so too.

"The American partners have declared that they suspend their participation in the deal, we suspend it as well," he said.

The Intermediate-Range Nuclear Forces Treaty was the result of years of negotiation between the US and Russia during the Cold War. US President Richard Nixon and Soviet Union General Secretary Mikhail Gorbachev spent years drafting the plan, which aimed to eliminate all land-based missiles that travel anywhere from 500 kilometres to over 5,000 kilometres.

The two leaders finally put pen to paper on December 8, 1987 in the White House. By summer 1991, just two and a half years later, the two sides had destroyed some 2,700 missiles. When the treaty was signed, it was designed to stand forever, in an “unlimited duration.” 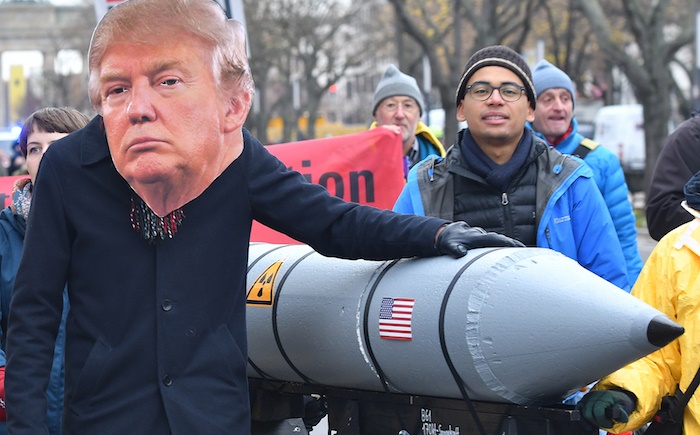 A protestor wearing a mask of US President Donald Trump puts his hands on a mock missile during a demonstration against nuclear weapons politics under the slogan "Stop the escalation - prohibit nuclear weapons!", in Berlin, Germany, 18 November 2017. (Photo by Paul Zinken/picture alliance via Getty Images)

But as far back as 2014, the US questioned whether Russia was really keeping up its end of the deal. Russia's President Vladimir Putin and US President Barack Obama shake hands at a meeting after the 70th session of the United Nations General Assembly in New York on September 28, 2015. (Photo by Russian Presidential Press and Information Office/Anadolu Agency/Getty Images)

In particular, the US has been worried about Russia's Novator 9M729 (SSC-8) missile with a nuclear warhead, “which US intelligence believes has been deployed to hold most of Europe at risk,” Business Insider’s Ryan Pickrell recently reported. A Soviet AN-602 hydrogen bomb during the exhibition titled "70 Years of the Atomic Industry: A Chain Reaction of Success" organised by Rosatom agency at Manege Central Exhibition Centre in Moscow, Russia, on 2 September,2015. (Photo by Sefa Karacan/Anadolu Agency/Getty Images)

Russia is also not convinced the US is holding up its end of the bargain. On Saturday, Putin gave the go-ahead for Russia to start developing new missiles, but added that he’ll only actually use them if the US does too. Deputy Foreign Minister Sergey Ryabkov has said before that the US is violating the pact with missiles in Poland and Romania.

"We are assuming the worst case scenario in our military planning." Ryabkov said last year. "We can't ignore the potential deployment of new American missiles on territory from where they will be a threat to Russia and its allies."

Russia is not the only growing nuclear concern for the US, though. China is "on the verge of fielding some of the most modern weapon systems in the world," a US defense intelligence assessment read in January. Chinese media has also been showing off a lot of weapons recently.

China isn't bound by the INF land-based missile ban at all.

"[China] has been able to make significant progress in the area of land-based offensive missile capabilities while simultaneously building up the air and sea components," Collin Koh, a maritime security specialist at Nanyang Technological University in Singapore recently told the South China Morning Post.

Other nuclear experts have also suggested that getting rid of the agreement might give the US a needed edge in any future conflict with China. "The US currently has the ability to strike targets in China through air strikes and sea-based missile systems," Adam Ni, a researcher on Chinese foreign and security policy at the Australian National University also told the South China Morning Post.

"The deployment of short or intermediate ground-based missiles to, say, Japan would add to US capabilities in the region and erode the Chinese advantage, which has been built over decades."

Still, the crumbling of the deal is a major concern for Europeans. The US could theoretically set more nuclear weapons up there, now that the land-based ban doesn't apply. People take part in a protest with a model of a rocket to call for the end of nuclear armament and the withdrawal of an alleged last nuclear weapons form Germany, at the entrance of the German Armed Forces air base in Buechel, Germany, 26 March 2018. (Photo by Thomas Frey/picture alliance via Getty Images)

German Chancellor Angela Merkel has urged both sides to keep talking. "It is clear to us that Russia has violated this treaty," she told Reuters. "The important thing is to keep the window for dialogue open."

Likewise, Senator Edward Markey (D-Mass) who deals with nuclear issues on the US Senate Foreign Relations Committee told The New York Times that the Trump Administration’s decision was "a tragedy that makes the world less safe." "President Trump and his war cabinet have yet again decided that America should go it alone, this time, by paving the way for a dangerous arms race," hesaid.

Original INF deal-signer Mikhail Gorbachev said the idea to back the US out of the treaty was "not the work of a great mind," a clear dig at President Trump, who announced his intention to withdraw from the INF in October. 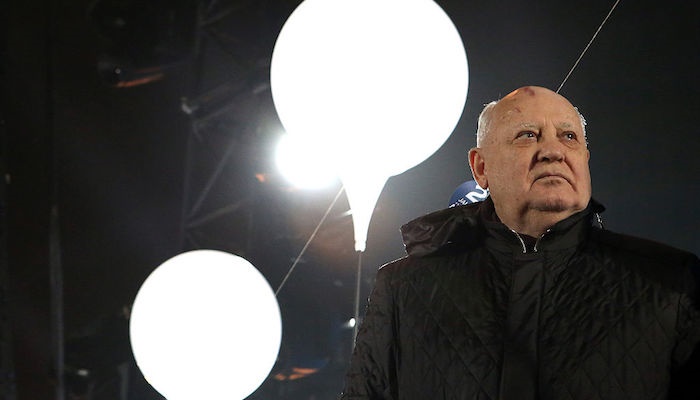 Former Soviet leader Mikhail Gorbachev attends celebrations for the 25th anniversary of the fall of the Berlin Wall at the Brandenburg Gate on November 9, 2014 in Berlin, Germany. (Photo by Adam Berry/Getty Images)

The Trump Administration has recently started work on its own next-generation nuclear weapon: the W76-2. It can be launched from a submarine.