16 photos that show the raw intensity of India's heaviest monsoon in 25 years that's killed over 1,600 people so far People watching the water levels of the Ganges and Yamuna rivers rise due to monsoon rains in Allahabad on September 13, 2019.
SANJAY KANOJIA/AFP/Getty Images
Monsoons in India are normal - typically beginning and June and beginning to retreat by early September. The summer and winter monsoons determine the climate across Southeast Asia and India and provide the water necessary for growing crops in the region.

This year, monsoon rains have surpassed average rainfall, making it the most torrential rainfall seen from a monsoon in around 25 years. It's causing whiplash for farmers, as monsoon season started during an unusually dry June, which led to water stress and drought in parts of central and south India.

While this heavy precipitation may have some benefits, like boosting winter crops or restoring water reservoirs, the rains have led to disastrous and even deadly flooding in parts of the country.

More than 1,600 people have been killed over this monsoon season, according to Reuters, many of which are due to collapsing buildings and walls. In the four days leading up to October 1, Al Jazeera reported over 100 deaths due to intense flooding in Uttar Pradesh and Bihar in northern India.

The monsoon should be receding sometime in early October, but some communities are still feeling the weight of heavy rainfall and flooding creeping into their homes, farmland, and even hospitals.

Here are some photos of the monsoon's devastating impact on different parts of India.

This year's monsoon has been the heaviest India has seen in a quarter of a decade — killing over 1,600 people since the beginning of the storms in June. Large-scale flooding this week has killed 111 people Uttar Pradesh and 28 in Bihar in the four days leading up to October 1. The rains have lasted longer than the traditional monsoon season, which normally subsides around early September. Patna, the capital of Bihar, is home to around 2 million people. Residents say they waded through water to get essentials and have been stuck stranded inside their homes. Flooding in Bihar has reached homes, shops, and even hospitals. In the eastern Ballia district, 900 inmates had to be evacuated from a prison due to rising water levels. 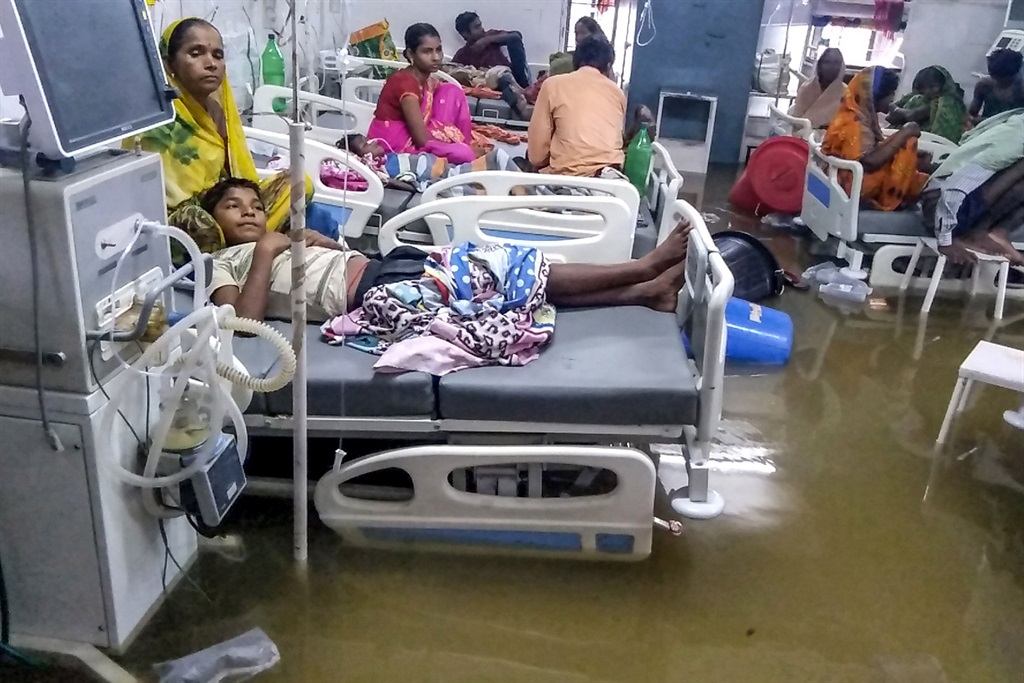 The extended monsoon is causing problems for farmers, as too much rain causes produce to rot. Onions are selling for around 80 rupees per kilogram in Delhi and Mumbai, compared to the usual 20 rupees. Due to both drought and then intense monsoon rains, India's onion crops suffered a blow. Prime Minister Narendra Modi has banned the export of onions to neighbouring countries and imposed limits on what retailers can keep on hand. While summer crops struggle, the monsoon can help winter crops like wheat, rice, rapeseed, and chickpeas, reviving the rural parts of the country. Heavy rains can also restock reservoirs and replenish groundwater. A combination of global warming and urban growth makes these monsoons, which have always been variable, especially difficult to predict. Rising temperatures, for example, causes massive amounts of ice to melt in the Himalayas — possibly leading to higher flow rates in the Ganges and Brahmaputra rivers. A World Resources Institute report predicts that India has the most GDP at risk due to river flooding across the globe. That risk could increase exponentially as the economy grows. Not every district in India has seen the intensity of the rain. Over one in five districts in the country received deficient rainfall this season, and places like Uttar Pradesh and Bihar received insufficient rain for the large part of monsoon season and then were bombarded in the second half of September. As of September 30, the country saw an average rainfall of 968cm, compared to the average monsoon amount of 88cm. Source: The Times of India

This September may have been the wettest the country had seen since 1917, and the second wettest in the India Meteorological Department's records dating back to 1901. The monsoon is not expected to retreat until October 10 — a record for the latest retreat of the yearly storms. The last time a monsoon was delayed this long was in 1961 when the retreat began on October 1. Related Links
Hurricane Dorian left at least 40 dead and 70,000 homeless in the Bahamas, and recovery efforts...
6 people were killed after a flash flood engulfed a narrow gorge in the Kenyan national park that...
Watch: Residents celebrate as Western Cape municipal dam overflows
Next on Business Insider
China will stick to its 'zero Covid' strategy even if it hurts the country's economy, Xi Jinping says