Four factors have fuelled India's harrowing coronavirus surge. Other countries could be next. 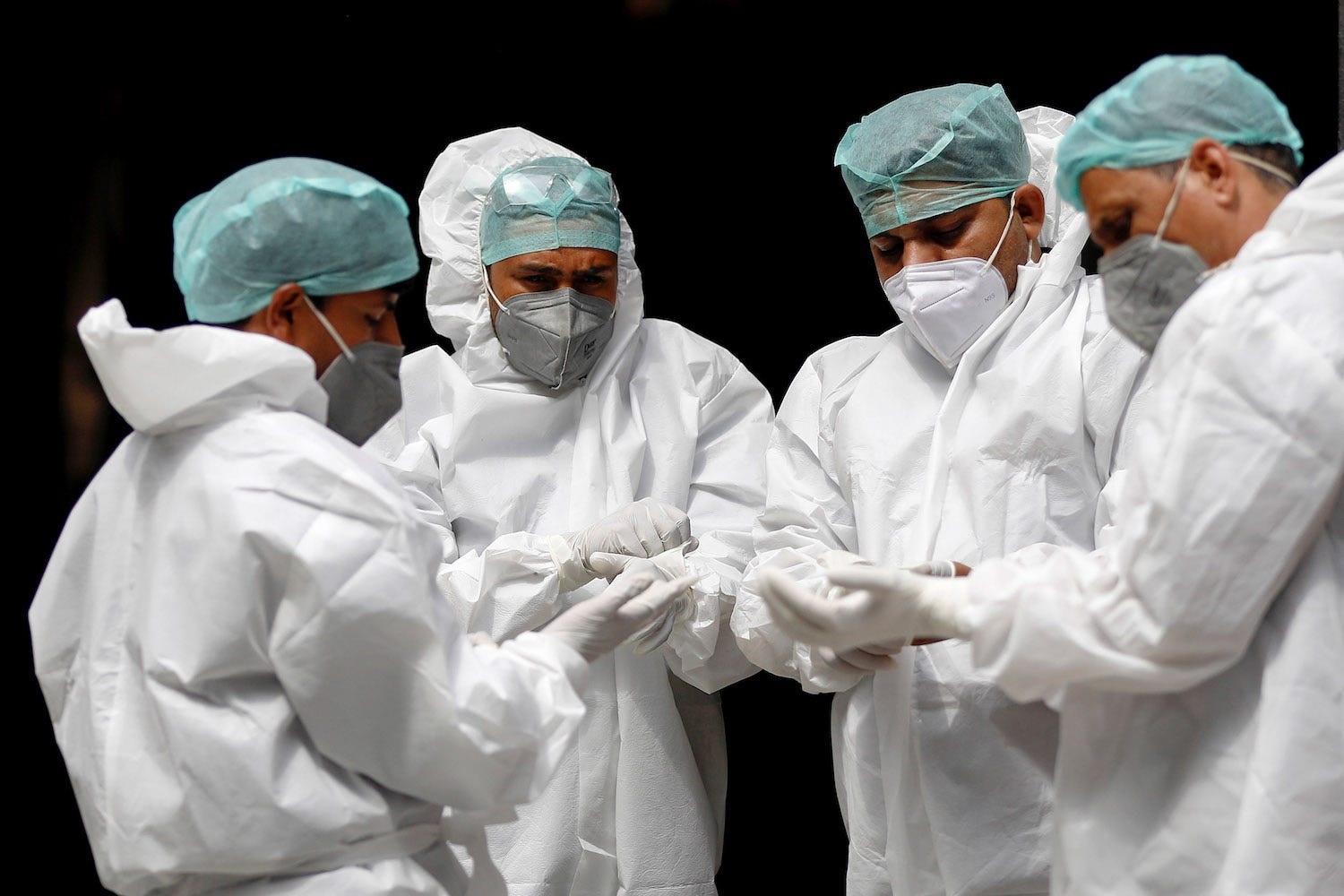 Just two months ago, India's coronavirus outbreak seemed to have turned a corner. Cases had plummeted to their lowest point since the beginning of the pandemic and vaccines were starting to be rolled out.

But Bramer Mukherjee, an epidemiology professor at the University of Michigan, wasn't convinced the progress would last. By mid-February, she spotted an uptick in cases amid an increase in weddings, family gatherings, festivals, and sporting events.

She called up her 81-year-old father and 79-year-other mother, who live in Calcutta, to see if they'd be getting vaccinated soon.

"They said, 'There's no virus right now. There is no rush,'" Mukherjee told Insider. "I think this actually tells you what happened: that in the valley of the virus, that was the right time for India to accelerate vaccination, but that did not happen."

Public-health experts point to four factors that have caused the outbreak to spiral out of control: rapidly spreading variants, an increase in social gatherings, a slow vaccine rollout, and an ill-prepared healthcare system. Had India used its respite over the winter to ramp up testing, genomic surveillance, and the supply of critical medications, they said, the nation would have been better prepared to handle a new surge.

"Unfortunately, the narrative that played out about how well India did caused a false sense of security," Krutika Kuppalli, an assistant professor at the Medical University of South Carolina, told Insider. "I always felt and believed that India would become the epicenter of this pandemic."

Mukherjee said India's "premature celebration of victory" could serve as a warning to other countries.

"The treacherous thing about this virus is that you cannot wait to see its action," she said. "You have to really track its silent footsteps."

Variants are likely the main culprit behind the surge

Rapidly spreading coronavirus variants are perhaps the biggest culprit behind India's harrowing outbreak. One in particular, B.1.617, has a "double mutation" that may help it evade antibodies generated in response to vaccines or previous infections. Scientists say the variant shows early hallmarks of being more transmissible than the original strain.

"This new variant seems more infectious, seems to grab younger people, and seems to have really driven the numbers up," Prabhat Jha, an epidemiologist at the University of Toronto, told Insider.

Scientists in the state of Maharashtra first identified the B.1.617 strain in March. At the time, they said the variant was linked to between 15% and 20% of cases there. By April, the variant had come to represent more than half of India's new coronavirus cases, according to GISAID, a global database that collects coronavirus genomes.

"The double mutant is now in California, it is in the UK, and similar variants are going to circulate all over the world," Mukherjee said. "It's really a global problem."

Other coronavirus strains could be fuelling the virus' spread as well. Scientists recently identified a variant with three key mutations, B.1.618, in West Bengal. And a variant in Bangalore, B.1.36, carries a mutation that has been associated with coronavirus reinfections.

Experts said India would benefit from regional lockdowns in areas where variants are spreading widely.

"If India doesn't get their pandemic under control, it affects the entire world," Kuppalli said. "We can put all the travel restrictions we want, but that's not going to prevent these mutations from getting to other places." Holi, a popular Hindu spring festival of colors, at a temple in Amritsar, India.
NARINDER NANU/AFP via Getty Images

Variants had plenty of opportunities to spread in India this spring.

Earlier this month, at least 50 million people crowded along the Ganga river for a Hindu religious festival that has since been linked to at least 2,000 coronavirus cases. Indian Prime Minister Narendra Modi has also held large election rallies, including one in March that attracted 800,000 people.

On top of that, experts said, many Indians felt it was no longer vital to continue social distancing or wearing masks. A January survey found that 56% out 28,000 people sampled in Delhi tested positive for coronavirus antibodies - leading many locals to believe that large cities had already reached herd immunity, according to Mukherjee.

"Many people were thinking by December, January, 'Oh, we've got this under control,'" Jha said. "That turned out to be just hubris and I, among others, had warned that it could really bite back."

Even countries like the US, UK, and Israel - which have vaccinated between 40% and 65% of their populations - need to be mindful that the virus hasn't disappeared, experts said.

"The real lesson here is: respect the virus, respect science," Jha said. "There's no other way out."

India has immunised less than 9% of its population since its national vaccine program started three months ago. That isn't particularly surprising, given the country's size.

"The challenges there of vaccinating a billion people are just extraordinary," Jha said.

But India's vaccine rollout also suffered from a lack of urgency, experts said: Some residents didn't feel the need to get vaccinated right away. Others were skeptical of the shots.

India approved its own vaccine, Covaxin, before human trials were finished. It's similar to China's Sinovac vaccine. The shot's makers, Bharat Biotech and the Indian Council of Medical Research, have said it is at least 78% effective. But Jha there's still uncertainty about how well the vaccine is working.

"We know that a similarly designed Chinese vaccine is underperforming in Latin America, and there might well be the same phenomenon occurring in India," he said.

The vaccination effort also took a hit when cases began to rise, according to Kuppalli, because that forced healthcare workers to shift their focus away from administering shots.

"Vaccines are great, and we need to be rolling them out and ramping them up, but you can't vaccinate your way out of a surge," Kuppalli said. 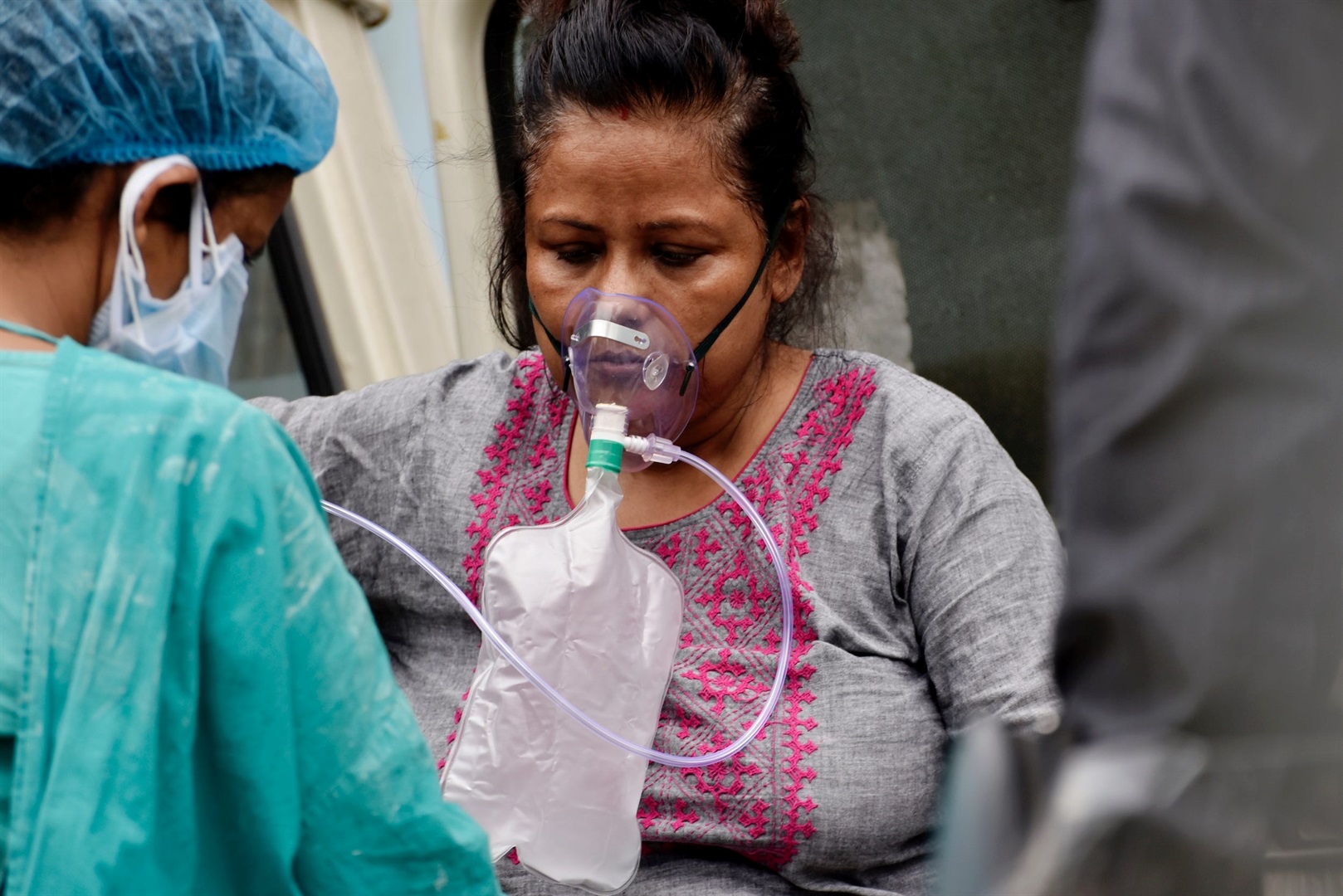 A Covid-19 patient gets admitted to a government hospital in Kolkata, India on 22 April, 2021.
Indranil Aditya/NurPhoto via Getty Images

Jha said the Indian healthcare system wasn't equipped to handle another outbreak on top of its vaccine rollout.

"You have to remember the background here is there's been chronic underinvestment in Indian health for quite some time," he said. "India, like many countries, sadly does not have an adult immunization program."

The country had a brief window when cases were low in which it would have been easier to scale up testing and the supply of critical medications, Jha added, but many government officials falsely assumed that the threat was over.

Now, the situation on the ground in India is likely even more harrowing than the official numbers indicate. Testing shortages prevent the nation from quantifying the scale of its outbreak, and a handful of doctors, local journalists, and relatives of the deceased have reported that official tallies don't reflect the number of bodies arriving at crematoriums. India's healthcare providers also lack the resources, including beds and medications, to treat patients.

"If you under-report and suppress data and number of deaths, then you cannot really estimate how many people are going to show up at the hospital the next day," Mukherjee said. "And that really harms your ability to provide oxygen and to provide healthcare resources to people."

Experts said some doctors in India have - whether due to a lack of training or sheer desperation - tried administering medications that don't work against the virus, like ivermectin, a prescription used to treat parasitic infections.

"I've heard stories of people getting three, four, five, six meds prescribed to them, medications that have not been shown to be effective at all," Kuppalli said. "I think people are just grasping for straws and that just adds to the chaos and the anxiety."

There can also be a financial incentive to offer drugs to patients in critical condition, Jha said.

"When you have a scenario like this, you'll get really desperate people," he said. "And then you also have very unsavory private providers that'll take advantage of that and offer all sorts of treatment, whether they work or not."

Drugs that can work, meanwhile, like the antiviral drug remdesivir, are now in high demand, Kuppalli said.

"There's a huge black market for remdesivir," she said, "and I'm worried that might happen for vaccines now as well."