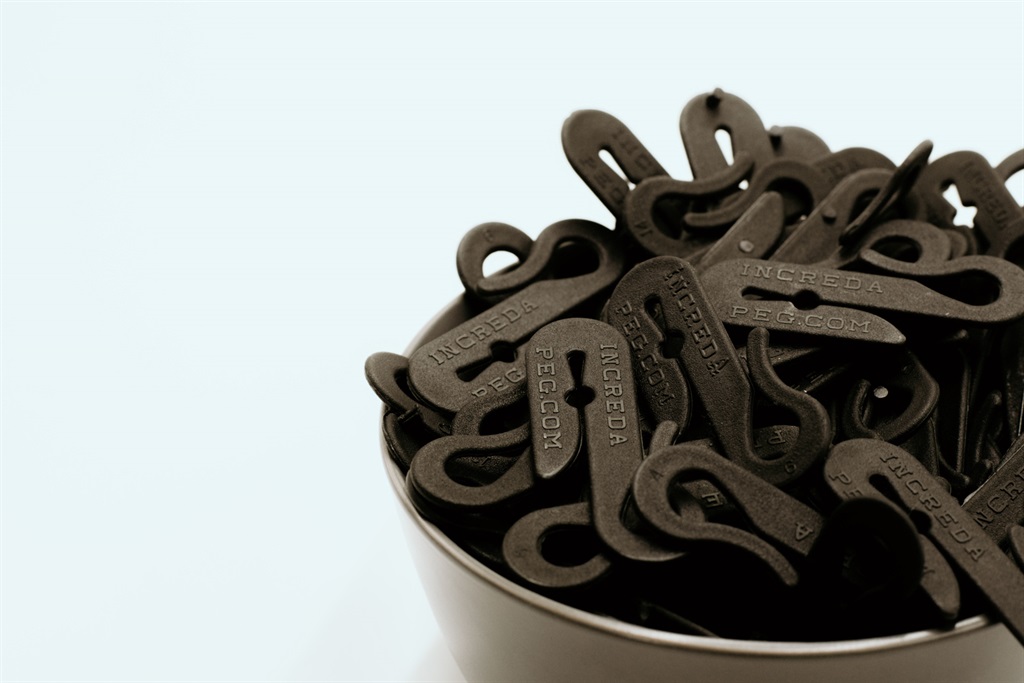 A local South African company is taking on clothing peg industry on one washing line at a time by transforming useless plastic trash into a multifunction clothes peg.

They call it the Increda-peg and while it may not look anything like a normal clothes peg, it's inventor Brett Potgieter says it can handle the job better than them. They’re made from 100% locally sourced recycled plastic and more durable than normal pegs. What's more they can be used for more than just clothing, from camping to gardening and even to keep your pot from over boiling by hooking it the side. Key to its success is a design which does not need a metal spring, typically seen in most clothes pegs, and which makes manufacturing them locally uncompetitive against the likes of mass producers China.

This was the lightbulb moment Potgieter came up with on a Saturday afternoon when watching the rugby from his home in Pretoria.

“I couldn't believe that something like this wasn't around. I got up and said ‘I'm going to make one right now’. I started waltzing around the house looking to see what I could make it out of.”

Which was right about when he turned into the kitchen coming across his wife’s favourite Tupperware, the only plastic in the house which he could think would be able to handle the design.

“And I knew I was going to get into trouble, but I could see it was the only thing that could work, so I went for it. We're a family of five. I did a lot of washing and I always wondered why there was never a hook. Because you had to hook up your underwear afterwards. And I thought that could save a lot of time.” The Increda-peg can be used for a variety of things, including gardening. Image supplied.

With this humble beginning in their Pretoria home the Increda-peg was born. Months on and one sacrificed Tupperware later, the business is a far cry from the garage operation it was. Potgieter says they manufacture around 800,000 pegs a month.

“Luckily, [the peg] worked well with recycled plastic. A lot of other products must use virgin material to keep the properties of the plastic to be able to work. The black, the colour black is part of the design. It sucks up the energy of the sun, and it stays flexible. And we are guessing it could probably last 10 years,” he says.

The 57-year-old Potgieter, who started out as a dental technician, says he has always tinkered with inventions. One invention, a product designed for helping you hang picture frames taught him a valuable lesson about the business of patenting.

“The thing I learned is it didn't look like a picture hanging hook. Everyone walked past it in the hardware store, and no one knew what the heck it was. I realised how much money it costs to market something. Retail is very, very expensive when it comes to buying the space on a shelf. As soon as that product is not moving, you need to remove it.”

“People had no idea what they were looking at until they saw a demonstration.”

Instead of trying to sell the product in shops, Potgieter, along with his wife and son, started to promote the product in flea markets around Gauteng. But, just as the business was starting to gain momentum, the Covid-19 pandemic stuck.  As with most small business owners, the mass disruption brought their small little business to a grinding halt. The Increda-peg can be used for a variety of things, including holding your cables. Image supplied.

As they tried desperately to migrate their business online, it was the single action of a nurse which saved them.

“We had a bit of luck with lockdown. A nurse used an Increda-peg to hold her surgical mask behind her head rather than around her ears. With that we were able to get a license to be able to distribute as a medical supplier and we began to donate a lot of pegs to hospitals for the nurses that were working. It allowed us to continue to manufacture and distribute during lockdown.”

From their factory in Silvertondale in Pretoria the company now pumps out thousands of pegs a day. Their largest market is their online sales with most sales making their way to Cape Town. They say on average they are recycling 1 ton of plastic every month, with 20 tons already turned into pegs since the business started.

“My family say I invent these things because I am lazy…because lazy people become inventors, because they're always looking for the shortcut.”

Surely one business determine to hang its competition out to dry.