Ina Garten made a massive cosmopolitan at 09:00 because 'it's always cocktail hour in a crisis' Ina Garten made herself a big batch of cosmos while in quarantine at 9 a.m. on Wednesday.
Ina Garten/Instagram

Ina Garten has been keeping her 2.2 million followers entertained on Instagram while social distancing, and that includes cocktail lessons at 09:00.

The "Barefoot Contessa" star delighted fans on Wednesday morning as she mixed up a huge pitcher of cosmopolitans, even sipping her concoction from a giant martini glass.

"It's always cocktail hour in a crisis!" she wrote in the caption alongside her Instagram video.

Garten begins the lesson by telling her viewers that, during these trying times, it's "really important to keep traditions alive."

"My favourite tradition is cocktail hour," she says with a knowing smile. "So I'm going to make you my favourite cosmopolitan, and you probably have all the ingredients right in your house."

Garten recommends using a "big pitcher" for her recipe. Garten advises using a big pitcher for her recipe because she likes to "make a lot of cosmos."
Ina Garten/Instagram

"I like to make a lot of cosmos," she says. "You never know who's gonna stop by. Wait a minute, no one's stopping by!"

Garten first brings out a bottle of Grey Goose vodka, emptying a big portion of the bottle into her pitcher. Garten pours plenty of vodka into her mixture.
Ina Garten/Instagram

Then Garten pours in a cup of Cointreau - noting that Triple Sec or "any kind of orange liqueur" will work as well - before adding one cup of cranberry juice cocktail.

"I mean, how easy is this?" she asks the camera, topping off the mixture with half a cup of "freshly squeezed lime juice."

"It's gotta be freshly squeezed," she says. "Very important." 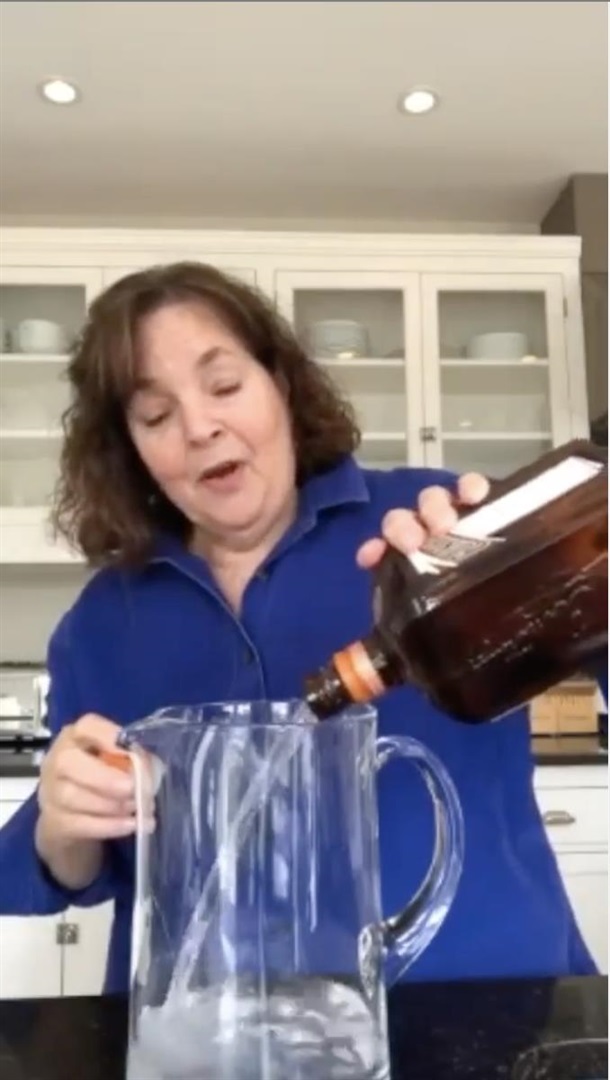 Garten then adds a cup of Cointreau to the pitcher.
Ina Garten/Instagram

Garten pours the mixture into a "very big" cocktail shaker, which is half-filled with ice.

"Oooh, this smells so good," she tells her fans. "Just what everybody needs, right? Put the lid on and just shake it up!"

"You have to shake it for 30 seconds," Garten adds. "You have lots of time, it's not a problem. During a crisis, cocktail hour can be almost any hour." Garten pours everything into a huge martini glass.
Ina Garten/Instagram

Garten then brings out a gigantic martini glass and pours herself a cocktail.

"I would say, in these times, this is really important," she says. "So just pour it right in. Oh, doesn't that look fabulous? Nice and cold. And lots of it!"

"Stay safe and have a very good time, and don't forget the cocktails," she adds before taking a big sip. "Mmm, delicious!" Garten then took a big sip from her cosmopolitan.
Ina Garten/Instagram

Garten has remained active on Instagram lately, posting daily dishes that her fans can easily make with ingredients that are already in their pantry

"Lots of people said they have ramen noodles in the pantry and so do I!" she wrote alongside a recipe for ramen chicken noodle soup.

Another post featured a potato bacon frittata, which the "Barefoot Contessa" star said was "a great way to clean out your fridge - deliciously!"

Garten told The Atlantic's Sophie Gilbert that she wants her Instagram posts to be helpful to her fans in this time of crisis, paying close attention to the questions they're asking about what she's cooking while in quarantine.

"The Instagram's really given me a point of reference," she said. "I started it thinking I just wanted people to feel like I was reaching out and supporting them, but they kept asking me questions. And I just thought, this is so great. It's like a town hall meeting for 'What can I do with what's in my fridge?'"

Garten said the posts have also given her some routine during an unprecedented time.

"It became a way to have purpose and order during the day," she told The Atlantic. "I cook in the morning and I post what I'm cooking, and then whatever it is becomes dinner."

But Garten said the best part is being able to connect with fans during a time when she - like all of us - is missing so many of the people she loves.

"I started this thinking it would be interesting to do," she said of her Instagram posts. "I had no idea the affection that would come back from it."

"It's really quite overwhelming, and that just encourages me to do it more."