If the Gaddafi-cash allegations are true, Zuma could face US sanctions – and much worse 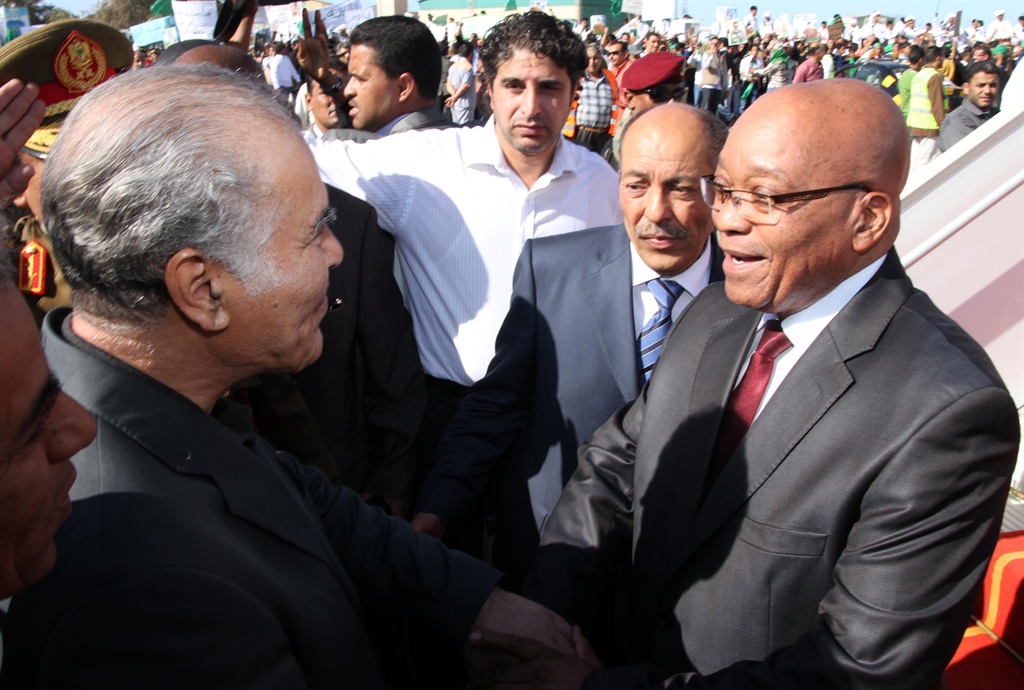 Then SA president Jacob Zuma arrives in Tripoli to negotiate with Muammar Gaddafi in 2011. According to a Sunday Times report, Zuma may have negotiated moving Libyan money to South Africa during this time. (Photo by XINHUA/Gamma-Rapho via Getty Images )

If allegations about his involvement in stolen Libyan assets are true, Jacob Zuma could be added to the US sanctions list – and potentially spend the rest of his life in a South African jail, according to a leading legal expert.

Zuma is reportedly considering legal action against the Sunday Times, which first alleged that he received $30 million from the deceased Libyan dictator Muammar Gaddafi, but it was not immediately clear if such legal action was really in the works.

Sigh! I owe millions in legal fees... I’ve asked you to assist with that one title deed in order for me to sell that house. I now hear that I have been keeping money belonging to my late brother Gaddafi. Where’s this money because His Majesty knows nothing about it? https://t.co/HputtXav1f

US authorities operate on the assumption that whenever a suspect transaction is denominated in US dollars, it falls under their jurisdiction. This has resulted in the aggressive pursuit of matters that, at face value, appear remote to the US.

Given the seriousness of the alleged transgressions – particularly because Gaddafi was on the US sanctions list, and the possible transfer of ill-gotten dollars across borders – the US authorities’ approach might well  be “very aggressive” in pursuing this case, says forensic investigator and legal expert David Loxton, CEO of investigations firm Africa Forensics and Cyber.

Loxton, who was previously a director at both ENSafrica and Denton, has assisted national and international law enforcement agencies in various investigations over the years.

“If the allegations are true, it means that a former President of our country helped a dictator, whose assets were frozen by global authorities, to steal money belonging to people from Libya,” he says.

At the very least, Zuma himself will be added to the US sanctions list, Loxton believes. This means Zuma won’t be able to travel to America or its close allies, and that any business associated with him will come under US scrutiny.

In South Africa, no financial institution may deal with you if you are on the UN sanctions list, says the head of investigation and enforcement at the Financial Sector Conduct Authority (FSCA), Brandon Topham.

“In addition due to reputation management I am sure that many financial institutions will use the US list unofficially when deciding whether to accept or continue doing business with a person or entity on the list,” Topham says.

There may be other service providers, including auditors and attorneys, who also may choose to not do business with someone on the US list, says Topham.

But landing on the US sanctions list may be the least of Zuma's concerns, if the allegations are proven true and prosecuted.

Zuma's problems would include that he helped move the money, and that the money was stolen in Libya, Loxton says.

Various media reports have alleged that Zuma, who was the last world leader to meet with Gaddafi before his death in 2011, conspired with the Libyan dictator to move some of his money out of that country.

Under South African law, if the allegations were proved, Zuma could land in jail for life.

According to the South African Prevention and Combating of Corrupt Activities Act, a life sentence could be meted out for serious violations. Bringing a large amount of foreign currency to South Africa, without declaring it, is also a serious transgression.

Topham says that to his knowledge, the FSCA is not investigating the allegations.

On Tuesday, Minister of International Relations and Cooperation Lindiwe Sisulu says her department will probe the allegations – if the Libyan government wants it to do so.

Libya is currently in the midst of a civil war, as a rebel group tries to seize control of Tripoli from Libya's UN-backed government last week.

Read: Gaddafi’s stolen loot may have been hidden in Nkandla - here's what you need to know about the origins of the money

Related Links
Bruce Whitfield: Running SA is harder than it looks – but just remember how bad things could have...
A TV drama about the Zuma years will cost a whopping R20 million an episode
We tested 11 SA accents on Google’s new app, and it perfectly understands Zuma – but not Malema
Next on Business Insider
Nestle is flying baby formula from Europe to the US to help tackle nationwide shortages