Imagine being able to turn the piles and piles of vegetable waste that you throw away every day into something good for the environment.  Thanks to the power of technology and an award-winning innovative business called the Compost Kitchen, South African consumers are just a button push away.

It's called the iCompost, and its purpose is to turn your kitchen scraps into compost, overnight. About the size of a microwave, this appliance can convert eggshells, small bones, naartjie peels and pretty much any piece of vegetable matter into food for your plants.

This is all part of Compost Kitchen founder Himkaar Singh’s dream to save the environment by making it easier for us to manage our waste from home rather than sending it off to the landfill.

"Imagine you throw away a rotten tomato...It's mainly made of water, so you're actually throwing away water. This means, in the conventional waste system, we're trucking around water, which makes little sense. The simplest way to compost food scraps at home is to have a compost heap in the garden, but most people are looking for a solution which has no odour, no flies, no vermin, and no mess," said Singh.

Singh is no stranger to revolutionising the way we throw our garbage away. In just a few years, Compost Kitchen has won numerous awards as well as diverted 30 tons of food waste from landfill and given back 2.2 tons of vermicompost to their customers, primarily done by carting waste around Fourways on the back of a bicycle and using an army of earthworms.

Singh thought there must be an easier way for South Africans to make their own compost without him doing the heavy lifting. This is where the inspiration to bring electronic composters into South Africa hit. During lockdown, he set up a pre-order cycle and was overwhelmed with interest.

Considering this, Singh sent Business Insider South Africa an iCompost and we put it through its paces to see if it lives up to the hype.

Here is how it works:

The device was larger than expected, measuring 35cm long x 19cm wide x 19cm high. Add to that when the lid is open reaching 50cm. 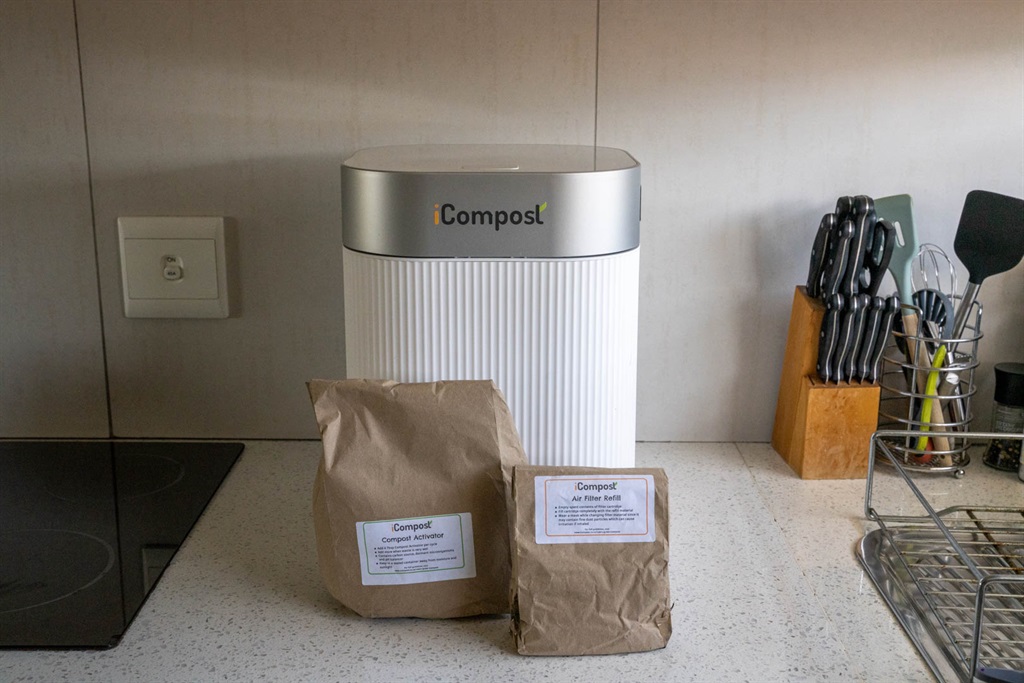 The idea of the device is ease of use, especially for homes that don’t have a lot of space. Normal composters, in general, are either too large or too smelly to be ideal for a kitchen.

The iCompost fitted comfortably in my kitchen. What you do need to consider is its height clearance because you need the lid to be fully open when throwing in your garbage.

It took a surprisingly long time to fill with waste.

Inside the composter is a 2-litre bucket. It took 3 days’ worth of garbage to fill it up to the recommended line. But obviously, on certain days you'll produce more waste than others. Once the waste was in the bin, it didn't smell.

The device came with this handy QR code which points you directly to a beginner’s guide. It’s got handy tips for first-time composters which makes using the machine a breeze.

Once full, you need to add 4 tablespoons (tbsp) of compost activator. Compost Activator is a 100% plant-based additive which enables the machine to produce compost, as well as to absorb odours - 4 tbsp are needed per cycle and a refill bag will last 35 uses. Depending how much you cook, a bag could last 1 -2 months. By adding Compost Activator to the cycle, the iCompost produces an early-stage compost. This can be mixed directly into the soil around plants or fed to an earthworm farm for further maturing.

After this, you are ready to start composting. Close the lid, press the ‘on button’ for a couple of seconds and it does the rest. 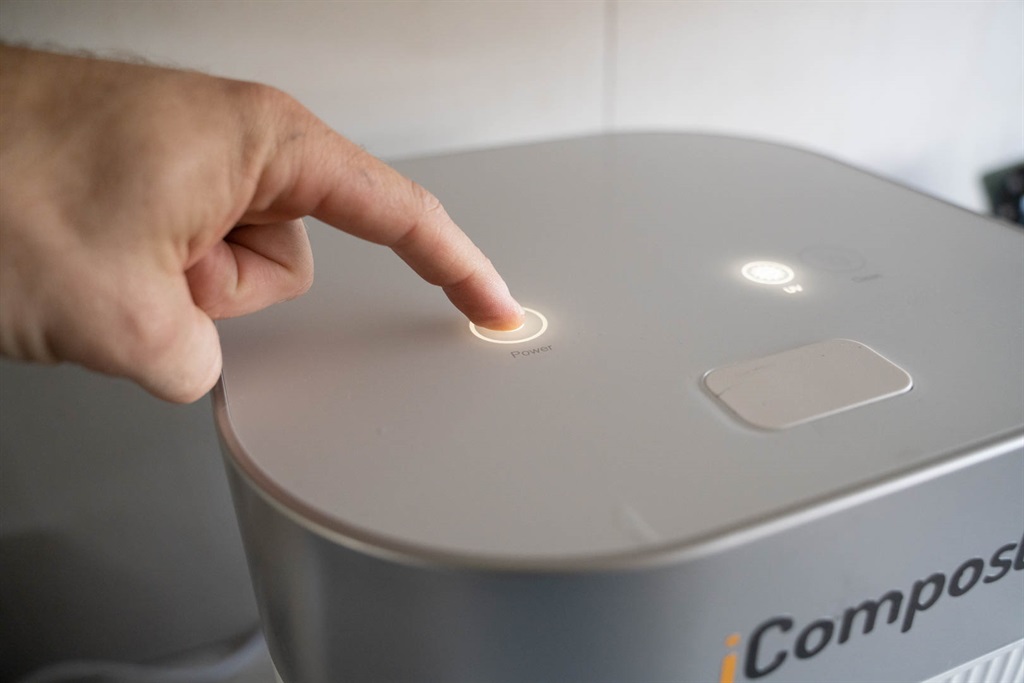 It has a touch panel to also allow you to switch on cleaning mode.

This sets the composting process in motion. It converts kitchen waste into compost in 4 steps: Drying, UV sterilising, grinding and cooling. Throughout the process you’ll hear the occasional click as the machine’s grinder breaks up your food waste into small pieces.

Make sure the composter is set up close to a well-ventilated window.

A big claim about the iCompost is that is has no odours associated with keeping food waste, as with some traditional composting bins.

Even with a carbon filter, which is meant to remove odours, we experienced some strange, unfamiliar smells during the drying phase of operation. What we found was the smell is related to what's inside. Pungent waste like citrus peels and onions can be quite strong. Once the drying phase of the process was complete, the smells dispersed.

Thus it is recommended you set up your composter near a window.

A typical cycle lasts about 5 hours. When the process is complete, the machine will beep repeatedly for about 30 seconds.

The 2L bucket can be easily removed from the machine so that you can pour the compost directly into your garden – it was super easy. The bucket is also dishwasher safe.

Make sure to run it between load shedding cycles.

The iCompost can take between 4-6 hours to run thought its cycle. Ours did in 5 hours. But, be warned, it needs to run for the full duration uninterrupted which during load shedding can be tricky to plan. 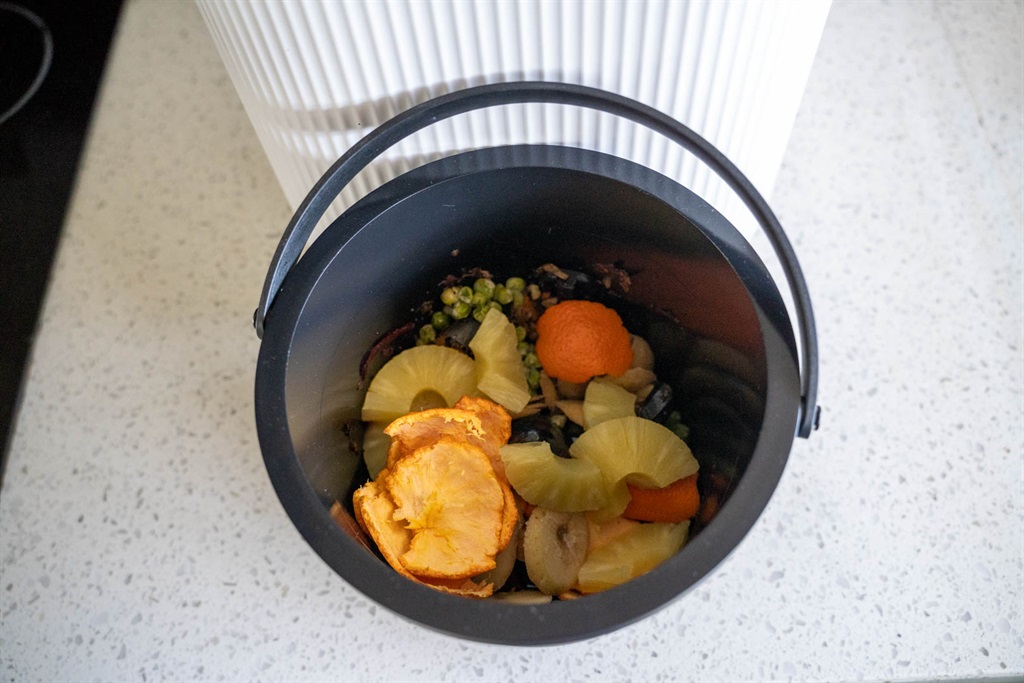 Among the foods that the iCompost can always process are: Fruit and vegetable trimmings (including peels); Cereals, grains, nuts (without shells) and legumes; Eggs and eggshells; Coffee grounds and tea bags; Solid dairy products, such as cheese.

These foods will be very beneficial to your soil and plants, especially with all the nutrients they contain already.

But not all waste is equal. There are some things that should never go in.

It is important to note that some foods can never be processed by the iCompost because they can damage the device or get stuck between the blades and block the motor.

These include: Wallnut shells; Pistachio shells; Corn cobs; Oyster and coconut shells; Certain fruit pits, such as peaches, mangoes or nectarines, avocados; as well as large bones found in beef, pork or chicken.

A full list of items can be found here.

The cost to make compost is quite high for an appliance...

The iCompost is currently on a pre-order special at R4,500, usually selling for R6,500. But as a first-time purchaser it’s a better idea to purchase their pre-order special plus an extra filter and activator for R4650.

This runs on the costlier side in comparison to most outdoor composters which range between R395 and R1,500. But most of these products live outdoors and require time as well as mother nature to produce the compost.

To combat load shedding Compost Kitchen is considering selling a solar battery-powered iCompost for R14,734, but we think this is a tad overpriced.

…but is it worth the squeeze? Yes, if you want to reduce your carbon footprint.

Compost Kitchen ran a carbon footprint analysis and found on average a full processing cycle of 1kg of food waste in iCompost will consume 0.7 kWh – about the same amount of energy used to make toast.

Comparing this to the average of  0.879 kg CO2 emitted in South Africa, excluding emissions from maintaining the electricity grid, a typical cycle of iCompost results in 0.62 kg CO2 of emissions.

This means using electricity to compost 1kg of food waste in iCompost is 30% better in terms of greenhouse gas emissions than letting it go to landfill.

Conclusion – a surprising piece of tech that goes a long way to reducing our waste. 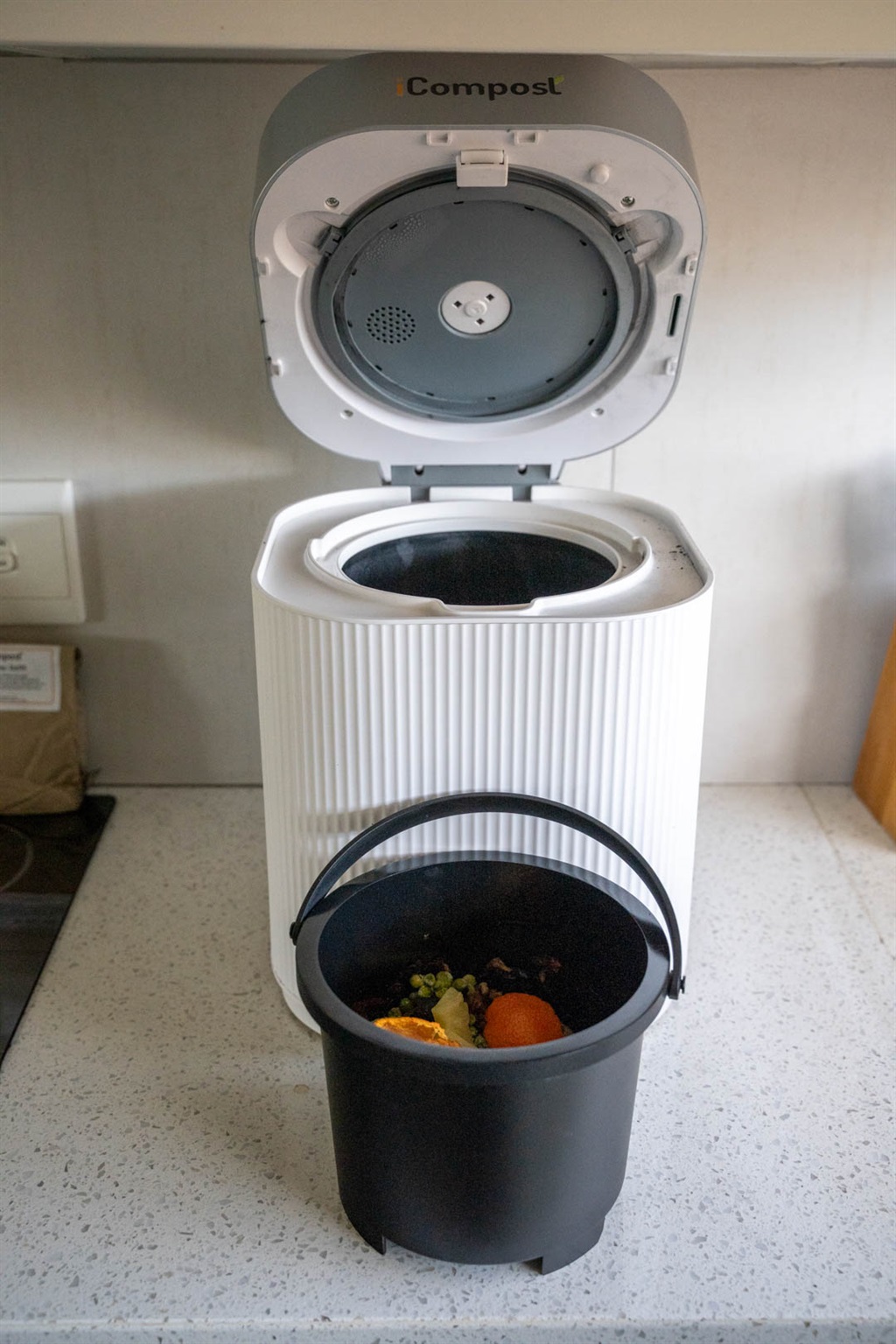 The iCompost is quite intuitive, especially if you have tried some form of composting before with earthworms. It errs on the costly side for an appliance.

It didn’t fully stand up to its claims of odour reduction, but once past the drying cycle the smells were far less invasive. Following the recommended advice and switching it on overnight is a good way of avoiding this.

Nevertheless, bearing a strange smell for a couple of hours is a worthy sacrifice to reduce one’s impact to landfill. And as a bonus your plants will truly appreciate the nutrient-rich top-ups every couple of days.

Overall, we think it’s a surprising piece of tech that goes a long way to reducing our waste and would love to see them in more homes across South Africa.