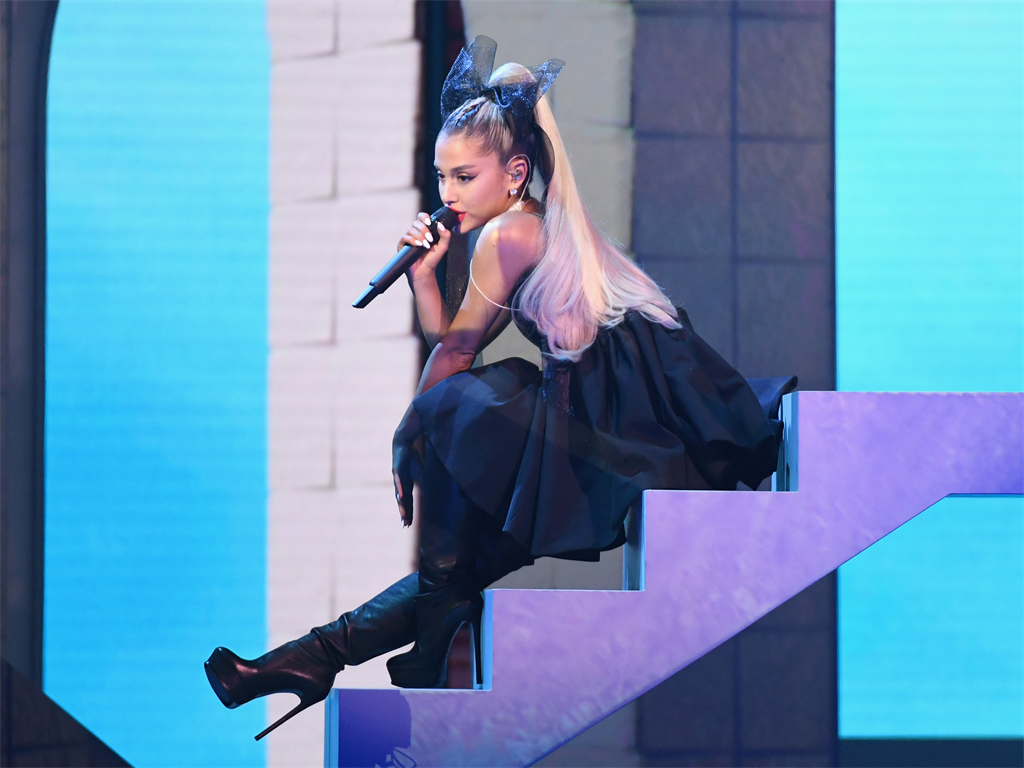 Ariana Grande does 150 reps and walks 12,000 steps a day.
Ethan Miller/Getty Images
It seems like there is nothing Ariana Grande can't do. In 2018 alone she's broken Spotify record after Spotify record, with her album "Sweetener" becoming the most streamed most-streamed album ever for a female artist in its opening week and Grande herself became the most streamed most-streamed artist on the site almost overnight. Let's not forget she also broke YouTube's record for the most views in 24 hours with her video "Thank U, Next" in late November and, to top it all off, she was named Billboard's Woman of the Year in December.

In between topping the charts and planning a world tour, the superstar manages to maintain a strict workout regimen - because she can truly do it all

According to the pop star's longtime trainer, Harley Pasternak, Grande has four go-to exercise moves that require no equipment at all and can be done absolutely anywhere, which is vital for a pop star who's always on the move. The singer's four standard moves are reverse lunges, pike planks, the Superman, and glute bridges. Pasternak recommends Grande do five sets of 30 reps each of one particular exercise every day. Sounds easy, right? That's what I thought before I spent a week of my life cursing Pasternak's belief that anyone could do 150 reps without wanting to die.

Before I set off on my week of Grande exercising, I spoke with Ashley Pascual, a certified instructor at Barre3, on how I should best approach the challenge considering my overall lack of fitness. Her advice was simple: Find a rep amount that works for you and don't push yourself too hard and risk burning out or injuring yourself.

"Consistency is key. If you don't feel like you can do 150 planks or 150 different things per day, find an amount that does fit into your schedule," Pascual told INSIDER. Of course, she notes that nutrition is just as important as exercising regularly. "If there's ever an option between white rice and brown rice, choose brown rice. You don't have to diet to eat every day, just make smart choices and if you want a chocolate bar then eat a chocolate bar."

With Pascual's advice in mind, I set out to complete one full week following Grande's workout routine. The goal is to complete the 150 reps each day, but listening to my body and making sure I'm not injuring myself or pushing my body to limits it's not used to. First things first, I'd like to admit I originally misunderstood Grande's workout plan, thinking she did 150 reps of each exercise every day - which I attempted and quickly abandoned. As someone who works out at least two times a week, I'm not a paragon of physical fitness. In fact, I spent a solid 30 minutes trying to figure out how to execute a reverse lunge without falling over or injuring my knee.

The first day of my Grande workout challenge I attempted to perform a total of 450 reps of reverse lunges, pike planks, and Supermen (?). I managed to successfully complete the 150 reverse lunges, but only managed to do 10 pike planks and 30 Supermen. It was at this point I realised I misunderstood Pasternak's workout regimen and decided to readjust the rest of the week. Although I completely failed day 1 of the workout regimen, I looked cute in my workout gear (from Outdoor Voices, for those who care) and that's all that really matters, right? Not to be dramatic, but I felt like I was slowly dying. It was only day two and my thighs were burning and sitting down felt like an unconquerable task. Nevertheless, I was determined to complete at least 100 reps of each exercise. After attempting to do 150 pike planks (I stopped at 15, sorry!), I switched tactics, attempting to complete 150 reverse lunges - which I'm quickly found to be the easiest exercise of the bunch to finish. Although I know Pasternak only requires Grande to do 150 of a particular exercise a day, I did 30 glute bridges in honour of Grande's new single "Imagine." I imagined I could do it and somehow I did. Day three was somehow even worse than day two, so I opt for a "rest" day. Grande fulfils a 12,000 step count every day so I decided to tackle a portion of these ambitious steps in the morning, walking in place as I binge-watched "Great British Baking Show." Don't judge me. It makes no sense, but walking in place was more fulfilling while watching amateur bakers attempt to make focaccia bread and ornate caramel lattices. I finished the day taking a post-dinner walk through my local mall, bringing my daily step total to just under 9,000 steps. I did a few Supermen exercises to close out the night, despite wanting to take a hot shower and fall into bed.

Day 4: I'm halfway there - and feeling the burn It's day four and I could feel my thighs wishing I'd done nothing but sit on the couch and recover. But, for the sake of journalism, I got off the couch and did 50 reps of reverse lunges, 35 pike planks, and 45 glute bridges over the span of 8 hours. I found doing a few reps of each exercise at a time helped me get closer to my 150-total rep count. The reverse lunges were the only exercise I could do within 15 minutes, taking zero breaks between sets. The next day was beautiful outside, so I took my exercises outdoors with a determination to complete a few sets of pike planks and superman exercises. The pike planks were difficult to complete, with 10 planks leaving my abs on fire that my body crumpled on the yoga mat below. Note to self, I could never be a pop star, the planks aren't worth it. On the bright side, as the week progresses, I'm found I was able to hold my plank steadier and pay more attention to the pattern of my breath.

A bad habit, I often find when I exercise is that I forget to breathe with intention. Thankfully, as I attempted to bring my tush in the air to complete yet another pike plank, I found that my inhales and exhales followed the movements of the rep. I didn't push myself as hard as I could and only did 25 of each exercise, for a total of 100 reps. Regardless, I was proud my body had made it this far. Two days to go.

I couldn't for the life of me imagine doing a pike plank, glute bridge or reverse lunge today, so I signed up for a local barre class instead. Sure, I could have booked a cycle class a la Grande's "Side to Side" music video, but seeing as I can barely sit down without whimpering, I opted for something a little less sitting focused. Barre class typically combines elements from ballet, yoga, and pilates into an intense hour-long routine that will leave you feeling the burn.

Oddly enough, the class I signed up for had us doing plenty of reverse lunges, planks, and glute bridges (AKA everything I was avoiding). The barre instructor made sure we worked our inner thighs and glutes until each body part felt it would simultaneously fall off and cramp up too, which left me thinking 150 reverse lunges at home would have been a bit easier.

Miraculously, I managed to survive a week performing Grande's rep-intensive resistance exercises. I have a newfound respect for our lampshading queen, who manages to walk 12,000 steps a day while exercising, making new music, and Instagramming her adorable pets. How she finds the time is a mystery, I can only assume it has a lot to do with her balanced nutrition and plenty of coffee for energy.

Adapting Grande's routine into your everyday routine is simple, but as Pascual warned, it's important to listen to your body and know your limits. If you're a novice exerciser like myself, consider building up your workout regimen from 10 to 20 and so forth. There's no need to risk injuring yourself or pushing your body to limits it's not quite ready for. Overall, Grande's routine is rep-intensive but gives you the freedom to exercise anywhere, anytime with no equipment. Read: You can fit in a few reverse lunges before you go to bed without even breaking a sweat.