Under the waves in the English Channel over the weekend, the biologist Lizzie Daly came face-to-face with an enormous underwater denizen: a 1.5-metre-long barrel jellyfish.

Daly was diving near Cornwall, off the coast of the UK, with her colleague Dan Abbott, an underwater photographer. Abbott snapped a remarkable shot of the cream-coloured, nearly translucent jelly; it was almost as big as Daly.

"It was breathtaking," Daly, an ambassador for the United Kingdom's Marine Conservation Society, told USA Today. "We had been diving for about half an hour, and out of the murky water was this single enormous jellyfish."

The jellyfish, whose scientific name is Rhizostoma pulmo, is generally harmless and commonly seen during the summer across waters in the UK, as well as in the Mediterranean, Adriatic, and Black seas.

It's the largest jellyfish species found in Britain, but this particular specimen was bigger than any Daly or Abbott had seen before.

"I've never seen a barrel fish or any jellyfish that big," Daly said in a video that she and Abbott produced about the encounter for Wild Ocean Week. "It was the size of my body."

Typically, barrel jellies' mushroom-shaped domed ends (called bells) can reach 1 metre in diameter. The animal can weigh up to 35 kilograms.

Daly told CBS News that she and Abbott followed the solitary jellyfish for about an hour.

"It was very humbling to be swimming alongside of it," she said. 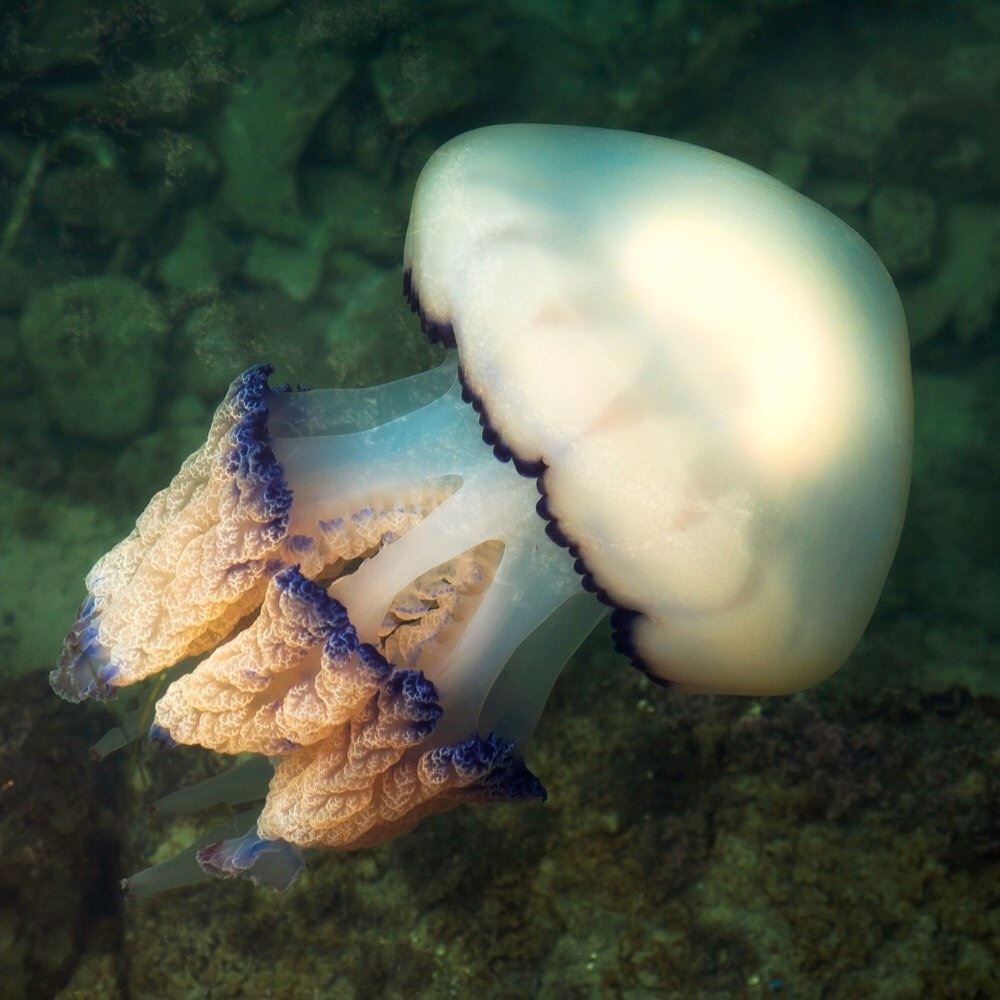 Despite its imposing appearance and frilly tentacles, the barrel jellyfish isn't dangerous to humans or other marine creatures; it feeds entirely on plankton.

"Barrel jellyfish are harmless to us in spite of their size," the marine biologist Cathy Lucas told The Guardian. "All jellyfish sting, but the barrel sting is weak."

The jellies' tentacles are covered in tiny stingers (which can even sting after the jelly has died), but they mostly serve to protect the animal from predators like the leatherback turtle.

"They're not a threat to humans," Daly told CBS.

Jellyfish have roamed the oceans for the past 500 million years. Composed of 95% water, the creatures don't have brains, stomachs, intestines, or lungs. Instead, nutrients and oxygen slip through their gelatinous layers of see-through skin.

Groups of jellies are called "blooms."

In the summers of 2014 and 2015, UK citizens discovered scores of barrel-jellyfish blooms near the same part of the Cornwall coast where Daly spotted her barrel jelly. The jellyfish had been drawn close to shore by plankton in warm summer water, but some washed up on the area's beaches. Of course, not all jellyfish are so benign. Some, like the box jellyfish pictured above, can kill a human in minutes. Their venom targets the heart and nervous system, and packs such a punch that swimmers can drown or die of heart failure before reaching shore.