A huge explosion sliced through our galaxy just 3.5 million years ago, as human ancestors walked the Earth. Scientists think it was nuclear activity in the black hole at the Milky Way's centre. An artist's impression of the massive bursts of radiation (purple) exploding from the center of the Milky Way and affecting the Magellanic Stream (the white cloud below the Milky Way spiral).
James Josephides/ASTRO 3D

The supermassive black hole at the center of our galaxy may not be as peaceful as scientists thought.

Just 3.5 million years ago, the Milky Way's black hole produced a massive explosion that sent cones of radiation shooting through the galaxy and beyond, according to new research. It was recent in galactic terms - ancient ancestors of modern humans walked the Earth at the time.

The explosion, likely caused by nuclear activity, was so powerful that it stretched to the Magellanic Stream, a cosmic river of gas clouds 200,000 light-years outside the Milky Way.

A study analysing the explosion's impacts on the Magellanic Stream was posted in the online repository arXiv, which publishes research that has not yet been peer-reviewed. The study is awaiting publication in The Astrophysical Journal.

"These results dramatically change our understanding of the Milky Way," the study co-author Magda Guglielmo said in a press release. "We always thought about our galaxy as an inactive galaxy, with a not so bright centre. These new results instead open the possibility of a complete reinterpretation of its evolution and nature." 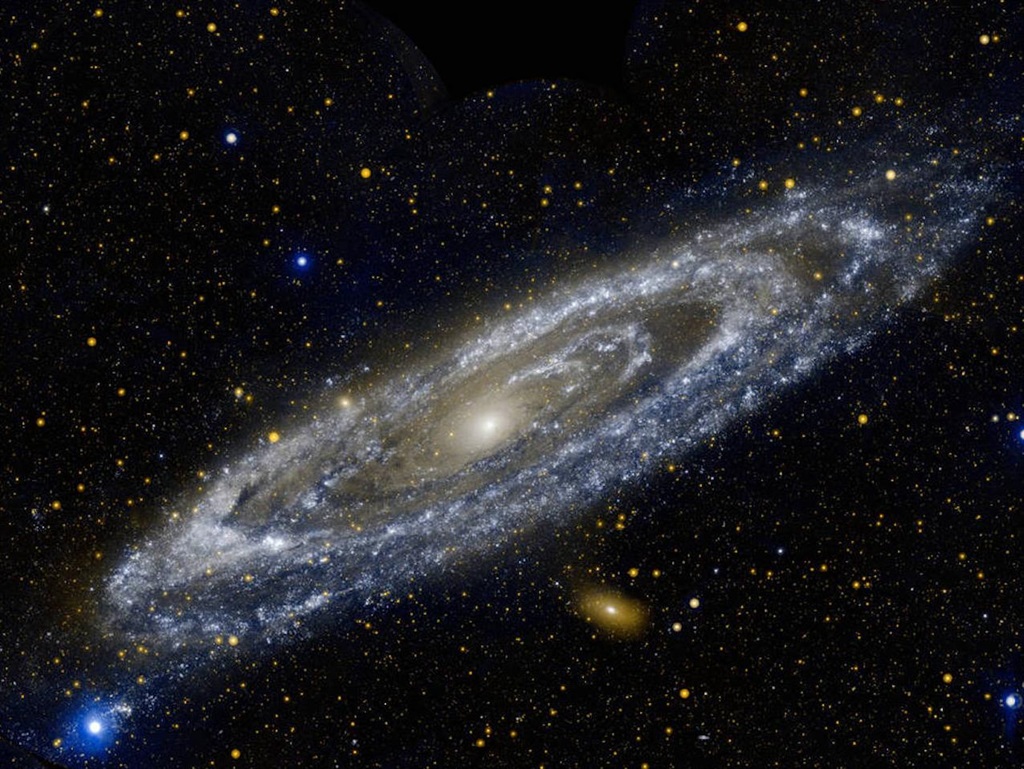 The team analysed observations from NASA's Hubble Space Telescope to reveal that some clouds in the Magellanic Stream are highly ionised - something removed or added electrons from their molecules to give them an electric charge.

Those ionised clouds are a pivotal piece of evidence for the nuclear explosion that previous findings had only hinted at.

Satellites have detected bubbles of gamma- and X-ray radiation extending up to 50,000 light-years above and below the plane of the galaxy. In 2013, scientists identified changes in the energy levels of hydrogen electrons along the part of the Magellanic Stream that's in-line with those radiation bubbles. They could tentatively attribute those changes to activity in the galaxy's black hole, but this new finding makes the picture much more clear.

The explosion created two cones of radiation that shot through the Milky Way, expanding from a tiny point near the central black hole to impact a vast portion of the Magellanic Stream.

The below video, created by James Josephides, shows the cones (purple) stretching beyond the Milky Way spiral to intersect the Magellanic Stream as it circles the galaxy.

"The flare must have been a bit like a lighthouse beam," Joss Bland-Hawthorn, an astronomer who led the research team, said in the release. "Imagine darkness, and then someone switches on a lighthouse beacon for a brief period of time."

The blast lasted about 300,000 years, the researchers estimated. On cosmic timescales, that's a short explosion. On a human timescale, it would have seemed like a permanent fixture in the sky.

Ancient human ancestors may have watched the explosion At the time of the explosion, one of humans' longest-lived ancestors was spreading across Africa. Australopithecus was a group of primate species that walked on two legs like us but still had the tiny brains characteristic of apes, and sported teeth somewhere in between.

The group encompassed Australopithecus afarensis, a species of early human that lived in East Africa and included the famously well-preserved fossil Lucy.

They might have noticed the galactic explosion looming overhead, but it likely had no effect on them.

"They may well have looked up towards Sagittarius and seen cones of light shooting sideways from the Milky Way, brighter than any star in the night sky," Bland-Hawthorn wrote in The Conversation on Monday. "The lightshow would have appeared as static beams on a human timescale, only flickering on timescales of thousands of years."

The explosion shows how much we don't know about black holes It's still unclear what exactly would have caused an explosion on such a huge scale. How black holes evolve and influence their galaxies remains "an outstanding problem in astrophysics," the researchers said in their paper.

"We don't understand why this activity is intermittent, but it has something to do with how material gets dumped onto the black hole," Bland-Hawthorn wrote in The Conversation. "It might be like water droplets on a hot plate that sputter and explode chaotically, depending on their size."

In an effort to better understand the nature of that activity, the international team of researchers that took the first photograph of a black hole is turning its telescopes to the center of our galaxy. The team plans to start releasing video footage of the Milky Way's black hole in the next five years.

In the meantime, Earth is safe from flares like this one because we're far from the galactic center, in a backwater of the galaxy.

"This is a dramatic event that happened a few million years ago," Lisa Kewley, director of the Arc Centre of Excellence for All Sky Astrophysics in 3D, said in the release. "This shows that the center of the Milky Way is a much more dynamic place than we had previously thought. It is lucky we're not residing there!"