10 ways to trick your brain into being more productive, according to a neuroscientist Ryan Muir for Adobe 99U

If you've ever complained about being too busy, it may not be your boss overworking you - your brain could be the problem.

Aside from actual work, employees waste more time with constant distractions, meetings, and emails than ever, according to software company Atlassian. Technology hasn't helped: on average, Vox found workers send Slack messages every 12 minutes in an eight-hour workday.

Read more: 15 top companies that let you have a life outside of work

In conjunction to the constant barrage of distractions, employees and executives around the world complain of burnout and stress, particularly at large tech companies.

The paradox between the decline in productive work during the day and the feeling of being constantly overworked could boil down to your biology, UC Berkeley cognitive neuroscientist Sahar Yousef told the audience at Adobe's 99U conference, which brought together creative experts in fields from virtual reality to interactive art.

Everything about the workday has changed, Yousef said: most communication no longer occurs in person; technology allows workers to constantly be plugged into work regardless of a 9-to-5 schedule; you have coworkers around the world; and open offices have replaced cubicles.

Our bodies are the only thing that haven't changed, Yousef added. Many of us have not adapted our biology or rewired our brains to the tech that transformed our workplaces.

"We've created amazing new tech and devices, but the crux of the problem is that we're not changing - we're still ancient, we still have this old biology," Yousef told the audience. "Until we actually stop fighting our biology and embrace it and leverage it, it's going to feel like an uphill battle."

Yousef explained ways to rewire your workday to get the most out of your body's optimal performance ability. Here are 10 ways to trick your brain into getting more done, according to Yousef.

Keep smartphones — whether yours or someone else's — out of sight. Distraction is the number one effectiveness killer, Yousef said. The main distraction culprit? Your smartphone.

In fact, a study out of the University of Texas-Austin found that if subjects were in the same room as any iPhone, even one that's not turned on and not theirs, basic intelligence, memory, and attention scores all dip. "By having your smartphone out, you are literally bringing the IQ of the entire room down," Yousef told the audience.

Smartphones distract humans because, psychologically, they are no longer just objects to place phone calls. People become emotionally attached to feelings of value or memories, whether through emotional phone calls you remember having or with pictures of relatives you store.

"These phones are emotional, we care about them, and this is why they are the most distracting thing in human history at this point," Yousef said.

Keeping iPhones away help you detach from the emotional connection you have with your phone. Open offices have caused a net decline in productivity: Harvard researchers found with open office plans, face-to-face interaction time got cut by a factor of four, and workers sent 56% more emails at double the length.

For this reason, doing work in a busy coffee shop can be more productive because you don't have any connection with those around you.

"The human brain isn't designed to be in a massive open space," Yousef said. "You're physiologically more stressed out. It's like trying to get work done at a daycare center."

Remember that it's physically impossible to multitask. 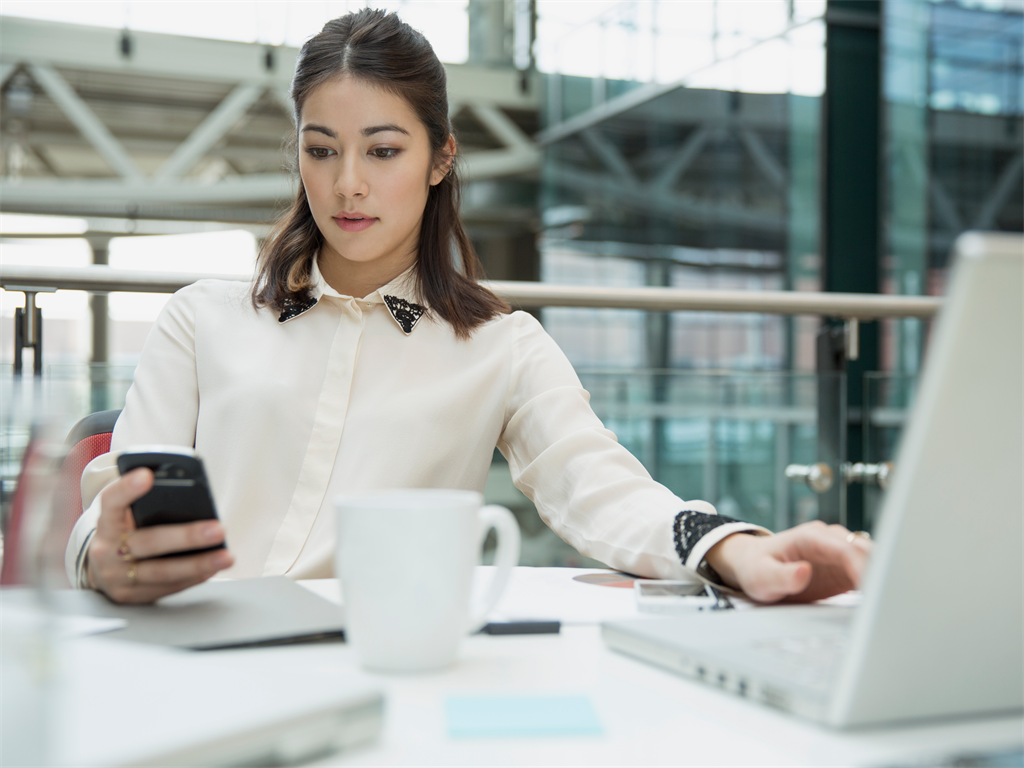 When humans switch from one task to another, our brains must take time and energy to focus on the next task. The time wasted in switching between tasks is called a "switch cost."

"Every single time we switch there is a cost," Yousef said. "It's draining. It's taking longer to do the same thing."

Yousef instead encourages people to mono-task, or even schedule intentional time to do one thing, called a "focus sprint." To do a focus sprint, you must set aside a block of time to intentionally get a single task done, set a timer, and turn off all other notifications.

Turn off your notifications. People have, on average, 90 seconds before getting interrupted as of 2013, according to the University of California-Irvine. In 2011, people had three minutes before getting distracted.

Notifying you and distracting you is all part of the design, Yousef said. Apps are designed to use psychological tricks to continuously grab your attention. App developers even looked at how casinos keep gamblers addicted to slots, and they created notifications to mirror their effects, Business Insider's Avery Hartmans reported.

To keep from getting distracted, Yousef said to take back control over notifications by turning them off and focusing your energy on productive tasks.

Anchor your attention by writing down your tasks. Before performing a "focus sprint," or whenever you want to set aside time to accomplish one task, writing it down on a sticky note and keeping it on your monitor will help anchor your attention. Every time you find yourself getting distracted, Yousef said, the sticky note will help bring you back to the task.

Setting a timer can also help "light a fire under your butt" to do the task in front of you and minimize distractions. The root cause of procrastination is fear, Yousef said. When you have a mountain of tasks in front of you, you think it's never going to get done anyway and start procrastinating. "It's when the task in front of us looks so big that we start to do silly things, saying I'm not enough for the task."

To trick your brain into doing more, break down your tasks and ask yourself what can get done in five minutes that will push you forward, Yousef said. The hours of the day are not equal, Yousef said. Some parts of the day lead to more creativity, while others keep you at a low energy level. Finding the hours of the day you reach your peak performance level and optimizing that time frame leads to more success, she argues.

Yousef suggests strategically designing your workday around your peak performance hours, which you can find through jotting down what parts of your day lead to the most productivity. Many successful people, from Barack Obama to Steve Jobs, wear the same outfit every day.

Psychologically, these successful people wear the same clothes to keep from having to decide what to wear. In doing so, they avoid decision fatigue, or the psychological idea that making decisions depletes your brain's energy, Yousef said.

The willpower humans have to make good decisions, what Yousef refers to as self-regulatory strength, is actually a finite, deplorable resource. Spending too much time in a day making meaningless decisions keeps you from using self-regulatory strength to make important ones. Instead, Yousef suggests automating certain decisions, like what to wear or eat for breakfast, so you can ultimately make better decisions related to work projects. While many college students or workaholics believe pulling all-nighters gets more done, a lack of sleep has effects similar to being drunk. In fact, Yousef said, going 22 hours without sleep has the same biological impacts as having a 0.08 blood alcohol concentration. Yousef also says to use caffeine effectively. Humans typically already have energy right when they wake up, and throwing more coffee on top of your energy won't help. Instead, for people who have average circadian rhythms (your body's internal clock), the best times to have caffeine are at 10 am and 1 pm, or after lunch.