How to talk politics with people you don't agree with, according to an FBI hostage negotiator and a therapist A President Donald Trump and a former Vice President Joe Biden supporter converse before the Joe Biden Campaign Rally at the National World War I Museum and Memorial on March 7, 2020 in Kansas City, Missouri.
(Photo by Kyle Rivas/Getty Images)

Even though President-elect Joe Biden won the 2020 election, the fact remains that nearly 73 million Americans voted for President Donald Trump to remain in the White House for the next four years.

The sharp divide in national sentiments has created many seemingly insurmountable rifts, both on social media, and in families, among co-workers, and friends.

In a recent interview with Insider, former M*A*S*H star Alan Alda said he's seen the divide play out personally among his friends, some of whom are no longer on speaking terms with their family members.

"We've divided so sharply on political opinions that there's not even talking going on," Alda, namesake for the Alan Alda Center for Communicating Science at Stony Brook University, told Insider. "We've even lost interest in arguing. Instead of that, we go straight to hate and contempt."

Beyond drawing on his own experience with improvisation as an actor and his work in science communication, Alda started a podcast called Clear and Vivid to speak with experts to learn new ways to better connect with other people.

Perhaps one of his most enlightening interviews, when it comes to managing contentious conversations, was with former FBI hostage negotiator Chris Voss.

As we come up to Thanksgiving, Insider heard from Voss, and spoke with Alda and social worker Elizabeth McCorvey, who each offered their best tips for how to begin difficult conversations with folks you disagree with — passionately.

One: Don't start the conversation with politics, start with care 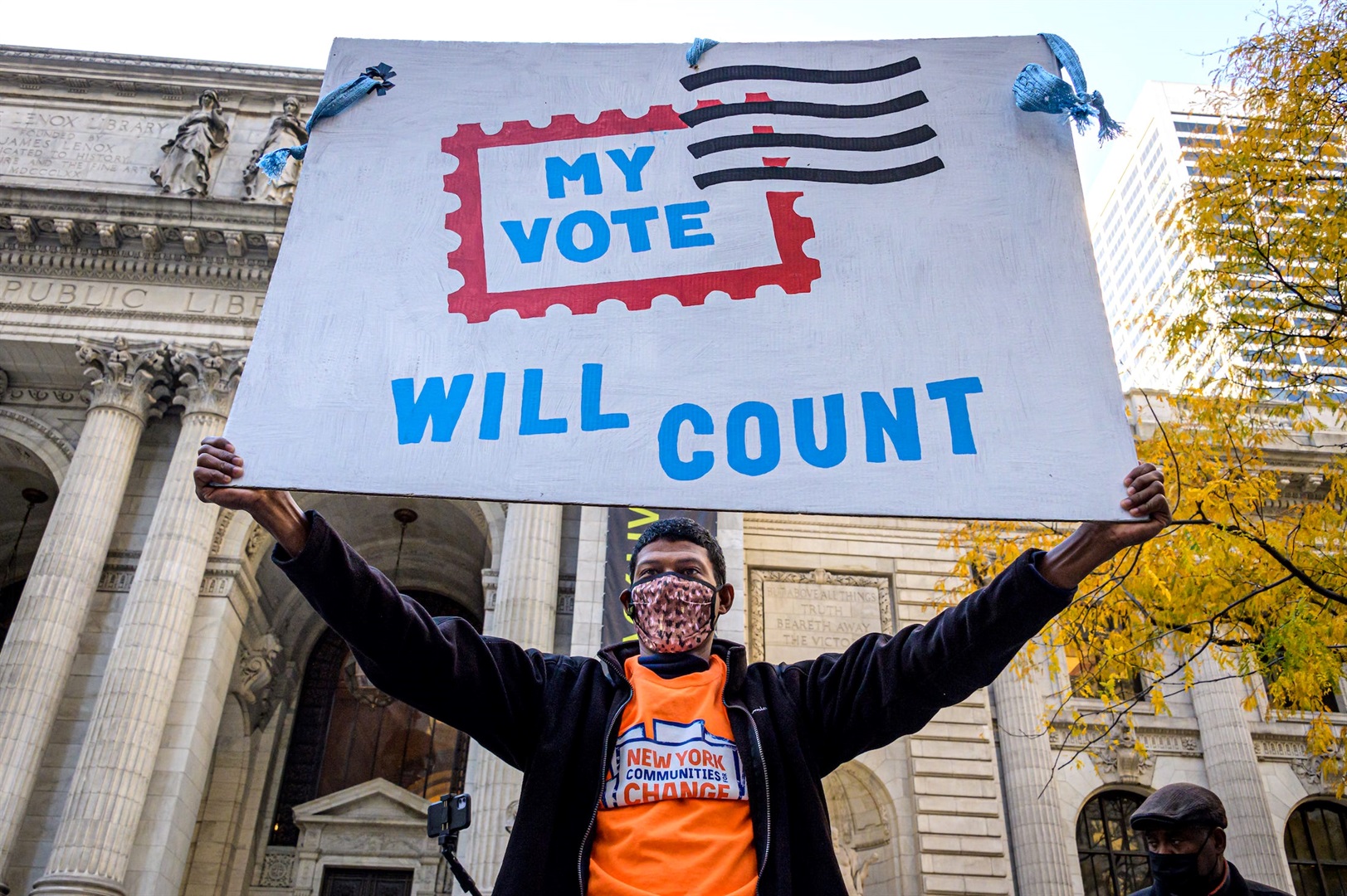 Concerned citizens and members of the NYC Protect the Results Coalition gathered at the steps of the New York Public Library in Midtown Manhattan on November 4, 2020 to demand that every vote has to be counted before a state can be "called" for a candidate.
Erik McGregor/LightRocket via Getty Images

In 2009, Alda devised the "Alda Method" which is used by thousands of scientists, doctors, and others to better communicate science with the general public.

Trust, Alda says, is the essential building block of any good conversation, especially with someone who may not be on the same page.

"You're not going to have trust if you assume, before you even start, that this person is beneath contempt," he said. Think about "what ways this person is not your enemy" and even "in what ways you're very much alike."

"Before you talk about politics, it might be a good idea to talk about how good the turkey is," Alda said. "That might be the first step to being willing to hearing what they have to say. We have to be careful not to go straight to contempt for what we assume is an untenable position."

McCorvey, the author of a new guide for therapists on how to talk about race with clients, recommends starting conversations by simply asking your adversary how they've been.

A good way to dig deeper with that question is to ;ean into the "I" statements that psychologists know work so well.

"You can say 'man, I really struggled with everything this November. How did that go for you all?'" she suggested.

Two: Listen and repeat what the person says to establish empathy

If you're going to debate someone, you have to understand where they're coming from. So listen up and be genuinely interested in their perspective.

Voss said this technique, called cognitive empathy, is one of the bedrocks of good negotiations.

"It's completely understanding, with no judgment, where the other side's coming from," Voss said on Alda's podcast. "Now that sounds really innocuous, it's actually a lot harder to implement."

In the psychotherapy world this is referred to as "motivational interviewing" — paraphrasing what a person says and repeating it back to them.

You're not endorsing what the person is saying. It just shows "that you have heard them," McCorvey said. "The intention at this point is not to change their mind, the intention is to just say back literally what they said to you."

World cup winning soccer star Megan Rapinoe demonstrated how she holds this kind of empathy for her dad, even though she can't get behind his support for Trump.

"I love my dad and admire so many wonderful things about him — his kindness, his decency, his generosity, his work ethic," Rapinoe wrote in her new memoir, "One Life." "He's from a conservative white town that's been hit hard not only by recession, but also by businesses taking their operations overseas, and his views were echoed by a lot of people he knew." Biden supporters at a watch party in Miami, Florida on November 3, 2020.
Chandan Khanna/AFP via Getty Images

It's well established that citing facts is not an effective strategy to change minds or establish a rapport.

But "you probably have some common ground" with the person you're arguing with, McCorvey said. "It may just be like a hundred levels lower than you thought."

That is where your conversation should be rooted, McCorvey said: "Where do you agree?"

Give some specific examples to illustrate your point, such as: "I'm feeling a little worried about a friend of mine not being able to have healthcare."

"You might not agree on how we can be kind to one another and have everybody covered by healthcare and what the best plan for that is, but you can agree — maybe — that people shouldn't die in the streets," she said. "Even if someone doesn't share your political views, they probably aren't saying 'I hate people and I want them to die.'" Stay curious about what you're hearing the whole time you're in debate.

Try to be "a detective, rather than trying to be the devil's advocate," McCorvey said.

By listening to the other person, and repeating what they've said (see step 2), you may even unearth a new layer of conversation that you weren't expecting, or surface a new point of clarity between you.

"The person might be like, 'well actually that's not what I meant,'" McCorvey said. "Then you're having a conversation with someone who doesn't share your same viewpoint, and that's kind of the goal sometimes, to just be in conversation."

It's much more effective to lead with genuine curiosity.

Five: Don't be in it to win it — leave your ego at the door Think about what you're aiming for. It should not be for everyone to say you know best.

Your ultimate goal is for the person on the other side of the table to say "that's right," not "you're right." That subtle difference signals that they agree on an established concept. If they say "you're right," there's a charged element of concession, or trying to shut you up.

"'[Y]ou're right' is designed to get you to shut up and preserve the relationship instead of just telling somebody to 'shut up,'" Voss said.

The truth is, you're probably not going to change someone's mind radically in one second. But that's going to be especially true if you go in to the conversation with an attitude that you are right and they are wrong.

If you have deep ideological divisions in your family that bother you, then these are conversations you should be having at regular intervals, well beyond your Thanksgiving Zoom call.

"Conflict doesn't have to be a bad thing," McCorvey said. "It's fundamental for building relationships."

It's important that you feel comfortable with having these conversations. So find ways to practice, "with friends, or in your book group, or in your social justice activism club," McCorvey said.

"Where can you plug in to continue to practice, so that you stay involved and develop the thick skin necessary to stay in the conflict?"