Every manager and every workplace is different, but speaking generally, the best way to get your boss to like you is to do great work.

That said, if you're looking to really bowl them over - and potentially even become their favourite team member - there are a few simple strategies you can use.

Business Insider looked into scientific research and expert opinion and came up with 11 tricks to help you wow the higher-ups.

Try to solve problems on your own In his 1948 book "How to Stop Worrying and Start Living," Dale Carnegie includes an anecdote about Leon Shimkin, who was then a general manager at publishing house Simon and Schuster.

Shimkin told Carnegie that he'd devised a way to drastically cut meeting times: He informed his team that they couldn't present any problems unless they'd first tried to think of a solution.

Impress your boss with your problem-solving skills (and spare everyone from hearing you drone on) and only bring dilemmas to meetings when they've proven absolutely unsolvable.

Always demonstrate your value to the company

Your boss doesn't need to hear about how you want a promotion because you want a more prestigious title. If you're asking for anything - a title bump, a raise, or more responsibility - show how it will benefit your boss, and the organisation as a whole.

As counterintelligence expert Robin Dreeke previously told Business Insider, you always want to ask yourself: "How can I inspire them to want me?" Sometimes it's not enough to do stellar work. If you want your boss to love you, you'll have to demonstrate how you're critical to their personal success - and the company's.

Tweak your communication style to match theirs Again, part of your job is to make your boss' job easier.

As professor Michael Watkins told the Harvard Business Review, it's on you to find out early on how your manager prefers to communicate. Is it Slack? Email? Face-to-face conversations? And how often should you check in?

Watkins also said that if there's a mismatch between your style and your boss' style - for example, one of you prefers to check in more often - it's important to have an open conversation about that. You might be wary of asking your boss anything - whether it's how they got to this point in their career or which marketing strategy they think you should go with.

But research from Harvard Business School suggests that asking for advice doesn't make you look stupid - it can make you seem more competent, which is presumably how you want your boss to see you.

In one experiment, 170 university students worked on a series of computer tasks and were told they would be matched with a partner who would complete the same tasks. (The partner was really a computer simulation.) When they'd finished the tasks, the "partner" either said, "I hope it went well" or "I hope it went well. Do you have any advice?"

Remember, too: It's better to ask for their advice than their opinion. As psychologist Robert Cialdini previously told Business Insider, asking for advice creates a partnership between you and your boss and encourages them to be more supportive of your idea.

On the other hand, when you ask for their opinion, they take a step back and become more of an objective evaluator.

Get to work early Research from the Michael G. Foster School of Business at the University of Washington suggests that employees who get into the office early are generally perceived by their managers as more conscientious and receive higher performance ratings than employees who arrive later.

And it doesn't matter if those who get in later stay later, too.

If you feel that you'd be more productive working from, say, 10 a.m. to 6 p.m. instead of 9 a.m. to 5 p.m., consider explaining the situation to your manager and confronting their potential "morning bias" head-on. "Managing up" is a term for learning what your boss really cares about and making sure you deliver on that.

As Dave Kerpen, founder and CEO of software company Likable Local, previously told Business Insider, "It's about helping your manager look great to his or her manager. And ultimately by doing that you're going to position yourself better for success."

Kerpen expects his team at Likeable Local to manage up to him. For example, he doesn't care that his head of marketing shows up late almost every day - as long as she's on time Monday morning, delivering a great report at the company-wide meeting.

Kerpen recommends either asking your boss directly what's important to them or subtly trying to figure it out on your own. According to their findings, there's one behaviour that can make employees stand out (to their boss and the rest of their coworkers): Setting stretch goals.

In other words, Zenger/Folkman execs write in The Harvard Business Review, top employees "set - and met - stretch goals that went beyond what others thought were possible."

Interestingly, most people didn't realise that high goals were so important, suggesting that setting stretch goals is meaningful because it's not expected. If you consider yourself more of a big-picture person, you'd best start attending to the small stuff, too.

Ryan Holmes, CEO of Hootsuite, wrote in a LinkedIn post that at his company, "even what seems like a small technical glitch can end up affecting a lot of clients in a short period of time. An employee who can be trusted to catch such small errors truly begins to stand out among the crowd." Expressing gratitude for your boss' feedback - even if it's negative - can make them feel warmer toward you, according to a 2011 study from the University of Southern California.

In one experiment, about 200 undergrads were told that they had been assigned a partner and were supposed to review a draft of instructions the partner had written about how to assemble parts of equipment. (In reality, there was no partner and the instructions had been written by the experimenter.)

When the experimenter returned notes from the "partners," some said, "I just wanted to let you know that I received your feedback on my draft." Others said the same thing, along with, "Thank you so much! I am really grateful."

As it turns out, participants in the supervisor position who'd been told they weren't that competent were nicer when their partners were grateful.

When their partners weren't grateful, the supervisors whose competence had been threatened were more likely to respond by denigrating those partners, saying they were unintelligent, incapable, and incompetent. You might say gratitude prevented the threatened supervisors from acting like jerks. According to analysis by Oxford Economics for Project: Time Off, workers who take all their vacation time are 6.5% more likely to get a promotion or a raise than those who leave over at least 11 days of paid vacation time.

Of course, that doesn't mean taking a vacation directly causes you to get a promotion - it could be the case that better workers feel they're more entitled to a vacation.

But as Shawn Achor, author and CEO of GoodThink, Inc., writes in The Harvard Business Review, these findings do suggest that working yourself to death doesn't necessarily lead to success.

"The extra face time doesn't help you," Katie Denis, senior director of Project: Time Off, told The Boston Globe. "There's something to this 'refreshed thinking,' too. Vacations allow you to be more creative.'"

It's hard to imagine that your boss wouldn't appreciate your increased creativity post-break. 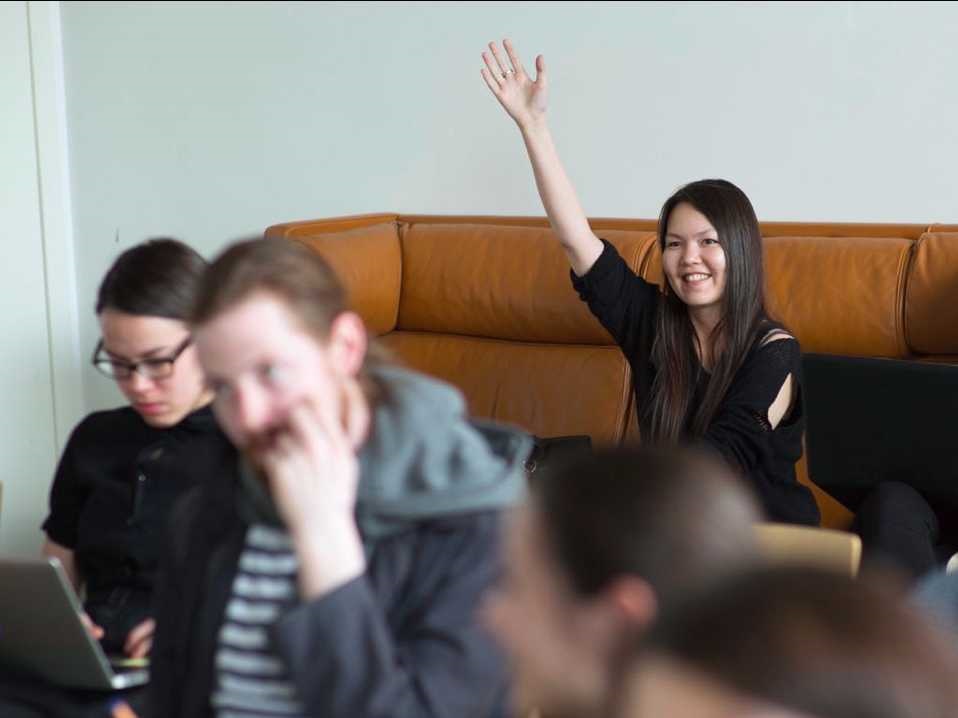 Don't hide your opinions from your coworkers.

Jenna Lyons, president and executive creative director of J. Crew Group Inc., told Motto that she advises people to share their perspectives: "I find it impossible to understand where a person stands if they don't join the conversation."

Don't be afraid of looking stupid, either. As Lyons said, you should "never be afraid to pitch an idea; we all have good ones, and we all have bad ones."