I made KFC at home using a copycat recipe, and it tasted just like the real thing I'm not a die-hard KFC fan, but I do consider myself a connoisseur of fried chicken.

Back in April, I spoke with Dan Fell, a home cook who spent 18 months developing a copycat KFC fried chicken recipe. He told Insider that he made the chicken more than 30 times before he deemed it good enough to be in the same category as the fast-food chain's.

While I'm at home experimenting - which sometimes means failing - in the kitchen, I think now is a great time to try my hand at the fryer. And though I was intimidated at first, after giving Fell's recipe a try, I'm excited to get to work on my own fried chicken creations.

Here's how my attempt at Fell's KFC fried chicken went.

Dan Fell posted his recipe for a home-cooked version of KFC fried chicken on Twitter, and I knew I had to give it a try. Dan Fell, a UK-based digital marketer, spent 18 months perfecting his at-home recipe for KFC fried chicken. After speaking with Fell about his process, I decided to try the recipe for myself.

Before this experiment, the only thing I had ever deep-fried was a batch of potato chips. They came out beautifully, but everything reeked of oil after I was done. With chicken, however, there are a lot more factors to consider - like undercooking the meat or getting the coating just right - and I was acutely aware of that.

Perfect fried chicken is also a huge point of pride for cooks and chefs. There are restaurants serving up family recipes that have been passed down for generations or that have taken years to perfect in the work space of a restaurant's kitchen. I felt silly trying to make it at home. But, everyone has to start somewhere!

Fell shared the recipe in a video on Twitter, so I watched it back before I started cooking and made sure I had all the right ingredients. 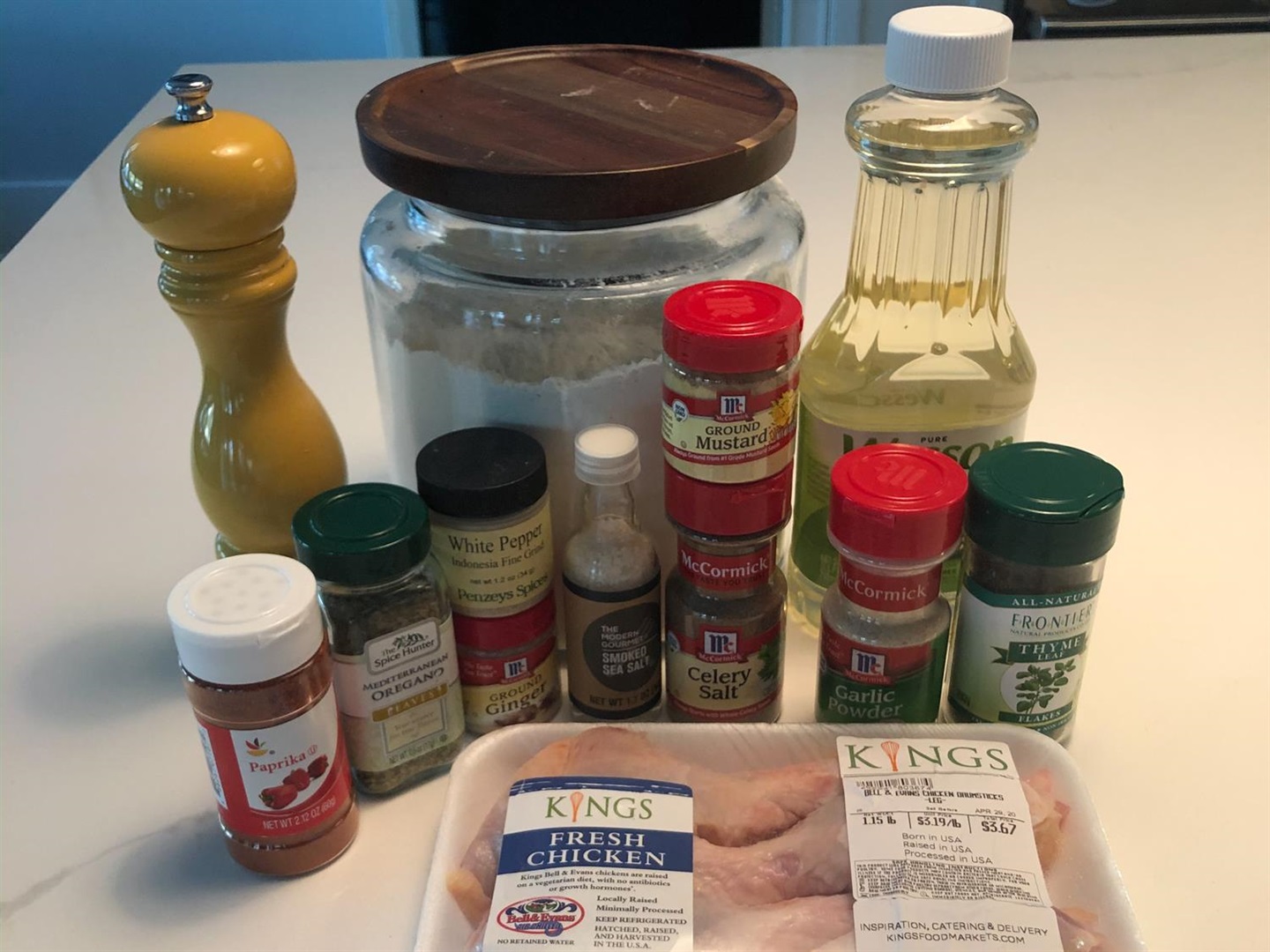 His video names each spice along with the called-for amount. It also says there should be 5 cups of flour for dredging.

In the video, Fell mentions that the coating should be three parts regular flour to one part self-raising flour. I was only making four pieces of chicken, so I used around 2 cups of all-purpose flour and 1 cup of self-raising flour.

I mixed all the coating ingredients together in a dish large enough to toss the chicken in. Filled with spices, the coating took on a speckled red colour that looked like it would give the chicken a burst of flavour.

Next was the egg wash. Fell called for egg whites and milk for this combination. He didn't specify how many egg whites or how much milk to use, so I eyeballed it.

I was making four pieces of chicken, so I used three egg whites and around 2/3 cup of milk. I whisked the two ingredients together with a fork in a smaller dish that also fit the chicken.

After I had my mise en place — all my ingredients measured out and set up — it was time to set up the frying oil. 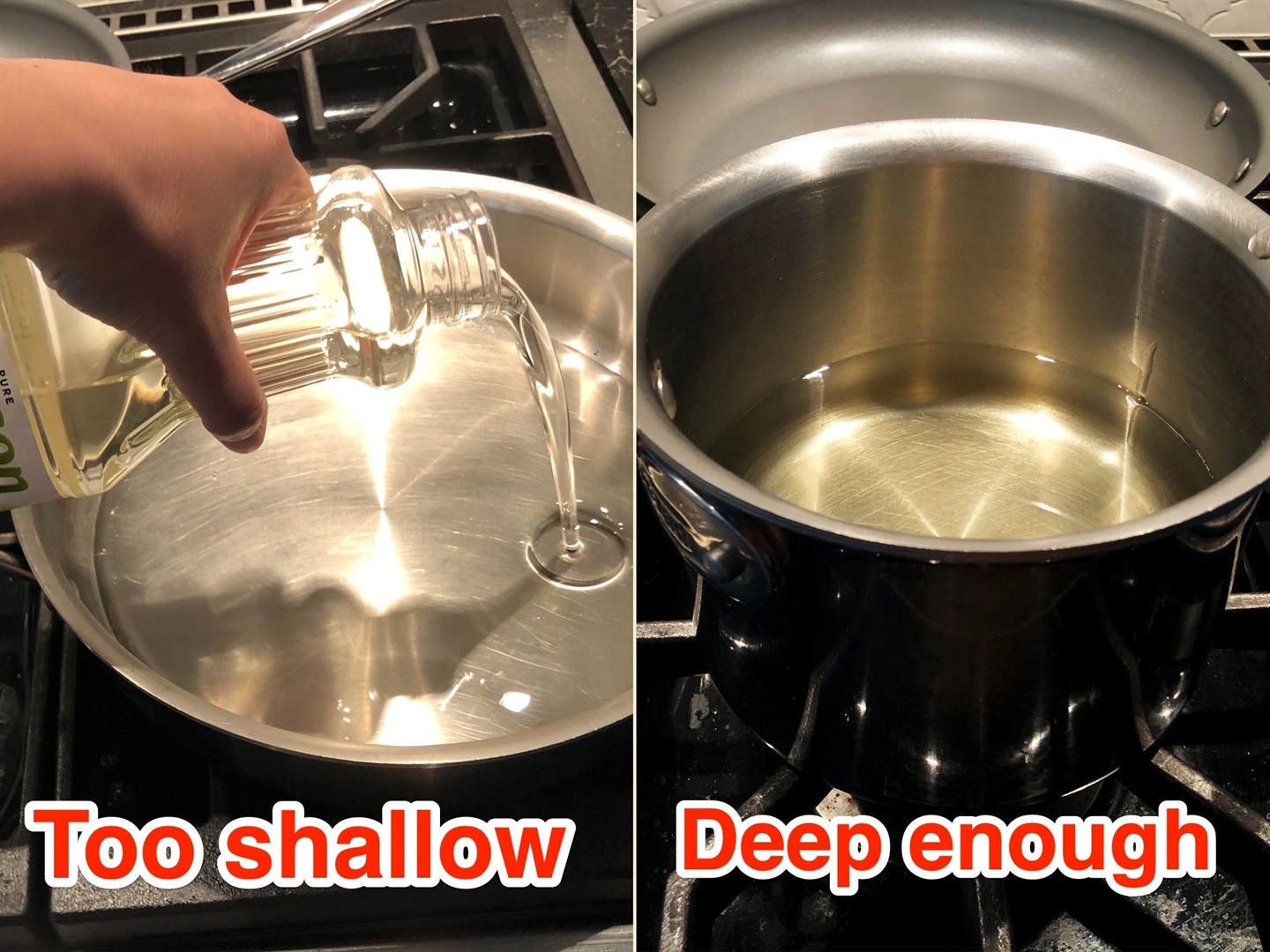 Fell told Insider that any neutral oil would be best for frying. I went with canola simply because it was the cheapest at the store.

I thought about what cooking vessel I should use here. I've fried chicken cutlets in a shallow pan before, but I don't typically aim to submerge them at all like I did with these drumsticks.

First I picked out a large deep pan for this test, but after dumping all of my oil into it, I realised it was too shallow for the pieces I was going to cook. (Tip: Hold onto the empty oil bottle; you'll need something at the end to help you dispose of your greasy, used oil.)

I poured the oil into a small pot which was perfect. I was able to cook the chicken one piece at a time completely submerged in the oil - it was kind of like I made my own little deep fryer.

The next oil obstacle was figuring out when it was hot enough. Fell said the oil should be around 325 degrees Fahrenheit (162.5 degrees Celsius). He told Insider that getting the right cooking temperature was one of the parts of the recipe that took him a while to perfect.

I don't own a thermometer that can be used for oil, so I was in a bit of a pickle. I did some ferocious Googling and found that many home cooks recommend using the handle of a wooden spoon to test oil.

If you stick the long end of the spoon into the oil and little bubbles start to form around it, you're good to go. If the bubbling is aggressive, chances are your oil is too hot.

I found that teeny tiny bubble clusters were my sweet spot with this recipe. Thank you, internet!

Fell's coating method was specific: Flour, then egg wash, then flour, then fry.

I coated my first piece of chicken as instructed and it looked beautiful. Then, I dipped it into the hot oil and was amazed at how non-explosive it was.

The oil bubbled immediately around the chicken, but it was a contained rolling bubble. I was mesmerised.

So I had learned that the oil likely wouldn't splash up into my face, but I was still cautious of the temperature.

I knew there was a chance that the hot oil would create a golden exterior before the interior was finished cooking. The last thing I wanted was to get myself or my family sick from raw chicken. At the same time, I didn't want to overcook and burn the outside. Playing with the heat on this first piece was important.

The recommended cooking time is five to six minutes, according to Fell's video. For piece No. 1, I set a timer for five minutes and let it do its thing.

When I fished the golden drumstick out of the oil with a sieve, I thought it looked beautiful. But, I had to make sure it was cooked.

I cut through the meaty part of the chicken and I saw some blood pool on the coating. It was also on the knife I used when I pulled it back. That was enough to tell me it was not cooked.

I set my timer to six minutes for round two and tried again. When the timer went off, I lingered a little bit before pulling it out - so it was probably in the oil for almost seven minutes.

Cutting into piece No. 2, there was no bloody mess, but slicing off chunks of meat close to the bone revealed some still-spilling veins.

There aren't many things about the kitchen that scare me but eating raw chicken definitely does. I wasn't taking any chances.

As it turns out, the third time is really the charm. I retested my oil to make sure it was still hot enough, but not too hot. I dropped piece No. 3 and set my timer for seven minutes.

When it rang, I lifted the chicken out to take a look. The coating looked great, but it didn't look like it was close to burning. So I decided to drop it again for another three minutes.

Checking in on it at the now 10-minute total mark, I saw that the skin still wasn't blackening - which meant I could let it cook even longer. I wanted to give it the best chance at coming out as fully cooked as possible, so I dropped it for a third time and pulled it out five minutes later totaling a cook time of 15 minutes.

Piece No. 3 was cooked well and still had all its juiciness. When I cut into this drumstick all I saw was cooked dark meat chicken. I gave it a taste and the coating was super flavourful without a hint of a burnt taste. I nailed piece No. 3, but it only counts if I can do it again, right?

I dredged the final drumstick in the flour coating, dropped it in the pot, and set the timer for 15 minutes. 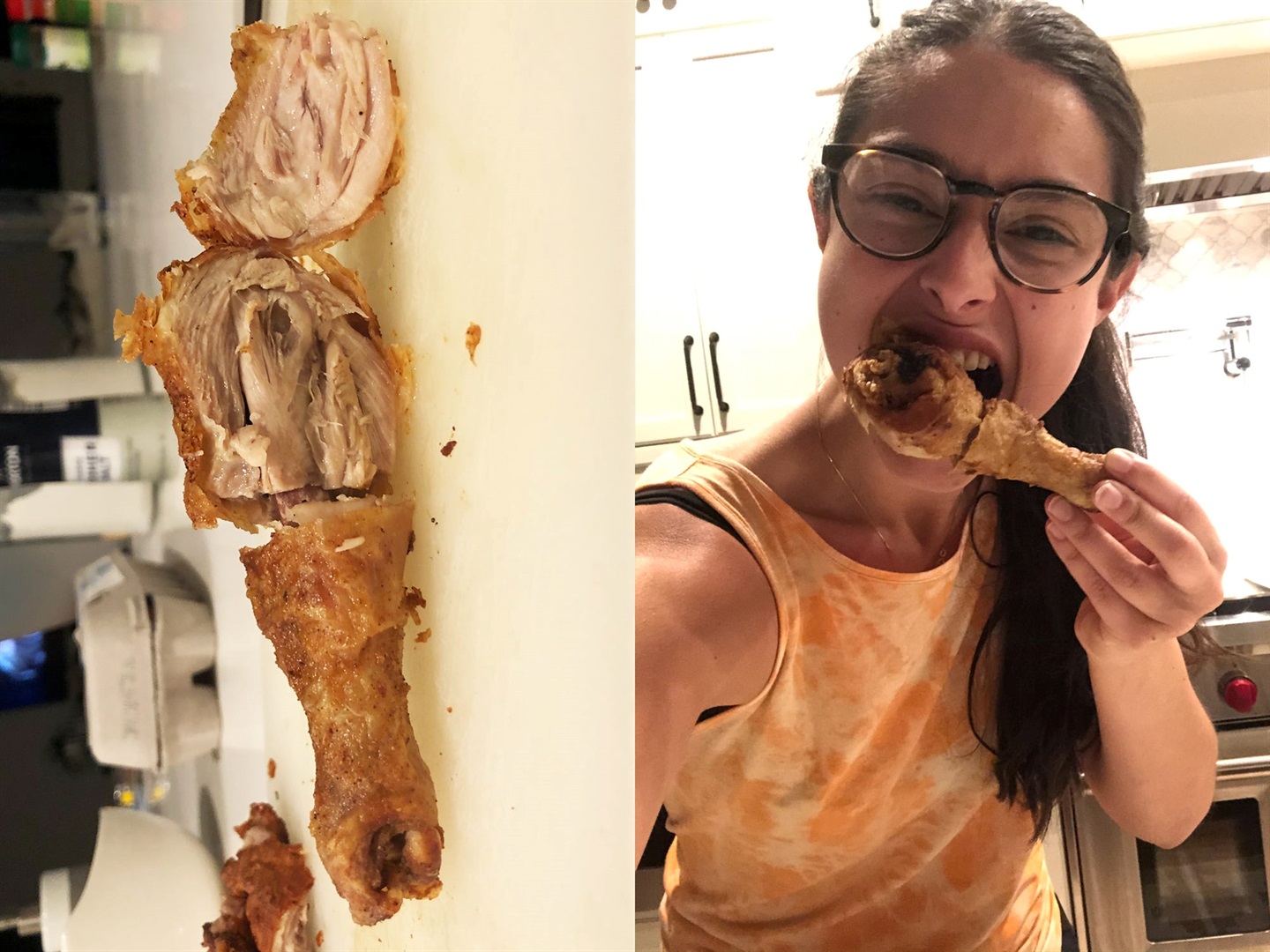 The moment after I dropped it in, I looked at my counter and realised I didn't dip this one in the egg wash or the second coating of flour!

I was disappointed in myself - a classic example of messing up when you start to get a little cocky - but I figured the coating part of this experiment was done anyway. I had to move on.

I pulled piece No. 4 out at 15 minutes and cut into it to reveal another perfect cook. Thank goodness! That was my last piece of chicken.

With two out of four pieces of chicken perfectly cooked, I took stock of everything I learned from this experience — including how important it is to season the raw chicken properly. While I thought my drumsticks looked stunning, they were missing those waves of flaky, fried coating that KFC's chicken has. That being said, I think mine was just as flavourful.

I also would recommend seasoning the meat heavily before frying. Fell mentions seasoning with salt briefly in his tips, but if you're not paying close attention you'll likely miss that note. I seasoned my meat lightly with salt, but I would recommend at least a palm-full of salt and another of black pepper. That will help the chicken itself retain flavour after it's been cooked.

I also realised that cook time is very subjective. While five or six minutes may have worked for Fell, it wasn't enough for me. I found my sweet spot at 15 minutes, so I'd recommend testing out the first piece before making the whole batch if you're planning to make this at home.

My final thought: The cleanup is more strenuous than actually making the chicken. The experience I had actually making this chicken recipe was awesome. I had a ton of fun and it was relatively easy.

But, the cleanup was enough to make me never want to fry chicken again.

I usually don't mind cleaning up that much, but this was on a whole other level. The two dredging containers, pot, sieve, wooden spoon, drip-filled resting pan, cutting board, knife, counter space, and oil-spattered stovetop proved an unenjoyable end to this experience.

Whatever you do, be sure to not dump the oil into your sink - since it was used to cook chicken, there's some grease in there which will solidify in the pipe and could create a blockage. Instead, I poured it into a bowl and let it cool down overnight. In the morning, I poured it back into the original bottle, which was empty, and threw it away.