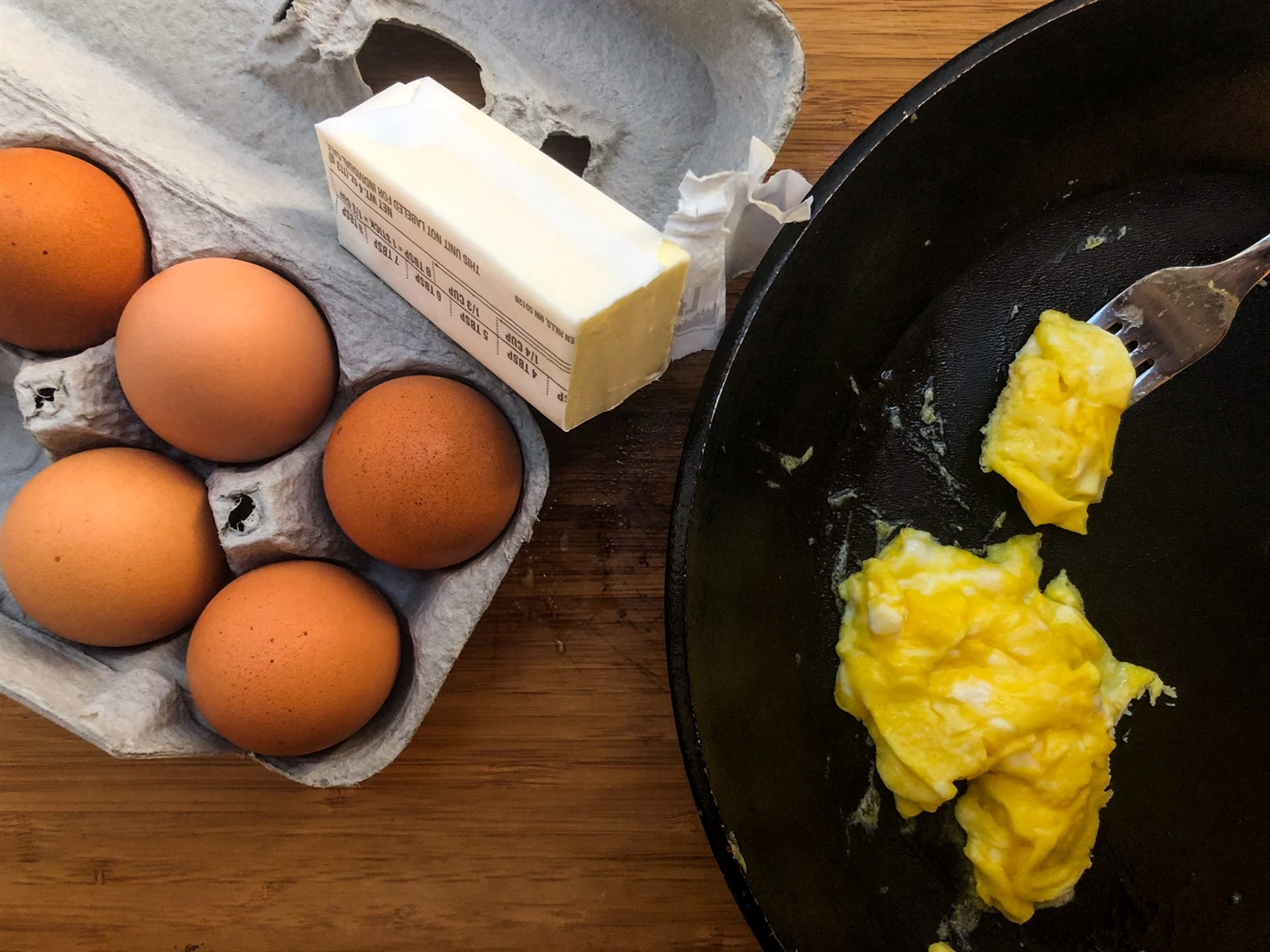 There are loads of ways to make scrambled eggs.
Rachel Askinasi/Insider

Fried eggs are a go-to breakfast food for me, along with hard-boiled eggs when I'm in a rush. But before I discovered my love of runny yolks, scrambled was the only way I'd eat eggs as a kid.

There are plenty of ways to cook scrambled eggs and have them come out rich, silky, and creamy. In an effort to find the optimal way to enjoy scrambled eggs, I made the dish using 10 different cooking methods and kept track of the results.

While I gathered tips from different food writers and chefs, I stuck with a simple Food Network recipe as my base to keep things consistent. I used one large egg per batch and cooked each one on a nonstick pan with butter over a very low flame, unless otherwise stated below. Each egg took around one minute to cook, on average. I also tried Chef Gordon Ramsay's method of using a small pot, high heat, and crème fraîche.

From changing the level of heat to adding liquids like heavy cream, here's what happened. This egg cooked quickly and browned easily. After about 45 seconds, the scrambled pile was fully cooked through with no sign of runny residue, but it didn't feel rubbery like some overcooked eggs do.

The flavour of butter was only slightly detectable and it mostly tasted like cooked egg yolk.

If you're someone who doesn't like runny eggs, this cooking method is for you.

Cooking over low heat made for a creamy, custardy egg. The low heat combined with pushing the egg around often on the pan yielded a silky, creamy top layer, but a firmer and more fully cooked bottom layer.

The buttery top was delicious in flavour. This would be a great cook method for someone who likes fully cooked eggs, but also appreciates the texture of a runny yolk.

Scrambling the egg in the pan instead of in a bowl beforehand made for a less cohesive dish. I didn't scramble this egg until it was in the pan. Since I couldn't whisk as well in the pan as I could in a bowl, there were inconsistencies in the texture. Bits of cooked yolk looked yellow and bits of whites were solid and bright. It kind of looked like egg salad.

The texture was nice and fluffy, though, which was pleasant to eat.

The buttery taste came through here, but the underdone parts felt more raw than creamy. In order to keep this egg from frying, I had to keep moving it around constantly. I would recommend removing the egg from the heat before you think it's done as it seemed to cook quickly on the bottom toward the end.

Letting the butter turn brown in the pan affected the colour of the eggs more than the taste of them. This egg cooked within seconds even on low heat.

The burnt butter didn't give the egg a specific taste, but it did give it a unique colour. Though the egg mostly had was a pale-yellow hue, some spots had a brown layer on top.

Since this didn't add much, I'd say browning your butter for a scrambled egg isn't worth the extra time.

Putting the butter in the pan at the same time as the eggs made for a creamy scramble. This batch turned out creamy on top and in the middle. The colour was more of a pale yellow compared to the colours of the other batches, and the bottom didn't turn brown.

I thought the flavour of butter would be more potent than it was. I was able to taste it, but it wasn't overwhelming at all.

While I wouldn't call these eggs fluffy, they were somewhat light.

Adding heavy cream muted the flavour of the eggs. For this version, I added one tablespoon of heavy cream to my beaten egg before pouring it into the pan.

The egg was fluffy but denser than I expected. It had a creamy texture throughout and took a bit longer to cook than the other batches.

One negative effect of adding the cream was that it seemed to dilute the flavour of the egg. If you're adding heavy cream, you may want to be more heavy-handed with the seasoning.

Adding whole milk to the scrambled eggs made them wet. Adding one tablespoon of whole milk diluted the egg's flavour and left me with a pile of wet protein.

The scrambled egg had a consistency reminiscent of curdled milk, which wasn't pleasant. Like the batch made with heavy cream, this egg took longer to cook than some of the others.

After trying different versions, I won't be adding milk to scrambled eggs again.

Adding low-fat milk was pointless and made for bland, wet, inconsistent eggs. I think the low-fat milk I used in this variation did more harm than good.

It made the scrambled egg watery, but it also seemed to separate the components of the egg from each other. The cooked bits were noticeably solid while the soft parts were wetter than they should have been.

There was no silky texture and no flavour. If you're going to add dairy to your eggs, I would recommend going with the heavy cream.

Using vegetable oil instead of butter to grease the pan left the eggs without their custardy texture. 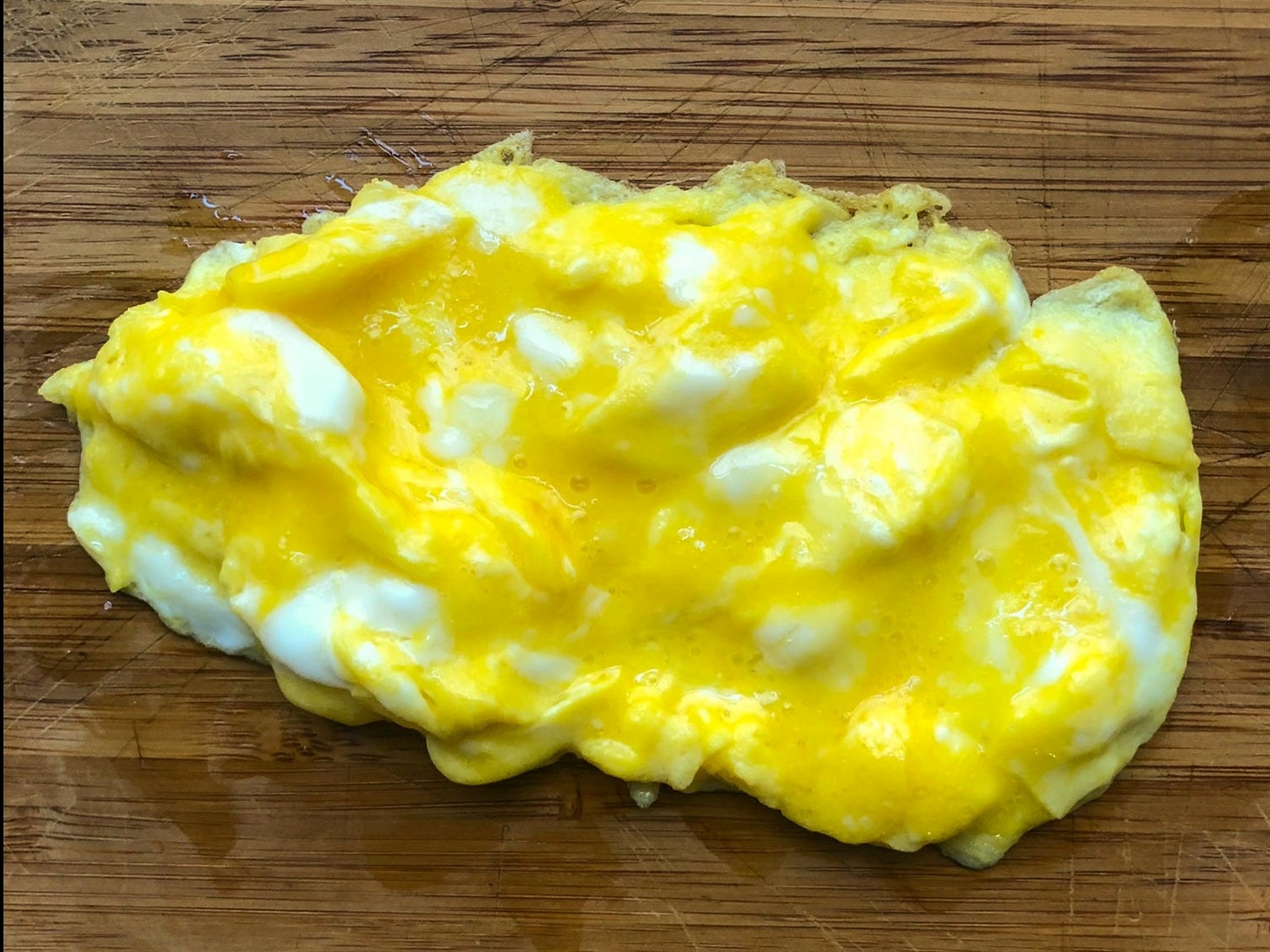 For this batch, I used vegetable oil to coat the pan instead of butter. I kept the oil on a low heat so it wouldn't fry the egg. It made for an enjoyable texture that was slightly moist but also firm.

Although the texture was appetising overall, the parts that were wet were a little more liquidy than custardy.

Though I missed the buttery flavour in these eggs, using vegetable oil is a good substitute if you're out of butter. When I first watched the videos of chef Gordon Ramsay making his iconic scrambled eggs, I thought they looked too wet to be considered scrambled eggs.

The "MasterChef" judge uses a method of cooking where he is constantly stirring the eggs - which he cracks right into the pot with a pat of butter - over a medium flame in 30-second intervals. He makes it a point to take the pot off the flame, stir, and put it back on; repeating the process until the eggs come together cohesively. Once they're done, Ramsay adds a dollop of cold crème fraîche to halt the cooking process.

This method required a lot of elbow grease, but it was worth it. The eggs were decadent - they were rich both in flavour and texture - and soft without being watery.

At the end of the day, I learned that scrambled eggs take a lot more care than I imagined to make them delicious. 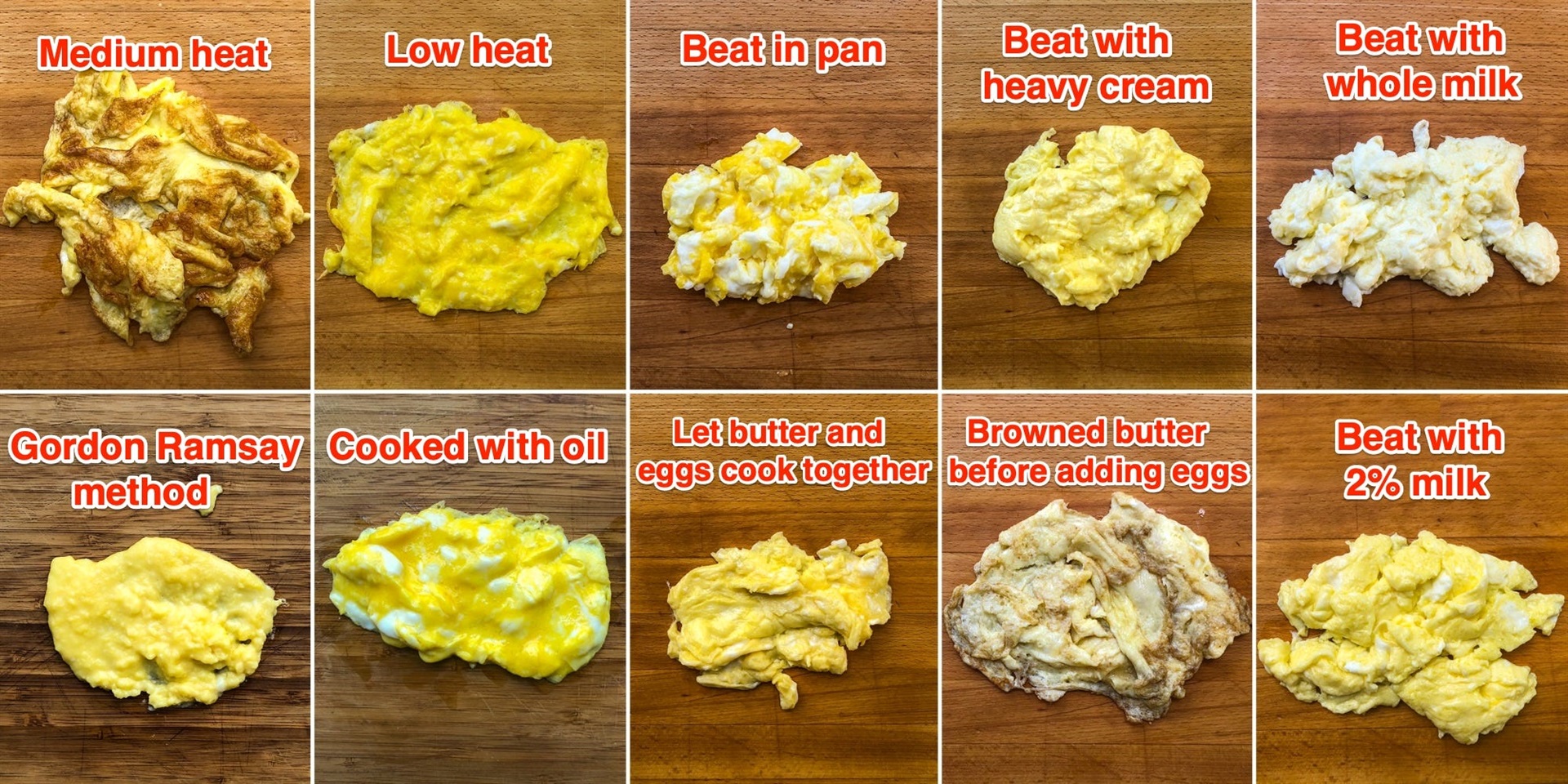 I didn't realise how changes as small as whisking eggs before or after they hit the pan could really affect something so simple as scrambled eggs.

I used to just push the eggs around the pan until they were fully cooked, but now I know that the art of the custardy egg is worth practicing.

After trying 10 variations, I think adding liquids like milk to the eggs before pouring them into the pan makes them wet and flavourless. Heavy cream keeps the eggs fluffy, but it still mutes the flavour.

I was pleasantly surprised by Gordon Ramsay's method for scrambled eggs. While I wouldn't make his eggs on a rushed morning before work, I would consider putting in the effort for a nice brunch or weekend breakfast.

Regardless, all of these eggs would taste just fine on a roll with hot sauce.