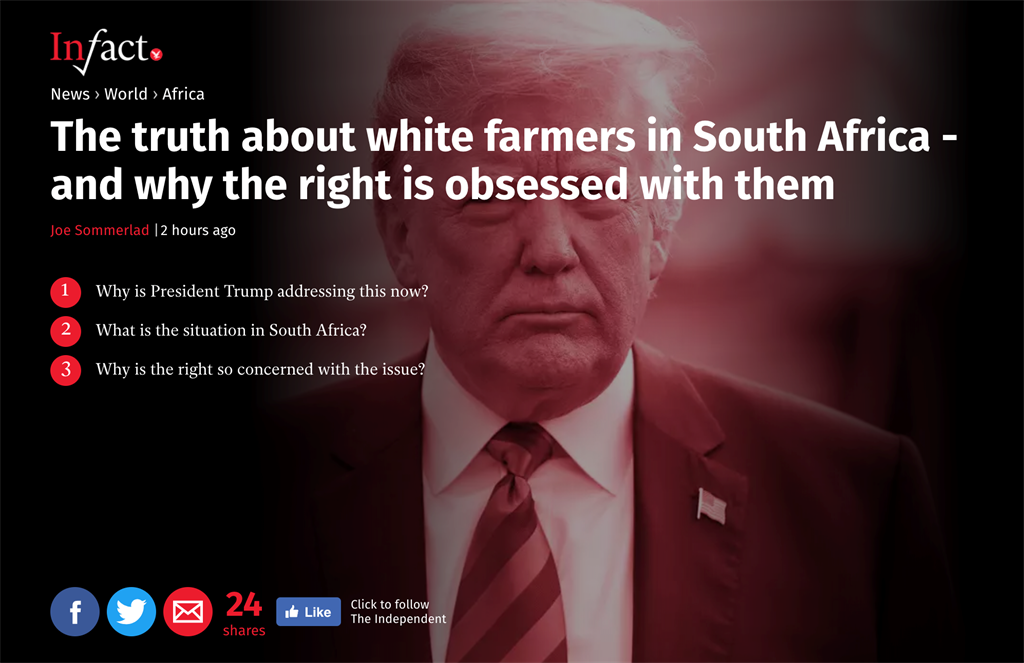 US president Donald Trump unleashed a tweetstorm on Thursday morning when he falsely claimed that farm seizures and the “large-scale killing of farmers” are taking place in South Africa.

Trump tweeted shortly after 03:30 South African time that he asked his secretary of State Mike Pompeo “to closely study” land and farm seizures in South Africa.

I have asked Secretary of State @SecPompeo to closely study the South Africa land and farm seizures and expropriations and the large scale killing of farmers. “South African Government is now seizing land from white farmers.” @TuckerCarlson @FoxNews

The comments drew harsh criticism from South African citizens and institutions alike, with the South African government claiming that Trump’s tweet sought to “divide our nation and reminds us of our colonial past”.

South Africa totally rejects this narrow perception which only seeks to divide our nation and reminds us of our colonial past. #landexpropriation @realDonaldTrump @PresidencyZA

This is how international publications covered Trump’s tweet about South Africa.

CNN: Killings of farmers at a 20-year low

CNN, whose website has over 200 million unique browsers globally monthly, highlighted that Trump’s statement contradicts official statistics which states that farm murders are at a 20-year low in South Africa.

Jerusalem-based Times of Israel wrote that Trumps’ tweet echoed a commonly held belief among white nationalists who see the murder of white farmers in South Africa as a “genocide.”

Global wire service Reuters reported that South Africa remains a country that is deeply racially divided and unequal nearly a quarter of a century after Nelson Mandela swept to power at the end of apartheid, and that Trump’s comments were supported by right-wing organisations such as AfriForum in South Africa.

BBC: No farms have been seized Britain's public broadcaster the BBC reported that no farms have been seized since the ANC came into power in 1994.

“The constitution has not yet been changed and … the ANC has been following a willing-buyer-willing-seller module to redistribute land.” Around 10% of land in white ownership has been transferred to black owners in this way, the BBC said.

London-based Financial Times reported that activists believed land reform is a “red-herring” given other thorny challenges such as failures to support black farmers, reform exploitative tenancy laws, and tackle the abuse by traditional chiefs of land they own. Britain's Independent reported that on “one of the darkest days of Donald Trump’s presidency”, with his administration once mired in scandal after his former lawyer confessed to contravening US campaign finance legislation, the president executed a surprise handbrake to tweet about South Africa. The influential Time Magazine wrote that the US State Department has been following land reform in South Africa very closely for some time.

“South Africans are dealing with the difficult issue of land reform through an open process including public hearings, broad-based consultations, and active civil society engagement,” the statement read.

The New York Times highlighted that certain white South Africans believe that farm killings are underreported, politically motivated and part of a conspiracy to rid the country of white residents.

“AfriForum, a right-wing minority rights group, has lobbied internationally — including in Washington — to draw attention to farm homicides and what it calls the ‘racist theft’ of land,” the publication wrote.

The Guardian: All major political parties in South Africa have agreed there is a need for extensive land reform

The Guardian in the United Kingdom reported that Ramaphosa, a pro-business moderate, has sought to reconcile demands for radical land reform from the left of the ANC and the populist EFF party with the need to attract foreign investment to boost a flagging economy.

“Almost 25 years after the end of apartheid, the land issue has become a focus of economic and social grievances in what has remained one of the most unequal countries in the world,” the publication said.

Related Links
Trump doubles down on claims that China and the EU are currency manipulators and warns: 'I'll...
Trump is reportedly preparing to weaken the dollar — here's why it will be nearly impossible
Trump reportedly tries to call world leaders at odd hours and has to be reminded of time zones on...
Next on Business Insider
FBI and MI5 warn on threats from China - say UK disrupted cyberattack on 'critical' aerospace firms