SpaceX is about to attempt a new first: launching a spaceship full of people who aren't professional astronauts into orbit.

The four-person crew consists of a billionaire, a physician-assistant, an engineer, and a scientist. On Wednesday, weather permitting, they'll climb aboard a Crew Dragon spaceship atop a Falcon 9 rocket, then roar into space. They're set to orbit Earth for three days, enjoying the views and collecting data for scientific research, then plummet back through the atmosphere and parachute to a safe landing. They call their mission Inspiration4.

Billionaire Jared Isaacman chartered the flight from SpaceX and is both footing the bill and commanding the Crew Dragon spaceship. He gave the other three seats to Hayley Arceneaux, who survived bone cancer as a child and now works at St Jude Children's Research Hospital; Chris Sembroski, an Air Force veteran who works for Lockheed Martin; and Dr Sian Proctor, a geoscientist who serves as an analogue astronaut in simulations of long-term Mars missions.

The crew isn't just climbing into the spaceship like you or I might board a plane. They've spent the last four months training - studying manuals, pushing their bodies to new limits, and practicing for worst-case scenarios. They completed the training, which is largely based on NASA's program, this week.

Even though Isaacman has spent thousands of hours flying jets and ex-military aircraft, he told Insider that the astronaut training was "more intense" than he expected. "I definitely underestimated it to some extent," he said.

When billionaires Jeff Bezos and Richard Branson each took their own rocket rides - flights which skimmed the edge of space but did not enter orbit - neither revealed the details of their training. But the Inspiration4 crew has been sharing its preparations publicly, offering a glimpse into what it takes to prepare amateurs for spaceflight.

Step one: Meet your rocket and watch it launch Once the Inspiration4 crew was assembled, one of the first things they did together was watch SpaceX launch its third set of professional astronauts towards the International Space Station.

Arceneaux had never seen a rocket launch before. "I thought I was gonna have anxiety before the launch, but it was actually really serene," she told Axios reporter Miriam Kramer for the podcast "How It Happened." A centrifuge spins really fast to create centrifugal force that pushes things outwards, much like a salad spinner or the spinning carnival ride that presses you against a wall. That force mimics the feeling of launch, when the pull of gravity on your body feels three times its normal strength. Many astronauts and pilots use centrifuges in their training. 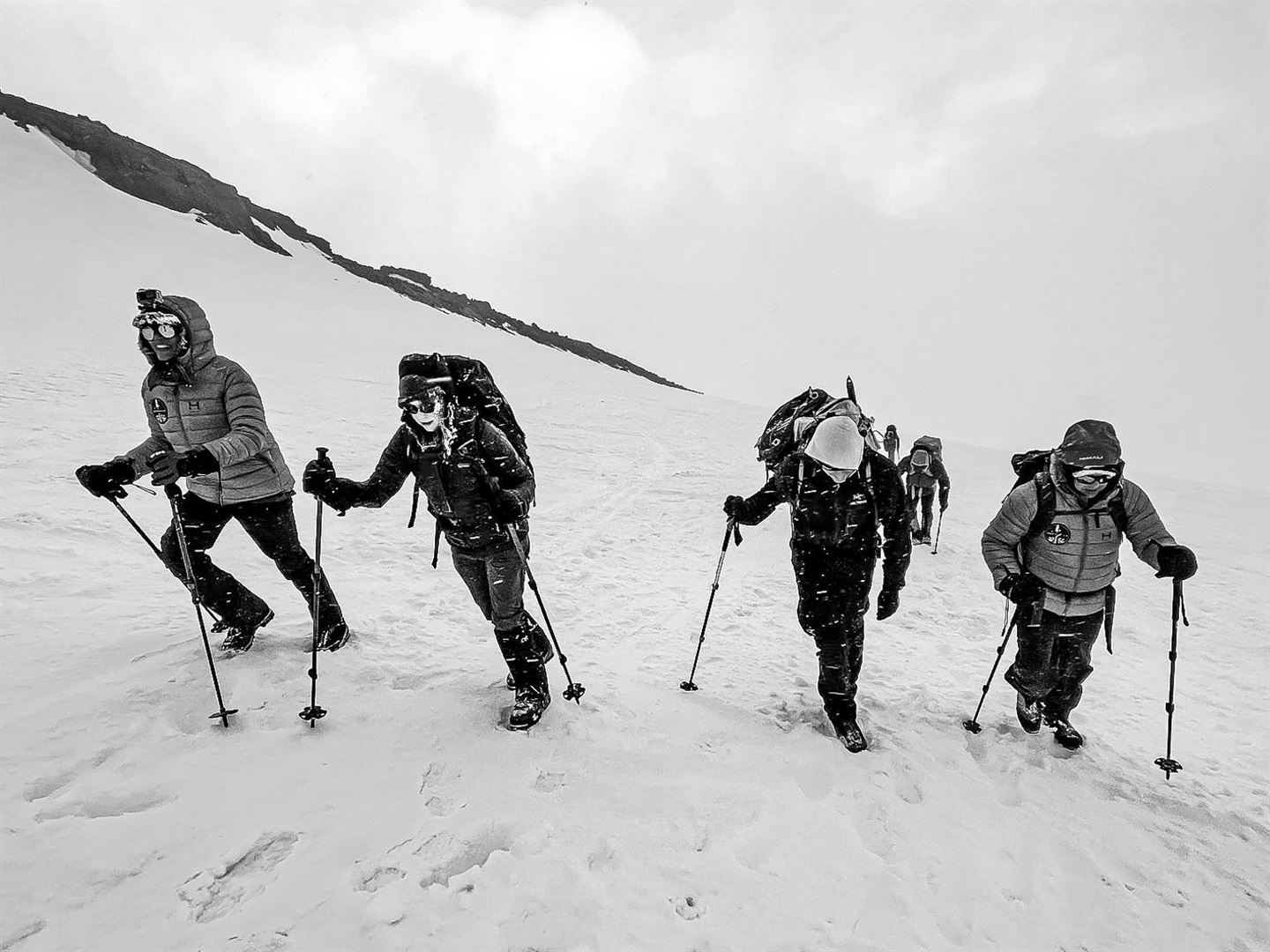 Washington's Mount Rainier is a 14,410-foot active volcano covered in glaciers, with punishing weather and hazardous crevasses. Summiting requires ice axes and crampons. So Isaacman decided it would be the perfect place to break the ice with his new crewmates. They climbed the mountain together in early May. The Inspiration4 crew poses on Mount Rainier, May 1, 2021.
Inspiration4/John Kraus

"They built some mental toughness. They got comfortable being uncomfortable, which is pretty important," Isaacman said. "Food sucks on the mountain. Temperatures can suck on the mountain. Well, that's no different than Dragon. We don't get to dial up and down the thermostat... And I can tell you the food isn't great in space, from what we've tasted so far."

After camping, it was time to hit the books The Inspiration4 crew poses in front of a Falcon 9 rocket at SpaceX headquarters in Hawthorne, California, June 14, 2021.
Inspiration4/John Kraus

After Mount Rainier, the crew flew to SpaceX's headquarters in Hawthorne, California to begin training in earnest.

"Every day was pretty much a 12-hour day, and then you were getting back to the hotel room, and you're just studying. That was kind of the intense academic portion of the training," Isaacman said.

They had to learn about the parts of the Falcon 9 rocket and Crew Dragon spaceship, how everything works, and what can go wrong.

"We have like 3,000 pages across 100 different manuals. It was a lot. I don't think any of us really predicted that," Isaacman said.

Then the crew practiced flying Crew Dragon in simulations Inside a mock Crew Dragon model, the Inspiration4 passengers practiced the procedure for launches and landings. Once they got used to how things are supposed to work when all goes smoothly, trainers started adding issues and spacecraft malfunctions to the simulation.

Some of these exercises involved all four crew members, but some were just for Isaacman and Proctor - the commander and pilot of the mission. Eventually, they were doing full simulations with mission control and a launch director.

In early August, the crew did a gruelling 30-hour simulation Isaacman, Proctor, Arceneaux, and Sembroski put on their spacesuits, climbed in the simulation model of the Crew Dragon, and sealed themselves inside for the 30-hour ordeal. Nobody knew what was coming, not even the mission controllers. A simulation supervisor had pre-programmed everything.

They practiced a regular launch, with a weather delay included. They ate a meal and slept. But as their simulated mission began to reenter the atmosphere and fall back to Earth, all hell broke loose.

The Axios podcast recounts what happened. In the simulation, as the Crew Dragon pushed itself into Earth's atmosphere, three computers failed. The crew lost touch with mission control. Then the capsule's parachutes wouldn't deploy.

"Now you're blind, you can't talk, and there's no way for the chutes to come out. There's also no way for Dragon to stabilise itself during essentially a hypersonic reentry," Isaacman told Kramer. An animation shows how the Crew Dragon capsule super-heats the material around it as it plummets through Earth's atmosphere.
SpaceX

When they got their bearings, the crew realised the simulation was sending their hypothetical capsule a continent away from its intended splashdown site.

"It felt very real. You're living in it for 30 hours. The last 45 minutes, there was awareness from us in the capsule, and them on the ground, that there is a chance that this might not be actually a survivable situation," Isaacman told Kramer.

In the end, they landed safely, but the podcast did not specify how the crew pulled it off. 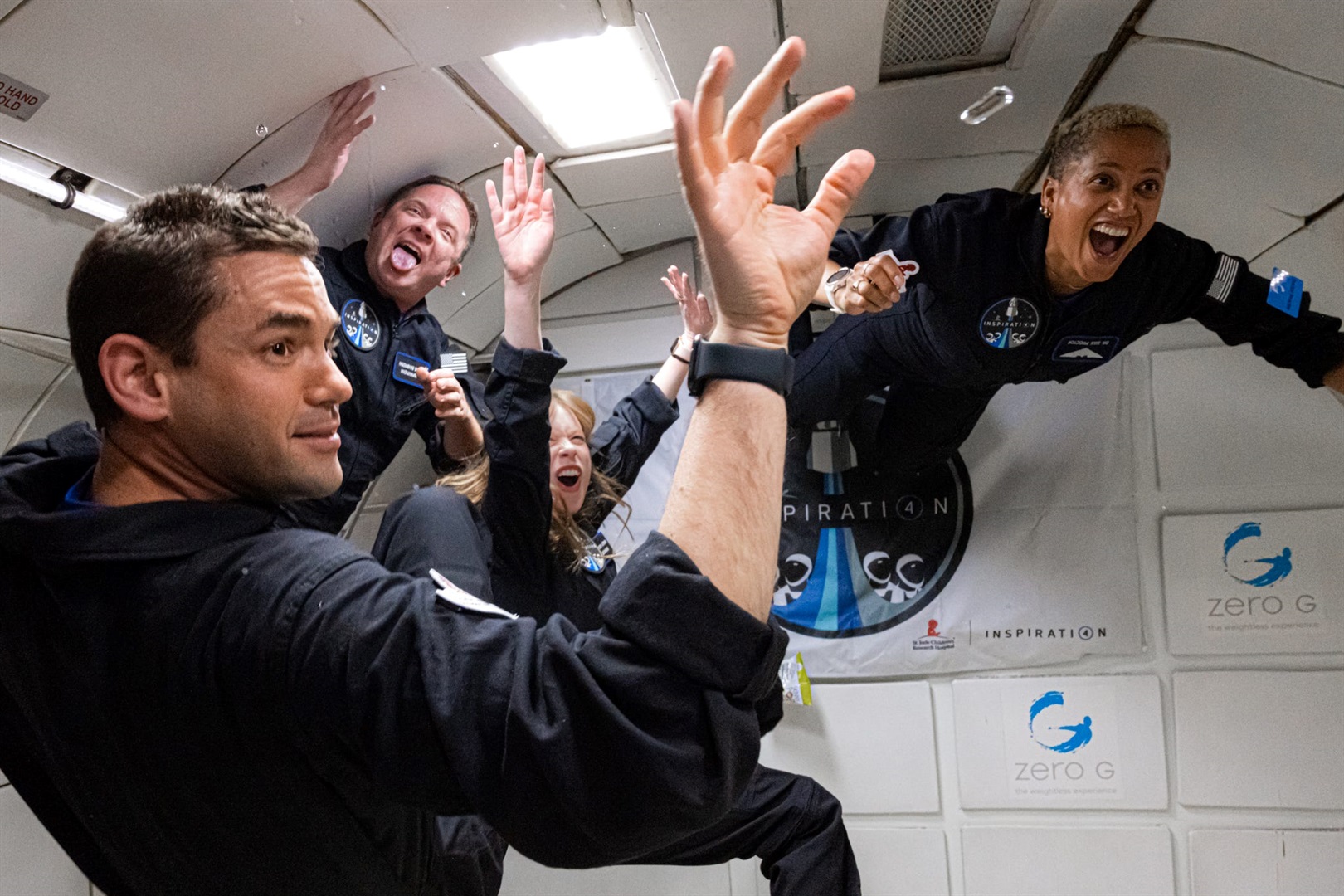 In a parabolic flight, a plane flies in arcs up and down, creating up to 30 seconds of weightlessness at the peak of the arc. Some people call the planes "vomit comets."

The team tested their bodies in a high-altitude chamber It's rare, but sometimes spaceship cabins become depressurised, just like an airplane cabin. Spaceships typically have oxygen masks on board in case this happens. But it's still helpful to know how your body will react before you slip that mask on. Being familiar with the symptoms of ozygen deprivation can also alert crew members to a cabin leak if the spaceship's systems don't detect it first.

To experience those symptoms firsthand, under supervision, the crew took to an altitude chamber that exposed them to a low-oxygen environment.

"It provided great insight into each of our various symptoms," Arceneaux said, according to a tweet from the mission's account. 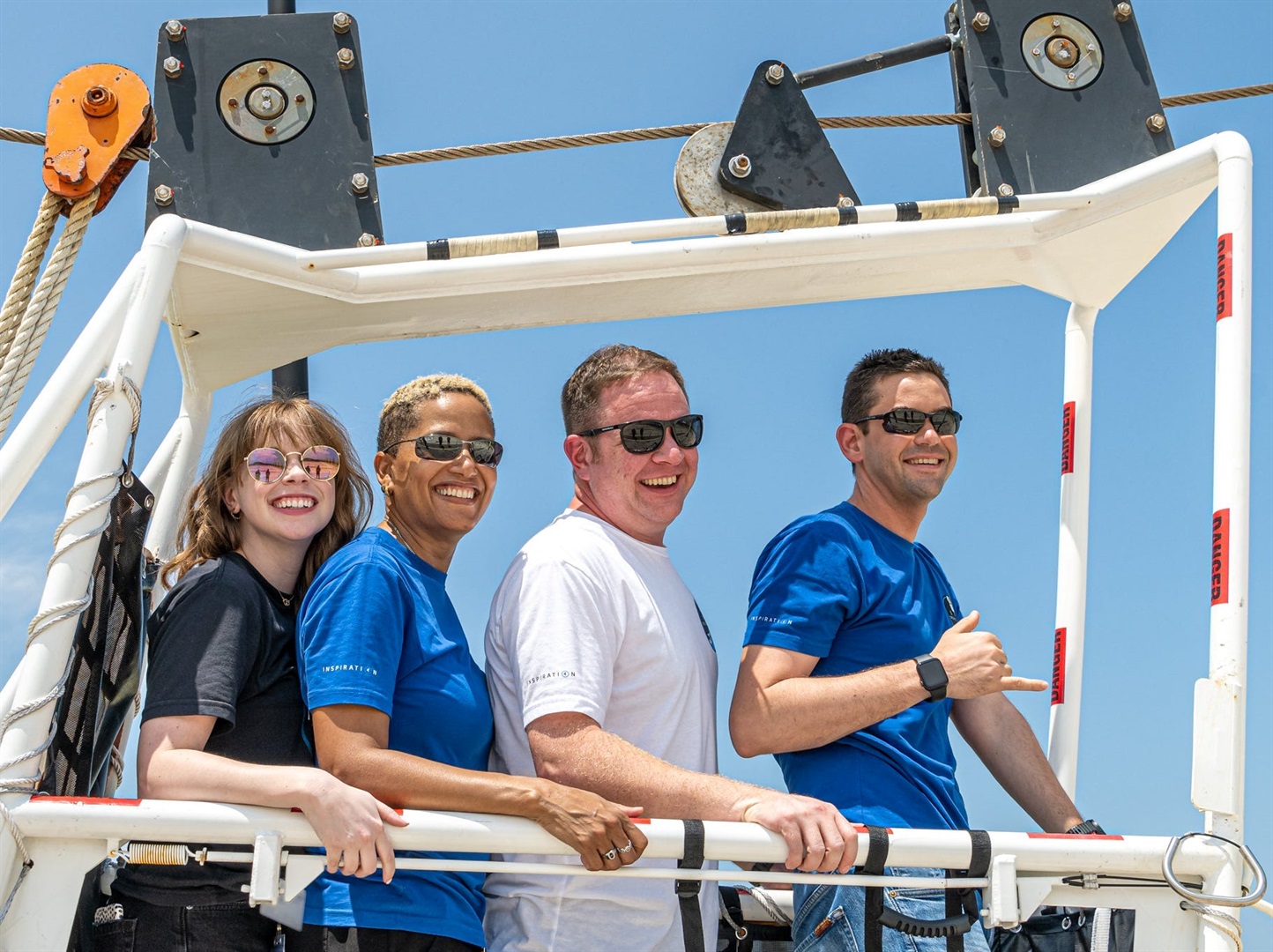 The Inspiration4 crew in a slidewire basket at Launch Complex 39A in Cape Canaveral, Florida, July 28, 2021.
Inspiration4/John Kraus

Since scientists want more information on how spaceflight affects the body, the Inspiration4 crew offered to gather biological data for NASA. In addition to taking each other's blood and skin samples, the crew will monitor their sleep, take daily cognitive tests on an iPad, and scan their organs with an ultrasound device. Isaacman said they didn't realise quite how extensive this research would be

"We were like, maybe we should have talked about this before we did it," he said.

He added that the crew members will have to take skin-cell swabs "three times a day on 10 different parts of our body." During their training period, the crew members made public appearances, did media interviews, and took trips to Space Camp and SpaceX's rocket-development facilities in Boca Chica, Texas.

That latter site, which SpaceX founder Elon Musk calls "Starbase," is where the company is building and testing prototypes of its Starship mega-rocket and Super Heavy booster. When they visited, the Inspiration4 crew members went for a plane ride high above the rockets.

Earlier in the summer, Isaacman and Proctor also did fighter-jet training in Montana to brush up on their piloting skills. NASA astronauts do the same to practice thinking and responding quickly under stress. 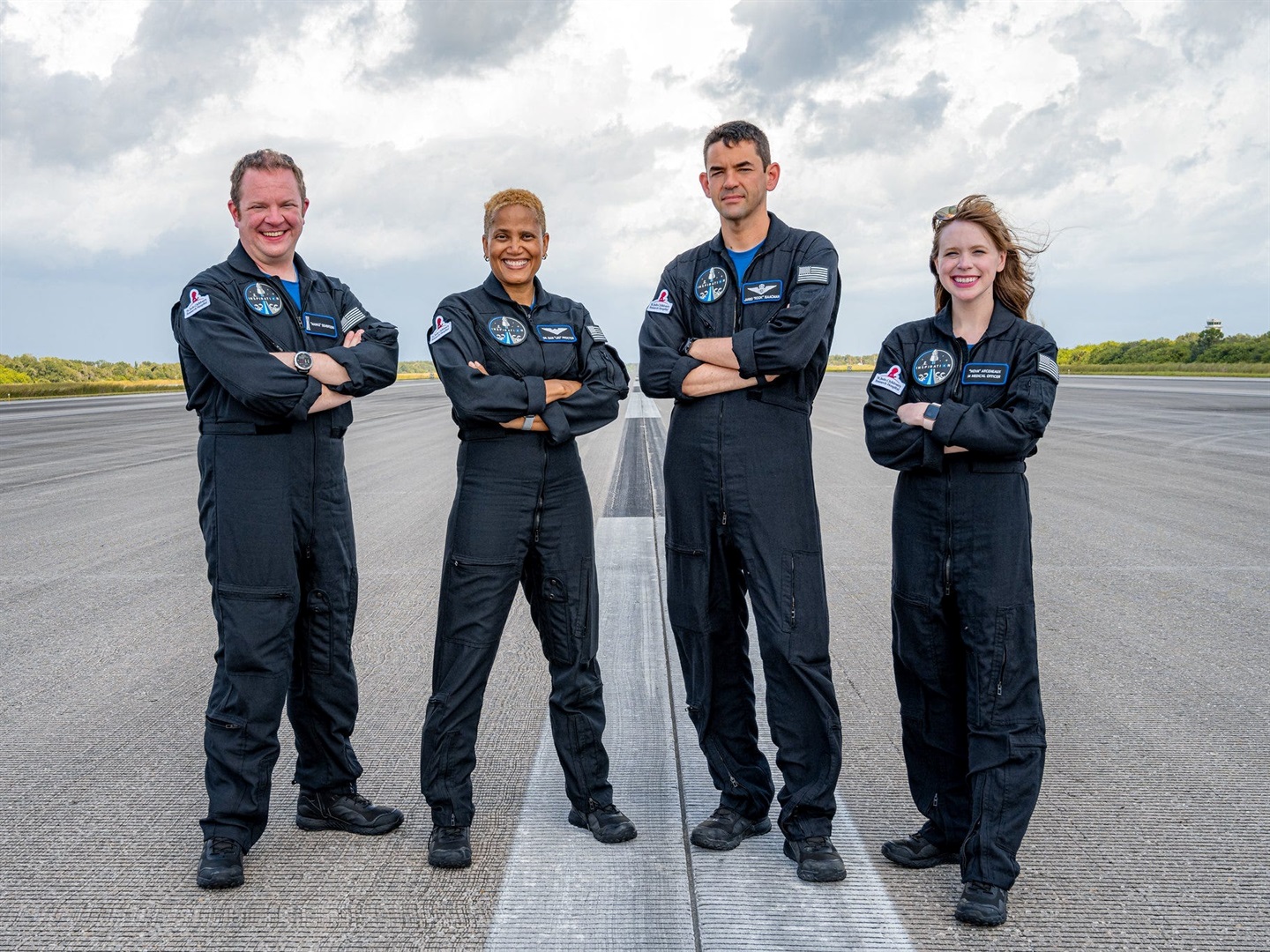 With their training is complete, Isaacman, Proctor, Arceneaux, and Sembroski flew to NASA's Kennedy Space Center in Florida on Thursday to complete the final preparations for launch.

They are SpaceX's first commercial passengers, but the company aims to fly more. It already has another such mission lined up in January: For that flight, called AX-1, the company Axiom Space chartered a Crew Dragon to take customers to the International Space Station for eight days.