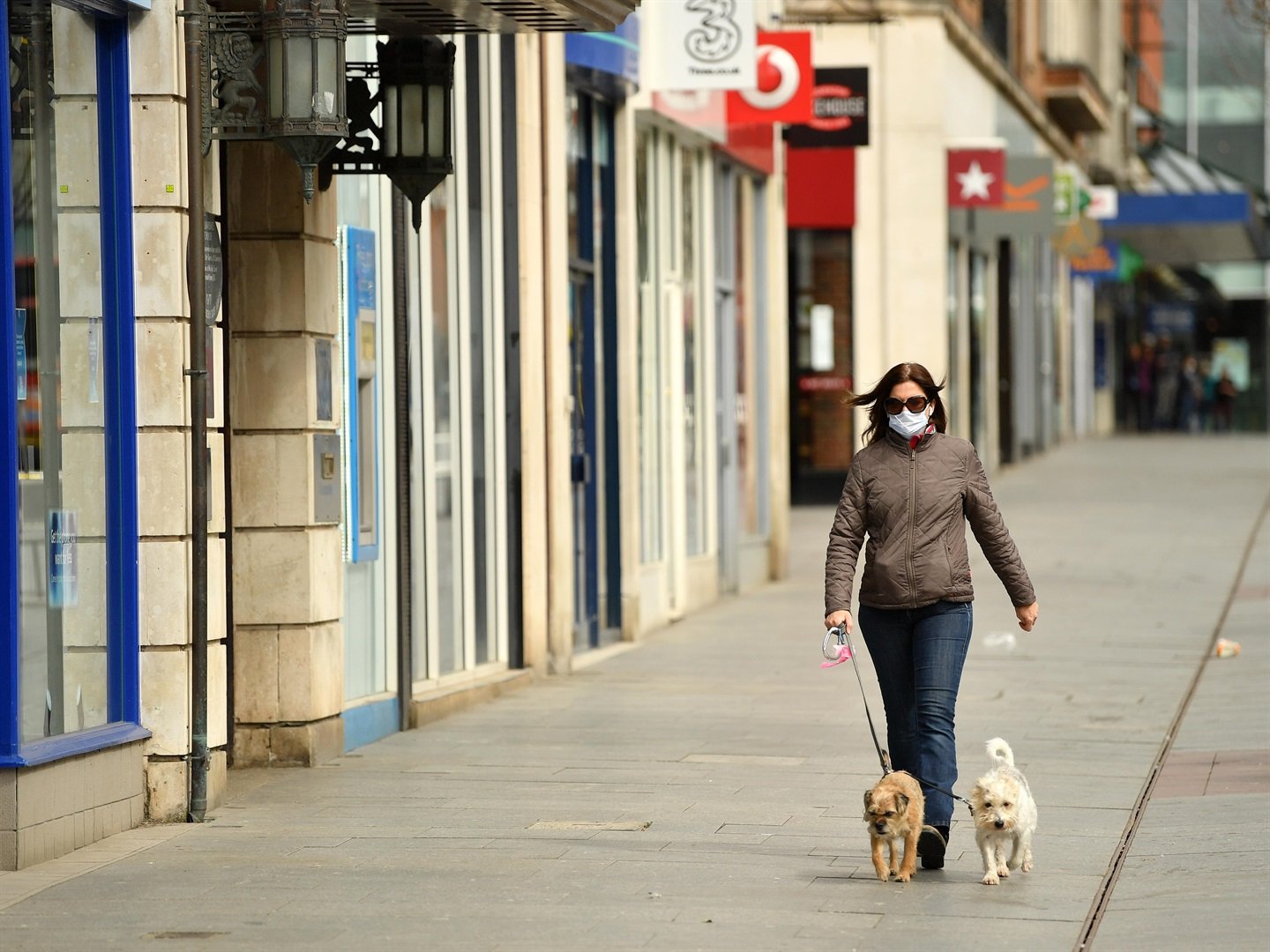 Even though shops in England can reopen on June 15, other parts of the UK like Scotland and Wales have yet to set a reopening date.
Dan Mullan/Getty Images

85 days have passed since t Britain's clothing, footwear, homeware stores, and coffee shops were made to close due to the Covid-19 lockdown. Nonessential shops that shut their doors back in March are able to reopen starting from June 15.

Shoppers will see major changes. Limits on the number of customers inside at any one time, already seen in essential groceries and supermarkets open during lockdown, will be introduced. Expect to see hand sanitisers at store entrances and throughout shop floors with signs reminding you to stay distant from other shoppers and workers. Toilets, seating areas, and in-store cafes will also remain closed.

Not all retailers will reopen at the same time. High street giant Primark told Business Insider that it will reopen its stores on June 15. John Lewis is taking a more cautioned approach, opening just two department stores on Monday, with eleven more opening on June 18.

John Lewis will introduce a new, upper contactless limit of £45 (R972) which means that customers cannot spend more than this amount without keying in their PIN number. Primark too will introduce an upper limit and has not ruled out accepting cash. Arcadia Group, which owns TopShop, Dorothy Perkins, and Miss Selfridges, told Business Insider that it has completely ruled out cash payments.

Perhaps the biggest challenge for fashion retailers will be the closure of changing rooms, shoppers' tendencies to touch items on shelves, and services that require close contact such as tailoring and fitting.

It could prove to be off-putting for shoppers who have previously enjoyed the browsing experience.

"You don't know if something is right for you until you try it on, so what's the point in traveling into central London or a high street elsewhere when I can just order online and return an item safely?" said Kathryn Peters, who was a frequent commuter into London's West End before lockdown.

Edward Hill, a 70-year-old retired chef, has been isolated indoors at home for three months and said he's "chomping at the bit" to go out shopping "for an adventure."

"I probably won't browse like I usually do, but I know what I'll get beforehand to limit the time I spend in stores. I'm also a bit fearful of handling clothes that have been touched by others, so I'm hoping shoppers only grab what they need," he said.

For others, nearby supermarkets have replaced the habitual drive into town for clothes.

"Because supermarkets have clothing sections, if I needed anything for my daughter I'd just go there. It's not like I've not been able to shop because clothes stores have been closed," Elizabeth Baker from South London told Business Insider.

"That will definitely weigh heavily on the way to recovery," he said.

Springham says Monday's grand reopening won't be a "big independence day," but instead be drawn out over several weeks. The UK's devolved political system means the June 15 reopening ruling only applies to England. Northern Ireland's stores already reopened on June 8, while Scotland and Wales have yet to receive guidance on reopening nonessential stores to the public.

Helen Dickinson, CEO of the British Retail Consortium representing 70% of the UK's retail industry, says the issue of changing rooms is "big" and that "guidelines have been over the place."

"Government guidance is stronger than ours in recommending that they are closed in the first instance. It really depends on the type of space a business has. The importance of social distancing has to be the overriding measure," she said.

When children are your clientele, social distancing could be even trickier. Kirsty Cunningham and Arancha Heredero run Windmills, an independent children's shoe store in Crouch End, North London, and both say they will almost certainly find it tough sticking to the UK's 2 metre gap rule. It's a ruling that has come increasingly under fire from UK ministers, with only Britain, Spain, and Canada implementing a 2 meter gap.

"Because we measure feet and fit shoes, we can't do that (distancing)," said Cunningham. "The children have their feet on our legs and knees all the time!"

"We have transparent shields instead of face masks, because it's threatening to children if they can't see our smile," said Heredero.

"We have a private fashion lounge and work with personal stylists who can take one to one appointments to allow customers to try on clothes in a bespoke space in line with all guidelines," Westfield told Business Insider.

There will also be a drive to interactive communication with customers as they wait in queues, "more integration of in store click and collect experiences" and "much more mixing of digital and physical" that could include QR codes and apps.

"It can generate better business, better loyalty and better customer connection," she said.

Retail workers who are set to return from months of furlough have expressed both anguish and excitement.

None more so than Carol Dorgu. She's worked in the patisserie and food department at the world famous luxury department store Harrods, a stone's throw away from London's royal palaces, for 22 years. She says Harrods has done its best to protect staff and helped trained staff in new hygiene protocols for two weeks before the scheduled reopening.

"I didn't want to come back early in May, as I had concerns about the death toll going higher. In the patisserie section, there's no space for staff to distance."

"They (Harrods) put your fear in consideration and won't force you to return," she said.

Dorgu added that Harrods has advised its staff to bring their own packed lunch and to go out of the store during their break.

Precautions have also been taken by stationery shop Paperchase, who will have screens up to divide customers from staff at tills just like many other retailers. Having been furloughed since March, Amy is more worried about receiving "abuse" from irate customers queuing up than she is about distancing when she returns to the shop floor.

"Customers are rude enough on a normal day so add a pandemic into the mix and it'll just make them worse. We saw a small glimpse of it just before we shut with people being rude and not obeying the rules we had in place, coughing near us and refusing to pay by card," she said. "I imagine the stricter the rules, the worse they will be."

Will shops recover from lockdown?

In the immediate term, Dorgu worries about the lack of tourists coming over from China and the Middle East and the impact that will have on Harrods, a traditional hotspot for those wanting to cash in on luxury brands. Britain has slapped a 14-day quarantine for visitors that could deter potential short-stay tourists.

But Dorgu remains optimistic about the store's future, "People might still want to see it and go 'Oh, I wonder what Harrods has done on their shopping experience.'"

Overall, reduced footfall and consumers keeping their hands in their pockets might be the new norm.The double whammy of extra costs and lower sales will hit the retail industry hard. It's not a business model for the future, says Dickinson, adding "We will certainly have less physical shops in the future. We were on that trajectory before the pandemic. It'll just accelerate that change."

Stephen Springham thinks bricks and mortar stores will remain, but the likes of London's Oxford Street "won't be top of the priority list" for both retailers looking to open and for customers looking to shop. "Retail is a £260 billion (R5 billion) market. Physical stores have a dominant cut of that and they'll still be there. It's not going to disappear, but it'll be painful," he said.

What is certain is that many people have a greater appreciation of retailers on their doorstep.

"By and large, people will show a greater willingness to shop locally," Springham said."We don't know this for sure, but local retail might emerge stronger."