Dwayne "The Rock" Johnson at the 2017 Oscars.
Matt Winkelmeyer/Getty Images

Dwayne "The Rock" Johnson is one of the highest-paid actors in Hollywood. According to Forbes, the former WWE made $124 million (R1.7 billion) in 2018, doubling his 2017 earnings. Back then, he beat out the likes of Robert Downey Jr. and his "Fast and Furious" costar Vin Diesel in the ranking.

One of the hardest working people in show business, Johnson stars in movies like "Moana" and "San Andreas," and on TV shows like HBO's "Ballers." He also endorses products and runs his own production company where he creates starring vehicles for himself, like "Rampage," "Baywatch," "Skyscraper," and "Jumanji: Welcome to the Jungle."

With custom cars and extensive charity work, the actor knows how to enjoy himself and spend his hard-earned cash. Here's how The Rock spends his millions.

Ian Phillips contributed to a previous version of this article.

In 2017, Forbes named Johnson one of the world's highest-paid actors. He started off as a wrestler. Johnson earned his nickname "The Rock" with his illustrious wrestling career, between 1996 and 2004. As a wrestler, he was one of the top box office draws in history.

But even then, it was clear he was a star whose charisma exceeded the constraints of the ring. He picked up a few TV and movie roles here and there, and starred in big-budget movies like "The Mummy Returns" and "The Scorpion King" in the early 2000s, as his wrestling career wound down.

His second act as an actor proved his most lucrative. Johnson commands huge paydays for action movies like the "Fast and Furious" series, "San Andreas," "Rampage," "Moana," "Baywatch," "Jumanji: Welcome to the Jungle," and the upcoming Disney movie "Jungle Cruise." He also stars in HBO's "Ballers" - the fifth season is now in production.

Since he joined the "Fast and Furious" series with its fifth movie, he's become an essential part of the storyline. The next movie, titled "Hobbes and Shaw," puts his character front-and-center. They founded the studio in 2012, after their 2007 divorce. Through Seven Bucks, they've co-produced some of Johnson's biggest hits, like "Baywatch" and "Jumanji: Welcome to the Jungle," and have a hand in the upcoming projects "Jungle Cruise" and "Big Trouble in Little China," as well as DC's "Shazam!"

He named his production company Seven Bucks for a reason: After flying from Canada to Miami after his short-lived football career ended, he emptied his pockets and found just $7 (R100).

In early 2016, The Rock teamed up with Under Armour for a global sponsorship. Under Armour's fitness clothing brand is a perfect match for The Rock, whose muscles have muscles. The move makes sense: He's enormously popular on Instagram, where he has more than 140 million followers.

So how does he spend all that money, anyway? One way is through charity. In 2006, Johnson founded the Dwayne Johnson Rock Foundation, a charity which works with children with illnesses, disorders, and disabilities to improve their self esteem and help empower their lives. It also helps with physical fitness and nutrition programs for children.

He also spends money on food. The 46-year-old has a demanding and particular diet. To maintain his physique, he eats more than 5,000 carbs a day, sometimes across up to seven meals. He'll have massive "carb up" nights where he just loads up on sushi. All in all, he eats about 4 kg of food a day. He often shares photos of his pancake stacks on Instagram and talks about his recipe all the time. But in early 2016, Johnson told Business Insider's Dave Mosher that he cut cod out of his diet.

When he's not eating or in the gym, the man loves to wear a suit. On the red carpet, he's known for his daring colors and fabrics. At the 2016 Golden Globes, he wore a wine-colored velvet tuxedo. At the 2016 Oscars, he wore a deep blue one with charcoal accents. And with Johnson's proportions, we're betting they're all custom made.

He's got a wide collection that comes in an array of colors. In January 2018, he wore a crushed-velvet suit to the Golden Globes.

Seriously, look at these suits. He may not match up to John Cena's 55 suits, but the man knows how to dress. GQ frequently points to Johnson as one of the best-dressed men in show business. He's not afraid to play with unusual fabrics and color combinations.

He also buys custom cars. The Rock showed up to the premiere of "Ballers" in a Pagani Huayra. This car is custom made, so the price can vary, but the regular Pagani clocks in at around $1 million (R14 million). But even though it's custom-made, Johnson said on Instagram that he's too big to properly fit in it.

The same type of car can also be spotted in his HBO show. In one season of "Ballers," Johnson appears to have the same kind of million-dollar car.

But his favorite car seems to be a custom-made pickup truck. Car blogs have identified several expensive cars in Johnson's garage, but his favorite seems to be a monster truck-like Ford F-150 Pickup, with custom modifications. It's a vehicle he can easily get in and out of with his six-foot, five-inch frame. It's fitting that the "Fast and Furious" star loves such an aggressive-looking car.

He also bought his dad a bunch of trucks. In 2016, Johnson wrote an Instagram post talking about his father's difficult life, and how he never asked for much.

"Over the years, I've moved him into a big home, got him trucks to drive - which he'll literally drive into the ground until I get him something else," Johnson wrote. "Hell, I'll get him anything he wants, but the SOB just won't ask."

It seems like he likes to gift people trucks in general. In July, he bought his stunt double (who's also a distant cousin) a giant custom pick-up truck.

"Over the course of my career, my stunt double (and cousin) Tanoai Reed has broken multiple bones, severed tendons, torn ligaments & just been an overall dominating bad ass achieving several 'Stuntman of the Year' honors," he wrote in an Instagram post. "I had this custom pick up truck delivered just in time to surprise him (he's still recovering from a stunt injury) while we give what he thought was going to be an interview about our careers together." 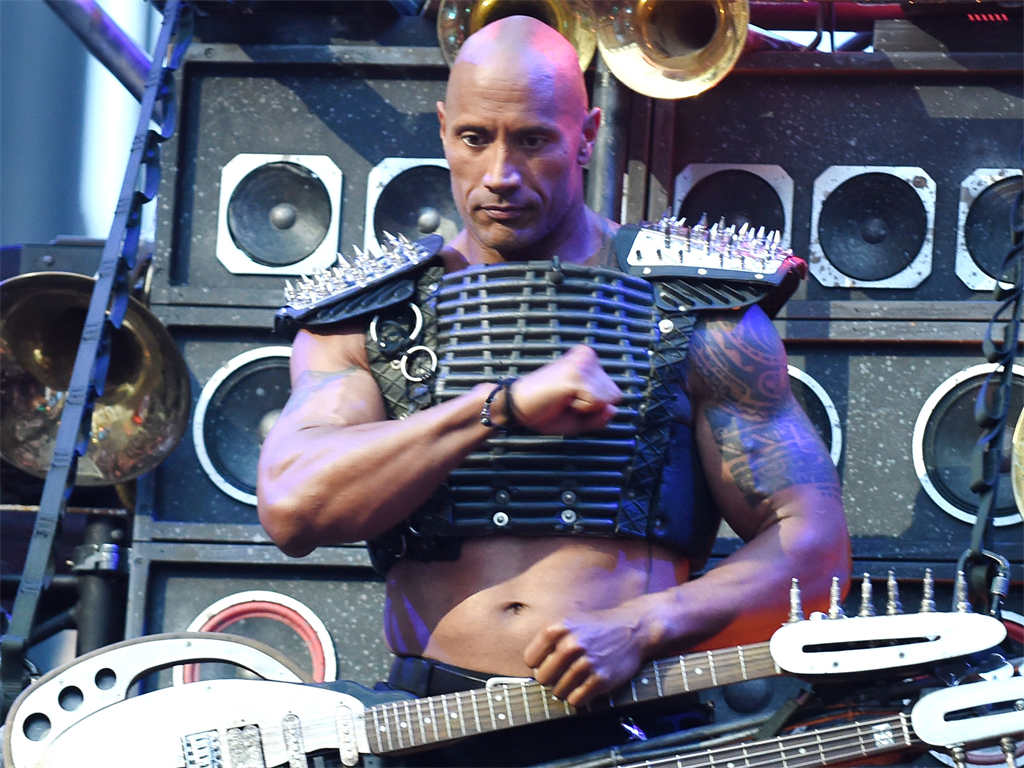 His chest and arm tattoos represent different parts of his heritage, which is part American, part Black Canadian, and part Samoan. He's gotten some of his tattoos done by a famed Tahitian tattoo artist named Po'oino Yrondi, according to Inked magazine.

Johnson is almost always working in different locations — and he often has luxury accommodations. He also often gets from place to place in a fancy Gulfstream G650. It's one of the best and fastest private jets in the world. It's unclear if Johnson owns it or just rents it, but he often posts on Instagram and Twitter about traveling in it while he's on press tours - and sometimes he brings his family along for the ride.

As a kid, Johnson always dreamed of owning a Rolex. It was smashed in the ring a week after be bought it, and he never replaced it.

But Johnson did buy at least one more Rolex as a gift. After accidentally punching another actor on the set of 2002's "The Scorpion King," he purchased a custom-made Rolex for him.

The Rock is also into the real-estate game. According to data from Zillow, Johnson is a relatively high-volume home buyer and seller for a celebrity. In the past decade or so, he's sold more than 10 homes, mostly in Florida.

Among them is a six-bedroom home in Hidden Hills, California, which he sold for nearly $4.9 million (R70 million) in 2012. According to TMZ, it had an infinity pool and a home theater. The addition included - no surprise - a giant gym and a guest house for his personal trainer.

Johnson also owns a farm outside of Charlottesville, Virginia. He goes there after grueling shoots to relax and reconnect with nature. He often posts photos on Instagram of himself, fishing in his pond, hanging out with horses, and frolicking with his family in the grass. Locals sometimes see him in Gold's Gym in Charlottesville.

With high-profile movies on the horizon like a "Jungle Cruise" movie, a "Big Trouble in Little China" remake, and "San Andreas 2," it looks like The Rock will have plenty of more spending money for years to come. The Rock is one of the movie world's biggest stars, and he's only getting bigger.