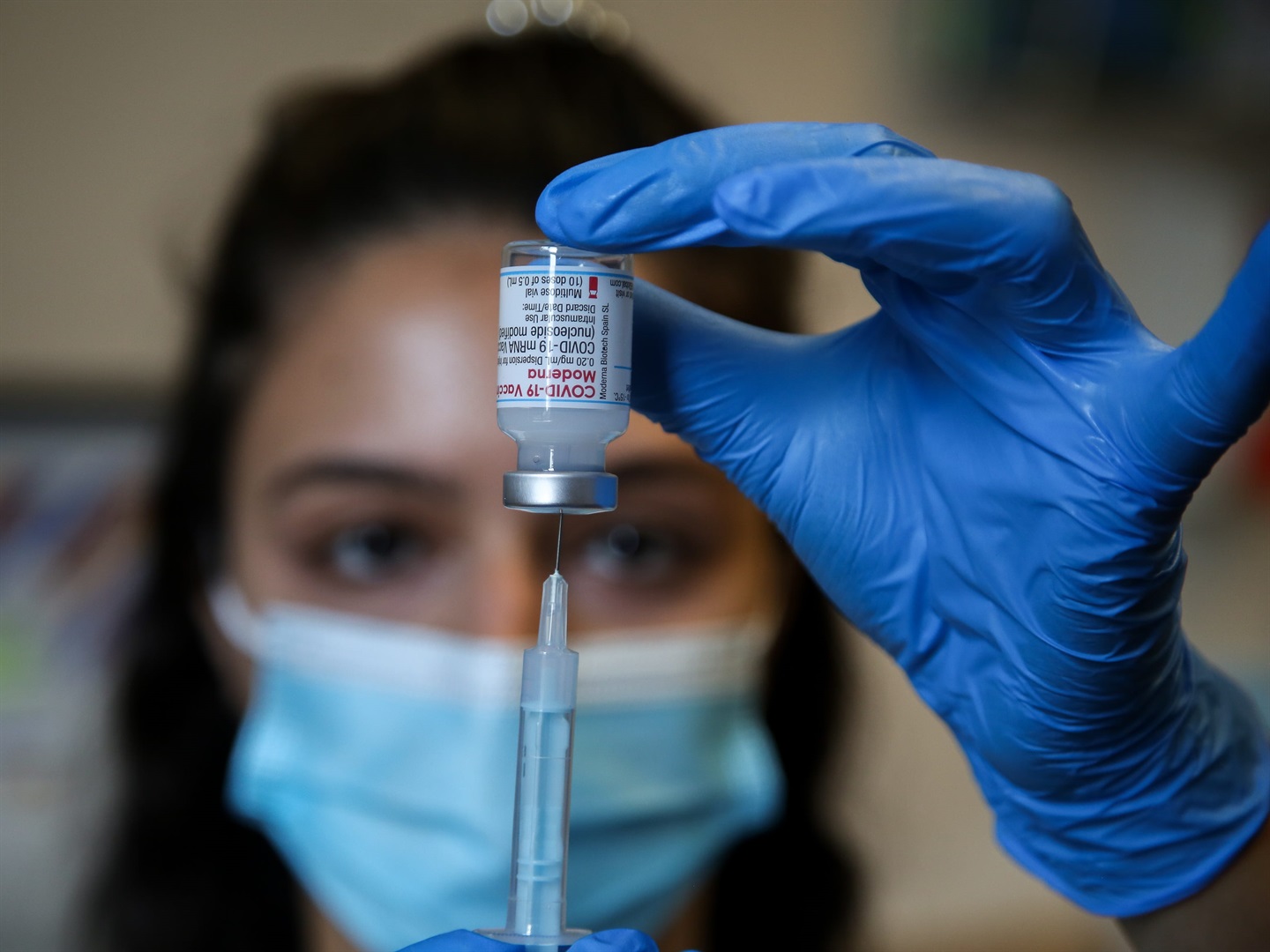 A NHS vaccinator prepares to administer the Moderna Covid-19 vaccine to a member of public at a vaccination centre in London.
Dinendra Haria/SOPA Images/LightRocket via Getty I

A Friday meeting in Washington got a little messy: An expert panel said the Food and Drug Administration (FDA) shouldn't green-light Pfizer's Covid-19 booster shot for the general public - but not without some dissent.

Pfizer executive Dr. William Gruber argued that without booster shots the US could face a wave of infections among the vaccinated. But committee members questioned whether it was too soon to tell if boosters offer any more protection to healthy Americans who've already received two doses. Members voted 16 to 3 against recommending Pfizer boosters for people ages 16 and up - but unanimously recommended the shots for adults ages 65 and up or those at high risk of severe disease.

Their debate hinged on a key question: When do the first two shots stop offering enough protection?

This week, Pfizer published its most robust data yet about how long its vaccine protection lasts, with results from at least eight studies. The data showed that the vaccine's effectiveness fell significantly over time - to 47% efficacy after five months, down from 88% in the month following dose two.

Though Friday's meeting didn't evaluate Moderna's booster, the company released data in a press release on Wednesday that also makes a case for boosters.

Both datasets give a look under the hood at how each company is measuring the duration of vaccine protection. Pfizer and Moderna have been tracking participants from their clinical trials, who are divided into two groups: Those who got vaccines as part of the trials (which began in 2020) and those who got a placebo, then the real vaccine once it was authorized. The vaccine's protection against infection fell from 88% in the month following the second dose to 47% five months after that second shot, according to a study from Kaiser Permanente. And real-world data from Israel suggests that the risk of breakthrough infections is significantly higher for people who were vaccinated with Pfizer earlier in the pandemic than for those who received vaccines later.

The Delta variant may pose a particular challenge. Pfizer's protection against breakthrough infections fell to 53% four months after it was administered, based on data collected from June to July, when Delta was becoming more prevalent in the US. The company thinks these results are due to waning protection, though - not the variant's ability to evade vaccines.

Moderna's data showed a smaller dropoff in efficacy against Delta infections. Another Kaiser Permanente study that's still awaiting peer review found that Moderna's vaccine was 87% effective in preventing Covid-19 infections after three months - down from 94% prior to the rise of Delta.

Is it time for boosters yet? Before the FDA advisory panel made its decision on Friday, the Biden administration had already announced a booster shot campaign for those who'd gotten Pfizer or Moderna. The administration pinpointed September 20 as the date on which most Americans would be eligible for third shots. (The FDA has already authorized boosters for immunocompromised people.)

Dr. William Schaffner, a professor of infectious diseases at Vanderbilt University, questioned whether the White House got ahead of itself.

"This is the sort of internal, behind-closed-doors argument - inside baseball - that goes on in science being translated into public policy all the time," Schaffner said. "The reason it's out in the open is because the White House made that pronouncement."

Protection wanes over times for all vaccinations, he said, and Covid-19 shots were not designed to prevent mild infections, but rather to prevent hospitalization and death - which they do very well after six or eight months.

"Will we need a booster someday?" Schaffner asked. "Sure. Do we need it today? No!"

Schaffner doesn't begrudge the scientists at Pfizer and Moderna for pushing boosters, though.

"I don't think this comes out of marketing division of the company," he said. "I think the scientists really believe it."

But he noted that many other concerns are at play. For one, two departing FDA regulators, as well as the World Health Organisation, have cautioned against offering third shots to the general population while much of the world remains unvaccinated, and without compelling evidence showing the need for extra shots.

Schaffner doesn't think that global equity argument holds up. He noted that regulatory and distribution challenges would make it difficult for the US's vaccine surplus to go directly to poorer countries with low vaccine access.

"It's a false notion that if you don't give the boosters, those doses will be delivered to Indonesia," he said, adding, "The problem is that we haven't gotten a first dose into people. That's where we ought to put our energy, time, and resources."