A speed hump costs at least R20,000 to construct – and there is very little governing how ferocious they're allowed to be 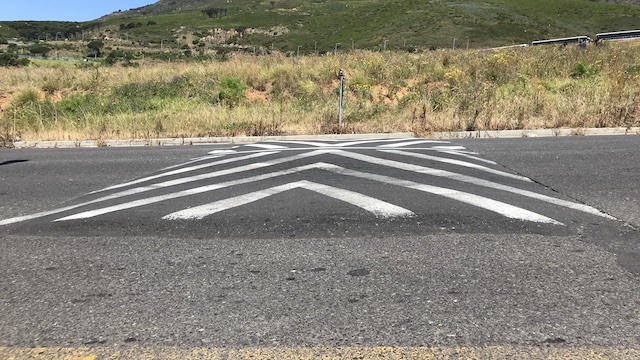 Speed bumps are the most effective way to slow traffic, but they can also be a significant annoyance particularly if you're unfortunate enough to own a low-slung Bugatti Veyron.

They can also be an unpredictable hazard – because there are little more than suggestions as to what their dimension should be, making for speed humps in South Africa that range from barely-there to basically-mountains.

According to the Council for Scientific and Industrial Research’s (CSIR) national guidelines on the matter, most requests for speed humps in South Africa are motivated by the need to restrict speeds on dangerous roads, or discourage people from rat-running through residential neighbourhoods to avoid traffic.

And provided they are constructed to the appropriate dimensions, the CSIR says that they are extremely effective.

But anyone who’s been caught off-guard by a particularly ferocious hump will attest to the fact that many are not, in fact, built to anything close to appropriate dimensions.

In South Africa there is no national law, or even enforceable guidelines, governing how intense your speed hump experience should be. And even where there are municipal blueprints for contractors to follow, they might be allowed to use their discretion and stray far from the recommended slope, height, and width.

It’s not just on the public roads, either; South Africa’s private housing estates have some of the most egregious examples of “traffic calming”.

Why South Africa has such a variety of of speed humps

Municipal requirements for speed humps vary from city to city, or even road to road, where contractors are allowed to exercise their discretion.

According to Dr Louis Roodt, a civil engineer at the University of Stellenbosch, this is where many of the hump installations go wrong.

“The problem lies in the municipalities that do not have expertise,” he says. “And they build these ‘sleeping policemen’ to their own dimensions.”

South Africa’s current speed bump guidelines also date back some 35 years, and have received little in the way of updates since then.

“The first research in South Africa was by Alister Jobson at the CSIR, around mid-1980s,” says Roodt. “This was based on the then Transport and Road Research Laboratory's guidelines of 100mm high, and 3.65 metres long, with a circular or sinusoidal profile.”

These guidelines have remained fairly consistent over the years, though there’s been an increase in flat-topped humps, the kind the usually have pedestrian crossings built into their summit.

The CSIR says most cities have done away with trying to build the more complex sinusoidal humps, and the flat-topped ones are often too expensive. As a result, traditional round-topped speed humps are still the most common way to calm traffic - and wreck sumps.

This is what speed bumps should actually look like...

The CSIR recommends that rounded speed bumps should be 3.7 metres long – or about twice as long as an adult – and between 80mm and 120mm high, depending on how much they are supposed to restrict speed.

The higher the hump, the greater the speed restriction. At 80mm high over a width of 4 metres, the CSIR says, cars shouldn’t be able to traverse a hump at more than 50km/h. Increase the height to 120mm, and the maximum speed drops to 30km/h.

Officially, each municipality has its own guidelines on how big humps should be. And on paper they don’t stray far from the recommendations.

The City of Johannesburg, for example, suggests that rounded speed humps should be 4 metres wide, and have a maximum height of 75mm.

In Durban, the Ethekwini Transport Authority also suggests that speed humps be 75mm high, over a distance of 3.8 metres. But the official document for Ethekwini allows for the traffic calming official to “from time to time, at his or her sole discretion, review and amend” these dimensions where necessary.

There are also important guidelines about safety. Humps must be clearly visible to motorists at day and night; the CSIR says humps should not be in the shade, and lighting is “essential”, as are municipally-mandated warning signs and reflective road markings.

In spite of these clear guidelines, examples of “vicious”, difficult-to-spot humps exist across the country.

One, in Hilton, KwaZulu Natal, went up in a single day, and was quickly scraped back down after community complaints that it didn’t follow recommended guidelines.

And in 2015, the KwaZulu-Natal MEC for transport agreed to pay 50% of damages suffered by a motorcyclist after an encounter with a hazardous unmarked hump.

Roodt says the majority of “horrific” speed humps are usually the result of road authorities or home owners’ associations trying to save money.

“They get a contractor in at the cheapest price without a formal design,” says Roodt, “Often with contractors claiming to have built hundreds of humps.”

This leads to problematic designs that can cause damage to vehicles.

“Often they are not even painted or warned of, and the visitors unfamiliar with the hump are surprised by a bone-shaking, teeth-clapping vertical acceleration,” he says.

Roodt says the worst examples on public and private roads are often due to residents’ pressure, rather than a true understanding of effective traffic calming measures.

Speed bumps cost at least R20,000 to install. Here's how to get one installed in your neighbourhood.

It’s not uncommon for people in South Africa to take traffic calming measures into their own hands - by digging trenches, or piling sand and other debris across the road - especially after fatal accidents.

But even official speed humps aren’t a silver bullet. They aren’t recommended for routes used regularly by emergency vehicles, busses and trucks, and can increase traffic noise, vibrations, and pollution.

And although they look simple enough to build, they’re surprisingly expensive if done correctly, owing to the amount of skilled labour required to install them to the guidelines.

Roodt, who now sits on the Stanford Ward Committee, says they budgeted R50,000 for a raised pedestrian crossing.

Smaller speed humps cost slightly less, though. The City of Cape Town’s Transport network and facilitation manager Sean Glass told Cape Talk in 2017 that a single hump costs between R20,000 to R25,000 to construct - with a turnaround time of around two days.

Because of the cost, potential drawbacks, and the fact that they’re not suitable for all types of roads, getting speed bumps installed on city roads - with city money - is a difficult process.

Most local governments require residents to submit comprehensive applications via their ward councillors for speed bumps to be installed in their area.

Here is how Johannesburg, Cape Town, and Durban decide where to put speed bumps.

"Due to the high demand for traffic calming, installation of traffic calming in the form of speed humps is undertaken by the Road Traffic Engineering Department on a strict priority basis," according to the Johannesburg Roads Agency,

Applications for traffic calming measures in Johannesburg must include letters of support from the ward councillor, the City of Johannesburg’s regional directors office, and Johannesburg Metro Police Department, along with drawings for the proposed location.

The City of Cape Town says it cannot keep up with the requests for traffic calming measures to be installed.

According to the city’s policy document on traffic calming, “The waiting list for implementation of projects now exceeds 500 with an estimated cost of R30million – a capital allocation that has not materialised.”

The city places an emphasis on traffic calming measures around schools and other high risk areas. Residents must first contact their ward councillors - who will work with them to submit an application to the relevant authorities, if he or she agrees with the notion.

The Ethekwini Transport Authority has issued a document that details the city’s approach to traffic calming measures.

Applications for speed humps and other traffic calming measures should go through local ward councillors, who will then forward the relevant documents to the Traffic Calming Official. This official will then conduct an assessment of the proposed location, and inform the councillor of the outcome.

Related Links
A new plan will increase a controversial vehicle-licensing ‘transaction fee’ by another 14% –...
This is South Africa's most congested city – where commuters lose up to 5 days a year in traffic
Durban just launched a R1.14 billion highway interchange – with 4 levels and Africa’s longest...
Next on Business Insider
A US groom contracted Covid-19, so the bride attended the wedding reception with a cardboard cutout of him