Ever Given, a Panama-flagged cargo ship, that is wedged across the Suez Canal and blocking traffic in the vital waterway is seen Saturday, March 27, 2021.
Photo by Samuel Mohsen/picture alliance via Getty

The grounding of the Ever Given is under investigation since the ship was finally dislodged on Monday after being grounded in the Suez Canal for six days.

The International Maritime Organisation (IMO) has received the ship's Voyage Data Recorder - the equivalent of a an airplane's black box - and launched its investigation Tuesday, Lloyd's List reported. The Suez Canal Authority (SCA) is also expected to start its own imminently, the outlet reported.

There will be no firm answers until both investigations have concluded. But during the tumultuous six days that authorities struggled to refloat the vessel, a confusing and occasionally contradictory series of explanations has been raised.

Several theories have been raised, and ultimately, the accident could be down to a mix of things at once. These are the main factors that have been suggested:

The Ever Given, marked by a circle, in the Great Bitter Lake on March 30, 2021.
MarineTraffic.com

Power cut on board?

When the Ever Given was first grounded on March 23, the shipping agent GAC Egypt published a post that was deleted the same day, which said: "The vessel suffered a black out while transiting in a northerly direction."

Later that day, the SCA announced that the ship had lost the ability to steer amid high winds and a dust storm, and made no mention of a power failure.

In a statement, the ship's technical manager Bernhard Schulte Shipmanagement (BSM) told Insider that "initial investigations rule out any mechanical or engine failure as a cause of the grounding," suggesting there had been no power cut.

It is worth considering that GAC Egypt has made other mistaken announcements about the Ever Given in the past, including saying last Wednesday that the vessel had been moved "alongside" the banks of the waterway, when it had not.

High winds and a sandstorm

Bad weather was an early explanation for the grounding, with BSM saying in a statement last Wednesday - a day after the ship got stuck - that it was "grounded due to strong winds."

The ship's leasing company, Evergreen Marine Corp, said the same day that the ship "was suspected of being hit by a sudden strong wind, causing the hull to deviate from (the) waterway and accidentally hit the bottom," Reuters reported.

Lt Gen. Osama Rabie, chair of the SCA, had also said last Tuesday there had been high winds that day.

Egypt is at the beginning of a season called the khamsin, a roughly 50-day period in which sporadic, powerful dust storms blow in from the Sahara. The khamsin typically starts in April, but has been known to begin in late March.

Andrew Kinsey, a former cargo-ship captain with experience in the Suez Canal, told Bloomberg that piloting a ship in the canal in windy conditions is a difficult task that gives ships a "white-knuckle" ride.

Others disagree. Sherine Naggar, the chair at Naggar Shipping Company, told Seatrade Maritime News that heavily-laden container ships pass through in high winds all the time without issues. "For this particular ship it must have been a technical error," Naggar said.

Rabie, the SCA chair, also seemed to sour on this narrative in an announcement a few days later, according to Alarabiya News.

"Strong winds and weather factors were not the main reasons for the ship's grounding," Rabie told assembled reporters on Saturday.

As well as putting a possible power cut back on the table, Rabie also raised a new possibility.

Passing the speed limit, and other human errors 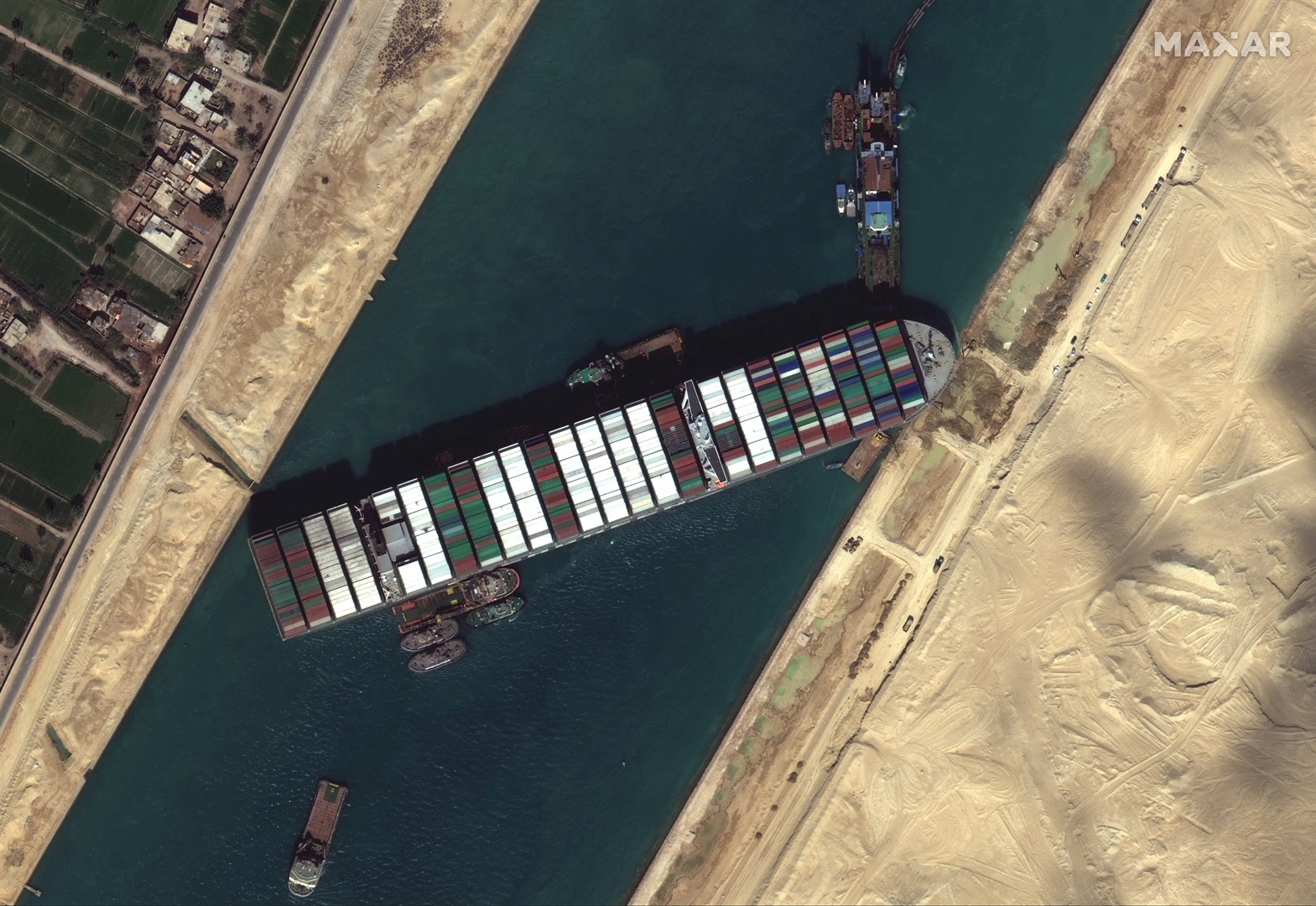 At the Saturday press conference, Rabie said: "there may have been technical or human errors." He did not elaborate further on what those might be.

But according to Bloomberg, the ship's last known speed before the grounding was 13.5 knots - much faster than the canal's speed limit of around 7.6 knots.

It can be a method of coping with high winds, one captain with experience of the canal told Bloomberg. "Speeding up to a certain point is effective," Chris Gillard told the outlet.

The ship directly behind the Ever Given - the Maersk Denver - was also above the maximum speed before the grounding, Bloomberg reported.

Ever Given was unescorted

Several ships had opted not to enter the canal in the rough weather conditions on March 23, the day the Ever Given went aground, Bloomberg reported.

Some of those that did were aided by tugboats, the outlet reported. According to the SCA's rules of navigation, this is available, but not mandatory unless the SCA says so, Bloomberg reported.

The Ever Given was one of the biggest vessels afloat at the time, and it is unclear whether escorting tugboats would have affected the ship's ability to navigate the canal.

The shipping world is watching closely

As of Tuesday, the vessel remains in the Great Bitter Lake off the Suez Canal while authorities try to figure out whether it is fit to sail and what to do with its cargo if not. The ship is currently carrying about 20,000 containers.

The outcome of the investigations - from the International Maritime Organisation, which launched Tuesday, and the Suez Canal Authority, which is set to start soon - will be watched closely by the shipping world.

As Lloyd's List reported, marine insurers are bracing for a massive influx of claims, in which the details of who or what was at fault are set to have immensely costly implications.