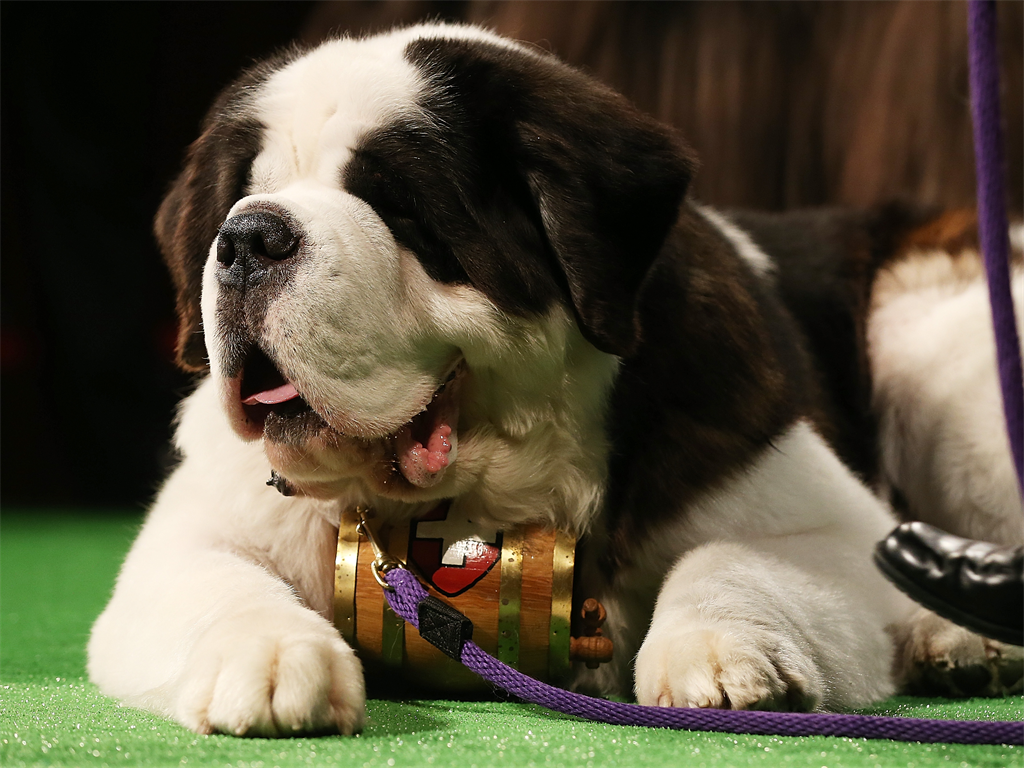 Apart from their given name, a dog's breed is undoubtedly what makes them unique. Everything from defining personality traits to their physical stature can be determined by a dog's specific breed.

Although the origins of most breed names are speculative and a bit ambiguous, many dog breed names could have fascinating and even heroic origins.

Here's how 18 popular dog breeds supposedly got their name:

Basset hounds likely got their name because they're low to the ground.

This scent dog's history seems to date back to sixth-century France. Many people believe this breed is descended from the St. Hubert hounds that used to be kept in monasteries.

In terms of name, the "basset" likely derives from the French word "bas," which translates to "low" in English, since the hound's known for having short legs, making it low to the ground.

Bulldogs might have ties to a violent form of entertainment.

Historians suggest that centuries ago, in Great Britain, bulldogs were trained and bred to fight bulls for bullbaiting, a form of entertainment in which dogs attacked bulls. Bullbaiting was later outlawed in Great Britain in 1835, but the breed still kept the name.

Beagles are supposedly named for their unique howl.

According to America's Pet Registry, these British scent hounds may get their name from multiple sources. One of the more common speculations is that the name stems from the French word "beugler," which roughly translates to "to bellow" in English, because the dogs are widely known for their frequent howling and their distinctive voice.

Dobermann Pinschers may have gotten their name from a tax professional.

Long before the days of e-filing, a man used to show up on people's doorsteps to collect their taxes from them. One of these men was said to be a guy named Louis Dobermann, who also bred dogs in his spare time.

The American Kennel Club suggests that he hoped to one day breed an authoritative companion that he could bring along to work, perhaps in the hopes that his taxpayers would be less resistant to his requests if he had a canine by his side.

This strong dog came to be known as the Dobermann Pinscher and its reputation as a working dog seems to have persisted seeing as they are commonly represented in K-9 police units around the world.

Bloodhounds might have an aristocratic meaning behind their name.

Centuries ago in Europe, the clergy supposedly kept hounds near the church and put monks in charge of caring for and breeding them. After several generations of purebred breeding, this strong, obedient dog came to be regarded as having "aristocratic blood," thus giving it its final, lasting name - the bloodhound.

There remains a long-standing debate over whether these elegant, well-coiffed pups came from France or Germany, but the word "poodle" likely derives from the German word "pudel." This word roughly translates to "one that plays with water" and, as you may expect, this word is found in the etymology of the English word "puddle."

Poodles were originally trained to be water retrievers (dogs that hunt in the water), which makes this name quite appropriate.

The spaniel is often regarded as one of the oldest, most recognizable dog breeds. Historians suggest this breed was originally trained to push animals out of hiding without scaring them off, making prey easy for their owners to hunt.

But the "cocker" in the name could specifically refer to the breed's ability to flush birds like woodcocks into the open so their owners could hunt them.

Corgis could be named after their stature.

This small canine's name is the Welsh word for "dwarf dog." This name could refer back to the dog's signature small, short-legged stature that historically allowed them to successfully herd cattle since they were short enough to mostly avoid getting injured by livestock.

Shih Tzus could be named after a totally different species.

The Chinese name "shih tzu" roughly translates "little lion" in English, because these dogs were supposedly bred to have aesthetic features similar to the ferocious king of the jungle.

The name might have to do with some Tibetan legends that suggest that Buddha Manjuri, God of Learning, could transform little dogs into actual, full-grown lions that could protect him on his journeys.

The Jack Russell Terrier may have been bred for specific reasons.

The Federation Cynological International suggests that Jack Russell Terriers were bred from fox terriers back in the 1800s. The breed's supposed namesake was Reverend John "Jack" Russell, who apparently was such a fox-terrier lover that he decided he wanted to breed a special terrier with shorter legs so it could hunt foxes in the hilly region where he lived.

Schnauzers are famous for their snouts.

The German word "schnauzer" translates to "snouter," or snout in English. Colloquially, it can also refer to mustaches.

These dogs were aptly given this name because one of their most distinctive features is their prominent jaw hair that resembles a human mustache.

With an average height of 76cm and an average weight of 63.5kg, these powerful pooches live up to their title, but they're probably not actually Danish.

It's likely these gentle giants actually originate from Germany, where they held many different names over their long history. Some of the earlier names of this breed may have included "German Mastiff" and "German Boarhound."

Great Dane Rescue suggests the label "Great Dane" came about when a famed French naturalist observed the dogs in Denmark and believed them to be a different, Danish version of the greyhound.

Pit bulls may have gotten their name from a violent form of entertainment.

Like bulldogs, these dogs were likely previously bred to partake in aggression. According to Encyclopedia Britannica, pit bulls were originally bred to be aggressive so they could take part in the now mostly illegal practice of dog fighting.

This complicated history is believed to be one of the reasons why the breed is infamously and often unfairly stereotyped as always being overly aggressive.

Pointers can be identified by their behavior.

Not to be confused with other hunting breeds, pointers are a group of sport dogs named for their tendency to point at things. When these dogs first became popular in the 1600s, their pointing skills supposedly assisted their owners with finding the huntable game in areas where it was difficult to see.

According to The Smithsonian website, the breed name for these big dogs stems from their record of rescuing monks and other travelers in the Alps during several harrowing blizzards throughout the 18th century. St. Bernard Pass is the name of a large stretch that people crossed to get between Switzerland and Italy but sometimes would get lost in.

Supposedly, in the 18th century, the monks at St. Bernard hospice kept these dogs as companions but they later discovered the dog's useful ability to find people who were stuck in the snow and help keep them warm during a rescue.

Of course, those who lived back then didn't call these pups Saint Bernards. They technically didn't have an official name for hundreds of years until some started calling them Barry Dogs as a tribute to one legendary St. Bernard who supposedly saved more than 40 humans in his lifetime.

In 1880, the Swiss Kennel Club finally settled on the official name we know today.

Pugs could have ties to a sweet term of endearment.

The etymology of the word "pug" is actually pretty sweet. In the 1560s, it was used as a term of endearment alongside "puggy." In the past, "pug" has also been defined to mean "sprite," which could be a nod to Puck, a mischievous fairy of Shakespeare's creation.

Although there's no definitive tale for how this word came to be the name of this tiny breed, the American Kennel Club officially recognized the breed with this title in 1885.

German shepherds may have been bred to herd sheep.

This canine is likely named for its long history of assisting - you guessed it - shepherds. Their duty was to guard and herd sheep.

But the popular German breed was supposedly named in 1899 by Berlin veterinarian college student Max von Stephanitz, whose goal was to standardize shepherd dogs in the country. To this day, some farmers still use the dogs for herding purposes.

Now, this breed does more than just herd sheep. They're commonly trained for military and police forces because of their obedient, hardworking nature.

Dachshunds' name has nothing to do with hot dogs.

Dachshunds are hound-terrier mixes that were originally bred to chase badgers more than 600 years ago. So it makes sense that the German "dach" translates to "badger" while "hund" translates to "dog."