How David and Victoria Beckham make and spend their billions Victoria and David Beckham have been dominating pop culture as Britain's "It" couple since they first got together in 1997.

Victoria - a former Spice Girl who built a fashion empire - has reportedly made a whopping $450 million in her career. Her husband has raked in a similarly astronomical amount of cash thanks to his incredibly successful soccer career and his endorsement deals across a spectrum of companies.

Check out how the Beckhams make and spend their millions below.

And more than two decades later, the Beckham family — which includes, David, Victoria, and their four children — is the closest thing to British royalty outside of the actual royal family. Together, Victoria and David Beckham are worth a whopping $900 million (R13 billion) — upwards of $300 million more than the Queen herself. David made a huge portion of his millions through his extremely successful and lucrative soccer career.

He signed for Manchester United as a trainee during the summer of 1991, when he was just 16 years old. Beckham then signed as a professional less than two years later and stayed with Manchester United for more than a decade, scoring 85 goals in 394 league appearances with the club. The midfielder left Old Trafford and signed a four-year, $41 million deal to join Spanish giant Real Madrid over the summer of 2003. Beckham agreed to a five-year deal with the LA Galaxy of the MLS for what was widely reported to be for $250 million in January 2007.

Forbes estimated he made a whopping $255 million between salary, revenue sharing, endorsements, appearances, and licensing over his six years in the MLS. The massive sum includes his endorsement deals with Samsung, Adidas, Pepsi, H&M, and more. He also has his own brand of whiskey. After his time with the LA Galaxy came to an end, Beckham signed a five-month deal with Paris St-Germain and immediately committed to donating his entire salary to a children's charity.

He retired from soccer at the end of the season and received a standing ovation from PSG fans after notching an assist in the final match of his career.

He is now a majority owner of Inter Miami, an MLS expansion franchise slated to begin playing in the league by 2020. Though he bounced between multiple clubs throughout his career, Beckham is arguably most famous for his six years as captain of the English national football team.

His wife, meanwhile, has been one of the most famous and influential people in Britain ever since rising to fame as a young woman. In the mid 1990s, Victoria enrolled at Laine Theatre Arts College in Epsom, where she studied dance and modeling. It was there where she stumbled upon an ad in The Stage calling for auditions to join a girl group. She was selected to join what later became known as "The Spice Girls" alongside Emma Bunton, Melanie Brown, Melanie Chisholm, and Geri Halliwell.

The group enjoyed lucrative endorsement deals while profiting off of their likeness with Spice Girl dolls, perfumes, and other merchandise. Victoria — who rose to fame as "Posh Spice" — reportedly made $75 million annually as a member of the mega-popular girl group. Though she won't be joining Sporty, Ginger, Scary, and Baby on their 2019 reunion tour, Beckham stands to make a considerable amount of money due to her "significant stake in the group’s image and music rights," according to The Sun.

Victoria began to move away from music entirely in the early 2000s. She made her fashion debut at London Fashion Week as a model for designer Maria Grachvogel at the turn of the century and was named Dolce & Gabbana's British ambassador just three years later.

Her fashion career exploded in 2008 after she was the face of Marc Jacobs' spring/summer collection and guest judged on Project Runway. By 2011, she beat out the likes of Stella McCartney and Tom Ford for Designer Brand of the Year at the British Fashion Awards.

When she won the Glamour Woman of the Year Award in 2015 — her second time receiving the award — she didn't forget to credit where she came from: "It started with the Spice Girls and girl power," Beckham said in her acceptance speech. "I want to make a woman feel like the best version of herself."

Still, Victoria has earned a considerable amount of cash thanks to her perch atop the fashion world. As of 2017, her fashion business was valued at $133.4 million.

Between Beckham's fashion brand and her husband's image rights, the Beckhams took home $24.3 million between them in 2016 and 2017. That amounts to about $500,000 a month each over the two year period.

But despite their extraordinary wealth and extravagant lifestyle, the Beckhams often take time to give back.

Victoria is a UNAIDS International Goodwill Ambassador, while her husband has been a UNICEF goodwill ambassador for more than 10 years. And for her work with the UN and Save the Children, Victoria was granted an Officer of the Order of the British Empire (OBE) by Prince William in 2017. The Beckhams also have several homes. At one point, they lived in Rowneybury House, a giant mansion located in Hertfordshire dubbed "Beckingham Palace." They've since moved into a $45 million home in the West London neighborhood of Holland Park. And when they get tired of the city, they can head over to the Cotswolds and spend time in their country estate. Of course, the Beckhams always travel in style (and sometimes with Sir Elton John, apparently). 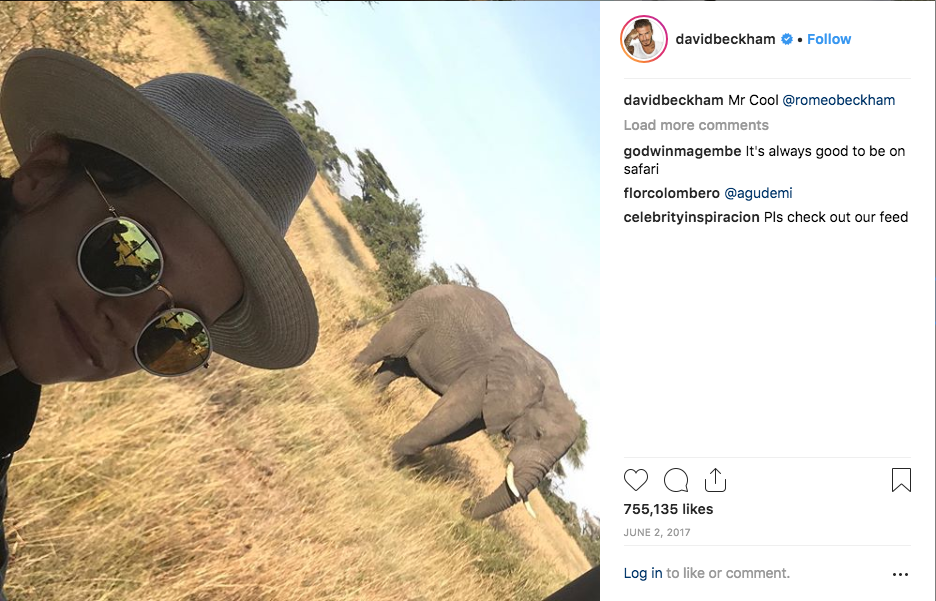 They took to the slopes at Whistler in early 2018.

But they traded in the snow gear for swimsuits later that year. Even despite their excessive wealth and luxurious lifestyle, the Beckhams aren't too proud to take a trip to Disneyland with their kids. And David totally embraced it. Despite all of their fame and fortune, Victoria and David Beckham clearly put their family first.