In April 1982, a British armada, including two aircraft carriers, sailed south to retake the Falkland Islands from Argentina. In response, the Argentine Air Force launched a fierce campaign to stop them.

The deadly combination of the Super Etendard aircraft and the Exocet anti-ship missile made Argentine pilots extremely dangerous. If they managed to sink either of the two British aircraft carriers, the British fleet would lose its air superiority and would have to retreat.

The British knew there were five Exocet missiles stored at Argentina's Rio Grande air base, 643 kilometres west of the Falklands in Tierra del Fuego, Argentina's southernmost province and one of the world's most remote regions.

British commanders turned to their special-operations forces and the Special Air Service (SAS) to deal with the threat. 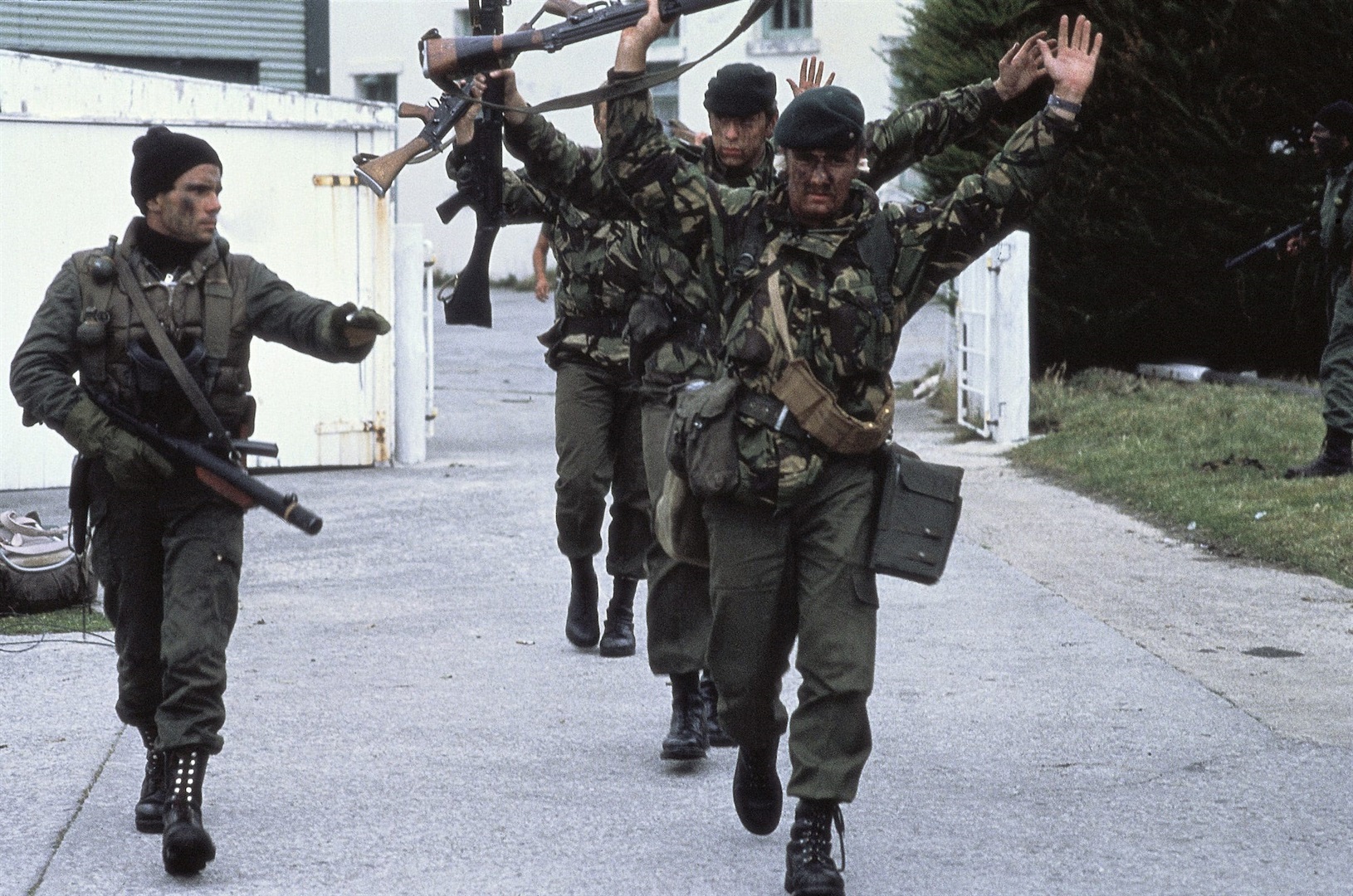 Argentine forces using air-launched Exocet missiles were able to sink several British ships as the fleet made its way south, which drove calls for action in London.

The SAS commander, Colonel Peter de la Billière - who later became a general and was the deputy commander of all coalition forces during the Gulf War - pressed for a commando raid to take out the Argentine aircraft.

The SAS had recently conducted a superb hostage rescue at the Iranian Embassy in London, which was filmed on live television, and were cashing in their political clout.

The SAS proposed Operation Mikado: a dashing raid on Rio Grande. Roughly 70 SAS operators from the unit's B Squadron would land at the base in two specially configured C-130 transport aircraft, deploy on motorcycles and gun trucks, and then storm the base's buildings and aircraft hangars.

After they had destroyed the Super Etendard aircraft, Exocet missiles, and any other targets of opportunity, they would, if possible, fly away in the C-130s or escape to neighbouring Chile, which was still on friendly terms with the British.

There were several issues with the plan.

Although the addition of internal fuel tanks meant the C-130s could reach the air base, it was highly unlikely that they would avoid detection by Argentine radar. The British pilots also hadn't had enough training with night-vision devices, making formation and low-altitude flying extremely dangerous. HMS Sheffield after being hit by an Argentine Exocet missile in the South Atlantic, May 10, 1982.

The SAS operators also had some pretty restrictive rules of engagement. They couldn't kill or wound the Argentine pilots, unless they were attacked, thus eliminating probably the most effective way of neutralising the Exocet threat.

Nor were the British commandos prepared for the harsh environment in which they would have to operate.

"The South Atlantic winter was a big surprise for us. Thus far, we had been operating primarily in jungles and deserts," a retired SAS officer who served in the Falklands said.

"We had some Arctic warfare training - the SBS had more, going back to their Royal Marine roots - but not to the point of us being comfortable in the environment. In the initial days, we suffered a lot, but eventually we received more protective gear, including Gore-Tex clothing" provided by the US Army's Delta Force, the retired officer added.

There were also doubts among the SAS troops about the viability of the operation. The commanding officer and sergeant major of B Squadron thought the plan too rash and were fired because of it.

By mid-May, the British still didn't have sufficient intelligence for a raid, so SAS leaders devised a strategic reconnaissance operation deep inside Argentina. Codenamed Operation Plum Duff, this mission would pave the way for the raid. An eight-man team from B Squadron's 6 Troop was chosen to infiltrate Argentina and reconnoiter the airfield.

They flew from SAS headquarters at Hereford in the UK to Ascension Island, a small island in the middle of the South Atlantic, and then parachuted near a Royal Navy aircraft carrier in South Atlantic.

After a quick rest and final brief, the SAS troopers boarded a specially configured Sea King helicopter, which would fly them to mainland Argentina on a very low-altitude, nap-of-the-earth route.

However, heavy fog forced the chopper to ascend once close to Argentina's coast, allowing an Argentine destroyer to pick it up with its radar. Unbeknown to the SAS team, they had already been compromised.

As they neared land, the SAS captain got into an argument with the Sea King pilot, insisting the team be inserted in the alternative infiltration point, which was farther from the airbase. The crew of a British SAS helicopter that crashed on a Chilean beach during the Falklands War in 1982.
John Downing/Getty Images

Once on the ground, the SAS operators began a grueling march toward the airbase. The commandos, each carrying about 120 pounds of gear, had to hide during daytime and walk at night because of the need to maintain secrecy.

As they marched, Patagonia's rough terrain took a toll on the commandos. They were further slowed by a commando who got violently sick. It soon became clear to the freezing SAS troopers that they wouldn't reach their target before their rations ran out.

The SAS captain contacted headquarters and was ordered to abort and escape to Chile and meet with an SAS liaison there. But upon reaching the Chilean border, the patrol couldn't find their liaison. They had to improvise, seeking shelter and donning civilian clothes.

Finally, they made contact and, after some deliberations, were exfiltrated back to the UK.

The SAS troops involved faced "a horrible situation," the SAS officer in charge of the operation said afterward.

"There was such a huge weight of expectation for the mission to be successful, to be balanced against walking out of the helicopter into what may well have been an already compromised situation and perhaps even into an enemy position," the officer said.

Operation Plum Duff faced internal backlash, as its legality under the laws of armed conflict was dubious. Since the UK and Argentina hadn't officially declared war on each other, any British troops caught in Argentina weren't covered by the Geneva Conventions and could be tried for espionage and executed.

Mikado was eventually canceled because the Argentines fired all the Exocets stored at Rio Grande at the British fleet - with great effect, sinking a destroyer and a merchant marine ship - and because of sketchy intelligence about the base.

The British recaptured the Falklands when the remaining Argentines there surrendered on June 14, 1982. The 10-week conflict was the last to involve large air, land, and naval battles, and it was a bloody campaign: Nearly 1,000 British troops were killed or wounded, and Argentina suffered more than 2,200 casualties.