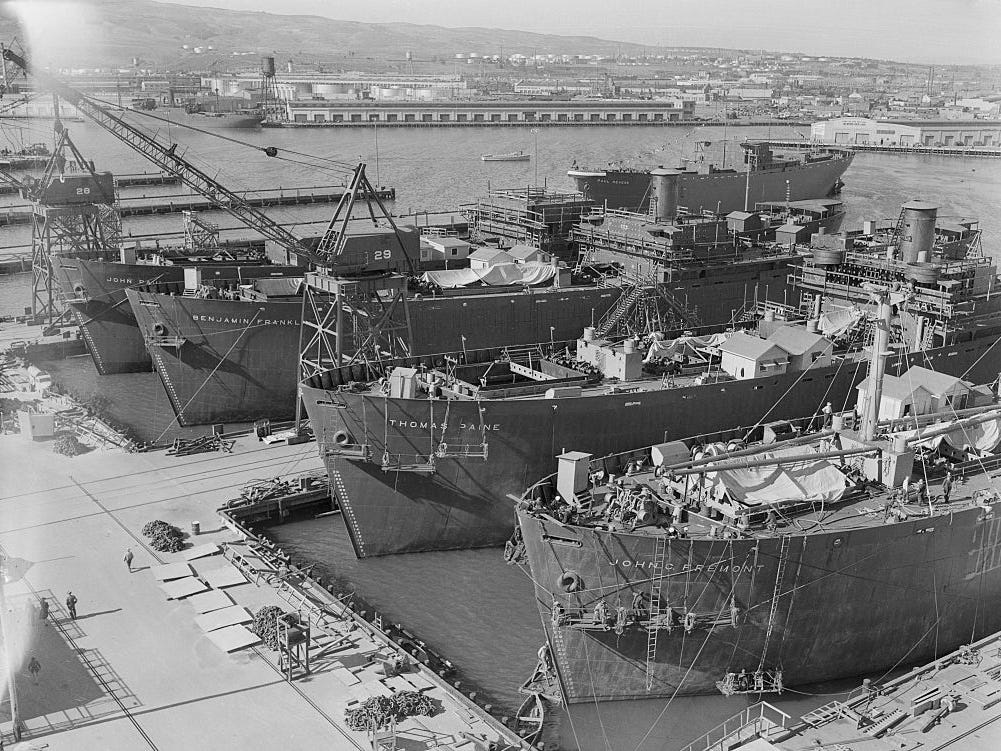 At the time ocean shipping took over the world, America gave up on the shipping industry.

In 1960, when the world moved 1.2 million tons of goods via ship, the American fleet comprised 16% of the world's total cargo shipping power. By 2019, global trade shot up to 10.7 million tons - but America's domestic carriers are moving just a sliver of it. The US Merchant Marine now makes up just 0.2% of the world's vessels.

Meanwhile, the US consumes the most goods moved by shipping container of any country - which is how lawn chairs, yoga mats, and basically everything else you buy moves from factories in Asia to stores in North America and Europe. (I'll be focusing on containerised shipping in this piece. The two other major types are bulk shipping, which moves raw goods like iron ore, and tankers, which moves oil.)

The shipping crisis has been the talk of 2021. Unprecedented trade volumes has sent freight prices to record highs, as I wrote about last week. And as fraught ocean supply chains hamper Americans' access to, say, life-saving electric generators or surgical masks, consumers are dependent on a trade network entirely out of their control.

Our shipping building empire of yore

Shipping is not as lucrative as you think. Ships have to be at least 90% full to turn a profit. Management consulting giant McKinsey slammed the industry in a 2014 report, calling it "highly unprofitable" and "exceptionally volatile."

It's always been like this. That's why, in the 20th century, major seafarers like the United Kingdom subsidised the building and operations of their cargo lines.

To understand how shipping has changed in the past 100 years, I chatted with two experts. One is maritime historian Salvatore Mercogliano, who was in the merchant marine before he entered academia. The other is John D. McCown, who has three decades of experience operating and investing in container shipping. He recently published a shipping history called "Giants of the Sea."

In the early 1900s, the United States was heavily dependent on the cargo fleets of Germany and the UK. But constant warring had those European ships otherwise engaged. So America began developing its own major ocean carriers.

In 1936, Congress established the US Maritime Commission. It was charged with building a fresh fleet of government-funded merchant ships - and was appropriated at least $1 billion (R14 billion) (in 2021 dollars) each year to do so. In the commission's annual reports, officials argued such a fleet was crucial to the country's national defense.

The commission planned to furnish 500 ships over the course of 10 years. Instead, it built a whopping 5,777 ships from late 1930s until 1950 - "more ships than were really needed," as McCown put it. Some were sold off to other countries or were destroyed in the war, but many became our very own cargo ships.

Many of the ships that comprised America's fleet of 2,926 came from that effort from the US Maritime Commission. They were intended to support America's wartime efforts. After the end of World War II, this massive fleet just started moving our regular ol' peacetime stuff.

Those ships would not be replaced with the same vigor that furnished them. The Maritime Commission was disbanded in 1950.

Commissioners wrote in an annual report in 1949 that they envisioned an American cargo fleet run by private enterprise that could mostly stand without government support. Mirroring its overall ascendance, the US was becoming a shipping superpower; an American businessman named Malcom McLean would even invent containerised shipping in 1954, arguably the largest advancement in ocean trade since humankind invented the boat.

But these bureaucrats knew that it was unusually expensive to build or operate ships in the US. A couple canoodles near the Port of Los Angeles circa 2004. I wonder if they were thinking about the curtailing of federal subsidies to US shipbuilders and operators...
Robert Nickelsberg/Getty Images

It wasn't enough to maintain the fleet that Americans built during WW II. From 1960 to 1980, our domestic cargo fleet shrank by 2,062, from 2,926 to 864, according to the Department of Transportation.

America's new role as a minor character in shipping was sealed in the early 1980s, McCown said. That's when, under the Reagan administration, the government stopped writing new contracts to subsidise American maritime giants.

Predictably, America's two biggest cargo carriers began pulling out of the US by the next decade. Maersk, a Danish carrier, acquired one, while French carrier CMA CGM acquired the other.

The 'flag of convenience' loophole

Where did these ships go? The new behemoths may shock you: Panama, Liberia, and the Marshall Islands.

Those three countries have the most ships by deadweight tonnage registered with their flags. It's thanks to a trick in which a ship may be owned and operated by one group, but registered in another country. About three-quarters of ships are registered in a country separate from where they're owned.

German shipping giant Hapag-Lloyd, for instance, operates the ship Afif, which is owned by a company based in the United Arab Emirates. But Afif flies under the Marshall Islands flag. A beach in the Marshall Islands, where I believe I need to take a reporting trip soon to better understand the shipping crisis.
Shilo Watts/Getty

Countries like the Marshall Islands have an "open registry" in which anyone can register their vessel there, sometimes called a "flag of convenience."

And boy, is it convenient!

The reason for this complexity is, of course, that it saves money. Registering your ship in, say, Panama means you can hire cheaper labour, deal with fewer pesky safety regulations, and avoid income taxes altogether.

Mercogliano said the open registry trend, which began after World War II, was a major slam to American shipping power.

"None of the big shipping companies are American anymore," Mercogliano said. "Basically, everything shifted overseas. And at the same time that we see our fleet decreasing, global trade has increased tremendously."

How the wimpy American fleet points to the shipping crisis

Even if there were more American ships, we would still have a global crisis. China, South Korea, and Germany, all of which have strong ocean carriers, are also experiencing the congestion that's striking US ports.

Still, some say the lack of American presence in shipping, particularly at our own ports, could be harmful. The federal government launched an investigation last fall into allegations that foreign-owned shipping companies are refusing to carry containers loaded with American agricultural goods - instead preferring to move empty containers, which have a shorter turnaround time.

"The control is outside of US control, it's in the hands of these other companies," Mercogliano said. "Now I'm not saying it's nefarious or conspiratorial, but they have different interests."

It's clear that our government has turned away from its 20th century concept that a robust shipping industry is critical for a strong nation. A 2017 report noted that America's ports mostly compete for state and local funding, rather than federal - a far cry from our previous obsession with funding domestic shipping. A man unloads American logs from a cargo ship in Osaka, Japan in 1983. This predates the lumber shortage.
Gary Braasch/CORBIS/Corbis via Getty Images

And that shift has unfortunately coincided with an upswing in trade - from 1979 to 2019, global cargo trade has increased by nearly threefold. Ships, which have increased in average size by five-fold since 1990, are becoming too big to dock at some of these ports.

The elevated demand for stuff we've seen this year, coupled with our inability to process an upswing in trade, is causing this year's shipping crisis - which is estimated to stretch into 2022, causing shortages and price upticks along the way.

Infrastructure improvements aren't sexy. But if bringing American shipping into the 21st century means we can avoid shortages of "just about everything," we better cozy up to them.