The city is located in Sirat Mountains, inland from the Red Sea.

On top of the heat, it gets busy. While a little over 1.5 million people live there permanently, more than 2 million pilgrims travel to Mecca annually. Every Muslim, who is able and can afford it, is expected to travel there at least once in their life for the Hajj. Non-Muslims are not allowed to enter Mecca.

For those who live there year-round, winters are a little more manageable. But it never gets cold.

These photos show what it's like in the world's hottest inhabited city. In Mecca, during the summer, between June and September, temperatures can reach 48 degrees Celsius, and the streets get busy.

The city has about 1.5 million permanent residents, but more than 2 million pilgrims flood into Mecca for six days for the Hajj every year. The main day of the pilgrimage, which requires worship outside from sunrise to sunset, can be particularly trying. The closest city to Mecca is Jeddah, a seaside port on the Red Sea. It's about 112km away and requires travelling through the desert to get there. Mecca's wild temperatures are due to its location, in a dry valley at the base of the Sirat Mountains ... Sources: Britannica, Seasons of the Year

... surrounded by the Arabian Desert. Its average annual temperature is 30 degree Celsius, but it's a dry heat. Sources: Britannica, Seasons of the Year

There's very little greenery, as the view from space shows here. The white structure in the middle is the Great Mosque. For the next 10 years, the Hajj will be during the summer. But the high temperatures are nothing new. Seen here is a pilgrim being given a cold bath to cope with the heat in 1967. Dealing with the heat requires preparation. Hotels and some home owners, like the Saudi royalty seen here, have air conditioning. And one of Mecca's cooler spots is around the Kaaba, one of Islam's most holy objects. The ground near the Kaaba is made from white Thassos marble, which was imported from Greece. It reflects the sun and heat during the day and remains cool even on hot days. The area also has an abundance of air conditioning. But people have to go outside. It's common for pilgrims to buy lots of water to help them get through the heat later in the day. For those who need to be outside in the heat, umbrellas are a must. Some have modified them to limit energy use as much as possible. One man has even created a "smart umbrella," which uses solar energy to power a fan to keep the user cool. It also has a flashlight, a USB outlet to charge phones, and a GPS tracker. And whenever there's time for a break, people keep drinking water.

Water is even sprayed into the mouths of those in need. 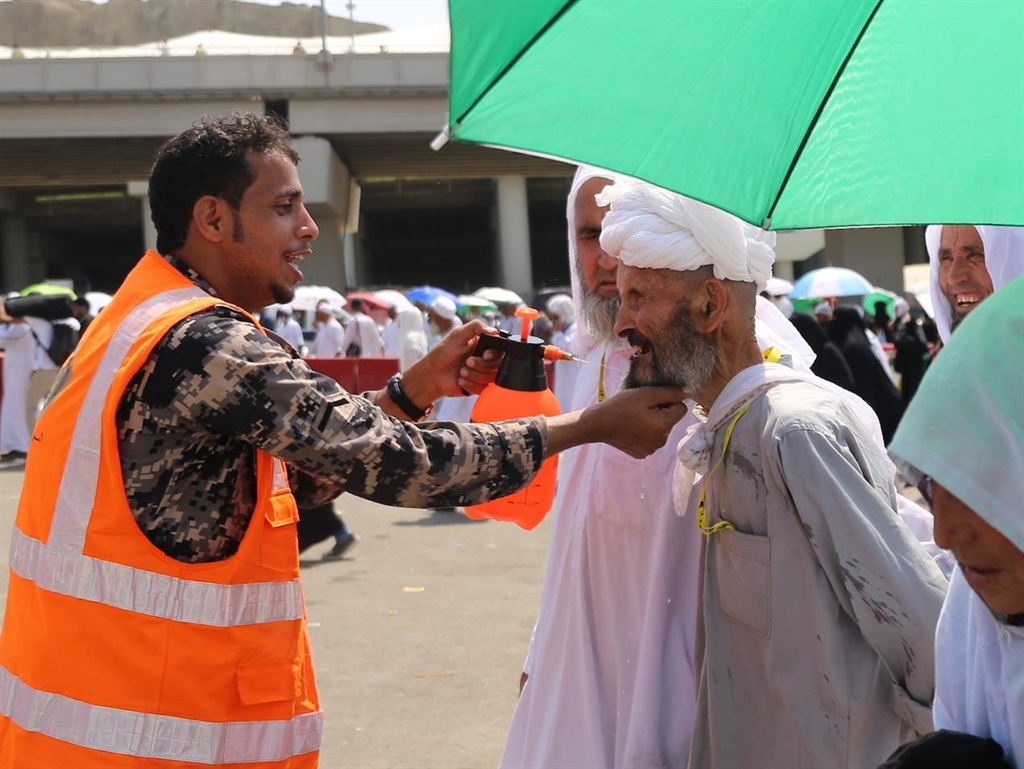 Since Mecca is in the desert, even during the evening temperatures only drop to about 84 degrees Fahrenheit (28 degree Celsius). Sources: My Weather 2, Weather and Climate

For the 1.5 million residents who live there year-round, two of Mecca's main industries are now tourism and construction. Thirteen of 15 of Mecca's old neighbourhoods have been rebuilt for tourism and commerce. Smaller businesses like tour guides, vegetable sellers, and street vendors are struggling to compete with the newly built fast-food chains and hotels.

During the winter, locals can look forward to milder temperatures, with an average high of 30 degrees Celsius, and a low of 18 degree Celsius. Over the entire year, there is usually fewer than 13 centimetres of rain. Due to the arid, harsh conditions, wild animals and plants aren't abundant.

Other wild animals in the area include wolves, hyenas, foxes, mongooses, and jerboas. There has also been a surge in monkeys in Mount Al-Noor District since weapons used to shoot them were banned. If carbon emissions continue at their current rate, by 2100, Mecca's maximum temperature could soar to 55 degree Celsius. If it continues to get hotter, the Hajj may become a physically impossible journey due to heat stress.