Authorities in Hong Kong seized nearly 4,000 cell phones from protesters, and activists are concerned that police are reading their messages and installing spyware A man holds up his smartphone light during the rally. Memorial rally at Tamar Park in Hong Kong to mourn the death of a 22 years old university student, Alex Chow Tsz Lok who died from a serious brain injury during a fall on November 4th as police skirmished with demonstrators last weekend. He was left in critical condition and died after suffering a cardiac arrest.
Keith Tsuji / SOPA Images/SOPA Images/LightRocket via Getty Images

Hong Kong police has seized more than 3,700 mobile phones used by protesters in the last several months of ongoing protests, the city's security chief said during a meeting.

Secretary for Security John Lee disclosed the information during a Legislative Council meeting on Wednesday. Lawmaker Charles Mok questioned the security chief about possible abuse of power among police and discussed complaints of police inspection of mobile phones without consent.

"Under Hong Kong law, law enforcement agencies have the responsibility to prevent and detect crime to protect citizens' lives and property. Over the course of carrying out their responsibilities, law enforcement agencies may exercise their search and seizure, confirmed by relevant legislation, and seize and examine various objects of suspected offenders, including mobile phones and other similar devices," Lee told the council in response to Mok's questioning.

"From June to November 2019, police processed 1,429 cases that involved mobile phones as evidence," Lee said. "Among those cases, 3,721 mobile phones belonging to arrested persons or suspects were involved, and the relevant cases were all processed with search warrants issued by the court," he added.

More than 6,000 people have been arrested since protests against a proposed extradition bill erupted in June.

Lee said that generally, police only conduct "digital forensic examination" on mobile phones only after obtaining a warrant, and added that the information obtained would be used in relevant trials.

He declined to reveal which "critical technologies" are used in these types of examinations, calling them "confidential information."

Lee cited an October 2017 ruling which said that police "may seize mobile phones found on an apprehended person or in and about the place in which they were apprehended, and may examine the content of these mobile phones without obtaining a warrant only in exigent circumstances."

Lee said that all inspections are required to be done lawfully. 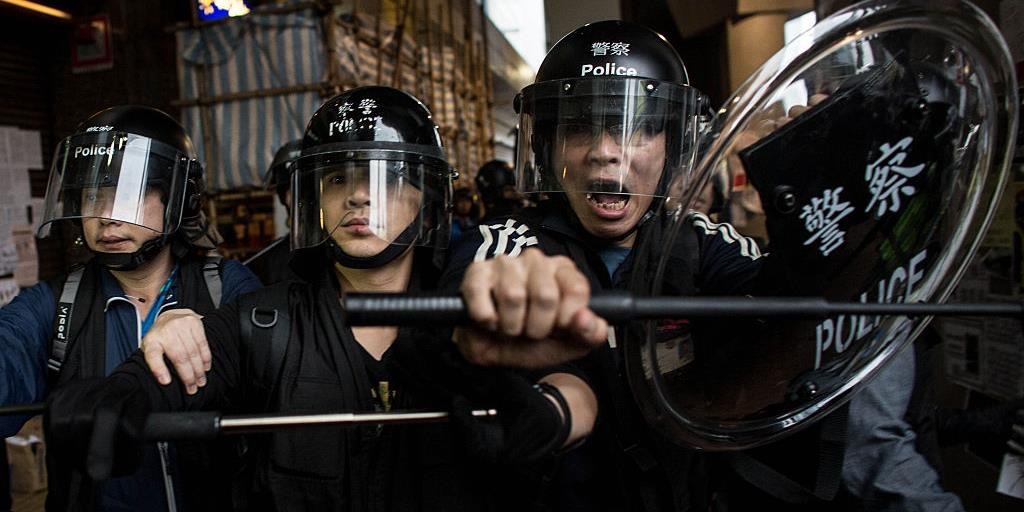 Police advance on pro-democracy protesters at the Admiralty MTR station on December 1, 2014 in Hong Kong. Leaders from the Federation of Students called on fellow protesters to attend a rally and come prepared for escalated action. Protesters were asked to bring masks, umbrellas and helmets in a bid to move the protests forward after police successfully cleared the Mong Kok protest site earlier this week.
Chris McGrath/Getty Images

Some lawmakers and activists have argued that many of these mobile phone examinations are carried out without public knowledge.

According to Hong Kong Free Press, legislator Eddie Chu Hoi-dick claimed that many of the digital forensic examinations were conducted without the knowledge of the mobile phone owners.

And Mok, the lawmaker who questioned Hong Kong's security chief in the meeting, called the investigations a violation of privacy, saying it would be difficult to know whether phones were infected with spyware after being searched.

"You break into the phones and read the contents, all contents, whether they are related to the cases being investigated or not," he claimed at the meeting on Wednesday. "And no one will even know if the phones will be installed with spyware after being seized by officers."

Last month, pro-democracy activist Joshua Wong said in a Twitter thread that police seized his phone when he was arrested on August 30.

He said that before his trial, he "NEVER provided any passwords to police, nor received any notice nor warrant for a search of my mobile device."

But during his trial, he says police submitted evidence which included four text messages sent from his iPhone, evidence that he said was obtained by "state-sponsored hacking."

"Such warrantless search is also a blunt violation of the freedom & privacy of communication enshrined in Basic Law," he said.

According to the South China Morning Post, police later claimed that the search was "conducted under a magistrate-issued search warrant."