The Honda HA-420 HondaJet is one of the most capable small private jets in the world.

The original HondaJet, which entered production back in 2015, was the Japanese industrial giant's first foray into the world of aviation as a manufacturer. It was also the culmination of three decades worth of research and development work led by Honda Aircraft Company CEO Michimasa Fujino.

Read more: HondaJet's CEO explains why its private jet's nose is inspired by a pair of Ferragamo high heels.

In 2018, Honda introduced an updated version of the plane called the HondaJet Elite. The name matches with the designation given to the company's luxury spec automobiles.

Updates include the addition of an extra fuel tank that boosts range from 2,250km miles to more than 2,700km, a quieter cabin, and an available galley.

The Elite was initially sold alongside the original HondaJet but has now taken over as the only version of the plane in production.

Recently, Business Insider had the opportunity to experience a flight on board the company's latest offering at Honda Aircraft's home in Greensboro, North Carolina.

In case you are wondering, the HondaJet Elite starts at R70 million, R5 million more than the original HondaJet.

Here's a closer look at the HondaJet Elite's coolest features.

1. Carbon composite airframe: The cabin is made of a carbon fiber epoxy composite that is designed to be lighter and stronger than traditional aluminum construction. Here's another view of the nose. 3. Single pilot operation: The HondaJet is designed to be operated by only one pilot. This opens up HondaJet the market for owner-operators or people who fly their own private jets. 4. Modern cockpit: The HondaJet Elite is equipped with an updated version of the Garmin G3000 avionics suite found in the original variant. The cockpit features three 36cm high definition displays along with... 5. Custom engines: The HondaJet is powered by a pair of GE Honda HF120 turbofan engines that each produce 908kg of thrust. It is currently the only jet in the world produced with this engine. 6. Wing mounted engines: Unlike most private jets, the HondaJet's engines are mounted on over-wing pylons. According to Honda, this design contributes to a roomier and quieter cabin. As a result, the seats can move forward, backward, and to the side. 8. Touchpad controller: the jet's cabin tech can be operated using your smartphone or by accessing a built-in touchpad. The features include the climate control and... 9. A speaker-less stereo: the HondaJet does not use traditional speakers. Instead, its cabin is surrounded by a couple of dozen transducers that vibrate inside the plane's leather-lined interior walls. As a result, the music feels like it envelopes you. Flip down the toilet seat cover and the toilet is converted to another place for a passenger to sit. There's even a seatbelt. In front of the toilet is a cobalt washbasin. 11. Skylights: There are a pair of skylights located in the ceiling of the lavatory. Looking closely and you can see the carbon weave of the fuselage. It's located in the rear of the fuselage by the right engine. ... a 17 cubic meter trunk immediately aft of the passenger cabin and... ... a three cubic meter frunk in the nose. 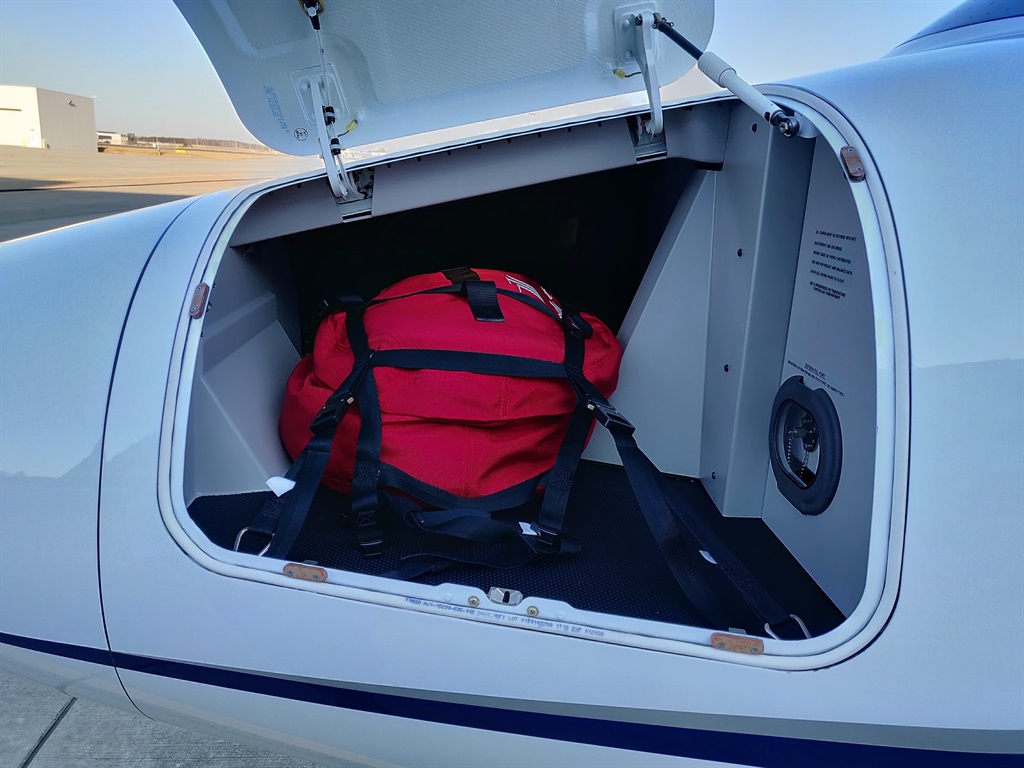