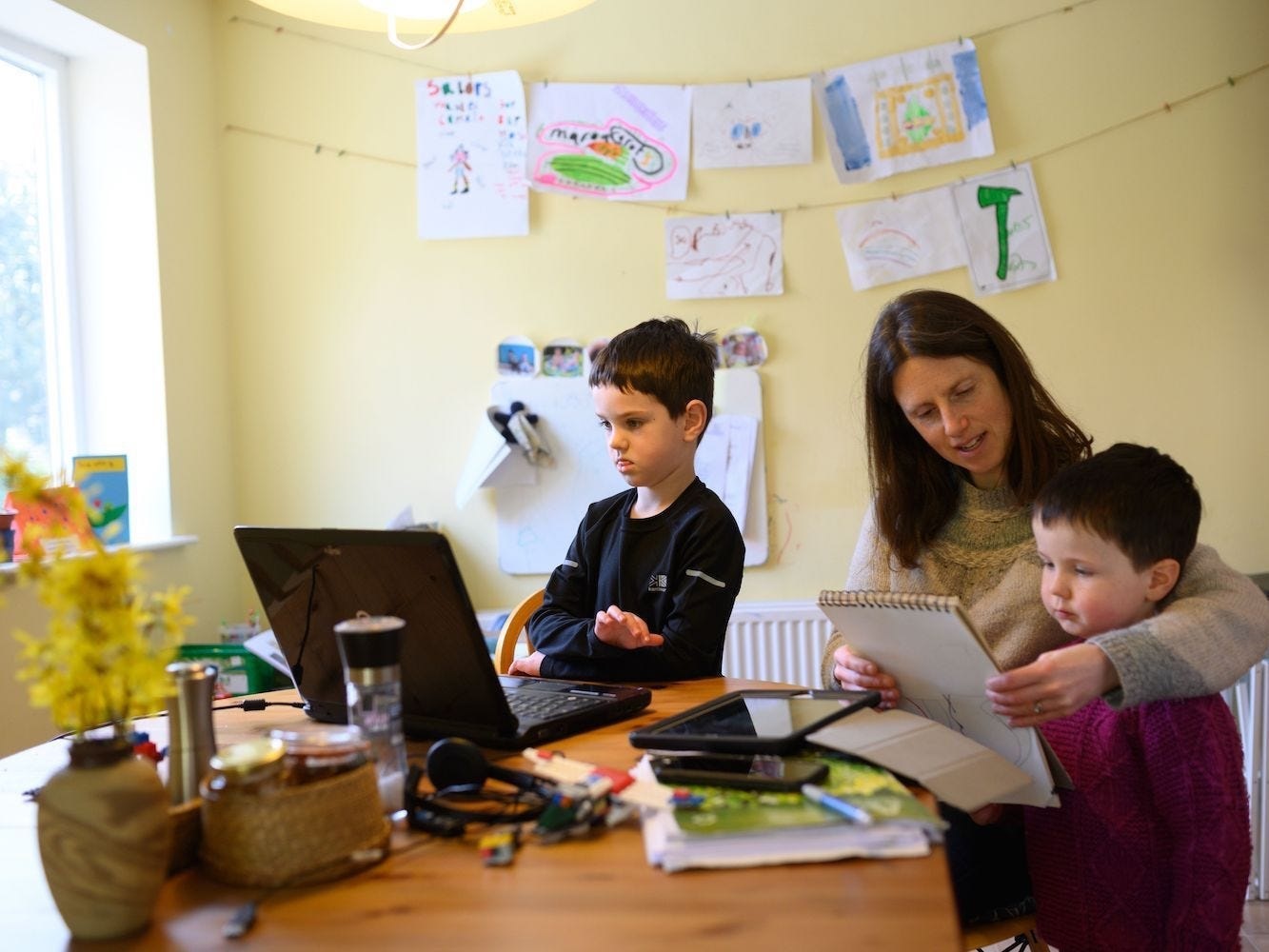 Leo and Espen are assisted by their mother Moira as they homeschool and navigate online learning resources provided by their infant school in the village of Marsden, northern England, on March 23, 2020
Oli Scarff/AFP via Getty Images

As schools start making preparations to welcome back students amid the coronavirus pandemic, a growing number of parents are taking matters into their own hands and are choosing to homeschool instead.

Homeschooling in the UK has long been regarded as unconventional until now. Health uncertainties that have arisen around the reopening of UK schools this week have left many parents feeling like there's no other choice.

"I kind of feel pushed into this decision. It's not that I don't want my child to go to school, I'm just worried about the risk of allowing them to return," Eleanor, a mother of an 11-year-old, told Business Insider.

Eleanor, who is from the northwest town of Milton Keynes, has asthma and lives with her 90-year-old mother-in-law. She has been leaving her house as little as possible because she is still frightened of catching the disease.

"It feels like we have this little protective bubble which has been running smoothly up until now, and now there's this risk of our son bringing something back. If the reopening of schools and the communication by the government would have been better, perhaps I wouldn't feel this way," she added.

A poll by the online agency childcare.co.uk, which surveyed 5,000 parents, found that 30% were not planning to send their children back to school. Of those, 91% said they would continue with homeschooling for the foreseeable future, or until a vaccine is found.

In March, the number of children officially known to be receiving home education rocketed by 119% in parts of England, iN ews reported. While there's no official updated number going into the school year, UK homeschooling organizations say they see a significant uptick in interest.

Hannah Titley, who runs The Golden Circle — the UK's first professional homeschooling group — told Business Insider that there'd been a "surge in demand" since March that has continued into September.

The company, which co-ordinates teams of qualified teachers to deliver lessons to at-home students, has seen an increase of almost 40% since the beginning of lockdown. A list of home schooling routine is seen at Donna Eddy's home on April 09, 2020 in Sydney, Australia.
Brendon Thorne/Getty Images

"We never usually have students sign up for the summer term, but I think the lockdown and school closures forced a lot of parents to try homeschooling who wouldn't have otherwise considered it," Titley told Business Insider.

The UK home education experience is mirrored in the US. Homeschooling applications are surging in several states across America, including Nebraska, North Carolina, Florida, and Vermont.

In North Carolina, so many people applied to homeschool last month that the government website was temporarily unable to accept applications. The National Home School Association also received more than 3,400 requests for information on a single day last month, up from between five and 20 inquiries per day before the coronavirus.

The reasons why people are turning to home education vary drastically and are not always because of pandemic fears.

Some families, for example, found that the online courses offered by schools over the lockdown period weren't efficient or good enough, while others found that their children worked a lot better at home than they ever did at school.

It was the case for Morgan, a mother of a 6-year-old from Canterbury, Kent. She discovered a new side to her daughter during the lockdown and is still debating about sending her to school.

"My main reason for wanting to home educate this year is because my daughter has been much happier at home. I didn't realize truly how anxious she was at school until it stopped and the anxiety disappeared," Morgan told Business Insider.

"Academically she's progressed far more in four months then she has in school ever… She's just been happier and more like herself again, which is such a joy. She recently told me: 'I like being homeschooled as when I'm with you mummy I feel like me,'" she added.

For Morgan, being present while her daughter was learning over the lockdown period also put the curriculum under a microscope.

"I think that our school system in this country does not help our kids. Primary education especially, has been researched for many years, and we do it all wrong here. I don't want my daughter to be forced to learn something when her brain is just not ready yet," Morgan said. Schoolchildren wearing protective mouth masks and face shields attend a course in a classroom at Claude Debussy college in Angers, western France, in May 2020.
DAMIEN MEYER/AFP via Getty Images

Parents are left to fend for themselves with little government guidance

But while there's more interest in teaching children at home, parents who've made the decision are faced with little support from the government.

In the UK, parents choosing to homeschool don't have to follow a national curriculum, and taking exams and qualifications are not compulsory either.

"It's quite sad because you're sort of on your own. If you choose to step out of that [school] system, there's not really much support from any officials," Sarah Vaughan, a trained teacher, and mother of three told Insider.

Vaughan is considering not sending her autistic and dyslexic 12-year-son to school because the new regulations would overwhelm him.

"What do you do? Not enough thought has been put into this. It's difficult enough to get 1,500 children back into school, but then there is no effort to look after individual children who have specific needs," Vaughan said.

But the mother considers herself lucky that she has a teaching background and some previous experience in homeschooling. The family homeschooled their son for a year in 2017, but even then, there was little oversight from the local authority.

"I saw a lady from the local authority once, and she came to the house to check if I had a table and a chair, and when I showed her the curriculum I wrote myself that I wanted to follow, she said: 'OK' and left. That was it," Vaughan said.

The government and local authorities also have yet to introduce a compulsory register of homeschooled children — which is hotly debated within the community.

"Most of the homeschooling parents do a great job, but there is a risk that a bunch of students will slip through the gaps and that's a safeguarding concern," said Titley, who alongside The Golden Circle has set up the Home Schooling Association, which advocates for a homeschooling register.

"But there are also a lot of homeschoolers who feel like the government has already done school and it doesn't work, and they don't want that interference in their children's education," she added.

Either way, the prospect of teaching your child without much experience or support from the council can be scary and for some parents, who have never homeschooled before, can feel like a huge task.

"The responsibility for educating her would sit squarely and solely on my shoulders," Morgan said. "Making sure I can meet both her educational and emotional needs and the needs of my toddler is a hard one to get right."

Despite there being a lack of guidance on how to conduct home education from the government, parents can tap into plenty of other resources.

"There are a ton of home school groups on Facebook, and there are other groups that organize events for homeschooled children. It's not too difficult to find online material, although it is up to you to tailor the information to your child," said Vaughan.

The mother from Kent launched The Do Try This at Home School website in 2016, where she regularly provides parents with ideas of making homeschooling enjoyable for their children. "I've received a lot of emails in the last few weeks from parents who are unsure what to do," Vaughan said.

Like The Golden Circle, professional homeschooling or tutoring services is also another option for parents, although fees that start at £65 ($86) an hour.

Another alternative is"Flexi-school", which means a child is registered at a school in the usual way but only attends school part-time, while spending the rest of the week educated at home. However, not all schools make this available to students.

Overall, there's a sense that parents are just looking for certainty in a time of upheaval.

"There have been so many U-turns that parents just feel like the government doesn't always know exactly what it's doing. It feels like they're making it up as they go along. But homeschooling allows them to get that control back," said Titley.