Hong Kong protests escalate dramatically as demonstrators use acid on the police, and officers shot a man in the chest The Hong Kong protests escalated Tuesday as a protester was shot with a live round for the first time in 17 weeks of demonstrations, while police reported being doused in acid.

The protests - timed to coincide with China's National Day, and the 70th anniversary of the ruling Communist Party - took on a dark character at multiple clashes around the city.

A male protester was shot in the chest by police using live rounds on Hoi Pa Street, in the city's Tsuen Wan district, on Tuesday, The Associated Press reported, citing police officials.

It marks the first time live rounds have been used by police during the 17 weeks of protest. A video posted to Facebook purportedly showing a protester in Hong Kong lying on the road with a bullet wound to the chest.

A video posted to Facebook shows a masked protester lying in pain on the ground, purportedly the victim of the gunfire, calling out: "My chest is in pain, take me to the hospital."

In a separate confrontation, protesters used an acid-like substance on police officers. The Hong Kong Police posted images of their officer's burns on Twitter. 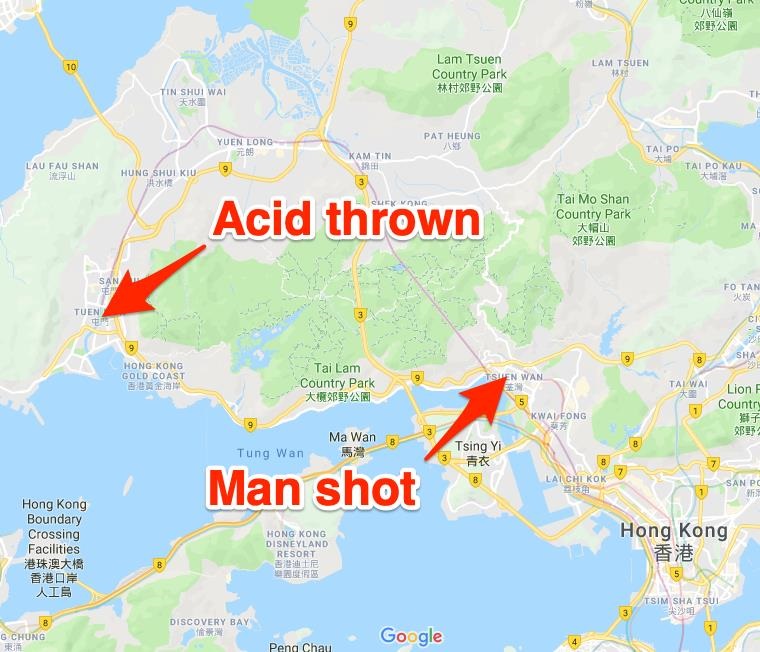 A map showing the locations where protests threw acid at Hong Kong Police and where police reportedly shot a demonstrator in the chest with live ammunition.
Google Maps

"The Police strongly condemn the violent acts and appeal to members of the public to mind their personal safety."

The Times also reported that "seven masked men used a Molotov cocktail to burn posters of Xi Jinping outside a Chinese Army barracks" on Tuesday.

The escalation comes at a symbolic time in China.

Tuesday marks 70 years since the Chinese communist party, led by founder Mao Zedong, seized control of the country during a bloody civil war.

The milestone was commemorated by a huge parade in Beijing's Tiananmen Square, featuring a show of military might from The People's Liberation Army.

At the parade, after weeks of speculation, China finally unveiled the Dongfeng-41 (DF-41, CSS-X-10) missile. It's believed to be the world's longest intercontinental weapon, which can strike targets 9,320 miles away. The Dongfeng 41, a nuclear-capable intercontinental ballistic missile, is on display during a military parade in Beijing on Oct. 1, 2019, marking the 70th anniversary of the founding of the communist People's Republic of China.
Getty

In a post on Facebook on Saturday, the Hong Kong edition of Chinese state newspaper China Daily warned that Hong Kong "anti-government fanatics" were "baying for blood" ahead of the celebrations.

Hong Kong Police on Monday warned that planned protests in the city were expected to be "very, very dangerous" and claimed that hardliners had called on people to murder police and set fire to gas stations.

Read more: Protesters in Hong Kong may have almost won this battle - but the fight for freedom and identity is far from over