The 12 highest-paid soccer players in the world

Forbes released its 2019 edition of the 100 highest-paid athletes in the world, and it is Lionel Messi who takes the top spot with $127 million.

For the first time since the list debuted in 1990, three soccer players top the list with Cristiano Ronaldo and Neymar rounding out the top three.

The three are joined by nine other soccer players that make up the annual list of 100.

These are the 12 highest-paid soccer players in the world. The last soccer player on the list at No. 99, Salah signed a five-year deal with Liverpool in July 2018. He's been the Premier League's top goal scorer, earning him the Golden Boot award for the past two seasons.

Salah helped his team to a second consecutive UEFA Champions League Final in 2019. In 2018, Bale scored two goals off the bench to lead Real Madrid to its third straight UEFA Champions League victory.

He's ranked No. 79 among all athletes. In May, Griezmann announced that he was leaving Atletico Madrid after five years. He played 260 matches and scored 133 goals. Where he lands next is yet to be seen.

He played an important role during the 2018 World Cup for France, scoring or setting up eight of the 14 goals that led the team to victory. 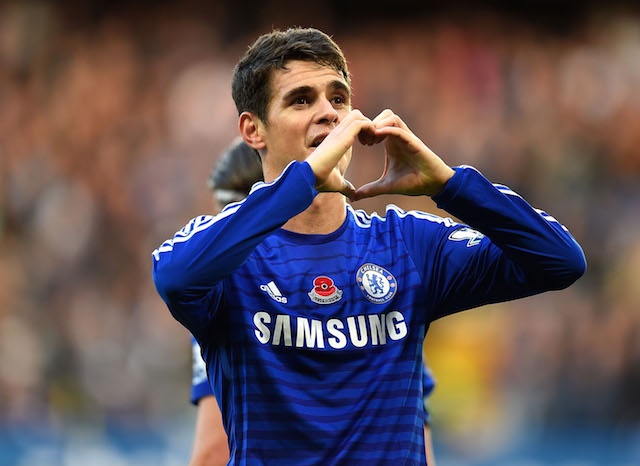 Oscar rose to popularity during his five years with Chelsea, but in 2017 he made a surprising decision to sign with Shanghai SIPG of the Chinese Super League.

The lucrative deal quadrupled his weekly take-home pay. He's ranked No. 66 by Forbes. Ranked No. 27 by Forbes, Ozil joined Arsenal in 2013 and signed a three-year extension in 2018 that doubled his annual pay.

He and his fiancé announced they would celebrate their wedding by funding 1,000 life-changing surgeries for underprivileged children.

Ozil also has two professional esports teams - one to compete in EA Sports FIFA competitions and another for Fornite. Mbappe became the youngest French player at 19 years old to score in a World Cup and second-youngest in a World Cup Final in 2018. He joined Paris Saint-Germain on loan in 2017 and signed a contract with the team in 2018.

Read more: France's 19-year-old wunderkind is donating his World Cup winnings to charity - and the total could be more than $500,000 Sanchez was moved from Arsenal to Manchester United in 2018. He scored just six goals and had five assists in 37 appearances in his first full season as he struggled with injuries.

Sanchez also plays a leading role in the 2019 film 'Mi Amigo Alexis' about a young Chilean boy who dreams of following in his hero's footsteps. Iniesta spent 22 years with Barcelona, including three as captain, before retiring from the national side and joining Japan's Vissel Kobe in 2018.

Iniesta has a winery that began production in 2010, including a bottle named Minuto 116 for the minute he scored Spain's title-winning goal in the 2010 World Cup. Pogba sits at the No. 44 spot on Forbes' list. He returned to Manchester United in 2016 after four years with Juventus.

After France won the World Cup in 2018, Pogba auctioned off his game-winning cleats for $30,000, which he donated to disadvantaged high schoolers. Neymar signed with Paris Saint-Germain in 2017. His transfer from Barcelona was the most expensive in the world at $263 million (€232.5 million). The French club paid that amount in full before his signing.

Neymar is the second most popular athlete on social media behind Ronaldo. After nine years with Real Madrid, Ronaldo signed a four-year deal with Juventus in 2018. His Juventus jersey made over $60 million (€53 million) with 520,000 sales within 24 hours.

The five-time FIFA Play of the Year is the all-time leading goal scorer in the UEFA Champions League and the most followed athlete on social media. Messi signed a new contract with Barcelona in 2017 that keeps him in the Spanish club through 2021. His exact contract details weren't released at the time, but he is receiving $80 million (€70 million) per season, according to El Mundo, via EuroSport.

He also has a lifelong deal with Adidas.

Since his first match with Barcelona in 2004, Messi has accumulated 33 club titles in 687 matches.