The ceiling of the Sistine Chapel.
Wikimedia Commons

People love finding hidden symbols and secret codes in all sorts of objects - including art.

It might be common knowledge that Da Vinci was an accomplished musician, but not many people know about the song he painted into "The Last Supper," using rolls and hands in the place of music notes. And you've probably seen the "Mona Lisa," but not with a microscope - she has a minuscule code hidden in her eyes.

Here are 14 famous works of art that have hidden symbols.

"The Ambassadors" by Hans Holbein the Younger has a hard-to-find reference to mortality. This entire painting has a very realistic look to it, until you notice the blob (for lack of a better word) in the bottom-middle between the the two men.

Apparently, the "blob" is actually a skull that's been distorted. If you look at the painting from the right, it turns into a human skull.

Some believe that the skull is a reference to the Latin phrase "memento mori," which means "remember you shall die." Memento mori was allegedly the motto of the man who commissioned the painting, Jean de Dinteville (the man on the left).

"Madonna with Saint Giovannino" by Domenico Ghirlandaio has found itself at the center of UFO conspiracy theories. Yes, that blurry circle next to the Madonna's head has been at the center of a controversy for years. Many UFO conspiracy theorists are convinced that it's a depiction of an alien aircraft.

While it doesn't look like much here, when zoomed in, the circle definitely has a UFO-esque look to it.

The section of the ceiling of the Sistine Chapel, called "Creation of Adam," has an easily-missed reference to the human body. The shape of the red cloak surrounding God is an astoundingly anatomically correct rendering of the human brain. Does this mean that Michelangelo believed that God was the creation of the human brain? That will never be known, but could be an interesting look into the brain of one of the most iconic artists in history.

This idea is so widespread it was even referenced by hit HBO show "Westworld."

"The Last Supper" has a song hiding in it.

The song hidden within "The Last Supper" is an example of a real life "Da Vinci code."

An Italian musician discovered that when he lined up the rolls on the table and the hands of the Apostles on a standard musical staff, they worked as musical notes. This might sound like a long-shot, until you hear the song it produces.

Vincent Van Gogh is believed to have referenced "The Last Supper" in another one of his paintings: "Café Terrace at Night." Some believe that Vincent Van Gogh, an icon in his own right, paid homage to Da Vinci in his painting "Café Terrace at Night." Specifically, there are 12 patrons at the café (like the Apostles), and the server in the middle definitely has a Jesus-like look to him.

There's also subtle cross imagery right behind the server in the windowpane.

Though hard to see, Michelangelo Merisi da Caravaggio included a little piece of himself in "Bacchus." A small rendering of Caravaggio can be seen as a reflection in the jug of wine Bacchus has in his presence.

The mini-self-portrait was first noticed in 1922, more than 300 years after it was completed - but was forgotten about after years of poor preservation. It was rediscovered in 2009 using modern technology.

Before this discovery, it was unknown what the people in "Scheveningen Sands" were congregated around. When "Scheveningen Sands" was painted in the 1600s, it was a depiction of a group of beachgoers clustered around a beached whale. Somewhere along the way, the animal was painted over, leaving the group standing around for no visible reason.

When the restoration began at the Fitzwilliam Museum, restorators eventually uncovered what appeared to be a man floating in midair, but eventually the fin of the whale was revealed.

Why was the whale painted over? According to Shan Kuang, a restorator who worked on the painting, the depiction of a dead animal in paintings was considered offensive in the 18th to early 19th centuries.

Depending on the angle at which you view "David," you get two completely different stories. The statue of "David," of David and Goliath fame, is 17-feet-tall (5 metres). It's entirely possible that Michelangelo never even meant for people to be able to look at his face head-on. Viewing him from below, as almost everyone does, he appears to have a calm expression on his face.

But when you look at him face-to-face, David clearly has an expression of fear, or maybe anger. This is because he's about to do battle with Goliath in the most famous underdog story of all time.

A paper done by two doctors actually stated that Michelangelo left other clues to David's state of turmoil - the veins in his arms are popping out and his brow is furrowed.

This fresco has a sinister cameo from the devil in the clouds.

This hidden face was only discovered in 2011, around 700 years after it was completed. According to CBS News, art historian Chiara Furgoni noticed the face when she was trying to figure out when exactly the fresco was done.

You can clearly see a mouth, nose, eyes, and horns among the clouds.

At first, this painting by Pieter Brugel appears to be an extremely detailed portrait of a busy Dutch street, but is actually much more than that. The official title of this painting is "Netherlandish Proverbs." While there are many foreign proverbs depicted in the painting, there are also some classics that we still use today in America.

Clockwise starting from left: the Earth is upside-down (the whole world is upside-down), a man is running with his behind on fire (running like your butt's on fire), a man is warming himself at a house fire (not caring who is hurt as long as it benefits you/roasting marshmallows at a house fire), the three figures in the back standing in a line (the blind leading the blind), a fish eating another fish (there's always a bigger fish), a man is holding a globe (got the world in the palm of your hand), a man in armor holding a knife in his mouth (armed to the teeth), and a man is hitting his head against a brick wall (hitting your head against the wall).

The "Mona Lisa" is one of the most enigmatic portraits in history. 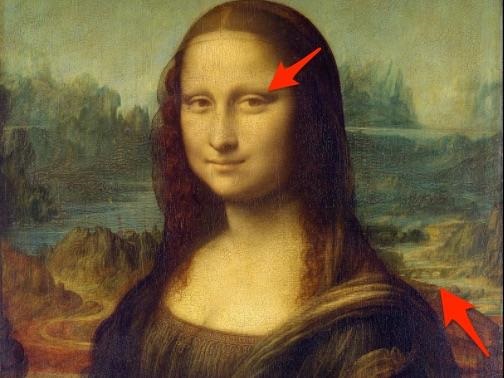 No, it's not proof that "The Da Vinci Code" is real, but there is some type of code hidden in the eyes of Mona Lisa (and the background of her portrait).

Members of Italy's National Committee for Cultural Heritage reported that - when viewed under a microscope - the letters LV are visible in one of her eyes, and there are other less-decipherable letters in there as well. Also visible is the number 72 on the arch in the background. Or they could potentially be L and 2. The painting is over 500 years old.

It's unknown what all of these symbols mean. While LV could ostensibly stand for Leonardo Da Vinci, what does 72 mean? We might never know.

The "Garden of Earthly Delights" is a huge piece of art, so there are probably dozens of Easter eggs, but the music is the most well-known. This scene is taken from the right side of the painting, from the panel that represents Hell. In the top left corner, a person with music printed across their rear end is visible.

A university student named Amelia noticed this music, and took it upon herself to transcribe the music and record it. So, now you can officially listen to, in Amelia's words, a "600-years-old butt song from hell."

"The Arnolfini Portrait" contains a small version of its creator, Jan van Eyck. "The Andolfini Portrait" is one of the most debated paintings ever. There are opinions on everything from the sandals to the dog to the positioning of the woman's hands. But a small, easily missed detail is the small (potential) self-portrait in the mirror.

In the reflection, two figures are clearly visible. Many people think one is van Eyck, due to the artist's signature. It roughly translates to "Jan van Eyck was here." So, when taken literally, the man in the mirror could definitely be van Eyck.

"Young Woman Powdering Herself" used to contain the only known self-portrait of Georges Seurat. The subject of this painting is Seurat's secret mistress Madeleine Knobloch. Seurat loved her so much that he originally inserted himself in the piece. The window with a vase of flowers was revealed to be concealing a mirror where the reflection of Seurat painting was visible.

Apparently, Seurat showed the piece to his friend who told him that it looked strange, so Seurat covered it up.