Heineken is betting on a brew made with marijuana instead of alcohol, and it could help give a boost to the struggling beer industry That's because these cans of brew contain zero alcohol. Instead of booze, the beer is made with THC, the main psychoactive ingredient in marijuana. Called Hi-Fi Hops, Lagunitas' new cannabis drink is the latest wave of a larger move by established companies diving into the marijuana industry. In addition to a brew made with THC, the ingredient in marijuana that causes a high, Lagunitas' new beer is also available with CBD, the non-psychoactive cannabis component that's thought to be responsible for many of its therapeutic effects.

Having only launched on July 30, the brew is currently available in a handful of marijuana dispensaries in California, where the drug is legal. Business Insider visited Oakland's Harborside dispensary, located on the East Bay peninsula between the neighborhoods of Fruitvale and Downtown Oakland, to check out the new $8 (R106) drink.

On a Friday afternoon, Oakland cannabis dispensary Harborside was packed. After waiting in line for roughly 30 minutes, we got a look at a display case where Hi-Fi Hops was featured beside some other edible cannabis treats. Erin Brodwin / Business Insider
At R106 a can, the drink wasn't cheap — but the price point brought it roughly in line with other canned beers. We snagged the last cans that were available. An employee at Harborside said they were selling like hotcakes.

There's one big drawback compared with other beers: You can't drink it at a bar. 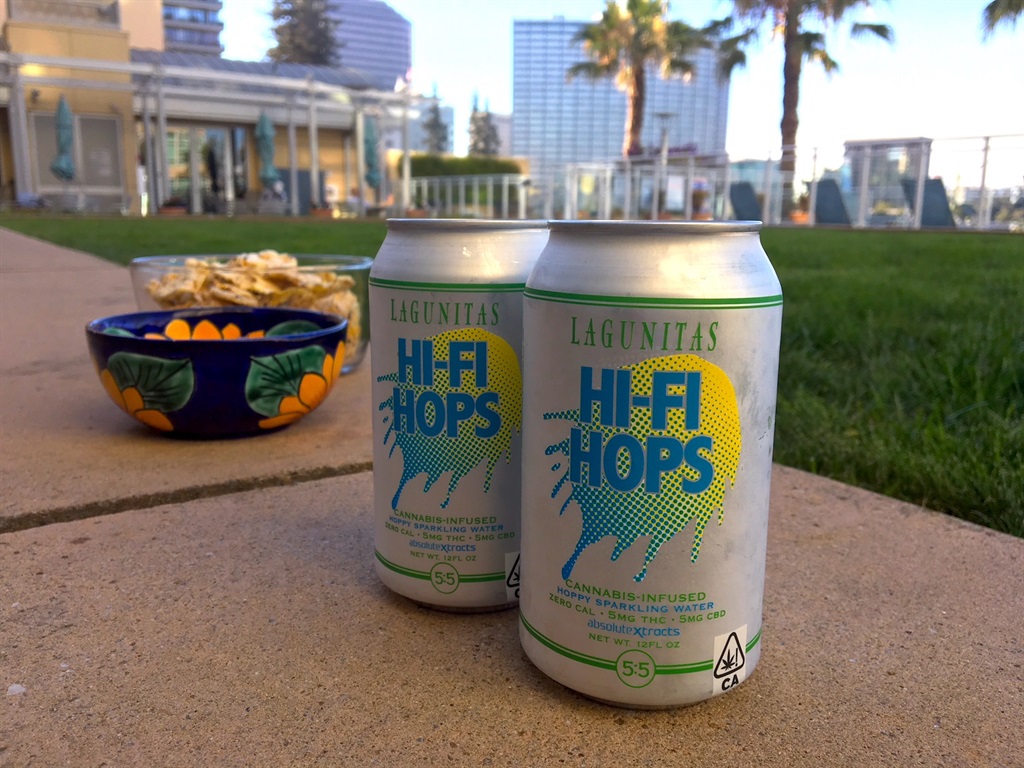 The drink is made in special cans that require a little finagling to get right — you pop the tab at the top, then slide to open. Lagunitas says the brew is made to taste a bit like regular beer: hoppy, clean, and bubbly. Despite only being available in dispensaries, the beer was conveniently portable, which is something you can't say about all currently available cannabis products. And if you don't finish a can, you can re-close the tab at the top.

The Lagunitas brew is currently available in two varieties. One is purely THC, with 10mg per can (roughly the same as you'd find in an edible like a gummy); the other is a hybrid variety with 5mg of THC and 5mg of CBD. The hybrid version is designed to have more subdued and relaxing effects.

Heineken's move into "beer" made with CBD and THC instead of alcohol is strategic. Consumer demand for marijuana products is growing fast as state-based legalization campaigns spread and as scientific awareness about the drug increases.

There has long been mainstream awareness of THC, marijuana's main psychoactive compound.

Now there's also an emerging interest in CBD, the compound thought to be responsible for many of the drug's therapeutic effects — such as pain relief.

Besides beer-like drinks, a range of CBD products made from hemp are popping up in stores around the country.Lotions, balms, beverages, vape pens, and dog treats are just a few of the products making a splash on the retail scene.

Putting a cannabis product in a beverage is a smart move for another reason, too: it could help save the struggling beer and soda industry.

Expected to reach roughly $75 million in sales by 2030, cannabis is already set to eclipse soda, according to research firm Cowen & Co.

In recent years, many major beer labels — including Heineken — have been plagued by what analysts say is a lack of interest among millennials. But a beverage brewed with cannabis could reinvigorate some of that intrigue. Plus, it doesn't come with a hangover.

These ultra-luxury villas near the Kruger will cost R90,000 a night – but you get your own butler, spa therapist, and field tracker

American execs are paying R27,000 a day to learn how to track lions – and to become better at business – in Mpumalanga