There are some things you might not know about the "Harry Potter" series.
Warner Bros. Pictures

Whether you're a hardcore fan or a Muggle who's only seen the movies, there's no denying that Harry Potter is a cultural phenomenon.

Here are 20 surprising facts about JK Rowling's magical series, from how she named her characters to how technology brought the films to life. The author, who turns 54 this year, and the wizard were both born on July 31.

Rowling gave her characters names that reflect their roles in the series. Fans can all agree that Rowling's world-building is superb, and the whimsical names she gave her characters are no exception. On Pottermore, she revealed that, early in the creative process, she came up with names for 40 Hogwarts students in Harry's year – every member of the Golden Trio included.

For example, Harry's name references his leadership qualities and Ron's pertains to his role as a sidekick.

"Harry" is the middle-English version of "Henry," a name popular among English kings through the centuries. For "Ronald," Rowling seemingly looked to the Old Norse "Rögnvaldr," a title for a ruler's adviser.

In contrast, Hermione's name, taken from Shakespeare's "The Winter's Tale" (and Greek mythology, more broadly) has less to do with her own traits than with her Muggle parents' desire to pick a clever moniker.

You never know when inspiration will strike – and Rowling jotted down the Hogwarts house names on an airplane vomit bag. Many people, celebs included, strongly identify with a specific Hogwarts house. You might be surprised to learn, then, that Rowling first wrote down the words Gryffindor, Slytherin, Ravenclaw, and Hufflepuff on the back of an airplane vomit bag. She revealed this tidbit on Twitter in 2017.

Harry Potter was named for his great-grandfather. According to Pottermore, Harry Potter shares a name with his great-grandfather. Although this ancestor – who lived in the late 19th century and early 20th century – doesn't appear in the books, his timeline would intersect with the "Fantastic Beasts" era. Here's hoping for a cameo in the spin-off series.

The magical plants in the series all come from a real-life compendium of flora.

At a glance, plant names like "Mugwort" and "toadflax" sound like words pulled from Rowling's boundless imagination. But these flora actually exist in the Muggle world. As the author explained in an interview with CBS' "60 Minutes," the plants in the series come from a compendium called "The Complete Herbal" by English botanist and herbalist Nicholas Culpeper.

But only one character in the Harry Potter universe is a figure from Muggle history. Nicolas Flamel, the eponymous sorcerer from "Sorcerer's Stone," was a French businessman and scribe born in the 14th century. The real Flamel's connection to alchemy, embellished after his death, is at best tenuous.

Edinburgh, Scotland, where Rowling resides, provided a ton of inspiration for the series.

Scotland's capital is teeming with Gothic architecture, cobblestone streets, and narrow passageways. Rowling was enchanted by the city's locales, from Greyfriars Kirkyard – where the "real" Tom Riddle is buried – to George Heriot's School, a private institution whose turreted building inspired Hogwarts.

You can even visit the cafes where Harry's story began, namely The Elephant House, the so-called "Birthplace of Harry Potter" – be sure to check out the bathroom, which is covered in Potter-centric graffiti left by fans over the years – and Spoon, a restaurant that Rowling frequented in its former incarnation as Nicolson's Cafe.

Even Stephen King was freaked out by Dolores Umbridge. Forget Voldemort; one-time Defense Against the Dark Arts professor Dolores Umbridge has been deemed one of fiction's creepiest villains by none other than famed horror writer Stephen King.

"The gently smiling Dolores Umbridge, with her girlish voice, toadlike face, and clutching, stubby fingers, is the greatest make-believe villain to come along since Hannibal Lecter," King wrote in his review of "Order of the Phoenix" for Entertainment Weekly.

Like the multitude of spells in the series, Hogwarts' official motto is also in Latin. It's no secret that Rowling, who studied Classical languages and mythology at Exeter University, is familiar with Latin. Not only do the series' many spells come from that ancient language – so does Hogwarts' motto, "Draco dormiens nunquam titillandus" ("Never tickle a sleeping dragon").

"You know the way that most school slogans are things like persevere and nobility, clarity, and fidelity or something, it just amused me to give an entirely practical piece of advice for the Hogwarts school motto," Rowling explained in a 2005 BBC interview. 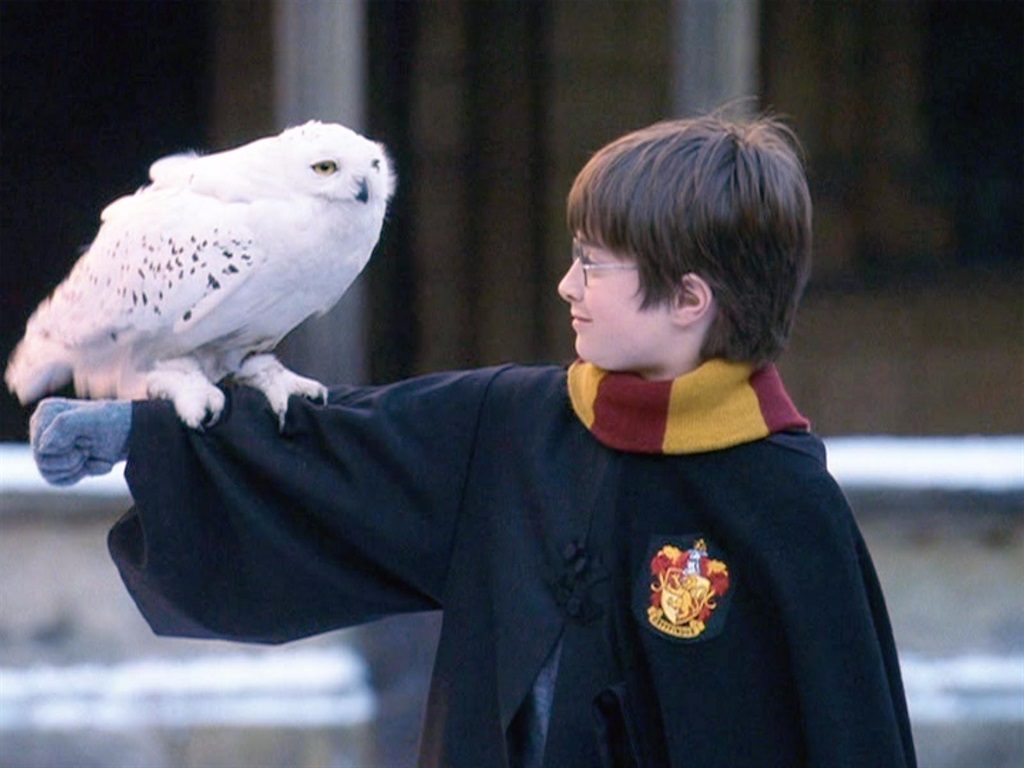 Magical creatures aside, there were a slew of ordinary animals in the Harry Potter movies – and they were overseen by a separate animal production team. Four different owls played Harry's bird, Hedwig and over a dozen rats portrayed Ron's pet rodent, Scabbers.

The "Harry Potter" books have been translated into around 80 languages, from Albanian to Hebrew to Scots. 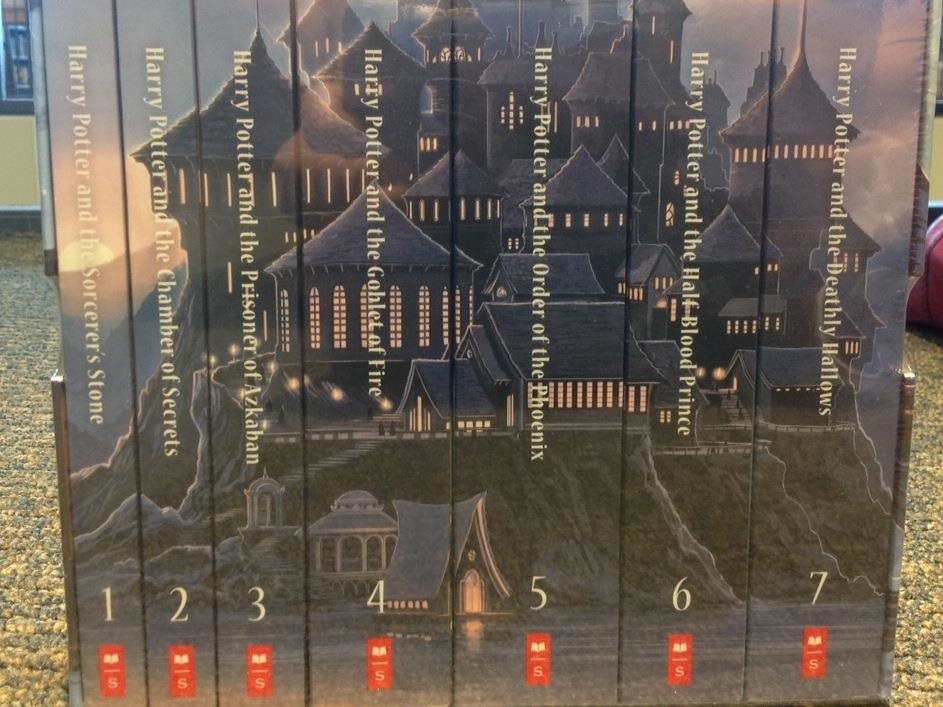 Selling more than 500 million copies worldwide, the "Harry Potter" books have been translated into 80 different languages - most recently, Scots, a language spoken as a first language by 90,000 people.

It may be hard to imagine someone other than Daniel Radcliffe as Harry, but the role could have been played by another actor. Prior to a creative row with Rowling, Steven Spielberg was pegged to direct "Sorcerer's Stone" – and he wanted Haley Joel Osment (of "Sixth Sense" fame) to play the Chosen One. In fact, Daniel Radcliffe beat out more than 300 child actors for the part of a lifetime, according to The Telegraph.

Peeves, the mischievous Hogwarts ghost, was supposed to appear in the films.

One of the most notable differences between the books and the movies is mischievous Hogwarts ghost Peeves' absence from the film adaptations.

The late British comedian and actor Rik Mayall was actually cast as the poltergeist in "Sorcerer's Stone" - but director Chris Columbus cut Mayall's scenes after a few weeks of shooting because he didn't like the look of the character onscreen.

"It was three weeks later, so I was in the film for around three weeks and then they cut me out. But I still got the money," Mayall said during an interview for his 2011 film "When Evil Calls: The Raven." "So that is the most exciting film I've ever been in because I got the oodle and I wasn't in it. Fantastic."

But there was a secret, film-exclusive character hidden in the newspaper props designed for the movies. Design firm MinaLima, which created fake newspapers for many of the films, hid a secret character in the magical periodicals. Known as the Ginger Witch, this elusive lady is a criminal whose escapades span decades.

First appearing in "Prisoner of Azkaban," you'll also spot her in the "Fantastic Beasts" movies.

When she invented Dementors, Rowling drew from her past experiences with depression. When she was in her 20s, Rowling struggled with depression. During an interview with Oprah Winfrey, she shared that Dementors are based on the "hollowed-out feeling" of depression.

"I know sadness. Sadness is to cry and to feel. But it's that cold absence of feeling - that really hollowed-out feeling. That's what Dementors are," she said.

Rowling planned in advance who would meet a grim fate in the series — but she decided to spare one character's life at the last minute. Character deaths are one of the narrative elements that Rowling plotted in advance. Originally, she planned for Ron's dad, Arthur Weasley, to meet a grim fate in "Order of the Phoenix" - but she changed her mind.

"I think part of the reason for that is there were very few good fathers in the book," she said in an interview with Today. "In fact, you could make a very good case for Arthur Weasley being the only good father in the whole series."

To prevent early leaks of "Harry Potter and the Deathly Hallows," the series' publisher, Bloomsbury, gave the seventh and final book some quirky codenames. Early proofs and print-outs of "Deathly Hallows" were given humorous red-herring titles such as "Edinburgh Potmakers" and "The Life and Times of Clara Rose Lovett: An epic novel covering many generations."

Special effects in the films ranged from green screens to animatronics. From Quidditch sequences to the flying books in Hogwarts' library, green-screen technology played an essential part in bringing the magic of the "Harry Potter" universe to the big screen.

Not every special effect, however, was added post-production. Animatronics were used for creatures such as Professor Sprout's baby mandrakes and the "Monster Book of Monsters." There was also an animatronic Buckbeak used for close-up shots of the Hippogriff. The brooms were crafted from airplane-grade titanium.

"People think of them as a prop the kids are carrying around, but in reality, they have to sit on them. They have to be mounted onto motion-control bases for green-screen shots and special-effects shots, so they have to be very thin and incredibly durable," Eddie Newquist, chief creative officer of Global Entertainment Services - the firm responsible for The Harry Potter Exhibition – told Popular Mechanics.

Some of the food on set was real. 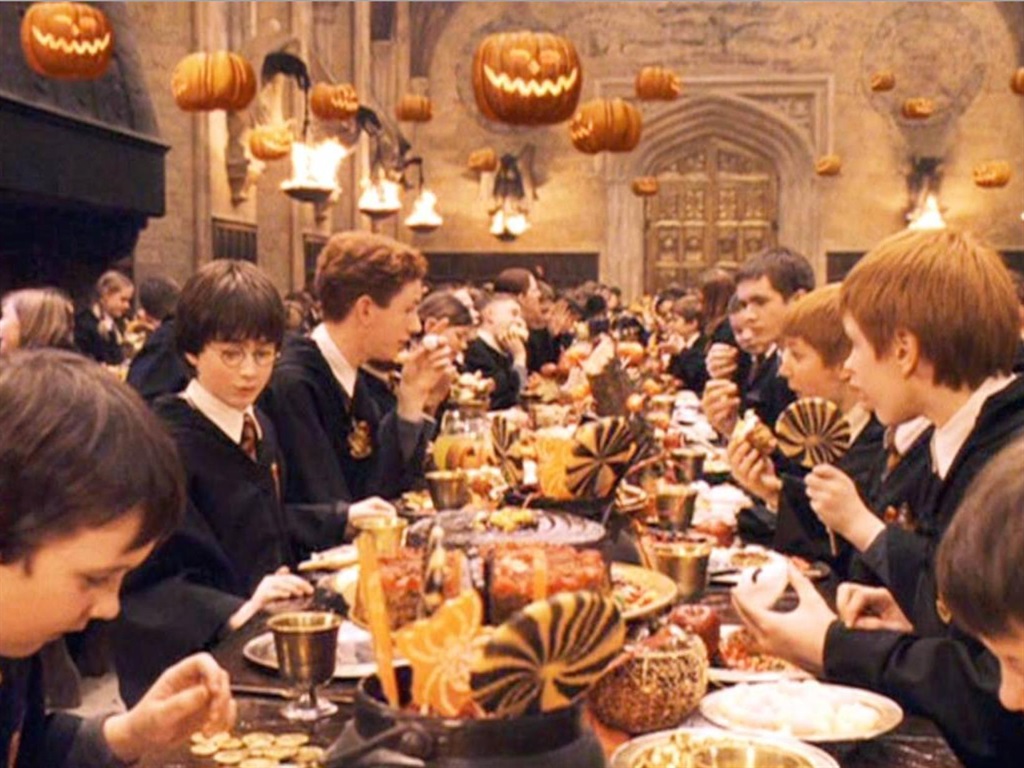 Although some of the food that appeared in the "Harry Potter" movies was made from painted resin, there were edible items in the mix for the feast scene in "Goblet of Fire."