30 of the wildest Guinness World Records set in 2019 Whether it's building the world's largest snow maze or solving a Rubik's cube while blindfolded, some attempts to set Guinness World Records require extensive planning and, depending on the task, large teams of participants.

Other world records, on the other hand, stem from outstanding accomplishments, like gymnast Simone Biles making history with her triple-double floor routine, or the outrageous moment when a photo of an egg broke a record by surpassing Kylie Jenner's millions of Instagram likes.

Keep reading to discover some of the most wild, outrageous, and amazing world records set in 2019.

The oldest married couple had a combined age of more than 210 years. They were married for more than 80 years. On May 17, Guinness World Records announced that Miyako Sonoda and Masao Matsumoto, a couple from Japan, were the oldest married couple with a combined age of 210 years and 121 days.

Masao Matsumoto passed away that day - he was 108 years old, according to Guinness World Records. His wife, Miyako Sonoda, was 101 years old the day Masao passed away. Masao and Miyako were married for 81 years.

At the US Gymnastics Championships in August, Team USA gymnast Simone Biles smashed two world records, adding to her list of Olympic medals and athletic achievements that have made her one of the world's most famous gymnasts.

Biles was the first person to nail the double-double dismount on the balance beam in competition. She also stuck the landing on the historic triple-double during her floor routine, a first for any female gymnast in competition.

A ring with 7,777 diamonds worth almost $5 million (roughly R75 million) set a record for having the most diamonds set in one ring. On August 14, Guinness World Records announced that a diamond ring made history with 7,777 diamonds. Guinness also checked to ensure the diamonds in the massive ring are conflict-free, meaning the stones have been mined and shipped in a way that's humane and fair, according to The Knot.

It took jewelers from Lakshikaa Jewels in Mumbai, India, 18 months to craft the record-shattering ring, which is worth $4.9 million (roughly R75 million). The stunning piece of jewelry was inspired by the Lotus Temple in Delhi, India, according to Guinness World Records.

As many as 1,347 women wearing wedding dresses set the world record for being the largest group of people dressed as brides. The event entailed 1,347 women from ages 18 to 92 who wore wedding dresses, and the group now holds a world record for having the largest gathering of people dressed as brides. According to Guinness World Records, there were single, divorced, and married women in the crowd. The event was organized by Sedka Novias, a bridal fashion store in Petrer, Spain.

Sculptors built the world's tallest sandcastle in Binz, Germany. It stands more than 57 feet above the ground, and it's made of 24,000 pounds of sand. The shockingly intricate sandcastle took a team of 12 sculptors and eight technicians from Russia, Poland, Hungary, Germany, Holland, and Latvia. The team spent three and a half weeks building the structure, which is made of approximately 24,250 pounds (11 metric tons) of sand. Guinness World Records announced the castle was a record-breaker on June 5.

As many as 633 Florida scuba divers broke a record for the world's largest ocean cleanup event. On June 15, 633 scuba-divers at Florida's Deerfield Beach participated in the world's largest ocean dive cleanup, according to a press release from Project AWARE, a nonprofit organization that supported the event. At the cleanup, 3200 lbs. of fishing gear was used, and divers removed more than 9,000 pieces of marine debris from the ocean. In honour of Pride Month, on June 19, Ripley's Believe It Or Not! and Madame Tussauds Attractions teamed up to create "Boa Boulevard," a 1.2-mile feather boa that stretched between 7th and 8th Avenue on 42nd Street in New York City.

A man in New Zealand set a record for diving 230 feet under ice while holding his breath for nearly two and a half minutes.

Freediver Anthony Williams from New Zealand achieved the deepest dive under ice as a male (with breath held) while wearing fins and a diving suit.

Williams made the record attempt in March 2019 when he dove into a frozen body of water in Kirkenes, Norway, and plunged 70.3 meters (230.643 feet) below the surface. Williams lasted 2 minutes and 29 seconds before coming up for air. 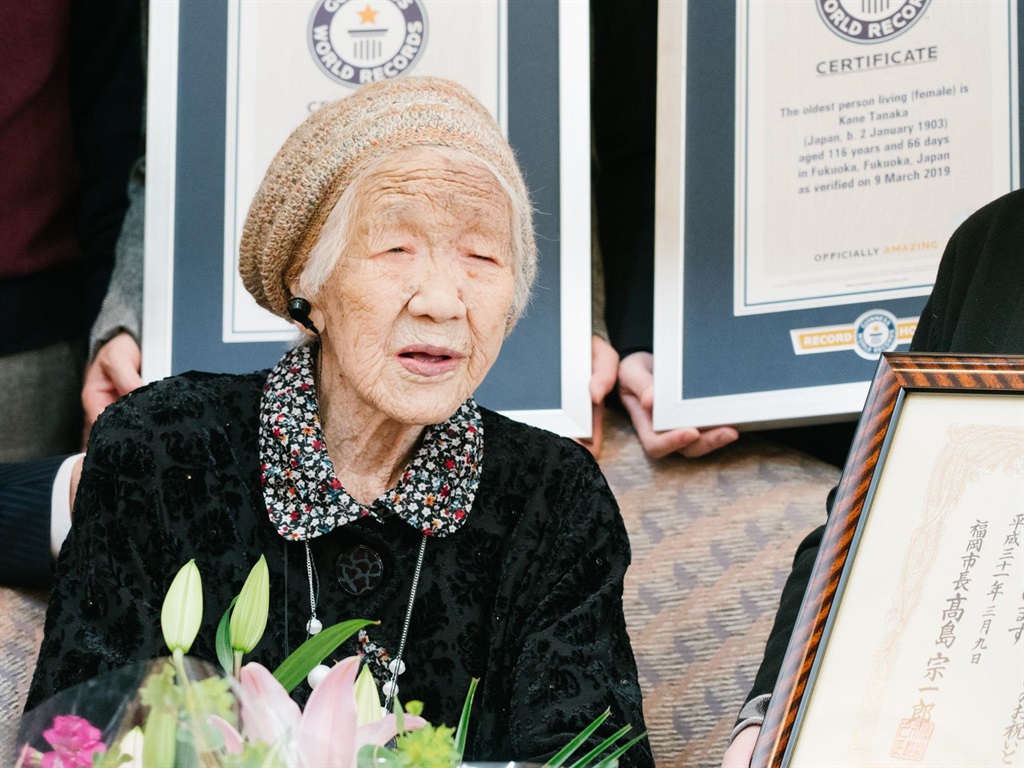 Kane Tanaka of Japan was confirmed as the world's oldest living person in March when she was 116 years, 66 days old on March 9. She was born in 1903, the same year the Wright brothers successfully put an airplane into flight.

A Canadian artist created the world's largest supported sculpture made from drinking straws. The stunning art installation in Ho Chi Minh City, Vietnam, used 168,037 straws and was 10-feet tall. The art piece was created to raise awareness about the dangers of single-use plastics.

This photo of an egg became the most-liked photo on Instagram, surpassing a previous record set by Kylie Jenner.

Let’s set a world record together and get the most liked post on Instagram. Beating the current world record held by Kylie Jenner (18 million)! We got this ?? #LikeTheEgg #EggSoldiers #EggGang

In January, a photo of an egg became the world's most-liked picture on Instagram with more than 30.5 million likes, surpassing Kylie Jenner's previous world-record photo of her daughter, Stormi, which had 18 million likes. The egg picture was posted on an Instagram account called @world_record_egg.

The fastest time to gain 1 million followers on Instagram was achieved by Prince Harry and Meghan Markle's Sussex Royal account. The @SussexRoyal Instagram account - made by Prince Harry, Duke of Sussex, and Meghan Markle, Duchess of Sussex - reached 1 million followers within a record-breaking five hours and 45 minutes of its creation on April 2.

Jonathan the tortoise has seen it all. Guinness World Records announced in February 2019 that Jonathan turns 187 years old this year, which makes him the oldest-known land animal alive.

He was born around 1832 and has lived through both World Wars, the completion of the Eiffel Tower, and the first powered flight, according to Guinness World Records.

A UK woman set the world record for having the largest feet of any living female. 45-year-old Julie Felton of the UK set a world record for having the largest feet of any living female. Felton's shoe size is a US men's 15.5, or 49.5 in Europe, according to Guinness World Records. The record was confirmed in April.

A barista made 420 cappuccinos in one hour, or seven every minute. Liza Thomas, a barista in Queensland, Australia, prepared 420 cappuccinos in one hour. Thomas followed Guinness World Records guidelines by using a coffee machine that was commercially available and that had a maximum of four espresso shots being prepared at one time. Thomas' world record was made public in April 2019.

An Australian man solved a Rubik's cube blindfolded in 16.22 seconds. Jack Cai of Australia set a record for the fastest time to solve a Rubik's Cube blindfolded with a time of 16.22 seconds on April 6. Cai broke the old record by 0.33 seconds, according to Guinness World Records. On April 5, 4,687 women from 130 villages in India joined hands and performed the world's largest simultaneous Konyak folk dance. The visually amazing, synchronized routine is documented in this YouTube video from Guinness World Records.

A competitive eater set a record for the fastest time to eat a burrito. Competitive eater Leah Shutkever from Birmingham, UK, finished a burrito in 44.20 seconds in May. In her YouTube video, Shutkever documents her record-breaking burrito experience.

An Australian chef made a pizza with 154 types of cheese, snagging a world record for the pizza with the most varieties of cheese.

Johnny Di Francesco, a chef at 400 Gradi restaurant in Melbourne, Australia, crafted a pizza made with 154 types of cheeses.

"The cheeses included the likes of gorgonzola, pecorino, Taleggio, aged cheddar, gouda and of course, many more!" Di Francessco was quoted in the Guinness World Records official news release. A man removed 70 socks from other people's feet in one minute while blindfolded.

On January 29, David Rush, an American, broke a Guinness World Record for removing 70 socks in one minute. Rush documented the event in a YouTube video where he's shown pulling socks off the feet of rows of people at a convention in Athens, Greece.

Chefs in Italy baked the world's longest tiramisu, which was almost 900 feet long. In March, a team of 30 pastry chefs and countless volunteers from the Galbani Santa Lucia cooking school in Milan, Italy, baked the world's longest tiramisu. The finished product was 897 feet and 3 inches (or 273.50 meters). After the attempt, the massive dessert was donated to a children's hospital, according to the Guinness World Records report.

A longhorn in Alabama broke two world records for its oversized horns. A Texas longhorn from Alabama named Poncho Via has massive horns that span 10 feet, 7.4 inches (or 323.74 centimeters). That's more than twice the width of a concert grand piano, according to Guinness World Records. In May, Poncho Via the longhorn broke two records: the largest horn spread on a living steer, and the largest horn on a steer (living or alive). 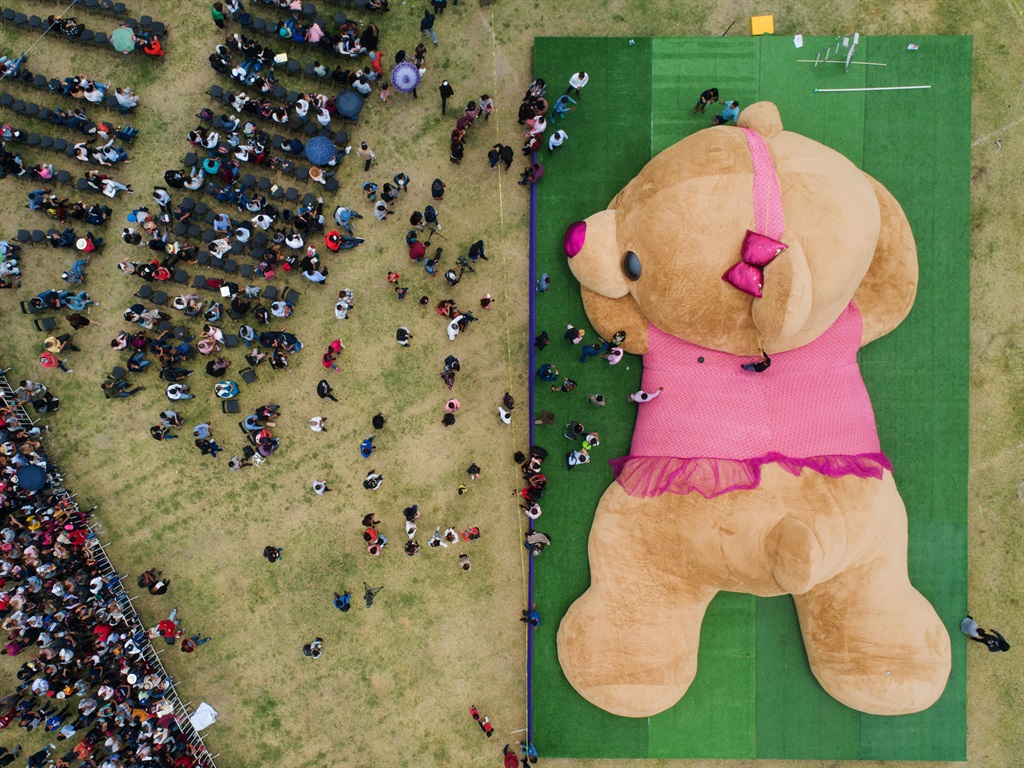 On April 28, the world's largest teddy bear was constructed by organizations in Xonacatlán, Mexico, in honour of the country's national day for children. The teddy bear is 63 feet, 8 inches long (19.41 meters) and weighs more than 4 tons, or 8,000 lbs. The world'slargest dim sum meal was served in February 2019 in Sydney, Australia, when 764 people indulged in dim sum from the Sydney Lunar Festival in honour of the Year of the Pig. Chefs from a local food truck cooked 3,100 individual pieces of pork, chicken, and vegetable dim sum.

More than 2,000 people set a record by linking arms while giving a toast. As many as 2,020 people linked arms while toasting in Haidong, Qinghai, China, on March 10. During the toast, the participants stood in the shape of a sunflower that symbolized their multicultural community.

Volunteers in India constructed the world's largest cupcake tower made out of 18,818 cupcakes. In January, after 42 hours of non-stop baking and icing, a team in India set a Guinness World Record for constructing the tallest cupcake tower at 41 feet, 8 inches high. The tower had 18,818 cupcakes, and all the cake batter was mixed using eight mixers. In Juliaca, Puno, Peru, on June 14, 1,048 alpacas were grouped together for the world's largest alpaca parade. The parade was celebrating the 58th anniversary of an agricultural organization called Feria de Ganadería y Agricultura del Sur.

The most accurate value of pi was calculated on Pi Day in 2019. Emma Haruka Iwao, who works as a developer for Google Cloud in Japan, calculated the most accurate value of pi: 31,415,926,535,897. Both Emma Haruka Iwao and Google LLC are credited with breaking this record, which was purposely attempted on Pi Day, or March 14.