The 20 hottest fashion brands in the world right now

Though "hot" is generally a subjective term, the e-commerce company Lyst consults a deep pool of data to inform its quarterly list of the hottest fashion brands in the world.

On Wednesday, Lyst - which currently sells more than 12,000 brands to fashion enthusiasts around the world - released its ranking of the 20 buzziest fashion brands for the second quarter of 2019. This quarter, Gucci, Off-White, and Balenciaga took the top spots, marking Gucci's fifth number one placement in two years. The report cites Gucci's involvement in influential cultural moments like the Met Gala, as well as a recent fashion show that made waves.

Read more: Millennials and teens are making Gucci cool again. Here's how the brand nearly doubled its sales in 2018.

"Gucci's impactful brand moments of the quarter included a politically charged Cruise collection featuring embellished uteruses and new campaigns with Harry Styles, which contributed to the global success of the label," the report states.

To determine the results, the company analyzes the shopping behaviors of its more than five million consumers, tracking searching, browsing, and purchasing patterns on its own platform. Lyst then integrates Google search data, conversion rates, and social media mentions of the specific brands to determine their ranking.

We took a closer look at the Lyst Index's analysis of the top 20 brands to see how they're carving a niche in the fashion world: In the second quarter, Balmain launched its first sneaker collection, hyping up the line with a pop-up store in London that let shoppers customize their own shoes. Other notable moments included creative director Olivier Rousteing transforming the Balmain spring/summer 2020 menswear fashion show into a full-on music festival. The Adidas x Yeezy Boost 350 v2 reflective shoes sold out within minutes, part of a partnership expected to bring in $1.3 billion in sales to close out the year. Additionally, Kanye West launched a new incubator program to support young designers.

Never one to shy from the quirky and evocative, Moschino debuted separate capsule collections in collaboration with The Sims and Playboy last quarter. Moschino also notably dressed Taylor Swift in her music video for "You Need To Calm Down." It was a big quarter for Moncler. In March, the French investment group Eurazeo sold its full 4.8% stake of Moncler, while Moncler subsequently announced its sales increased by 14% in the first quarter of the year. Originally a side project of Moncler art director Francesco Ragazzi, Palm Angels has grown into a fashion authority in its own right. In the second quarter of 2019, the skate-inspired label debuted a splashy collection with Under Armour. 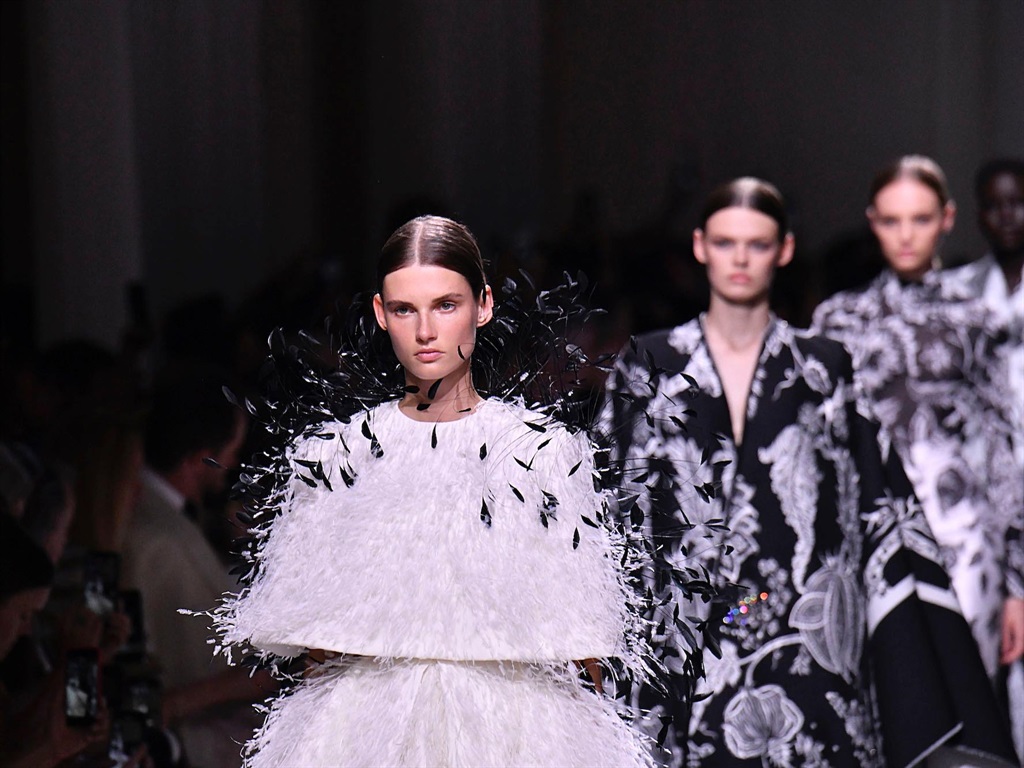 Givenchy had a significant celebrity boost last quarter, including tapping Ariana Grande as the newest face of the brand and dressing high-profile figures like Meghan Markle. The retailer also dropped a surprise sneaker collection with Onitsuka Tiger at its spring/summer 2020 fashion show. Dolce & Gabbana became the first luxury company to roll out extended sizing that runs up to size 20 in the US and 22 in the UK. It also released a popular new summer fragrance collection. Burberry announced a forthcoming period of transformation that involves closing 10 of its global stores, while at the same time making a pledge to reduce greenhouse gas emissions by 95% by 2022. Vetements continued to make headlines with its whimsical, tongue-in-cheek approach to fashion, including turning a Paris McDonald's into a catwalk. The French company also launched a new shoe with Reebok. Leading men Keanu Reeves and Finn Wolfhard of "Stranger Things" were tapped as the latest faces of Saint Laurent in the second quarter of 2019. At the same time, the company opened a new concept store in Paris and announced first-quarter sales went up 17.5%. Building off the hype of "Stranger Things" season 3, Nike teamed with Netflix on a collection themed around the show. The company also started using plus-size mannequins at its London flagship, prompting a heated debate on social media after a Guardian column decried the move as promoting unhealthy lifestyles. The Italian outerwear company that focuses on "research and technology applied to material" announced plans to open a new flagship store in Milan and make enhancements to its color-changing parka. Following the death of Chanel creative director Karl Lagerfeld - who started his design career at Fendi in the 1960s - the company held a memorial for the late fashion mogul. Fendi also launched two major capsule collections, one with British graffiti artist Pref and another with Luca Guadagnino, director of "Call Me By Your Name." Donatella Versace was nominated for a Lifetime Achievement Award at the World Fashion Awards in the same quarter that Serena Williams dazzled in a Versace creation at the Met Gala. The company also announced plans to double its annual sales. Prada made a major play for sustainability when it officially announced a ban on fur across the company, as well as plans to phase out nylon. In an attempt to revamp the brand, Prada made major improvements around customer experience and reported that annual revenue grew for the first time in four years. Valentino creative director Pierpaolo Piccioli continued to push limits and blend luxury and streetwear as part of his collaboration with Jun Takahashi of Undercover. Balenciaga made major strides by claiming its position as the fastest-growing brand in the couture and leather categories in April. It also debuted social initiatives like a program that provides two full scholarships to the Pratt Institute Black Alumni organization. The work of Off-White creative director and style icon Virgil Abloh continued to turn heads last quarter. Abloh lent a design eye to the custom-made Nike ensembles worn by Serena Williams at the French Open and also debuted his rug collection with IKEA. Gucci, a brand that has increasingly won the hearts of millennial and Gen Z consumers in recent years, demonstrated it continues to be a fashion powerhouse.

The company reported 20% revenue growth under creative director Alessandro Michele, who is widely credited with revitalizing the luxury retailer when he took the helm in 2015. Michele also served as co-chair for the Met Gala this year, while continuing to strive for innovation with a new technology that lets shoppers virtually try on shoes from the comfort of their homes.