Another fire has swept through the largest refugee camp in Europe, destroying what little was left from the first blaze A second fire tore through Europe's largest refugee camp on Wednesday, destroying what little was left behind in the overcrowded site after an earlier blaze forced thousands of people to flee.

The first blaze at Moria, on Greece's Lesbos island, began early on Wednesday morning. And another major fire broke out on Wednesday night, razing what had survived until that point.

About 12,500 people were living in the camp, Reuters reported. In the aftermath of the fire, two men walk amid the smoke inside the burned-out camp.
MANOLIS LAGOUTARIS/AFP via Getty Images

The camp was known for its poor living conditions, and had originally been designed to hold just 3,000 people. Most people lived in makeshift shacks and tents.

Authorities brought around 400 unaccompanied children and teenagers to the Greek mainland on chartered flights, according to Reuters. 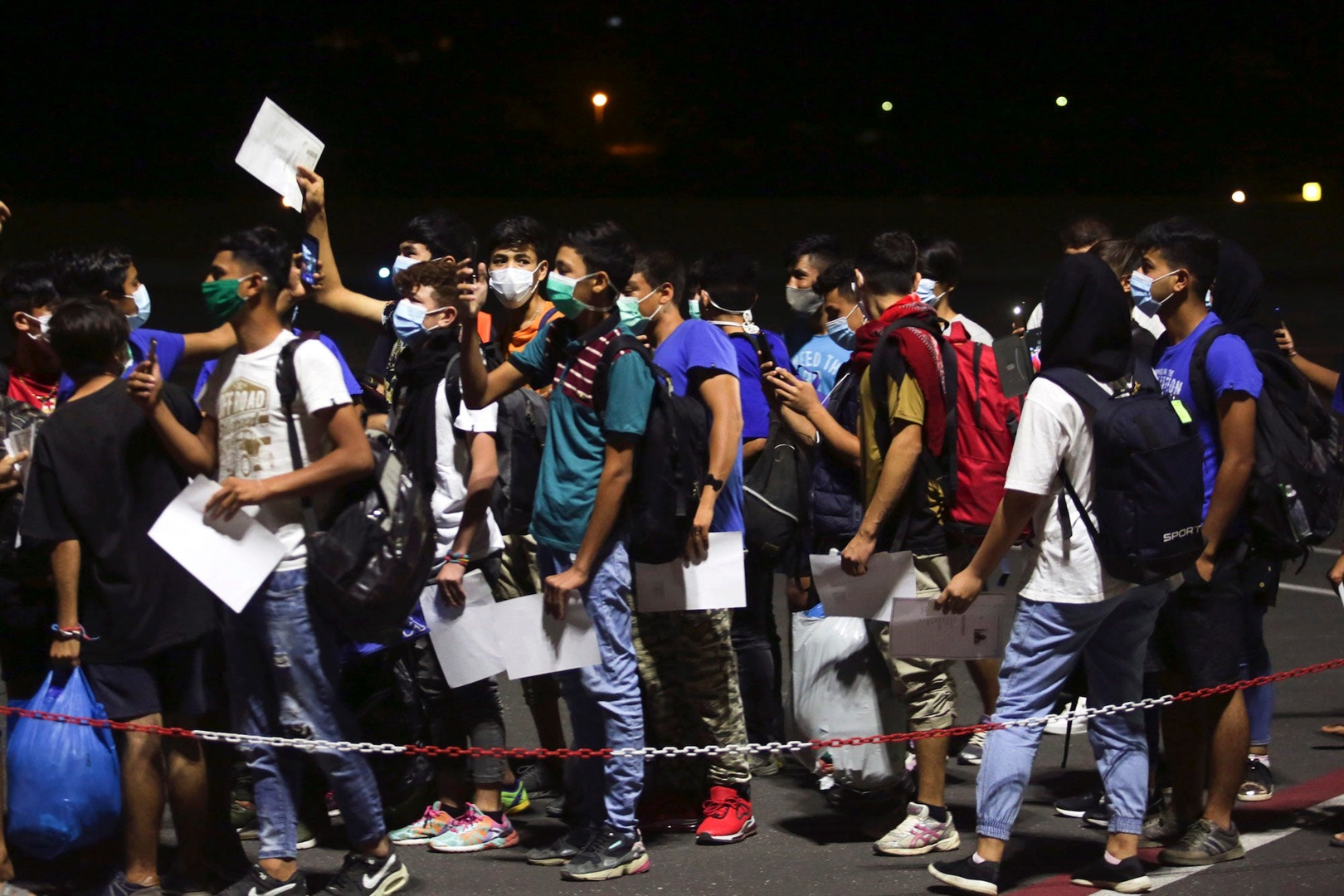 165 migrants of a group of 400 unaccompanied minors proceed to board a plane taking them to camps in northern Greece, after the fire that destroyed their camp.
Milos Bicanski/Getty Images One of the families affected by the fire.
Socrates Baltagiannis/picture alliance via Getty Images

But thousands more people remain with no shelter.

Reuters reported that families slept on the side of the road, in parking lots and in fields. Migrants rested as they spent the night on the road near Mytilene.
LOUISA GOULIAMAKI/AFP via Getty Images

Valencia, an eight-year-old girl from the Democratic Republic of the Congo, gestured to a Reuters reporter to ask for a biscuit because she was hungry.

"Our home burned, my shoes burned, we don't have food, no water," she said.

She and her mother, who has a newborn baby, slept on the side of the road, with her mother telling Reuters:  "There is no food, no milk for the baby."

Thanasis Voulgarakis, one of the camp's residents, told the BBC after the first fire that some parts of the camp had survived the first fire: "Now with the first light I can see that there is a few tents that make it, they are okay, but the rest of the camp, as I can see from this distance, is burnt out."

This is what the camp looked like before the first fire: A migrant buys food from a makeshift shop next to the Moria camp before the fire.
ANGELOS TZORTZINIS/AFP via Getty Images A man stands after back-to-back fires destroyed the Moria refugee camp on the Greek island of Lesbos.
Nicolas Economou/NurPhoto via Getty Images)

You can see more before and after photos from the first fire here.

But Reuters reported that the second fire destroyed what was left.

Police blocked to nearby towns to stop the migrants from entering, the BBC reported.

And it noted that reports have said that locals attacked and prevented the migrants from passing through a nearby town. A shot of the fires raging at Moria.
Byron Smith/Getty Images

Notis Mitarachi, Greece's immigration and asylum minister, said the fires "began with the asylum seekers", but did not elaborate on what he meant.

He said that the island being placed under quarantine last week over coronavirus cases had been a factor. Authorities said that some people who tested positive refused to isolate themselves.

But, the BBC noted, he did not say that the fires were started deliberately to destroy the camp.

And some migrants at the camp told BBC Persian that "far-right Greeks" were to blame. They said Greeks were acting after coronavirus cases were reported at the camp, and the migrants took photos of what they said were canisters used to ignite the flames.

The camp has long used by critics as a symbol of what they say is Europe's failure to deal with refugees and asylum seekers.

Dunja Mijatovic, the Council of Europe Commissioner for Human Rights, said that other camps in Europe have similar conditions, and said that the fires exposes Europe's poor system for dealing with migration "which has led to the overcrowded, inhumane and completely unsustainable situation in Moria and elsewhere on the Aegean islands," Euronews reported. And Adriana Tidona, Amnesty International's migration researcher, said that "reckless EU policies" were to blame for the camp's overcrowding, according to Euronews.

"As the EU Pact on Migration and Asylum is finalized, this is a timely indictment of the current policy of camps and containment," she said.

Council of Europe Commissioner for Human Rights Dunja Mijatovic noted similarly overcrowded conditions on other Greek islands and said the situation could degenerate there too. Asylum seekers sleep by the roadside near the camp.
Socrates Baltagiannis/picture alliance via Getty Images

An international agreement means migrants who arrive through Turkey are kept on Greek islands while their application to continue into the rest of Europe is processed.

But many end up trapped there for years. The Médecins Sans Frontières/Doctors Without Borders charity, which works with migrants in Greece, says that "migrants and refugees previously in transit through the Greek islands have been trapped there for an indeterminate time in overcrowded, unsafe and unhygienic conditions, without access to basic services, adequate shelter or information on their legal status." A man walks carrying a plastic bag on his shoulder.
MANOLIS LAGOUTARIS/AFP via Getty Images

Germany claimed its support for Greece and migrants after the fire, with Foreign Minister Heiko Maas saying "We will not leave Greece alone with this situation -- and above all -- we will not leave the people in this camp alone," according to Euronews.

He said "We have already offered the Greek government support," and said that Germany would make it an issue while it holds the presidency of the EU.

Demonstrations have also been held in German cities like Frankfurt and Cologne, calling for better EU migration policies and for Germany to take more refugees. People demonstrate on the Römerberg in Frankfurt against the refugee policy of the EU and for the reception of the refugees in Germany after fires at Greece's Moria camp.
Boris Roessler/picture alliance via Getty Images

Greece was already under fire for its treatment of migrants. A New York Times report in August claimed the government had started a process of bringing refugees to the edge of Greek waters and "abandoning them in inflatable and sometimes overburdened life rafts."

It reported that Greece had abandoned more than 1,000 migrants in the sea this way.

To donate to a relief fund for the refugees, go to the web site for Médecins Sans Frontiers.