Google walkout: workers around the world leave their desks in protest over sexual misconduct The Google offices in Granary Square, London where some members of staff staged a walkout as a part of a protest over the company's treatment of women. (Photo by Stefan Rousseau/PA Images via Getty Images)

Google staff around the world are staging a mass walkout on Thursday in protest at sexual misconduct.

It follows a bombshell New York Times report last week, which named executives who had been accused of sexual misconduct, including Android creator Andy Rubin. Rubin denies the allegations.

Thousands of staff are expected to take part in the protest, which will involve people walking away from their desk at 11 a.m. at Google offices around the globe. They are using the hashtag #GoogleWalkout. Employees in London, Tokyo, and Berlin are among those to have taken part.

Business Insider will be covering the Google walkout live. Refresh this page for updates. Google staff in Singapore were among the first to observe the walkout.

As 11 a.m. rolled around in Europe, other Google offices took part. This picture was posted from Zürich, Switzerland, by software engineer Danila Sinopalnikov. Here's the Zürich crowd from another angle. 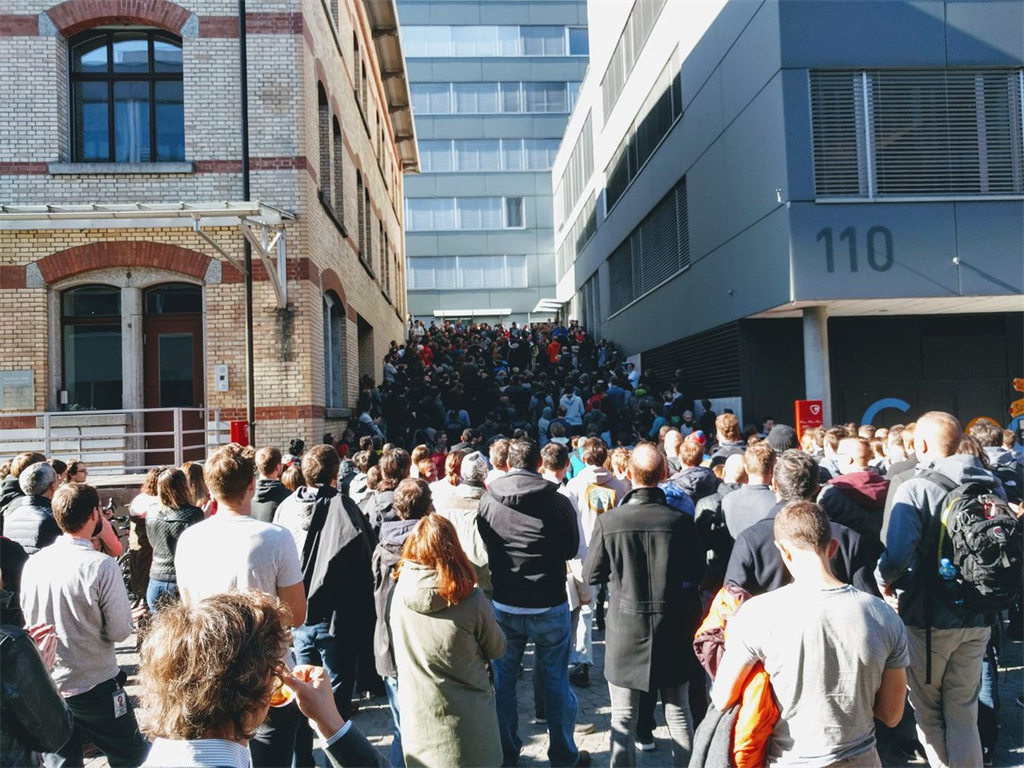 One protester brought a megaphone to the walkout. Another decided to come as a stormtrooper. The placard read: "I work on a Death Star but even I know not to sexually assault people." Berlin Googlers stood in front of the iconic Brandenburg Gate. The rain kept some Londoners indoors, but that did not stop them from making their feelings known. Business Insider reporter Shona Ghosh was at Google's St Giles Street offices. An employee taking part in the walkout told her: "I'm proud that we're now supporting everyone, and hopefully now gives them a voice which most seem to feel they have not had before."

She was told that staff at the Victoria office had a talk about the issues they're raising with management, including a call for a transparency report on sexual harassment.

A Googler from London's Camden office said stories shared during the walkout were "heartbreaking," and shared this picture. Google employees in Dublin, Ireland, also showed their solidarity for the cause. RTE journalist Will Goodbody posted this video:

Google employees in Dublin starting their walkout in protest at the recent revelations about the treatment of women in the company. pic.twitter.com/E2FRV5hYtQ

There was soon a huge crowd. Here are Tokyo Googlers at the beginning their walkout. In Haifa, Israel, Google has a small office of less than 100 people, but that didn't stop them from standing with Googlers worldwide. We, Google employees and contractors, will walkout on November 1 at 11:10am to demand these five real changes. #googlewalkout pic.twitter.com/amgTxK3IYw

Organizers are demanding more transparency from Google around its handling of sexual harassment and pay and opportunity inequity, as well as more employee empowerment overall (for example, having an employee representative join the company's board). In their words: pic.twitter.com/eKmLnhSp4f Getty/Justin Sullivan
Google CEO Sundar Pichai told Business Insider in a statement that management supports the protest: "We let Googlers know that we are aware of the activities planned for Thursday and that employees will have the support they need if they wish to participate," he said. But Google engineer Liz Fong-Jones encouraged the press to shift their focus away from Pichai's support.

All of the headlines that start with "Google CEO supports..." are focusing on the wrong thing.

What matters today is workers' voices and demands.

It doesn't matter whether management claims to support; the real test will be whether the demands are met. #GoogleWalkout — Liz Fong-Jones (@lizthegrey) November 1, 2018