The self-improvement strategy the CEO of internet firm GoDaddy uses to find success at work, life

May Teng , Business Insider US That insight, which comes from David Cotrell's book "Monday Morning Leadership," is one of GoDaddy CEO Aman Bhutani's fundamental leadership principles. The web services company has added more than a million customers in 2020 and over 400,000 in the third quarter of 2020 alone, serving users in over 100 countries across the globe.

Bhutani, who previously worked as a senior vice president at JPMorgan Chase and President of Expedia Group, began helming the company in Sept. 2019. Since then, the company has experienced explosive growth to digital entrepreneurship and a boon to GoDaddy's platform.

"We're in the fortunate position of riding the digitization wave," Bhutani told Insider. "But even our company faced a significant number of challenges as the pandemic hit."

Those challenges ranged from everything from ensuring GoDaddy's China team was able to continue operating safely, to addressing the rapidly evolving needs of the company's customer base, which largely involves small business owners who use GoDaddy to build online platforms.

But when faced with tough decisions, Bhutani returns to his principle of self-improvement - and it's helped him to be decisive and navigate change.

"That principle has helped me through the most difficult of decisions," he said.

It can be hard to know how to infuse personal growth into business. Here's how Bhutani has used self improvement to better himself and his company.

Create a competition with yourself

Bhutani looks at self-improvement as a constant competition with himself. He advises other aspiring leaders to do the same.

"Compete with the person you know best - the person you were yesterday," Bhutani told Insider. "You have all the cards; you know every secret about that person. You just need to improve one tiny thing every day." 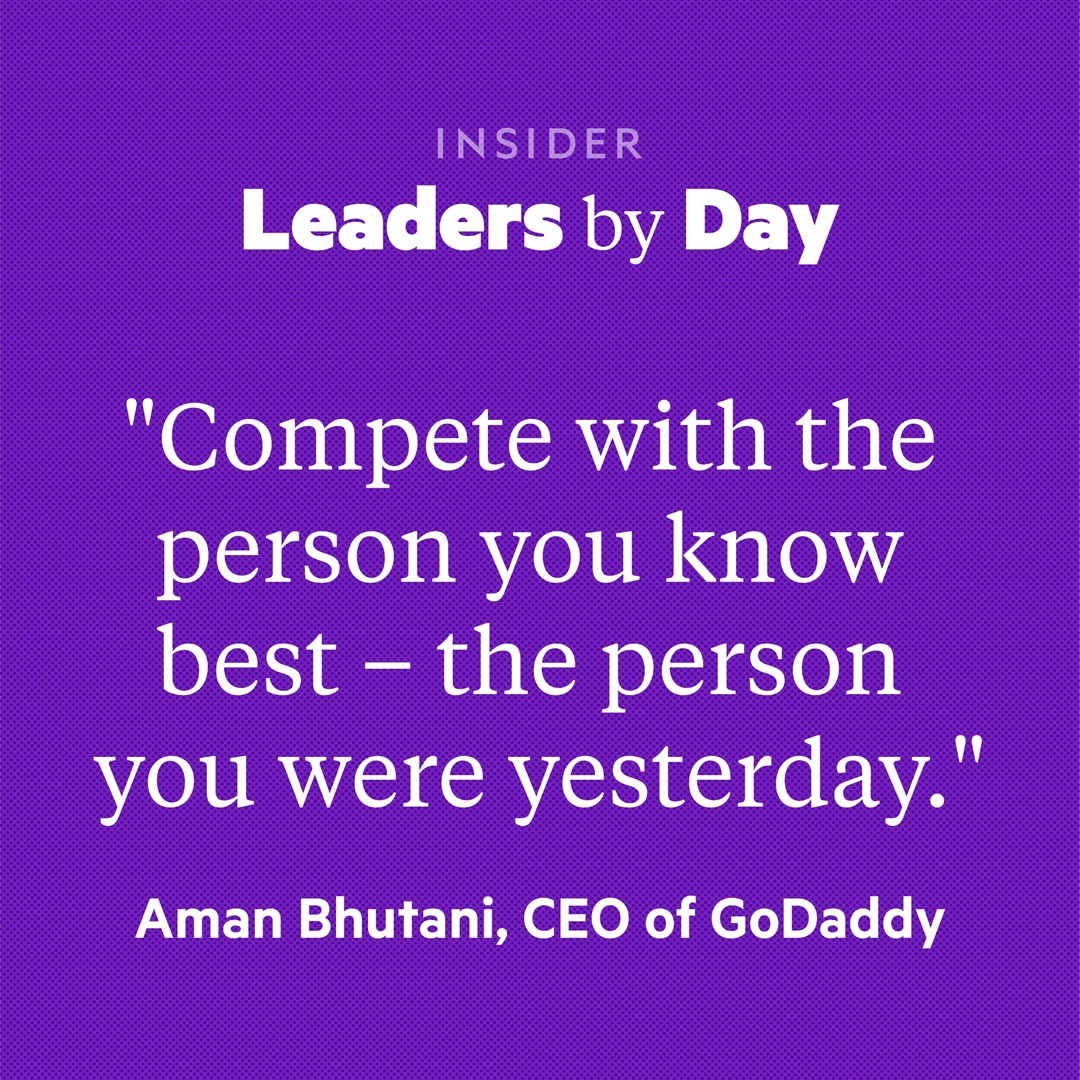 Insider
Research shows that effective leadership is built on self-awareness. And by constantly evaluating the ways you can do better and setting up competition with yourself, you're also exercising self awareness.

It doesn't have to be a dramatic change; you don't have to become a perfect orator overnight if you struggle with public speaking, for example. The key, Bhutani said, is learning to improve at one small thing consistently.

"If you can be 0.1% better every day, you will be twice as good, very quickly," Bhutani said. "And that type of personal growth makes you unstoppable."

If you struggle with follow-through, your path to self-improvement might benefit from keeping a list or spreadsheet.

Early in his career, Bhutani did just that. He would write down points of improvement on an excel sheet and track them. Over time, as the practice became more natural, Bhutani dropped the spreadsheet.

"Now, a quick reflection from a humble lens gives me a couple of items every day that I can improve next time," Bhutani said.

Updating a spreadsheet to keep track of goals and points of improvement is a practice used by many leaders. Georgia politician Stacey Abrams, for example, has been known to follow that same practice to ground herself in her ambitions.

Listen closely to others

It's difficult to find ways to improve if you're closed off to the feedback of others. That's why Bhutani makes a point to listen closely to what his employees have to say, and to pick up on what they're communicating through smaller, non-verbal cues.

"Even if they don't say it, whether they're quiet or looking away, people are giving you feedback all the time," Bhutani said. "It might be small, but they're giving you that feedback."

GoDaddy hosts regular town halls with up to 2,500 participants. According to Bhutani, that's a crucial opportunity for him and his executive team to listen to their concerns and readjust accordingly.

"The things they ask about, the questions they've bid up - that's all feedback we're getting," Bhutani said.

He's also careful not to fall into the trap of confirmation bias, where people can specifically look for opinions that support their own. Instead, Bhutani said it's important to examine multiple sides to every issue.

"The pressure between two opposite ideas can help you think about things in a better way," he said.