In 2017, the game to play was "The Legend of Zelda: Breath of the Wild" — a sweeping epic that set a standard for the entire year.

In 2018, that game is the new "God of War" — an incredible, similarly epic journey that I just spent two weeks playing more or less non-stop. It's hard to overstate how impressive "God of War" is. It is the high water mark of 2018 thus far — the game by which all others will be measured. Whether you've played games in the series before or not is unimportant. Even if you've outright disliked previous "God of War" games, there's something here for you.

Simply put: If you own a PlayStation 4, "God of War" is a must-own, must-play game.

A quick summary of the "God of War" series: The "God of War" series goes way back to the PlayStation 2.

Players controlled Kratos, the God of War himself, as he struggled with the Greek pantheon. His struggle was often told through fighting off hordes of monsters (based in Greek mythology), often in small arenas — you enter an area, the exits are sealed, and you must fight your way through groups of enemies until they're all dead and you can progress.

The games focused on stylish, third-person, action-adventure gameplay. There was some light puzzle solving, and the occasional cutscene involving Kratos getting super mad at how the Gods had played him once again, and some pretty massive boss fights where you literally climbed up giants (and sometimes became giant yourself). It was fun, if a bit overdramatic and silly at times.

The last game in the previous series was "God of War: Ascension" back in 2013 on the PlayStation 3.

The new game — simply named "God of War," like the original — is a reboot. On paper, the "God of War" reboot is very similar to the original series: It's a third-person, action-adventure game that's focused on stylish combat.

But in reality, there are some huge changes right off the bat. For one, Kratos now has a son that he's taking care of (seen above). His name is Atreus (uh-tray-us), and he's with you for the entire journey.

And the journey, rather than a tale of revenge, is one of grief: Kratos' wife / Atreus' mother has died, and her last request was to have her ashes released at the tallest peak in the land. It's a subtle re-focus that, unbelievably, turns Kratos into a complex, interesting character for the first time ever.

How he handles grieving while teaching his son valuable lessons — all while dealing with the tremendous psychological baggage from his previous life as a Greek god — is what elevates "God of War" from an impressive, gorgeous action game to a memorable, meaningful game. All other games could take a page (or fifty) from the subtlety of dialog and voice acting and storytelling in the new "God of War."

Kratos conveys more emotion with the occasional gruff affirmation than most game characters do with hours of exposition.

The first thing I was struck by is how incredibly gorgeous it is. Outside of racing games, "God of War" is likely the best looking game on the PlayStation 4. Every image in this review was captured on my personal PlayStation 4 Pro from a retail version of "God of War."

It really looks this good: 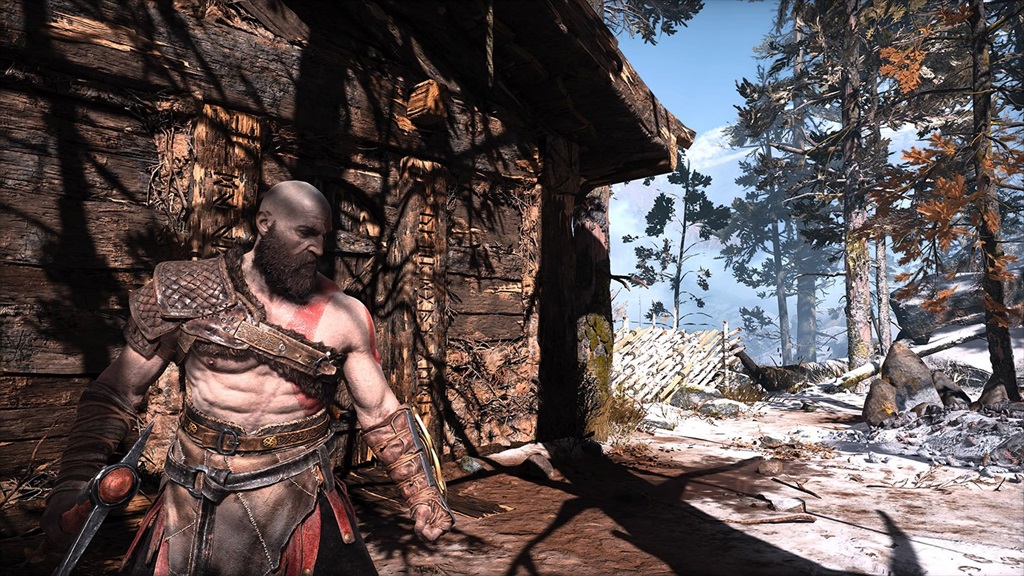 Kratos looks at the ashes of his dead wife.
Sony

Between the level of detail in everything, the incredibly impressive shadow work, and the fact that the game runs smoothly 99% of the time, "God of War" is a technical triumph.

Games rarely look this good, and they rarely run as smoothly as "God of War" does when they are this attractive. It's clear that Sony is pushing the PlayStation 4 to its limits with "God of War" — my PlayStation 4 Pro's fans were screaming the entire time I played the game.

Good news: It was worth it, as there are countless moments while playing "God of War" where I stopped to take in the incredible world that Sony's Santa Monica Studio built.

"God of War" is smart. Right from the first fight, "God of War" forces you to fight intelligently rather than just jamming on buttons. One of many triptychs found throughout the game, depicting a story of Norse mythos.
Sony

"God of War" is known for its combat. Kratos and his "Blades of Chaos" were the star of the show in the past, and that's something that hasn't changed much: The main thing you do in "God of War" is fight.

What has changed is what Kratos fights with: He now wields a magical axe instead of his traditional chain-blades, which he can throw (and summon) as he wishes.

The new main weapon results in balletic, almost rhythmic combat: Throw the axe at the enemy charging at you, summon it back and start charging a major swing to take out the next foe before dodging out of the way, adding in a few flourishes of the axe, then finishing off the bad guys with another sturdy toss. By 10 hours in, I was dancing around enemies and strategically taking them out in packs. And that's when the game started changing up enemy types so that I was forced to change up how I took them out. That happened several more times before I'd seen credits roll.

In many ways, the combat in the new "God of War" feels more "Dark Souls"/"Bloodborne" than "God of War." It's not quite as demanding as those games, but the stakes are definitely high. I was still getting killed by relatively standard enemies late in the game, and it was always my fault. Why didn't I roll out of the way of that unblockable attack? Why didn't I parry to stop the flurry of attacks before they took me out?

"God of War" demands that you play it smart — a welcome move in an era of cynical, lowest-common denominator media.

The game's story is actually interesting, and the game's characters are actually characters. The entire "God of War" series before this reboot focused on Kratos getting revenge — revenge for being duped by the Greek god of war, Ares, into killing his own family. It was the lengthy tale of a man out for justice, finding none, and getting mad as hell anyway.

In short, Kratos was largely a one-note character for much of his existence — the personification of anger and vengeance. To say he "grows" as a character in the new "God of War" would so vastly undersell this game that it's insulting. For the first time ever, Kratos is a fully fleshed-out character in "God of War." He's reckoning with the death of his wife, with his past, with raising a son on his own, and with the general concept of not being a vengeful nutcase. He's keeping a stiff upper lip while attempting to teach his son about the world — a world that's seemingly full of stuff that's trying to kill them both.

In the same way that "The Last of Us" was foundationally structured around Joel and Ellie growing closer through adversity, such is "God of War." If you're a parent, you may cry. If not, you may still cry anyway. It's a shockingly moving tale!

The world of "God of War" — a Norse mythology-based Midgard — is appropriately epic and mysterious. I'm holding back a lot of information here as a means of not ruining the game — there are a ton of surprises that are simply much more fun to discover on your own. Even just seeing the vast expanse of Midgard's massive Lake of Nine is worth experiencing for yourself.

In general, it's this sense of mystery — and the ability to explore that mystery — that makes "God of War" such an excellent game. There are entire areas that are optional, full of side quests that would make most games' main quests look thin. There are countless baubles to pick up which offer in-game enhancements, and loads of optional, extremely difficult fights to pick. After dozens of hours with the game, having completed the main story, I still have tons of stuff to do in Midgard. There are whole areas I've yet to find. In short, Midgard feels like a living world — albeit a living fantasy world full of stuff that wants to kill me.

You could just do the main story, focusing on main story quests and skipping all the optional stuff. But that'd be tremendously silly — though the urgency of the main quest is certainly a propellant, going on adventures with your son is just as (if not more) rewarding.

Don't worry: Atreus is a massive help to Kratos, not a companion that gets in the way. Kratos is Kratos, but Atreus is just a little kid — and the extremely violent fights in "God of War," one would think, are no place for a little kid.

And for the first few hours of the game, that's basically how it goes — Kratos fights while Atreus shoots the occasional arrow from the sidelines. He doesn't need to be revived, or babysat in general; he takes care of himself. Most importantly: Atreus grows tremendously as a fighter throughout the journey. By the game's end, Atreus is a crucial part of every fight — a budding warrior in his own right. That journey, from little kid to seasoned veteran, is a major part of what makes "God of War" such an excellent game.

It's growth that feels natural, removed from the video game tropes of "power-ups" or whatever other nonsense that excuses away real character growth in most games.