Activists gathered at Trafalgar Square in the UK on May 31, 2020 to protest the death George Floyd in Minneapolis.
David Cliff/SOPA Images/LightRocket via Getty Images

George Floyd spent the last few moments of his life on Monday lying on the ground, handcuffed, with his neck pinned under the knee of a white Minneapolis police officer who ordered him to "relax" as the 46-year-old black man gasped, "Please, I can't breathe."

Anger over Floyd's death has bubbled over into protests across the United States calling for an end to police brutality and injustice - and now those demonstrations have gone global.

In the United Kingdom, hundreds of demonstrators reported at Trafalgar Square in London, with people kneeling in solidarity at 1 p.m. Sunday local time. This despite mass gatherings being prohibited in the country as part of its coronavirus response.

People were seen carrying signs that read, "Justice for George Floyd," "Racism has no place," "Enough is enough," and "Black lives matter." They chanted, "I can't breathe" and "No justice, no peace," and marched to Grenfell Tower, which was felled by a fire in 2017, causing 72 deaths.

Protesters also walked to the US Embassy in Battersea, BBC reported, and were seen in Manchester and Cardiff. In Germany, the scene was a familiar one.

A crowd gathered at the US Embassy in Berlin on Saturday. Graffiti artists also sprayed Floyd's image on a stretch of the wall that divided the German capital city for decades during the Cold War.

The next day, crowds demanded justice in front of the Brandenburg Gate. "Justice can't wait," "Black futures matter," "Suffocate the racists," and "We are all the same and equal," their signs read.

Meanwhile, in France, Floyd's death prompted the family of Adama Traoré to call for protests. The 24-year-old black man was tackled and subdued by police officers and gasped "I can't breathe" before he died, according to The New York Times.

The advocacy group La Vérité Pour Adama - which in English means "The truth for Adama" - wrote on Facebook: "How can you not think of Adama's terrible suffering, who had 3 police on him and told them 'I can't breathe.' ... His name was George Floyd, just like Adama, dead because they were BLACK!" Thousands of people gathered in front of the US Embassy in Berlin, Germany, following the death of George Floyd.
Abdulhamid Hosbas/Anadolu Agency via Getty Images

In Italy, protesters made their way over to the US Embassy in Milan, with signs that declared, "Stop killing black people," "Say his name," and "We will not be silent."

Photos from the scene show people kneeling and standing with their hands squeezing their necks and "I can't breathe" written on their face masks. 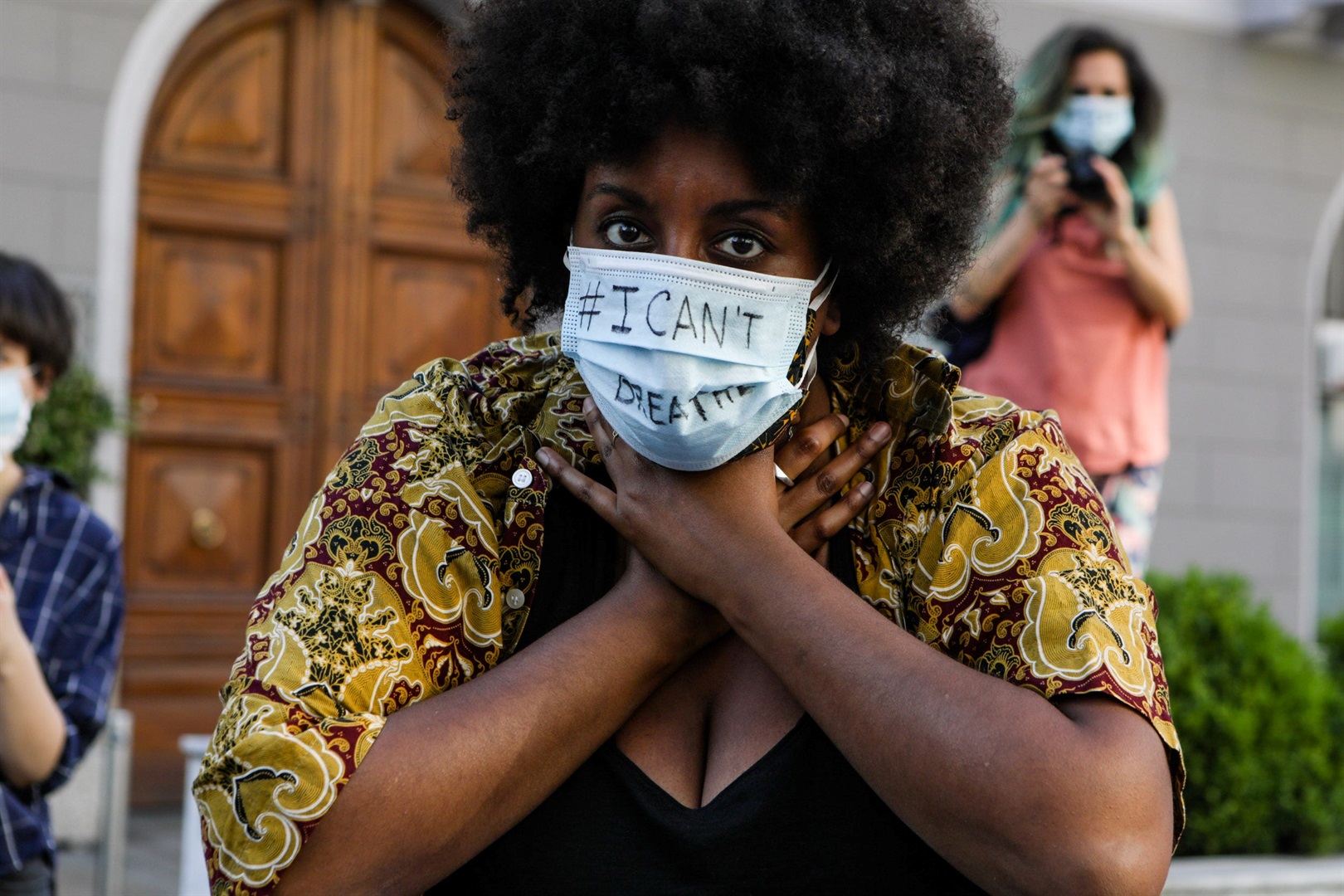 Protests at the US consulate in Milan, Italy, to protest the death of George Floyd.
Mairo Cinquetti/NurPhoto via Getty Images

And in Ireland, around 100 people demonstrated outside the US Embassy in Dublin, while a peaceful protest was also organised at the residence of the US ambassador in Phoenix Park, according to RTÉ News.

Thousands in Copenhagen also flooded the streets on Sunday to march peacefully and raise awareness ab0ut police brutality. They walked from the US Embassy to the Danish Parliament building, where they took a knee in solidarity with other Black Lives Matter and Floyd protesters.

The goal, some wrote on Twitter, was to apply international pressure on governments to treat citizens equally and better.

A massive crowd filled Dam Square in Amsterdam with demonstrators showing their support for their American counterparts. Their signs read, "Love black lives the way you love black culture," "Racism is a pandemic," "My skin ain't a crime," "Police violence is not an accident," and "Who do we call when cops kill?"

Naomie Pieter of #kozp advocates for all black lives. Speaking of Tony McDade and other trans people who donâ€™t get much attention #BlackLivesMatterNL pic.twitter.com/8IzsWy1GAu— Clareesi (@ClariceGargard) June 1, 2020

Closer to home, in Canada, protests were also sparked by the death of Regis Korchinski-Paquet, a 29-year-old black woman, who fell from her balcony and died on Wednesday as police were investigating a domestic incident at her building, CBC News reported.

Demonstrations in Toronto on Saturday in honour of Korchinski-Paquet dovetailed with calls to end racism around the world, according to Vox.

Canadian Prime Minister Justin Trudeau told reporters on Friday that Canadians ar watching the events that are unfolding in the US "with shock and with horror," the Guardian reported.

"Anti-black racism - racism - is real," he added. "It's in the United States but it's also in Canada and we know people are facing systemic discrimination, unconscious bias, and anti-black racism every single day." People in New Zealand on Monday joined the chorus of criticism reverberating around the US.

Images show people kneeling in solidarity with their fists raised in the air, while a haka - a ceremonial Maori dance - was also performed.

RTE News reported that another 500 gathered in Christchurch and around the same number of people held a vigil at the Parliament building in Wellington. Protests are expected later this week in Australia.

An Aboriginal man, David Dungay, said "I can't breathe" 12 times while being restrained by prison guards in 2015. He died, and the video of Floyd's killing has been traumatic for his family, The Times reported.

Social unrest in the US has prompted Australians to highlight the fact that 400-plus Indigenous Australians have died in police custody since 1991. None of the police officers have faced consequences for their conduct, per The Times.

However, Prime Minister Scott Morrison said during a radio interview on Monday that "there's no need to import things happening in other countries here to Australia."

People shut down his comments immediately.

Scott Morrison telling Australians not to â€˜importâ€™ a movement from the US proves how tone deaf he is. Our country is built on genocide and violence, just like the US. You canâ€™t import something when itâ€™s been here the whole time— Gabs is staying home?? (@Gxbriellemxry) June 1, 2020

China had a slightly different reaction to the protests in the US. The Times reported that Floyd's death and the resulting riots were featured prominently on state-run news outlets and the social media platform Weibo. After President Donald Trump was rushed to a bunker in the White House as protests in Washington, DC, intensified, "BunkerBoy" was trending on Chinese social media platforms.

Hu Xijin, the editor-in-chief of nationalist publication Global Times, wrote on Saturday: "Mr. President, don't go hide behind the Secret Service. Go to talk to the demonstrators seriously. Negotiate with them, just like you urged Beijing to talk to Hong Kong rioters."

And, on Sunday, China's foreign ministry spokeswoman, Hua Chunying shared "I can't breathe" on Twitter. Attached was a screenshot of Morgan Ortagus, a spokesperson for the US Department of State, condemning the Chinese Communist Party for cracking down on Hong Kong.

Javad Zarif, the foreign minister, posted to Twitter an edited screenshot of a 2018 statement by American officials criticising the country's "tactics of suppression, imprisonment of protesters, and the denial of Iranians' frustrations." The references to Iran were crossed out in red and replaced with America.

To those of us who do: it is long overdue for the entire world to wage war against racism.