Germany says it's ready to stop buying Russian oil, paving the way for EU to impose a full embargo 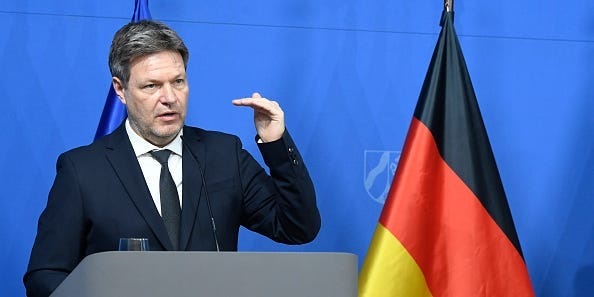 German officials said the nation is now prepared to stop buying Russian oil, the Wall Street Journal reported, opening the door for the European Union to impose a fresh set of sanctions on Moscow.

In a Wednesday meeting, German representatives said they would pull back their prior objections to a full Russian oil embargo, as long as Berlin would have time to find alternatives to Russian supplies.

The pivot from Germany follows a new deal with Poland that will allow it to import oil from other global suppliers through Gdansk, a Polish port in the Baltic Sea, government officials announced on Wednesday.

The infrastructure of this port allows for a direct replacement of Russian supplies as it connects to the PCK oil refinery in Schwedt, Germany, they said. Enabling alternative oil imports to reach Schwedt was a key piece to Germany lifting its opposition to an embargo.

Germany has already slashed its intake from Russia, which now accounts for 12% of Germany's oil consumption, down from 35% before Vladimir Putin launched his war on Ukraine, Germany Economic Minister Robert Habeck had said this week.

A full EU embargo on Russian oil could signal further escalation in the economic conflict unfolding between the Western world and Moscow, which have used energy markets to try to punish each other.

The EU has already announced a ban on Russian coal and sanctioned various sectors of the Russian energy industry. But oil and gas has continued to flow, and Moscow has retaliated by demanding payments in roubles.

On Wednesday, Russia cut off natural gas supplies to Bulgaria and Poland after the two countries refused to pay in roubles.

But the Financial Times reported on Thursday that Germany is among four nations preparing to pay for Russian gas in roubles, despite warnings from the EU about breaking sanctions. Still, Russia declined Germany's rouble payment earlier this week for some April and May gas deliveries.