A German fugitive who escaped to Thailand has been arrested after footage of him selling street food went viral, and immigration officials running routine checks discovered that he was wanted on charges of drug trafficking, robbery, and child pornography.

Photos of Maximilian Fernsebner, 34, helping his wife sell grilled chicken sticks from a stall earlier this year in front of a housing estate in eastern Thailand were posted online in mid-May, the Bangkok Post reported.

The photos went viral after his wife, 26-year-old Thai national Pawanee Sricheai, told local media that they had been helping mind her mother's stall while she was sick.

The photos prompted immigration chiefs to run a routine check on him, according to Germany's DPA news agency and Hong Kong-founded news site Coconuts news, which has a bureau in Bangkok.

"After the pictures blew up, many news publications started calling us for the name of the German. Since we didn't know who he was either, we sent pictures to the German embassy," a Thai immigration police bureau official Chatchawan Thippichai told Coconuts. German fugitive Maximilian Fernsebner went viral after a local Thai news site published footage of him helping his wife sell grilled chicken in a roadside stall in May.
Viral Press/YouTube

Authorities then found that Fernsebner had entered Thailand illegally because his last immigration record with the country had been when he left Thailand for Laos in October 2017, DPA and the Bangkok Post reported.

He returned to Thailand illegally later that year, Coconuts reported.

Upon further investigation, immigration officials found that Fernsebner had been wanted on an Interpol red notice, a form of international arrest warrant, since 2017.

Fersebner was suspected of selling illicit drugs online, involvement in theft, and possession and distribution of child pornography, the Bangkok Post reported.

Thai officials had not known about the Interpol notice because it was issued after he legally entered the country that year, DPA reported, citing immigration police chief Lt. Gen. Sompong Chingduang. Then came a month-long manhunt for the German fugitive.

Shortly after finding out about the Interpol notice, Thai police visited Fernsebner's home in a village in Nakhon Ratchasima province, where he was photographed selling chicken, Coconuts reported.

But he was nowhere to be found for a month. Chatchawan told Coconuts: "We waited for him for over a month after that. We had police staking out his wife's house, but he never showed up."

In mid-June, local residents told police that a foreigner had been frequenting an abandoned plot in the province, Coconuts reported. 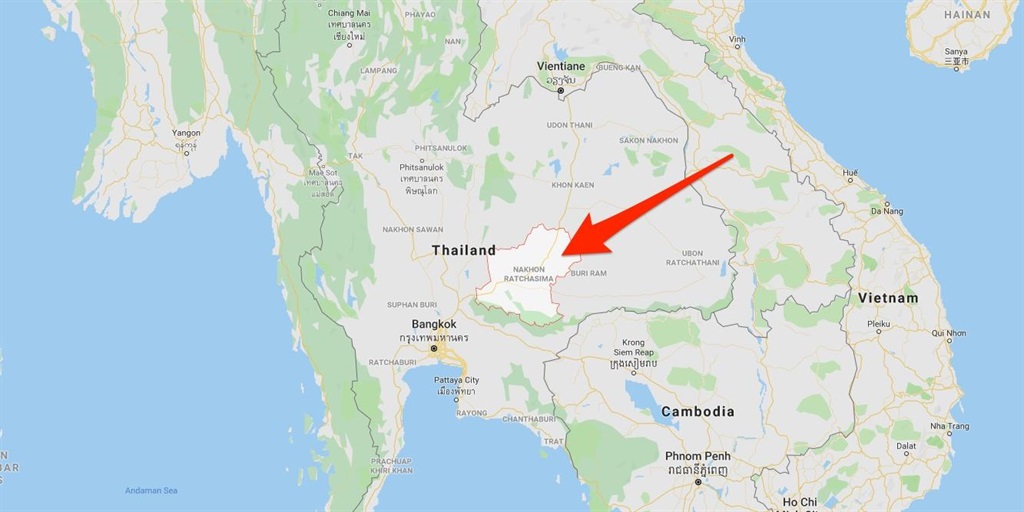 When police were dispatched to the area, Fernsebner fled into a nearby forest creek, where he used a plastic pipe to breathe underwater, DPA reported.

He eventually gave himself up to immigration authorities on the third day of the hunt, and was charged with illegal entry into Thailand and fined 6,000 baht (R2,000), the German news agency said.

Shortly before his surrender, the German embassy in Thailand told Thai police that Fernsebner had called his mother in Germany, and said he would turn himself in if a German embassy official was present.

He was later arrested on June 20 with both German and Thai officials present, Coconuts reported.

Fernsebner is currently in police custody, and expects to be extradited to Germany within a week to stand trial DPA and the Post reported, citing immigration and police officials.

His wife will not face any charges because she didn't know about Fernsebner's crimes before the police's search, Coconuts reported, citing Chatchawan.

Watch a video of Fernsebner and his wife cooking and preparing their grilled chicken here: