1. It’s Workers’ Day – but with Election Day now only a week away, there’s no rest for the, ahem, wicked.

Politicians are out in full force, with president Cyril Ramaphosa at an International Workers Day Commemoration in Durban, the EFF’s Julius Malema leading a May Day Rally in Joburg and DA leader Mmusi Maimane at a Workers’ Day function in Cape Town.  IFP President  Mangosuthu Buthelezi is in Empangeni addressing a rally.

A new bombshell survey by the Institute of Race Relations claims the DA's majority in the Western Cape is under threat and that, nationally, the ANC is in the balance at 49.5% (down from 54.7% in February).

2. Some 1,800 workers were trapped at a Sibanye-Stillwater mine shaft in Rustenburg. Yesterday at around lunch time, rails fell down a shaft and blocked workers from exiting the mine. By late last night, the workers were all safely above ground.

Final update: All 1800 employees who were underground have been brought to surface. #SibanyeStillwater

3. Steinhoff cut the value of goodwill and intangible assets in its accounts for the end of September 2017 by 1.8 billion euros (R54 billion) to 7.2 billion euros. The company has reassessed “the value of the goodwill and intangible assets of Mattress Firm Inc.” In 2016, Steinhoff bought the biggest mattress company in the US for $3.8 billion – as suspected at the time, it paid way too much for the firm.

4. South African exports increased by 7.5% to R105.4 billion from February to March, new data show. Imports were up 6.6% to R100.4 billion. This means that SA continues to export more than it's importing - which should be good for the rand. The currency was trading at R14.27/$ this morning.

5. Reuters reports that SAA has reached an agreement with its lenders to roll over $642 million of debt. This will give the embattled airline some room to get its act together.

20 things you didn't know about 'Game of Thrones'

After nearly two long years of patiently waiting, winter is finally here. The final season of "Game of Thrones" is now well underway, much to the excitement of fans everywhere. With pretty much all your favourite characters dead and plenty of loose ends to tie up (like who is going to sit on the Iron Throne), "GOT" season eight is shaping up to be one of the most thrilling yet.

Continue reading for 20 epic facts you definitely did not know about "GOT." Fans had to wait nearly two years for the final season of "GOT" to premiere - and post-production was one of the main reasons. According to HBO, season eight was in post-production for 42 weeks.

To put that in perspective, the first season of the show was in post-production for 17 weeks.

One of its biggest stars had hesitations about the role. Peter Dinklage has made a splash as Tyrion Lannister becoming one of the most beloved actors on the show. But it may surprise you to know that he almost turned down that role because he didn't want to be in a fantasy show.

"I had one hesitation, because of the fantasy genre, I told him I didn't want a really long beard and pointy shoes," Dinklage said in a Reddit AMA.

"[Benioff and co-creator Dan Weiss] assured me this character and this world wasn't that," Dinklage told Reddit. "They told me about his complexity, the fact that he wasn't a hero or a villain, that he was a womanizer and a drinker, and they painted a flawed and beautiful portrait of him, so I signed on."

The show has been filmed in 10 countries. While most people are familiar with "GOT"'s film locations in Northern Ireland and Croatia, fans might not know that the HBO production has filmed in eight other countries: Republic of Ireland, Morocco, Malta, Spain, Iceland, United States, Canada, and Scotland.

Many of these locations included real-life castles, which is why the sets on the show appear so realistic. It takes a lot of work outside live-action filming to bring "GOT" to life. In fact, there were 13,250 VFX shots in the first seven seasons alone. The work was siphoned out to 40 different visual effects houses in 13 different countries.

The number of nude people dropped drastically in the seventh season. Since the show first started, many have been vocal about its use of nudity and its sex scenes. But Broadly found out that the instances of nudity were minimal in season seven, down to just six, in comparison to 33 in the first season.

The cast apparently had to read scripts on secured iPads. Ian Glen, who plays Jorah Mormont, told BBC Radio 5 that production was so worried about paper scrips being leaked that they only allowed the cast to read the script from secured iPads.

"They're absolutely paranoid now about anyone finding out anything about the series and spoiling it," he told them.

The final season of the show had a huge budget. The final season of the show is expected to be epic, but creators apparently had a $90 million budget to work with over the course of the season. That means that the reported $15 million per episode budget soared in comparison to the $2 million budget in the second season.

There was a lot of fake blood used on set. Unsurprisingly, the George R.R. Martin-inspired show features plenty of character deaths, many of which ended in gruesome, bloody ways (remember the Red Wedding?). In the Northern Ireland production alone, "GOT" used 15,000 litres of fake blood.

And, although we're on the topic of impressive number stats, the show used 80km of fabric for costumes and 52,000 bags of paper snow throughout the eight seasons on air.

The sound of ice dragons is from drunk fans. It turns out Sound Designer Paula Fairfield had a pretty creative way to get the specific scream for the ice dragon Viserion. After Fairfield originally met a group of fans at Con of Thrones, she asked them to record themselves screaming, which they said they did after a night of drinking.

They met up again at a "Game of Throne" watch party at the Burlington Bar in Chicago and Fairfield let them know what she had used their screams for and they were overjoyed.

Pyrotechnics on the show were no joke. 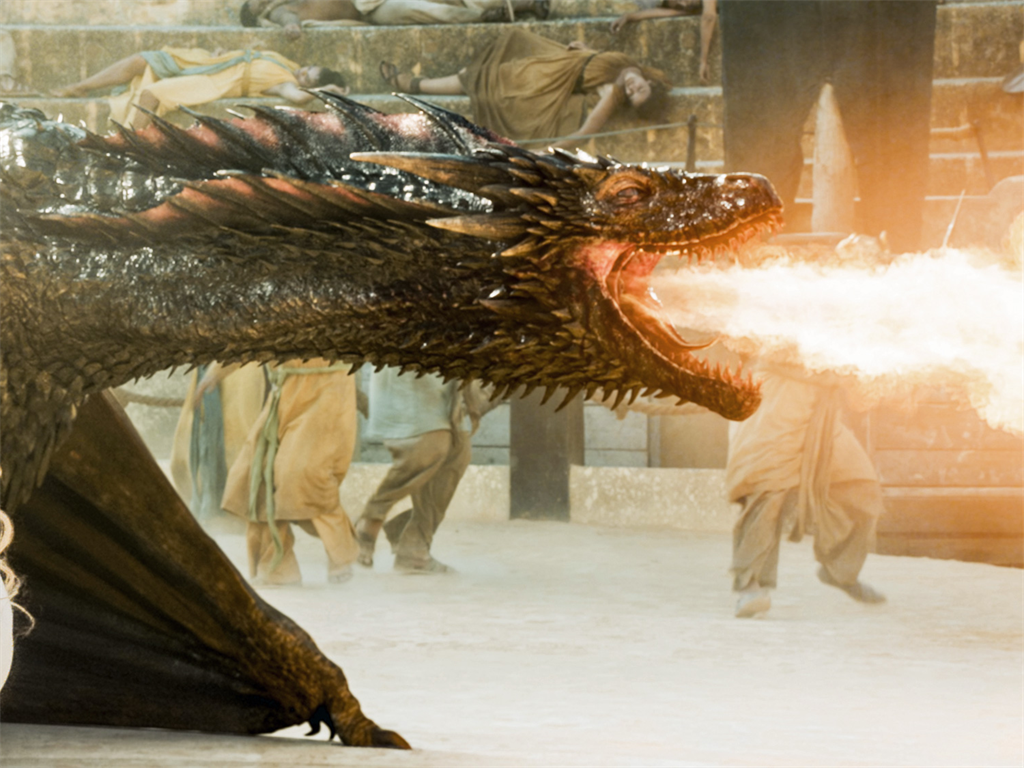 From fire-breathing dragons to wooden houses being blown up by Daenerys Targaryen, fire is a major component on the set of "GOT" and it turns out not all of it was CGI (computer-generated imagery).

According to HBO, the show used 163 tons of propane and 3,000 pyrotechnic effects during its eight-season run. They also used 500kg of powdered coffee creamer (yes, like the stuff you put in your morning coffee) for pyrotechnics.

The show has featured quite a few celebrity cameos. If you pay close enough attention, you'll notice quite a few familiar faces on the show. Some notable names who have appeared include singer Ed Sheeran who played a Lannister soldier, Coldplay drummer Will Champion who played a drummer, and band Sigur Rós who played a musical group performing at Joffrey's wedding.

Prosthetics took a lot of time. Major props to the special effects team on "GOT" that used over 11,000kg of silicone since season four to bring Martin's fantasy world to life. Reportedly, the costume prosthetics that took the longest to apply were for the Children of the Forest and The Mountain, which each took seven hours.

Here's a great video on the process the SPX team used to create some of your favourite characters.

One actor really skinned a deer. Macall B. Polay/courtesy of HBO

In the first season, when the audience is first introduced to Tywin Lannister (Charles Dance), he skins a deer. It was a bit unsettling to watch, partly because of Dance's general acting skills, but also because it turns out that he took it a step further and actually skinned the deer.

"That was a real deer. It was purchased from someone who sells stags and Charles Dance learned on the day how to skin a deer. You never would have known. It seemed like he'd done it his whole life," executive producer and series co-creator D.B Weiss told the LA Times.

It took months to perfect the Mother of Dragons' hair. Everything on the "GOT" set was done with precision and thought, including the different hairstyles for each character. Daenerys' vibrant blonde hair took more than two months to perfect and seven different prototypes. In total, the show used just over 12,000 wigs and hairpieces over the course of eight seasons.

Over 1.4 million still photographs were taken on set. Helen Sloan, "GOT"'s designated unit still photographer took over 1.4 million photographs throughout the eight seasons on set. For those who don't know, still photographers take photos on set that are often used in the press and for continuity.

This doesn't include the number of cast selfies that have been posted to Instagram through the years.

The show has won dozens of Emmys.

With over 132 Emmy nominations and 47 wins to their name, "GOT" has nearly surpassed "Saturday Night Live" for the most Emmy wins ever. With yet another Emmy season ahead of them, needs 18 more Emmys to tie "SNL"'s wins.

The show's viewership has more than tripled since its premiere. The show has an inordinate number of extras. According to HBO, the show had nearly 13,000 extras in Northern Ireland alone over the course of eight long seasons. The behemoth production also required thousands of crew members.

Maisie Williams kept her brown jacket from the set After filming her final scene as Arya Stark, Maisie Williams got to keep the brown leather jacket she sported on the seventh and eighth season.

The show likes to break records. With over 100 licences around the world, "GOT" is officially the most-licensed program in HBO history.

Other popular HBO shows include "The Sopranos," "Insecure," and "Sex and the City," for reference.